The Lost Art of A Good Letter 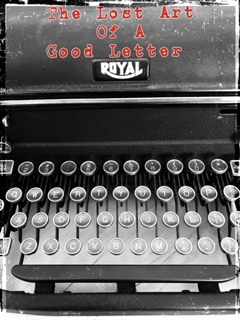 Happy February! Can you believe we’ve already crossed a month off in 2018? It’s been such a frosty winter here; I’m glad it’s a short month!

My high school sophomore daughter crossed a traditional milestone yesterday- receiving her class ring. I still have mine, though not worn in almost three decades, it’s a special keepsake. Our world is changing at warp speed these days and many traditions are falling by the wayside. One important “tradition” that has all but disappeared, has faded far too quickly: the art of letter writing. We need an intervention – a Letter-Writing-Revival! 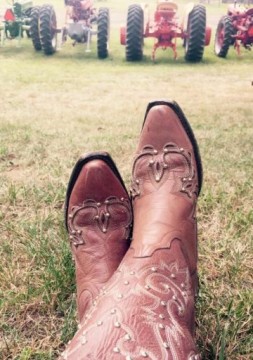 I’m a true-blue, apron-wearing, tradition-and-vintage-loving farmgirl, but I’m not a totally “off-the-grid” girl. I think there’s much to be said for many modern conveniences. Directionally challenged, GPS saves me from a life of never leaving the house because I’d get lost. At home, I’m totally into my snazzy red washer and dryer purchased last year. While I love vinyl records on a turntable and still have a few albums, it’s pretty cool to ask “Alexa” to play whatever songs my heart desires while cooking dinner. And honestly, I don’t know how my parents survived letting me leave the house as a teenager without a cell phone to check in with! Nowadays, I can’t imagine life without the internet. I love blogging, and without an online connection, I couldn’t have made some of the wonderful farmgirl friendships, forged through the Farmgirl Sisterhood Chatroom, and here on the blog. However, it’s with sadness when I think that many of the “Post-Millennial, Generations Y and Z,” will never know the reflection that comes with the now-seems-antiquated action of writing a letter, or the thrill of finding a real, stamped letter in your mailbox! A letter with a greeting, body, and a closing conveys true communication, compared to a quick text. It’s like eating a fine meal on beautiful china with silverware, compared to eating greasy fast food with your hands in your car from a drive-thru.

I learned to type in high school, and our school had one of the first classrooms with computers. It’s like being in two places at one time, knowing life before and after computers and devices became as common as indoor plumbing.

My daughter wasn’t taught cursive handwriting in school. She learned at home. I remember when, a few years ago, we were filling out a form together and she didn’t know what a “signature” was. Handwriting is as unique as a fingerprint. I love that I recognize my mama’s writing on an envelope before I even look at the return address, and my daddy’s handwriting is absolutely beautiful to this day! Handwriting is just that- it’s personal. With email and texting, our world is getting just far too impersonal. 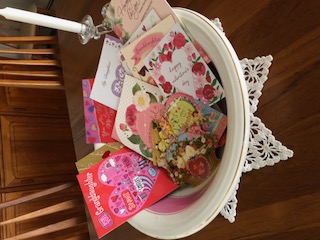 Cards and letters can be keepsakes, time capsules for the moment we received them. They can be read again and again. I like to decorate for the seasons, especially now in the cold bleak of February in a Connecticut winter. An antique basin with a pink stripe, found in a thrift store, currently graces my dining table- filled with special Valentines from past years, their messages still as sweet as they day they graced the mailbox.

Researchers suggest that the human brain can be rewired from constant use of electronic devices. We want more, faster. While an email can be personal, a hand signed card or handwritten note is even more so. Humans are moving at warp speed because technology is lightning fast. Email has made us type faster than we think, and the content is often sloppy and filled with grammatical errors. Texts are so instant, many times with “text speech”, filled with sentence fragments with no reflection or inflection. When we put pen in hand, we have to slow down a bit to put our thoughts and messages on paper. 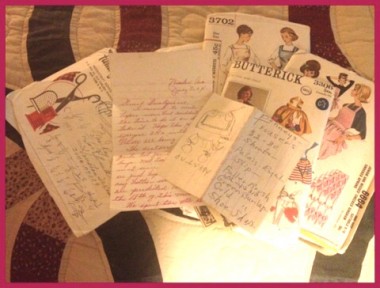 In an old vintage sewing pattern that once belonged to my grandmother, I found a handwritten letter from her baby sister, mailed in the 60s. Though I never got to meet her sister, the letter she wrote gave me a real sense of who she was. My grandmother kept that letter for decades. Read about the treasures found here. 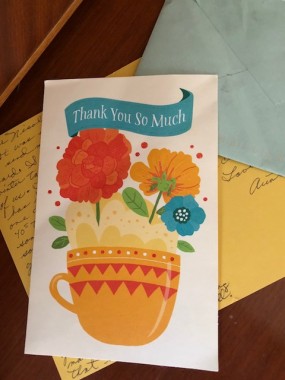 We lost my beloved aunt this past December. She would always send surprises in the mail…little gifts or cards, always with handwritten notes. The last card I got from her was shortly after we visited Houston in April. That note is a sweet keepsake of a wonderful, memorable day we all spent together. I will miss her letters and cards, and am so thankful I saved all of them!

When I was little, my mom would tuck notes in my lunch box. I did the same for my daughter. When she was little, she would also leave notes and drawings tucked all over the house where I would find them. 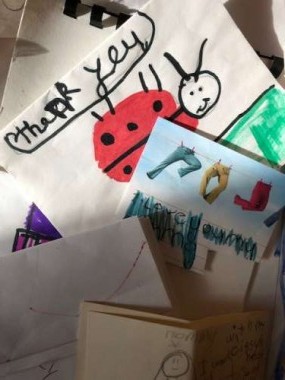 Now that she’s a teenager, we share a special journal. Every so often, we write letter entries back and forth, leaving the journal for the other to find. Sometimes it’s a reflection on a special day we’ve shared, or just for me to remind her how awesome she is! It also helps us communicate if there is a subject we butt heads on. Teen years are hard, and today’s pressures on our kids can be overwhelming! My daughter and I have always been especially close; I think our journal letters have made us even closer! 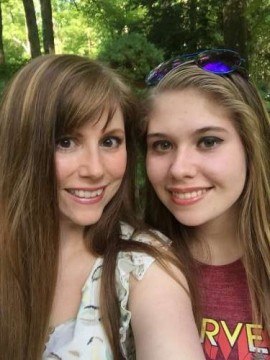 Last week, I received a surprise box in the mail, (along with a hand written note) from a very special farmgirl friend. Inside, was a little booklet written in 1959 by Golden-Age etiquette guru, Amy Vanderbilt titled, Amy Vanderbilt’s Guide to Correct Letter Writing, touching on everything from light-hearted friendly letters to business letters and formal invitations. 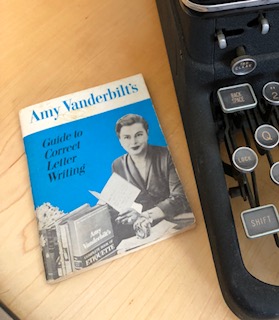 Though much of the booklet is outdated, some of it is still great advice (like sending thank you notes). My favorite line in the book reads, “The best {letters} sound like the person writing them”.

Here’s my February challenge: send a card or letter to someone special. It doesn’t have to be for Valentine’s Day. Put paper to pen, slow down, and send someone a little note. Text  messages aren’t forever…a letter is so much better!