Made Of Dirt And Proud Of It

Posted on May 30, 2012 by Ranch Farmgirl Shery Jespersen

Farmgirls know that while ‘love makes the world go round’, it is actually dirt that literally makes the world. Dirt settles on the ocean floor and is created deep in the fiery furnace of our planet. Without fertile soil, we’d starve. The word ‘earth’ has two meanings. It is a name and it is dirt! Dirt is where much of life begins. Even we originated via a handful of dirt in the Almighty’s loving hands. Lately, I’ve been getting pretty darn dirty. Ranching is a dirty lifestyle, but, like many of you I’m also a gardener. Nowwww, we’re talking dirt! Farmgirls like the smell of earth. Good, clean dirt has a sweet and musky fragrance. When someone refers to another someone as ‘down to earth’, it is a deep compliment. So, lets get dirty, shall we? 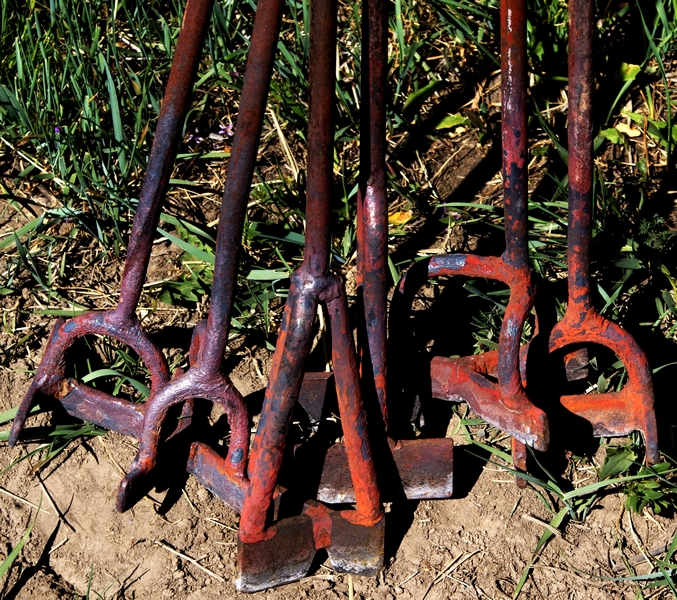 First, I joked awhile back that if I had an Indian name it would be “Too Many Irons” … in reference to the old western cliche, “I’ve got too many irons in the fire” … meaning if you’re in this predicament, the ‘irons’ get tangled in the fire because of overcrowding. However, my farmgirl pal (Anita) could drag me to death if I had to keep up with her. She purt’near did that the other day when I went out to their ranch to gather rocks for my garden yard. I picked up rocks that were extra pretty (lots of lichen on them) and those I could easily carry. She, on the other hand took twice as many to the truck as I did … and she was toting monster rocks like they were a loaf of bread. I was trying to keep up so that I didn’t look like a slacker :o) So goes our busy lives … juggling chores and to-do lists. I think it is a common habit among farmgirls — trying to squeeze as much as you can into a day.  Reminds me of the plate juggler who keeps adding plates.

On that note, let me take you out to the Shepperson ranch (Anita and Jerry) so that you can partake in one of the many rites of spring in this part of the world: branding day. It is one of the plates ranch wives juggle. Here is Anita … riding “Mac” (whom I bred) to gather the calves, her dog cooling off in the water tank, and the pond she built in their yard last year. She wintered the goldfish in an aquarium – they’re about 5″ long now. In addition to riding and vaccinating during the branding, Anita prepared several desserts beforehand so that they’d be ready to serve after their branding — including homemade ice cream (courtesy of her cows, Matilda and Daisy). 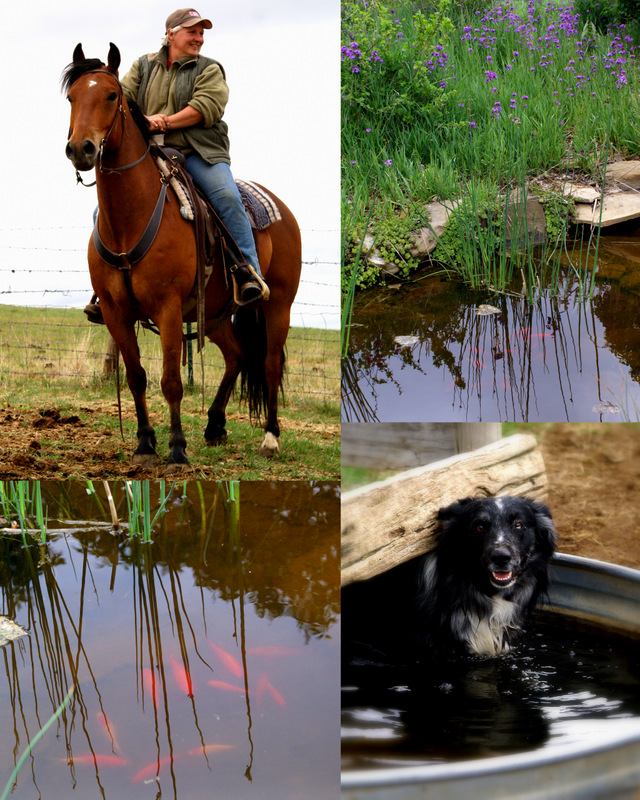 We also branded on this day — our cattle in the morning and Shepperson’s in the afternoon. We had a change of venue this year. Many of our neighbors were tied up with either their own branding or helping other friends. While talking with one of the young teachers who is also the new FFA director, my husband asked if ‘his kids’ might help with the brandings. So, this year, kids weren’t just on the fringe of our branding — we really needed them! And, they stepped up to the plate eagerly. I don’t have but one photo from our branding because I was too busy cooking and then transporting the noon meal to the branding site. Here it is: an apple pie right before I loaded it in a box to go. 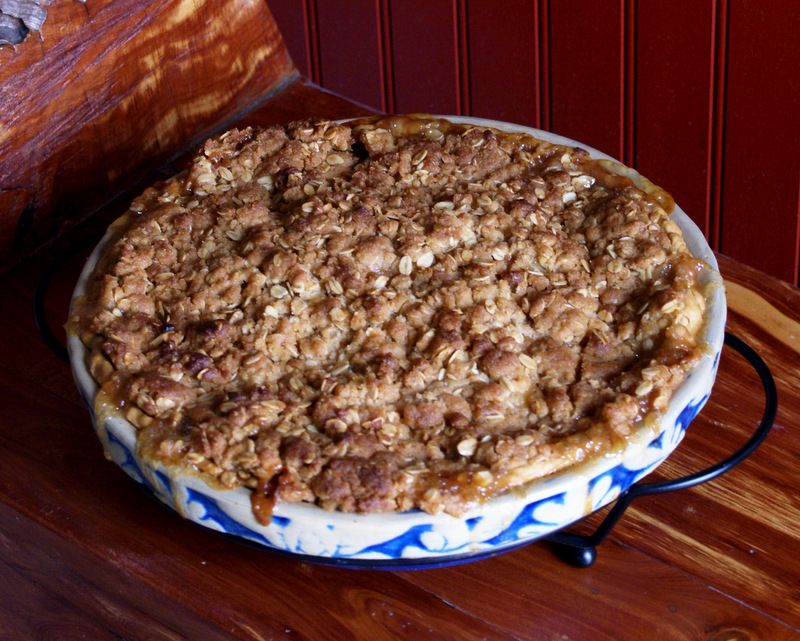 Ok, so, back to Shepperson’s branding! The cattle were gathered – pairs of cows & calves. Then, the pairs were worked apart. The cows received their spring vaccinations (in a chute/alley), then the branding of calves came next. 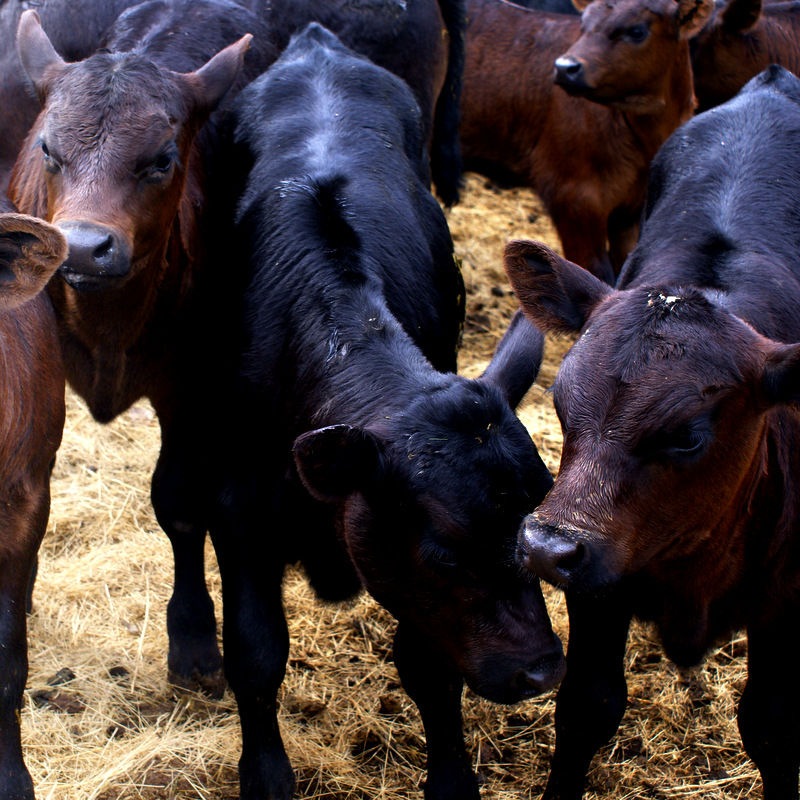 Meet some of the help at our brandings, the Upton FFA kids … the future of farming (ranching) in America … Wyoming to be specific. It was a muddy morning and corrals are nasty after a rain, but it didn’t bother the kids a bit. They wrestled calves with cheerful eagerness.

Now, I’m going to brag on the girls a little. They got game!! Over the years, I’ve noticed that when girls learn to wrestle calves, they master technique quicker than the boys (generally) and the reason is that females don’t have the same measure of brute strength as the fellas. So, for females it is especially important to do it right. Boys, on the other hand, often think they can muscle their way through it … only to find that a seemingly small calf can throw a hardy boy down as if he was a rag doll :o) Humiliating for boy. I saw the same thing happen on this day. But, once the boys figure out (and see the girls handily out-do them), they realize that muscle definitely wins … well-muscled calves that is. In order for a boy to win the wrestling match, he’s gotta get the timing and technique down — no different than the girls. Petite as Mackenzie is, she’s mighty because she does it right and she’s a very good athlete in general. When a particularly large (older) calf comes through, the girls might need a little help though.

Below: Kenneth wrestled and roped. The girls braided his horse’s tail :o) I remember when he was about three years old … and at a branding lunch. The kids had been playing all morning while the branding was going on and they were dirty, then they had lunch, dessert and watermelon. So, you can imagine what a boy of that age looked like … and he was sticky from one end to the other. My husband quipped to his daddy, “I think it would easier to just make another one than to clean that one up!”

Here are some other photos taken during the branding. My BIL, Earl … he has such soft hands when riding. He rarely tightens the reins on his horse. You can see it here. 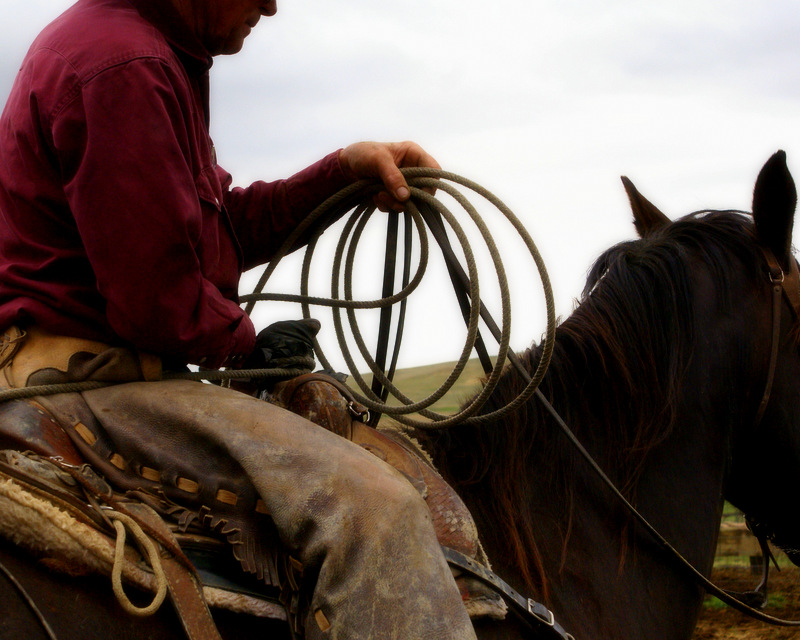 Here he is with his little brother, my husband, Lynn. Earl borrowed Lynn’s horse, “Chevis”, so that he didn’t have to haul a horse down here. Lynn is riding his youngest horse, “Peso” – age 6.

Lynn roped; the mud made for extra dirty jeans. You can see the mud streaks made with the rope on both his jeans and on the horse’s hind end. The kid’s pants were way worse — their rumps and pant legs were saturated with mud. I’m betting their undies were too ;o)

After the branding, Kenneth and Sean lived up to the ‘boys will be boys’ thing and had a little impromptu wrestling match. Oh, to have that kind of excess energy. I asked the kids to line up and let me take a photo of their muddy bottoms. Then, we all washed up and ate desserts. I didn’t need much of a clean-up since my job on this day was easy: taking pictures.

Down the road and back at our place, spring has sprung. But, this area is about a month behind due to lack of rain. We may not get to make hay this year unless May is a lot wetter than April. Yet, wildflowers are doing their thing, albeit the numbers are fewer. The other day when we branded a bull that we had just purchased, Mallow was blooming. They are the only true orange wildflower we have hereabouts. I think they’re one of the few orange wildflowers, period. Our brand is a one-iron brand and it is called a T6 … as the two are joined. A one iron brand is highly prized because it is much less time consuming to apply than a two or three iron brand. Our other brand was a three iron, a Bar Mill-Iron Bar.

The birds are ever so busy – nesting and raising little ones. There are now lots of ducks and Canada goose goslings on the water following their parents. 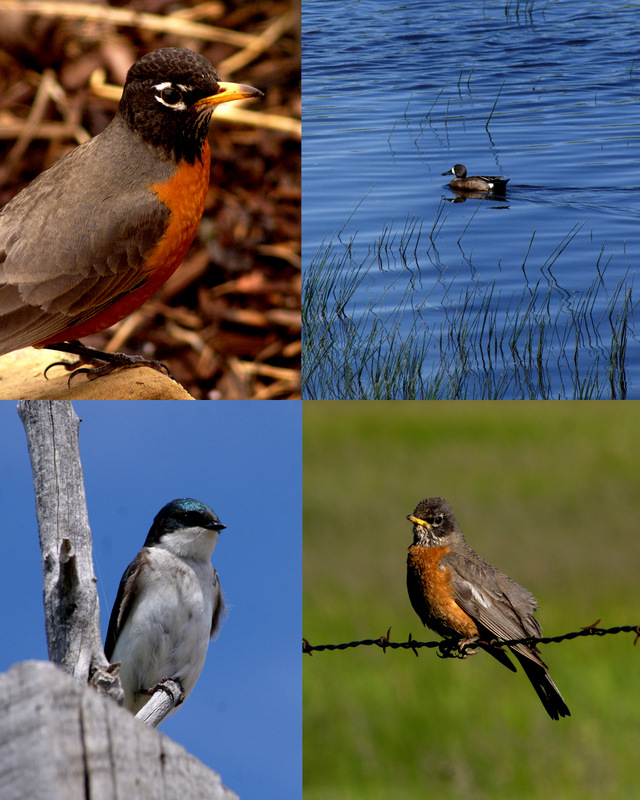 I’ve been madly trying to get my new garden-yard put together. What a lot of work. When I go to bed at night, I fall in. I wanted to show you photos of everything planted, but a blessed rain came and foiled ‘plan A’. BUT, if you’re a curious sort, I’ll post more photos this evening (or in the morning) as an addenda. My new garden yard is 13′ x 30′. A friend of our’s made barnwood panels, a potting bench and an ‘outhouse’ tool shed for me. Then, he, my husband and myself assembled it. After I get the rest of my things planted this afternoon, I’ll still have some decorative goodies to add as well as some pea gravel to place around the bottom perimeter. We moved the antique grain drill (aka petunia planter) and I’m planting a few trees & shrubs close to it also. If’n you have an interest, I’ll add to today’s post by uploading photos taken either this evening or in the morning. Here is where I left off the other day …

I’ll hang a couple of antique iron wheels from the top gate post – on both sides. 99% of the materials used are recycled — even the gate latch and handle :o) The boards were taken from a building my dear husband dismantled. The 6″ square posts were old highway sign posts.

So, this is where I’m going to put this session (focused on dirt) on “pause”, but, tune in tomorrow for an update! Our lovely on & off shower gave way to sunny skies, and with that, I’m headed outside to finish my planting so that I can finish this blog post! Hang tight dear farmgirls, I’ll be back in a jiffy … welllll, make that two jiffies.

I’m back! Here are the photos from this morning. I still have to plant the old seeder/drill (petunias and moss roses) and the whiskey kegs. I ran out of potting soil. I laid old window screens and tomato cages over the freshly planted seeds (carrots, beets) because one of my cats really liked that freshly worked soil ;o[ I hope I can find some more old window screens — they sure make good cover for hail season. I laid those large iron wheels over the kegs — thinking the flowers would look nice growing up through them. I had other plans for the wheels, but I thought I’d try this. I put the old hand plow in the tomato tank. It is cute, but easily in the way. So it sits in there with one of Michele’s birdhouses perched on it.

There is a yellow crookneck squash in the wheelbarrow. The old shopping cart is just a catch-all … like for spare pots etc.

I put scarlet runner beans in the teepee tub … and an acorn squash in the middle. Various sweet and bell peppers are in the low stock tank. I used parts of an old stove to plant a few flowers in. I LOVE geraniums and lobelia together. There are cucumbers in the other little tank — they can spill over the edge as they grow. I hope the morning glories cover the gate. I planted perennial flowers in the rock edged beds by the outhouse tool shed — lets see, black eyed susans, russian sage, delphinium, white pompom mums, tickseed, echinacea, gaillardia, blue sage, denver daisies, white daisies, blue anagallis (will reseed), and two different clematis by the shed near a trellis. I also planted a hardy ivy on the other side. It is a safe guess that maybe a third of the perennials won’t make it, so I over planted. I put one zuchini sort of behind the big tank so it can sprawl out and go where it wants to without bothering anyone else. Now the watering job begins :o)

I imagine ya’all are gardening too. Everyone has their favorites. I don’t have the space for much of what I’d like to have, but my must-haves are now in the dirt: tomatos, beets, carrots and lettuce (in the wash tubs). Summer is finally here … happy gardening everyone!