Adrenaline, it’s what allows us to accomplish great feats and achieve natural highs.  It also encourages our bodies to fight or flight in the face of danger.  It makes us feel alive!  Some people are adrenaline junkies…I am not one of them.  Sure, a little excitement is great.  I like the challenge of a black diamond while skiing or the occasional surge of energy when scared by something silly.  I’ve even sky-dived and cliff jumped just for the experience.  However, I am not one to go out chasing that rush of hormones. 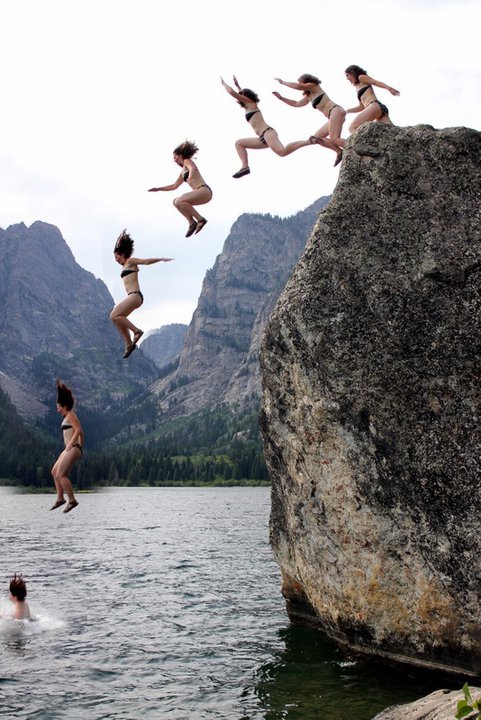 Me cliff jumping in Grand Teton National Park several years ago. Evan made the cool picture!

Have you ever gone cliff jumping?  I went once, in Grand Teton National Park.  I would love to do it again!  It was very, very exhilarating.  The experience is one familiar to many, I suppose; and it can be applied to many challenges we face in life.  You go to the edge, ready to jump, to take it all on…but you pause and hesitate.  That hesitation scares us back away from the edge.  We build ourselves back up again, convinced that this will be the right time to act.  We ask a friend who has jumped the cliff before to do it before us, to give us some confidence in its safety and “doableness.”   They jump as if they’ve jumped in their sleep (maybe they have!).  We are ready, again.  We step to the edge and are about to take off, we wind up, feel the spring in our step and the wind on our face and we!…step back and freak out a little bit more.  This might happen many times before the jump is completed, if it is completed at all.  There is this little nagging voice that implores: “Wait! Wait!  Do you really want to do this? What if you can’t come back from what happens when it’s done?” 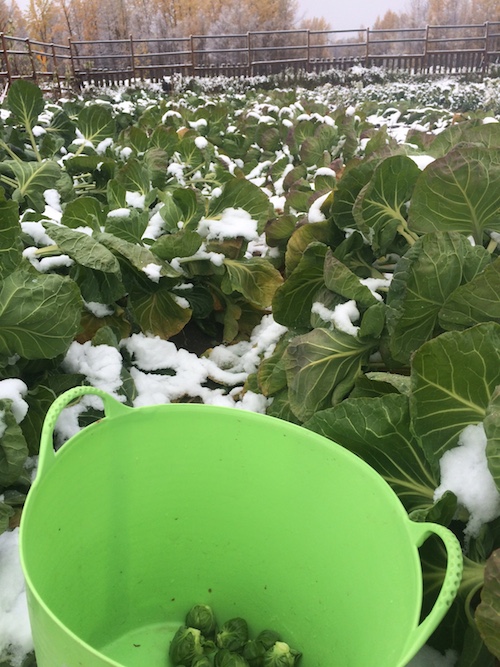 harvesting brussels sprouts in the snow for our last CSA.

The last two weeks have been a bit stressful for this farm girl…We finished up our market season at the farm, we’ve been packing up and moving, and I totaled our “good” car in a fairly traumatic accident (not a collision, and not with Ava, thank goodness).  Long story short: I got lost on my way to a friend’s house (in rural Alaska) and ended up driving through a giant puddle on a small dirt road.  My car died in the middle of it, and I got out into knee deep water which I slipped in getting drenched up to my chest.  I was out (seemingly lost) in the middle of nowhere, my car was dead, there was no cell reception, it was cold, I was soaking wet and pregnant, and I was really scared.  Luckily, I was closer to my friend’s house than I thought and I finally got a signal after running on the road from the direction I had come from. She rescued me within twenty minutes of the incident. The car is toast, but I’m alright and we have insurance to cover our monetary losses.  It was one of those events that made me ask myself many “what if?” questions.

I felt sick after the adrenaline rush that came with that event.  I almost felt like I was going to have an asthma attack!  This was not the good type of adrenaline, this was the survival kind.  Even writing about it now makes me buzz a little bit.  Ick!

Okay, so that happened, and I’m getting over it.  I will be fine and my family will be fine.  All of that occurred because I was supposed to help my friend butcher the 35 meat chickens she had raised for her family and mine.  However, the day was really rainy and cruddy and everyone was fighting off colds.  So, we postponed for a week.  I had a whole free day!  And then I spent the day wet and scared and out in the boonies. 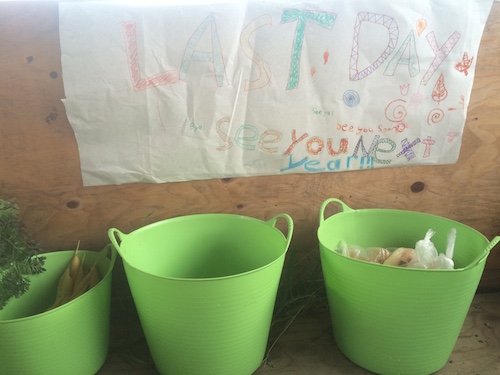 A banner the kids made for the last day of the farm stand. 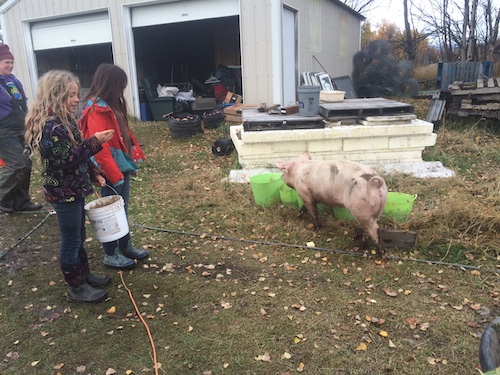 An escaped pig! a lot of the animals have been escaping with the impending winter!

We rescheduled chickens for this week and we started yesterday.  My friend, Melisse, is also a farmer and has a son who is two weeks younger than Ava.  They are so cute together!!  Evan has been watching the kids while Melisse and I do the dirty work.  It’s quite the production for two people to butcher 35 chickens!  We have a pretty good little assembly line going on.  Melisse catches the chickens, holds them upside down to subdue them and puts them upside down in the kill cone.  She has done most of the actual killing of the chickens.  We then move them into the hot water bath to loosen feathers, then into the plucker for de-feathering.  I then take over with evisceration, cleaning and bagging. 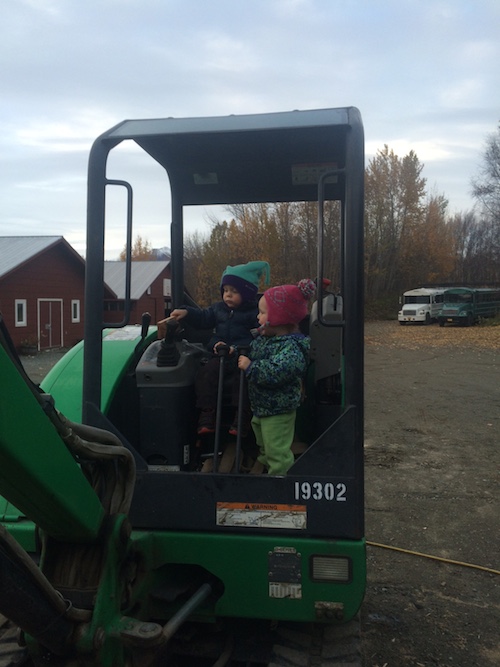 Ava and Porter play on a digger. Cuties! 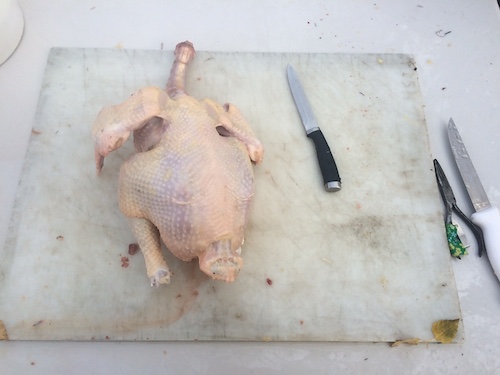 A cleaned chicken ready to be bagged.

I’m coming back full circle to the cliff jumping thing.  Up until yesterday I have never intentionally killed anything (well, maybe just a few million mosquitos).  Honestly, I didn’t think I could do it.  I really do feel like I should be able to, though, if I’m going to eat meat.  I was vegetarian for awhile, but have been eating meat for the last several years.  Ideally, I eat meat that I’ve known in some way or another, although I don’t always stick to this.  Anyhow, I feel like we should be able to kill the meat we are willing to eat, and it was the one thing I hadn’t been able to do until yesterday. 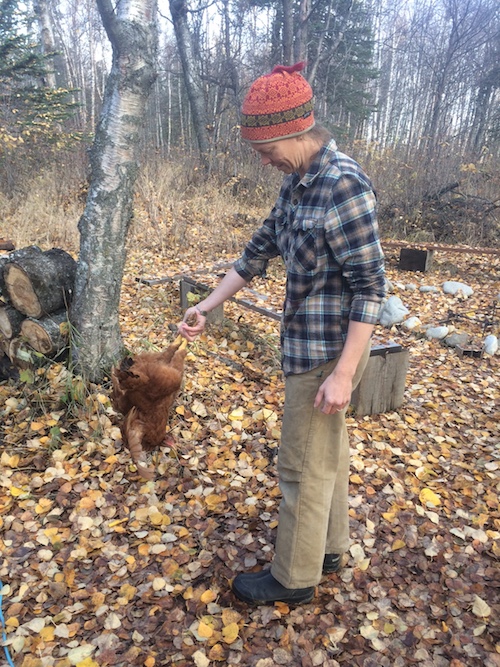 Melisse calming a chicken down by gently swinging upside down. They seemed to like Jerry Garcia and David Grisman singing, as well.

I was prepared for it to be traumatizing.  I expected some kind of internal struggle with taking the life/lives of some living beings while nourishing the growing life inside of me.  I kind of wanted some epiphany or life altering thing to happen in the process of making this fairly drastic jump in my life.  Melisse reminded me that I would not need to kill any of the birds if I didn’t want to, but I did want to somewhere in me. 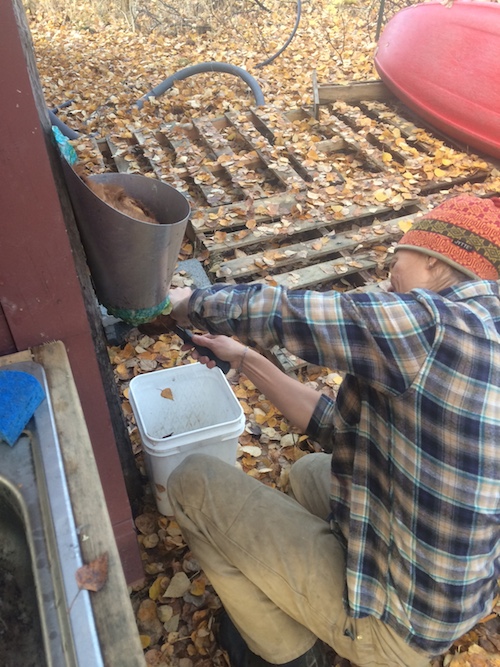 Thank you, chicken, for our future delicious meals.

It took me a few tries to do it–to make the jump into killing another warm blooded creature.  At first I couldn’t even watch, then I progressed to watching, and then hearing the description of how to do it.  Then I caught a chicken and calmed it down into the cone.  I had the knife in my hand.  I had the chicken’s neck in my other hand.  The rooster looked me in the eye with his pretty brown eye, and I swear he looked at the knife; I couldn’t do it, I chickened out (this is where that phrase should come from).  I was buzzing with adrenaline again.  It took another few chickens before I could do it. 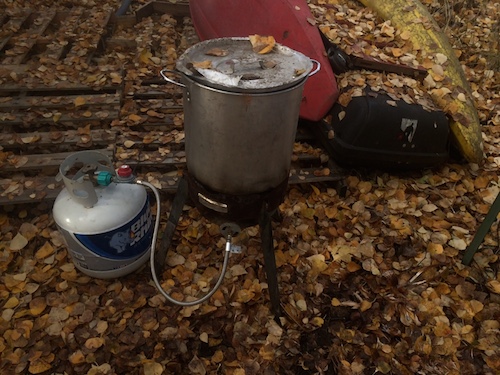 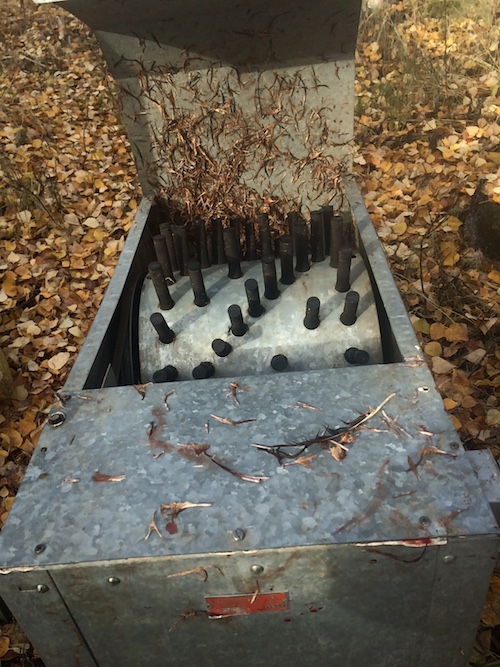 The electric plucker saves a lot of time.

I did it when Melisse had gone inside to check on Porter so I was alone.  I caught a chicken and started crying.  I told him that everything was going to be alright soon.  I thanked him for giving his life to keep my family healthy and strong.  I told him to relax, and I rocked him back and forth until his eyes started to close. I put him in the cone.  It was all over fairly quickly.  Worry that I hadn’t done it correctly rushed over me.  But it was all over soon.  The rooster was no longer in there, it was not just a hunk of meat that needed cleaning. It’s amazing how, once the birds are dead, I am totally okay with handling the body.  However, I didn’t really get a wave of anything mind altering or poetic…which was mind altering in its own way.  It kind of felt like when someone asks you if you feel older on your birthday…did I feel different?  Not really.  Just another tick on my list of farm girl accomplishments.

I felt a sense of calm and acceptance with it all:  With the cycles of life and death, with our purposes on this planet, with the struggles we all face in different ways.  I was happy with myself for accomplishing this feat (jumping off of the metaphorical cliff) at the end of a stressful couple of weeks, but I was sad it had to come at the loss of another being.  It wasn’t easy by any means. I ended up only doing two out of all 35. The most satisfying part of it all is that I know I’m going to eat chicken regardless of where it comes from; but I know that these chickens were happy, well fed, free to be chickens for the short ten weeks that they existed, and they were treated with respect when it came to the end.  This is  much MUCH better than most of the chickens we eat get, and I think we should all strive to source meat that is grown and butchered like this.

I know many of you will not be able to understand how I could take the life of another being.  I’ve written of harvesting chickens before with some backlash, but this is the reality of eating meat!  It is often the reality of eating produce, as well (if it is grown on an animal integrated farm).  Someone has to do it, and I’m proud to say that I am among those someones, now.

We are eating chicken dinner tonight, chicken that we have known and treated with as much respect as a meat animal can experience. 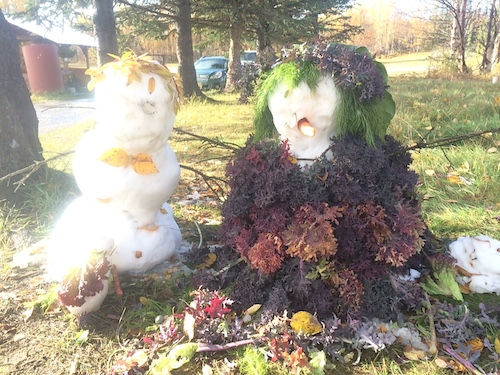 A very festive snow bride and groom. I love the kale dress on the bride!

This was a rather sobering post, but seems fitting for this autumnal transition into fall and winter.  Time to make peace with things that must be lost to help us all make it through the winter.

Until next time, sending you peace and love from AK,