The Groove: Getting into It

Okay Farmgirls, I’m getting into it: the groove of new surroundings and new digs.  I also have a little disclaimer: I’m getting over the flu…so this might be a bit disjointed/uninspired.  I’m sorry, but please send me some healing thoughts to chase this headache and these body aches back to where they came from (not a nice place). 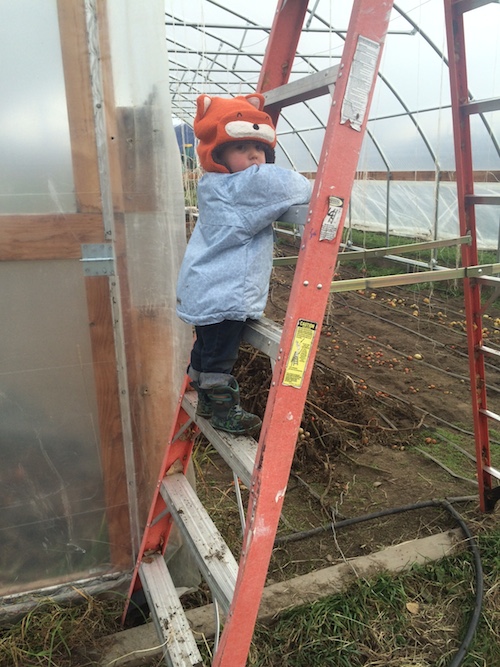 One of our last working days on the farm this season! Preparing to take the plastic off of a high tunnel. Ava is a daredevil on the ladder.

After a fairly stressful late September/early October (a bit about that in my most recent post), I have enjoyed over a week of relative relaxation.  Moving is hard and stressful, it is a universal truth.  Tensions run high, we eat terrible food, our bodies get tired from lifting and our minds fatigue after too much organizing and decision making.

When we first started the talk about moving from the yurt to the city, I had this pipe dream that we would do it slowly over several weeks.  We’d have the luxury of packing everything up properly–i.e. We would not be moving any miscellaneous boxes of “I don’t know what to do with this right now, but it fits in this box! tape it up: go! go! go!” To be fair, I describe these boxes in fewer words, they are labeled with descriptive words like “stuff from bookshelf” and “things on dresser” or the colorful, obviously fed up “box of (insert four letter word here)”  These boxes end up staring at us, menacingly, begging to be unpacked and organized…we stare back and think, “Why didn’t I deal with that when packing it up? Argh.” 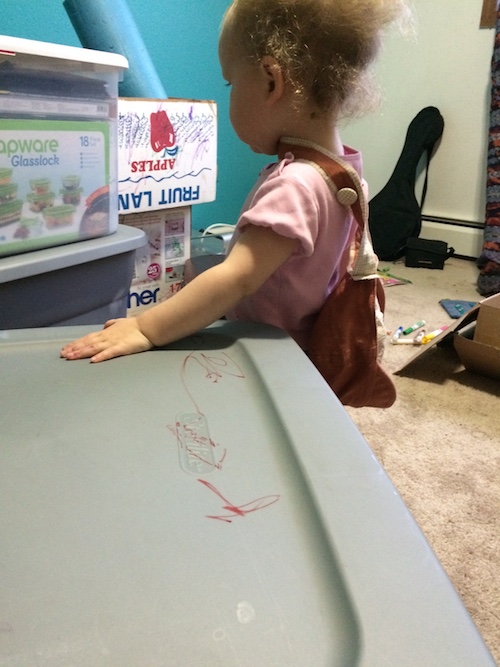 Ava labeling boxes for me. I think her handwriting is more legible than mine.

Anyhow, after we lost our good car, we decided to move everything ASAP.  We scheduled a moving truck for the next day (a little impulsive, I know).  We had packed up about four boxes at that point.  So, packing up the truck was a bit hectic, but luckily we had some good friends help and it actually ended up going pretty smoothly.  However, I ended up with the dreaded boxes of miscellaneous stuff. 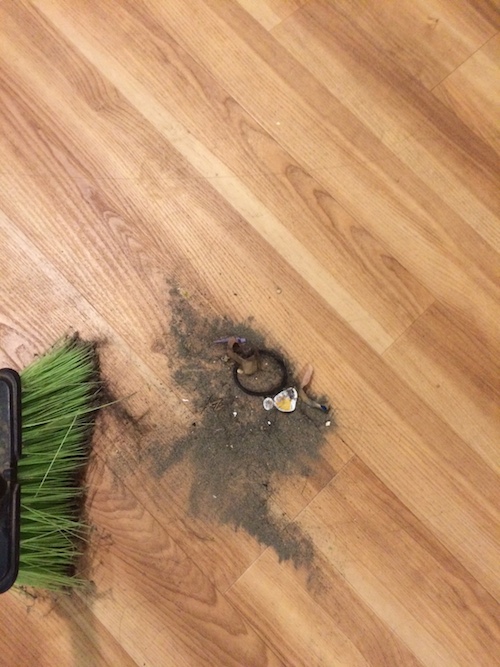 Look at what the dog dragged in! I swept this up just four hours after I had already swept. I guess you can take the dog out of the country but you can’t take the country out of the dog…

I’ve taken it upon myself to unpack these boxes slowly and methodically.  At first I was overwhelmed by it all, but just kept reminding myself: one box at a time.  Some people unpack everything the day they move, others take years.  I fall in the middle.  It’s been a couple of weeks and all of the cardboard boxes are EMPTY.  Victory!  Now, there are still some plastic bins that need to be sorted, but they don’t feel as oppressive as cardboard boxes for some reason. 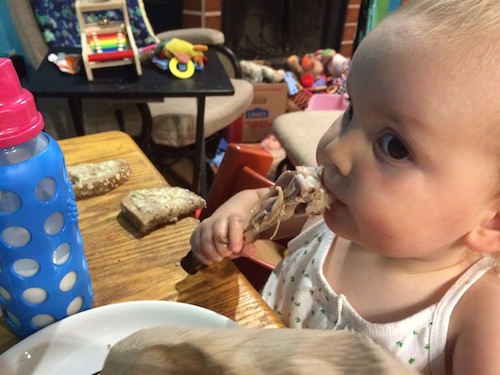 Taking time to eat some delicious chicken that we processed ourselves. YUM!

Of course, just because the boxes are empty doesn’t mean that what has come out of them is organized, but it’s out and filling our space–making it feel like we actually live here.  For my sensibilities it works like this: unpack a few boxes, place items where we feel they should go, clean up a bit, live in the newness for a day and move items/furniture around until it feels right, repeat. I’ve been trying to keep the troops happy while unpacking, as well.  This means playing with Ava a lot, walking the dog, preparing good food and attempting to keep the common areas clean.  Ava “helps” unpack which adds on a lot of time, but I’m just going with it.  It’s cute, it keeps her happy, and I’m really in no rush.  It’s been working for the most part even if it is a bit slow.  The art isn’t up, there are some errant piles here and there(we have so many books!), the contents of cupboards continue to shift as we find the “right” places, and plenty of clothes remain unhung.  However, we are all remaining sane.  We are getting into the groove of city life and non-yurt life.  The first few days of taking walks here were nerve racking–the dog isn’t used to traffic and either are Ava and I, but it’s getting exponentially better. We’ve found some excellent walking routes and local spots to pick up a yummy treat. 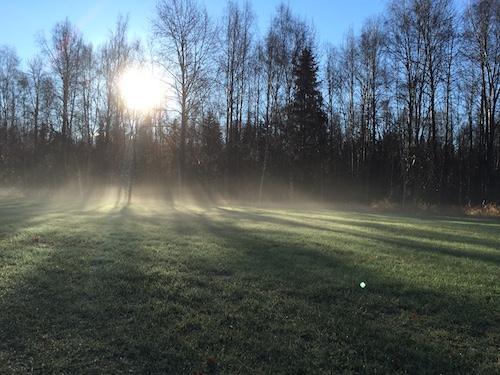 A nice field nearby where Moki and Ava can both be free to run…as long as there aren’t moose around.

Oh, and having a dish washer is proving to be as amazing as I’d hoped and expected.

It has felt good to just go with the flow and release some of the stress I had been harboring.  What’s the point of being stressed out about unpacking?  I guess stressing out would mean that we’d be done by now, but I think it would have been at the expense of some levels of happiness and health.  Let’s see how long this laissez faire attitude sticks around.  I’m liking it for now.  Hopefully it sticks around longer than the flu.  Laissez faire attitude also means I’ve taken dreadfully few photos…sorry!  I will get some when we we are all moved in (might be next year! haha). 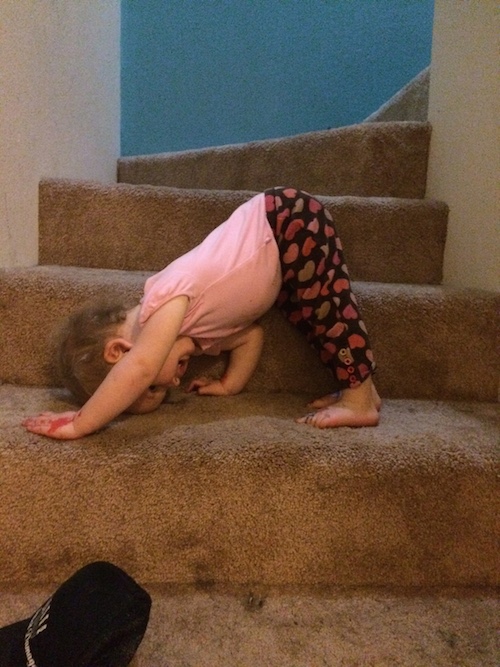 Thanks for reading, hope Halloween treats you all well and this finds you well and happy.

Alex, the Rural Farmgirl (living in the city)