[Previous Suburban Farmgirl, October 2009 – October 2010]
Have you ever seen the motif of a heart nestled inside the palm of a hand? I love this little image because it captures my heritage so well: I come from a line of women whose hearts lived in their hands. At Christmas, especially, their handiwork fills my house.
A couple of posts ago I wrote about Christmas decorations. Last night we trimmed the tree! Almost every ornament is handmade by 1) These amazing women in my family, 2) My kids (I once wrote a column in praise of clever teachers, Brownie leaders, and Sunday school teachers and the wonderful ornament crafts they think up!) or 3) Other craftspeople (whose ornaments I’ve bought as souvenirs or received as gifts).
Uh, notice my own name is absent from that list?! I can’t make anything! How is it that some people just miss out on the crafty gene? 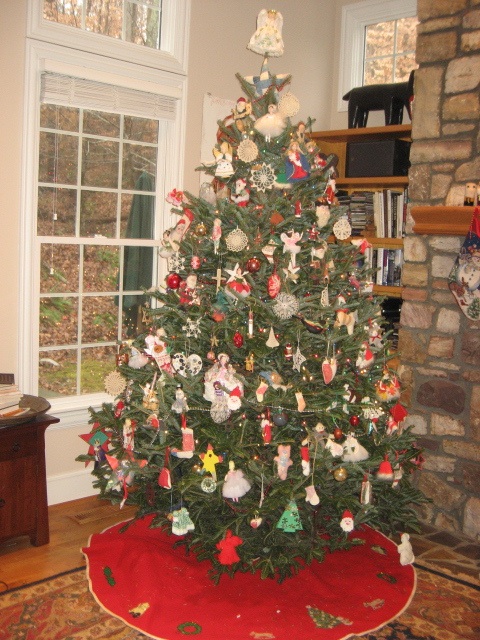 Not that I let my craft-clutziness stop me from admiring and appreciating other people’s handiwork! To the contrary, I’m agog with enjoyment! If you can make something – anything – I hope you share it with those you love. (I can make words and Christmas cookies but nothing worth hanging on a tree!)
Here’s a quickie guided tour of some of my favorites, closeups from the tree picture above:
This is a star my Gram crocheted, along with the Poinsettia Dancer made by Gladys Boalt (I started collecting her Nutcracker characters years ago when I was charmed by discovering one in a New York City shop…when they were cheap.) 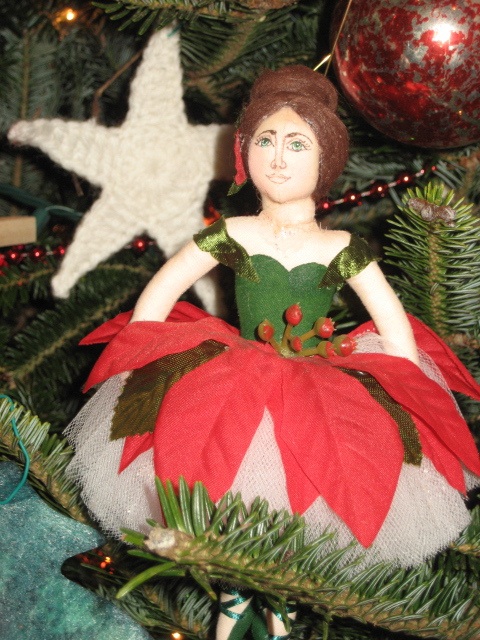 This rocking-horse made from an old quilt is one of my few blue ornaments because it’s my favorite. (I’m partial to red, green, and white on the tree.) 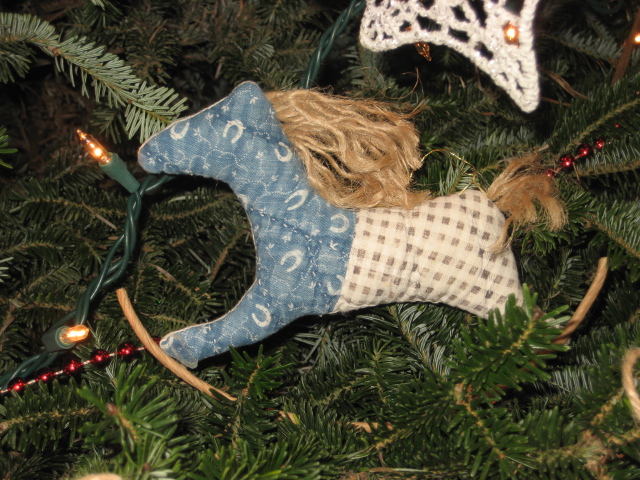 Here’s the beauty of simplicity: A cardboard heart onto which my daughter glued buttons, for a preschool project. (Other great school ornaments: A wire molded into a heart shape and tied with a ribbon, a baked tree (vintage 1994, unfortunately some of the others were bitten into by younger siblings over the years!) 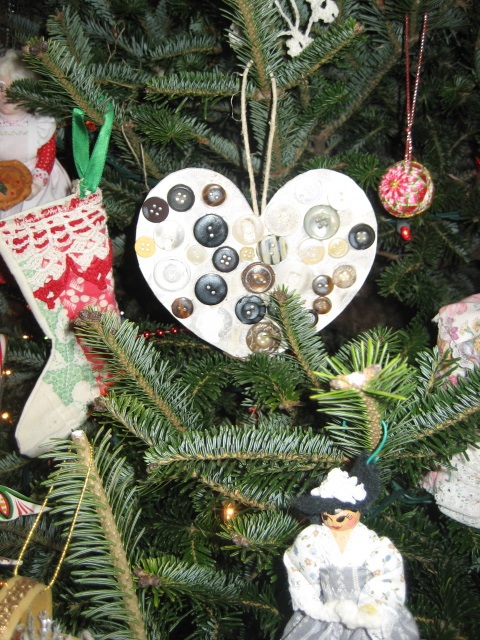 A clothespin doll made by my Aunt Helen (of doll fame from my last post!) and a heart made from an old quilt, like the rocking horse, bought when I lived in Tennessee: 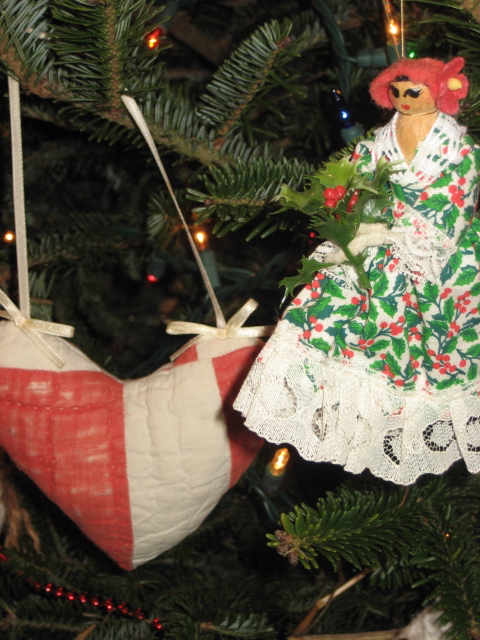 And here’s a grab bag – including (it’s like those I Spy books, see if you can spy them!): A temari ball (child’s toy made from wrapped threads by the mother of my Japanese friend Emi), a cornhusk Santa, crocheted bells, stars and snowflakes (made by my late Aunt Stella and also bought in a Budapest street market), the aforementioned spice-cookie tree, a dyed-paper leaf (another preschool winner!), a tiny gingerbread man, a starfish Santa from the Outer Banks, and more Gladys Boalt people. 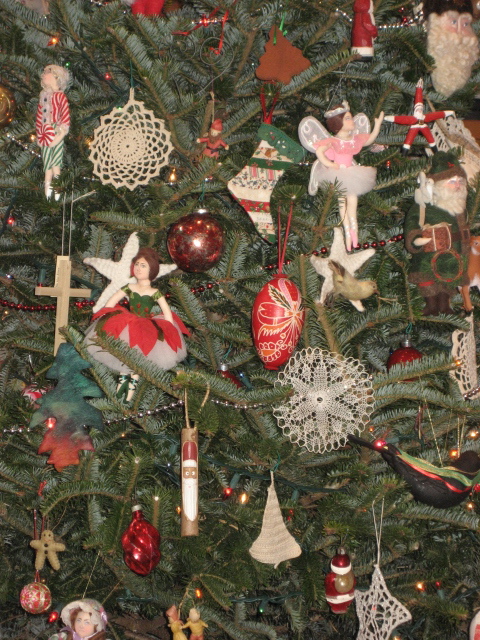 As for me, I lack the patience, the eye, and the GIFT of crafting. (Is it a gift, or a learned skill? There’s a good debate. Lazy and easily-intimidated-by-a-glue-gun me says GIFT!) I peaked in the 1970s, when I fashioned these Three Kings out of toilet-paper tubes for my Gram. They’ve lost some crowns, frankincense and myrrh over the years but I haul them out anyway. Because, hey — the beauty of handmade things lies not in their perfection but in the vision and heart that went into them in the first place. 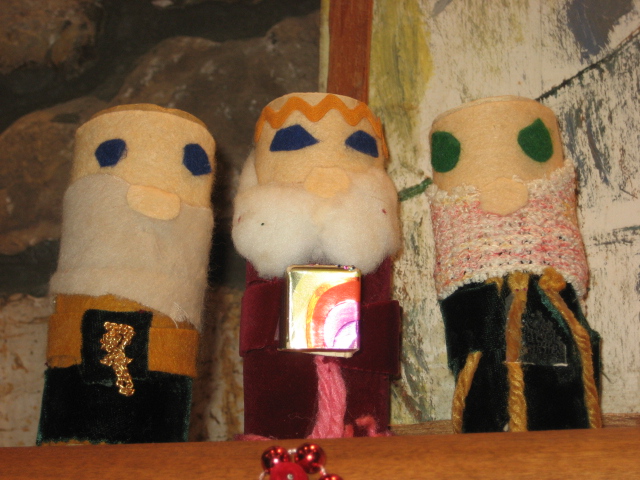 Ah! I thought of one other “talent” I have. In my earlier post about decorating, I neglected to mention paper snowflakes taped to the windows. I can snip snowflakes out of white printer paper – a welcome change from what I usually spend my time doing with printer paper (printing words!). Going to get that project underway soon…
Meanwhile in another clever decorating idea, my uber-talented cousin Dennis used to make and send “Christmas card ornaments,” a different one every year. Here’s 1994 – which expresses my sentiments to you all for 2009: 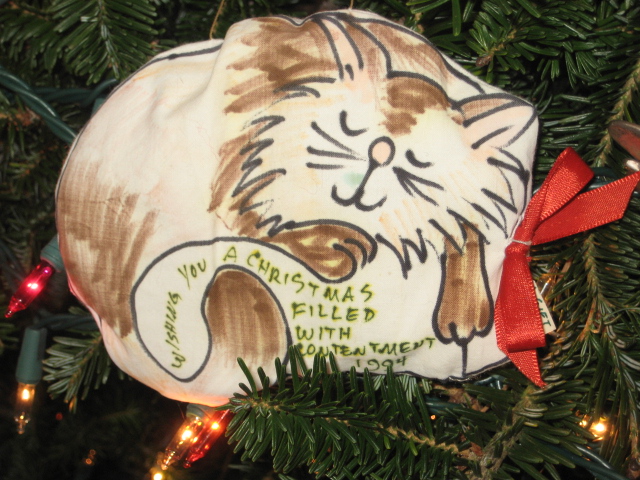