August is when things come together. It is harvest time … a month of hot days and cooler nights … when corn can be heard growing and when fruit on the ground, on the vine and in trees ripens. Gardens fill canning jars for the pantry and for the county & state fair. Amidst all the other things that make August a very full month, this is Fair time. I’ve got a lot of ground to cover and “fair time” is the first stop on our scenic tour of August.

Since the mid 1800s, America has loved going to the fair! In some cases, especially out here in the west, there were fairs in places that were not yet states. Nebraska, for example, held their first “state fair” before they were officially a state. The first State Fair held here in Wyoming happened in Douglas in 1905, but a state-like fair had been taking place annually since 1886 near Cheyenne and Sheridan. In western states, a rodeo has to be part of the fair! For obvious reasons, horse racing was a very early entertainment offering at fairs. Light horses were raced under saddle and in harness. Heavy draft horses competed in pulling contests and the like. Horses also competed in halter classes – a class that judges the overall quality of the animal. Rosette ribbons awarded to the finest fair entries and fair animals were coveted.

The very first State Fair took place in New York in 1841. The New York State Fair dates back to the founding of the New York State Agricultural Society in 1832. The first members of the society were farmers and legislators keen to promote improved agriculture in the state. Nearly 15,000 people visited the fair to view agricultural events such as plowing contests, exhibits of animals, farm equipment, produce, etc. In the years that followed, fairs were made more attractive to the general public by adding entertainment events … and prizes! The prizes varied from toys to chalkware figurines, dolls, stuffed animals and the list goes on. “Carnival” glass acquired the name when mass production of pressed glass was made possible in the late 1880s. Because of the lowered cost of manufacturing, the iridized glassware became popular as fair & carnival prizes. Carnival glass was mainly produced in America from 1910-1930 and the first color to be introduced was amber.

One hundred and sixty years have passed and although technology has changed our culture dramatically, the old fashioned fair remains much the same – thank goodness. Goodness is what the fair is all about. You take your best to the fair, you see the best at the fair. The fair brings out the best efforts in all who participate. Although there is a lot of entertainment at the fair and many more classes have been added over the years, it is still first and foremost about agriculture.

The idea of winning a stuffed toy for your child or sweetheart at a fair carnival booth is an age-old tradition. There were/are lots of ways you can try to win prizes: tossing coin tokens in glasses of water or rings over bottle necks, throwing baseballs at a stack of wooden milk jars, shooting “swimming”metal ducks with tiny rifles, etc etc. Check out the mohair teddy bears in the booth above (very early 1900s). I enjoy making historic looking bears and I would love to have one of those teds!

I have a 1940s model of a wildly popular prize that came in many versions and sizes. Pot metal horse figurines clad in fancy western gear could fit in the palm of your hand or perhaps your dad might have won a ten inch tall horse for you. The fanciest model horse prizes were mounted on a wooden base and the horse stood next to a horseshoe shaped clock. America reinvented the horse in the early 1900s as a recreational animal. Those old pot metal horses were beloved by children and adults alike for a reason: people were horse crazy all over again. My figurine is just like this one; I had to have it because it is a Morgan Horse!

Do you have childhood memories of the fair? Did your mother or grandma enter baked or canned goods? Quilts? Crochet or knitting? Garden produce?Flower arrangement? Or??? Here, let me stir up your memory. Go to this YouTube link and take a listen to one of the song videos from the 1945 Rodgers & Hammerstein film, “State Fair”. The movie clip also features an early example of what we farmgirls now call “Glamping”. :o)

Several years ago, I entered my chickens in the county fair. My bantam Cochin rooster won “Best Of Show”. A couple of years ago, I entered photos and did well. I donated all the ribbons back to the fair except for two: The coveted black & white “Judge’s Choice” rosette (for a photo) and my rooster’s champion rosette. With the mention of this last detail, let me show you a new one at our county fair that was going on last week. This will bring your fair-time field trip into the present. 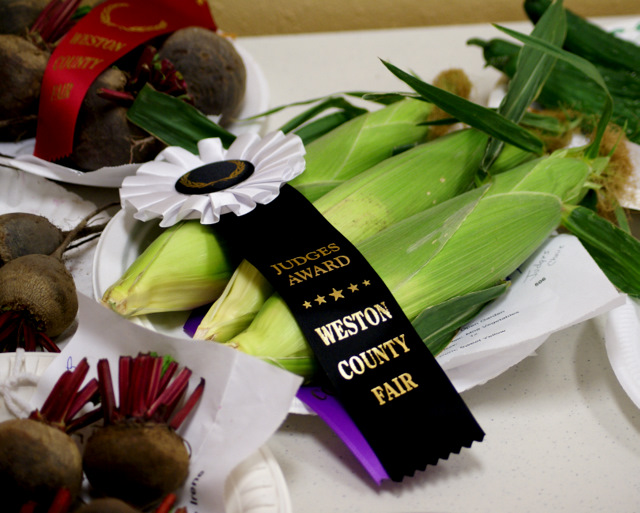 My husband has a very small FFA corduroy jacket (his) hanging in the back closet. Fast forward: He then became a “fair dad” (three daughter’s worth). He was the local 4-H Club “horse leader” for many years. His girls participated in several 4-H categories, but, since they were ranch kids, they dedicated much of their 4-H work to their steers and sheep. It cannot be emphasized enough how hard 4-H kids work on their livestock projects. It is a months long process. Talk about learning how to be responsible and consistent. Most kids get to keep the money from the livestock auction at the end of the fair (when their animals are sold). Their many months of work literally pay off. It is not all work though, they have a lot of fun. Nothing beats a huge sense of achievement. It is very rewarding when they get to show off their perfectly groomed animals to an audience. 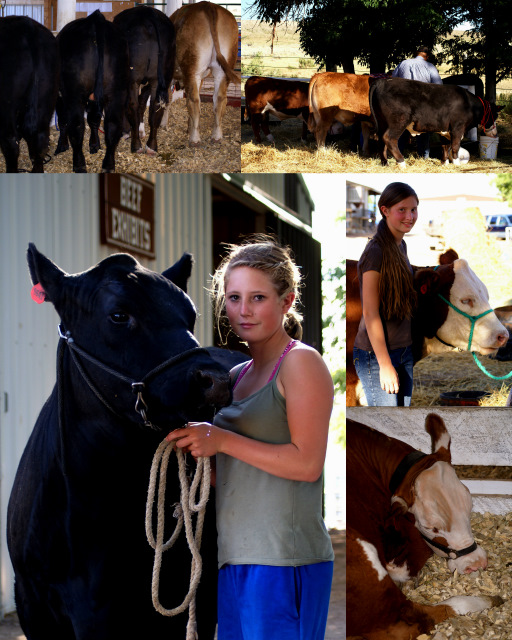 Before the animals are shown, they are bathed, trimmed and groomed to the enth degree. Front to back, top to bottom … every inch, every part of the animal … and, yes, the parts that can get messy at the last minute. Not A Hair Out Of Place! The 4-H kids then tidy themselves up. These photos were taken during the auction. The pressure was off and the kids had fun, knowing they were on the downhill slide. 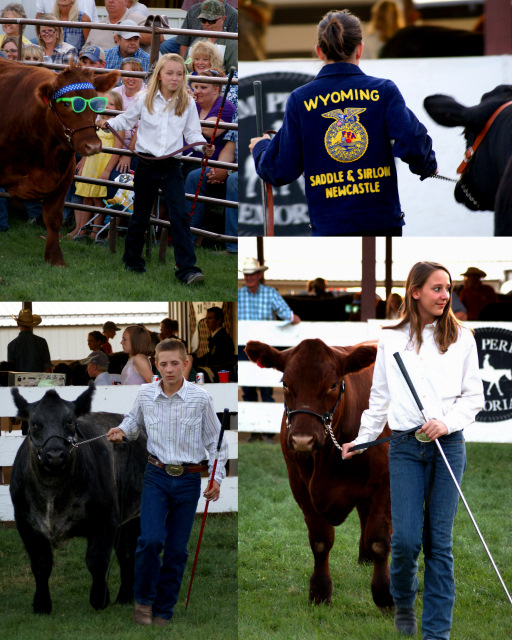 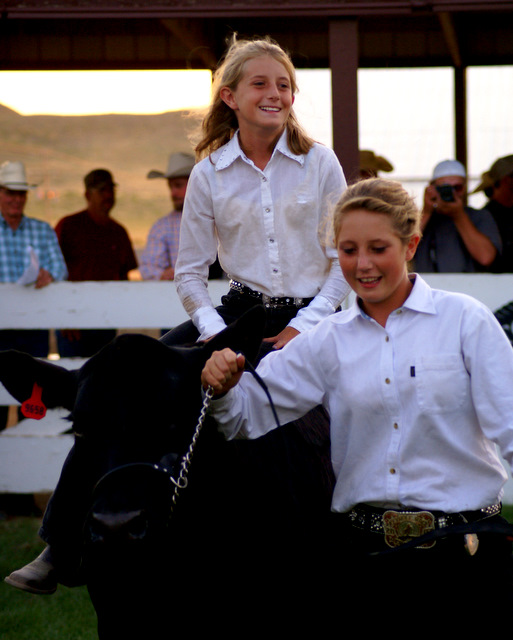 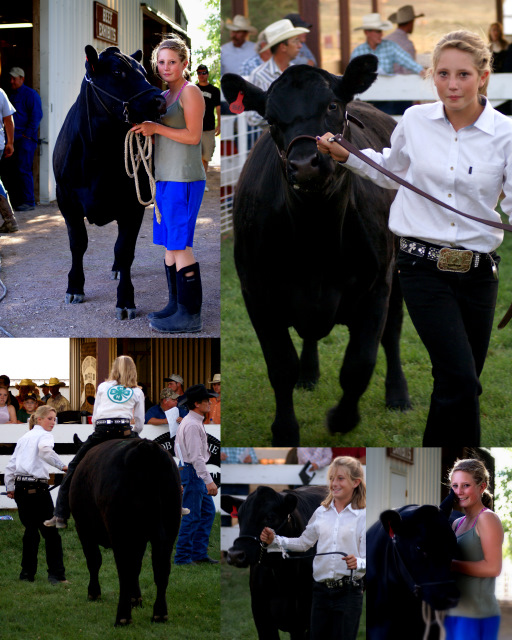 Another friend’s little girl delighted the crowd with her sense of humor when it was her turn to walk her steer at the auction. He’s sporting a headband, shades and moussed hair! 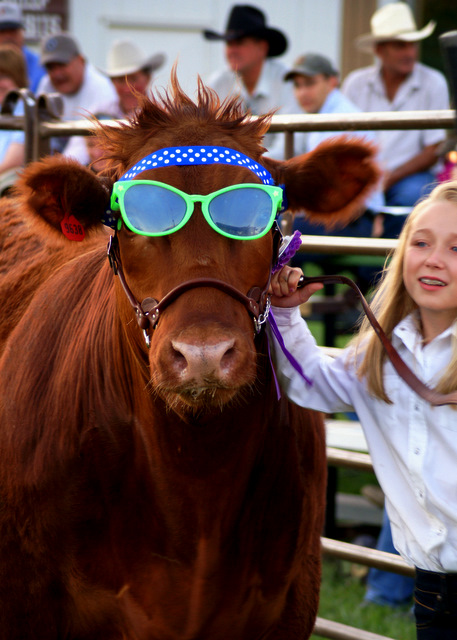 Other animals shown by children (at our fair) included poultry, pigs, sheep and rabbits. I reserved two purple ribbon Australorp hens (to purchase), but I wont pick them up until they return from State Fair. Top placers in all categories win the chance to take their projects to the next level of competition if they want to pursue it. 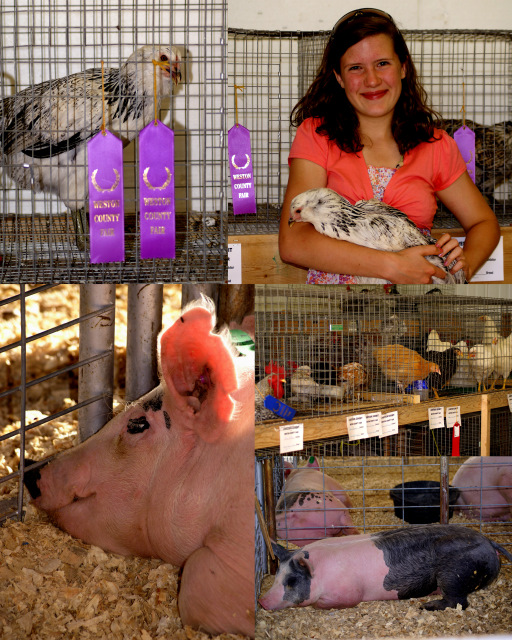 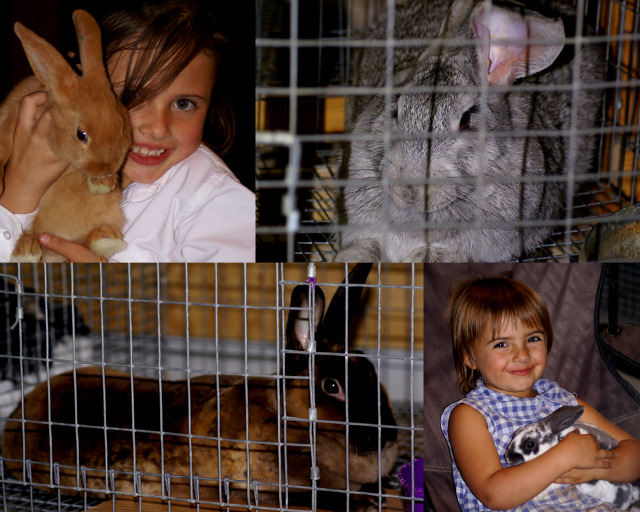 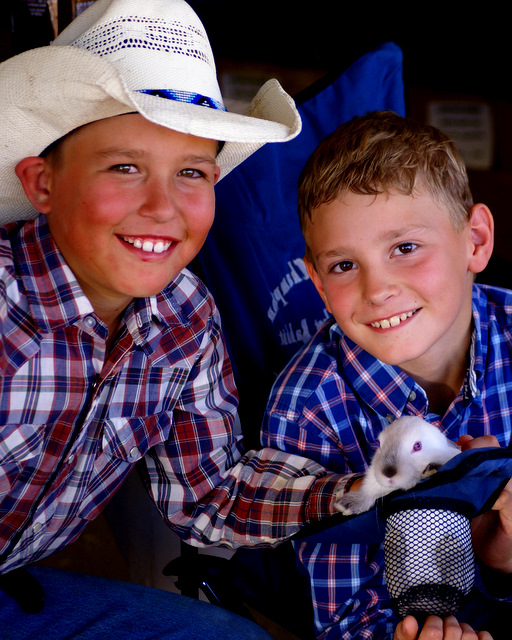 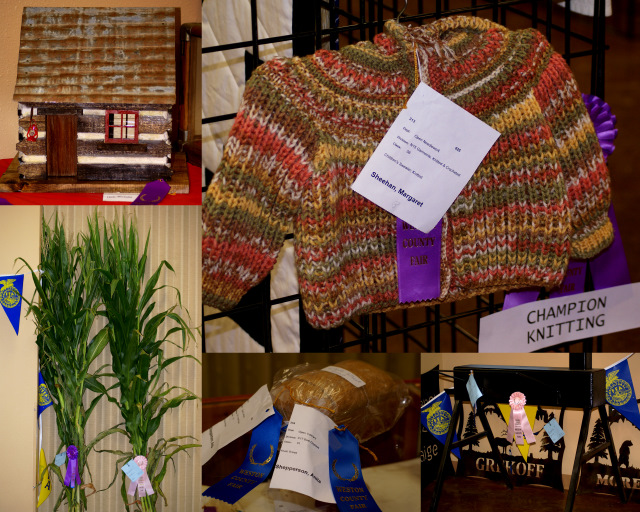 I so enjoy looking at all the exhibits. Here, let me show you … 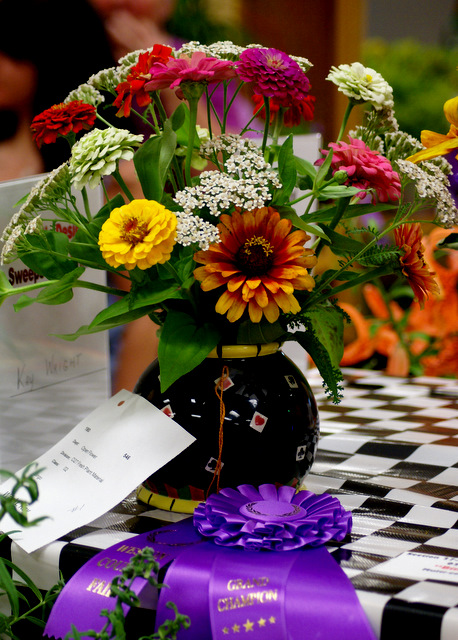 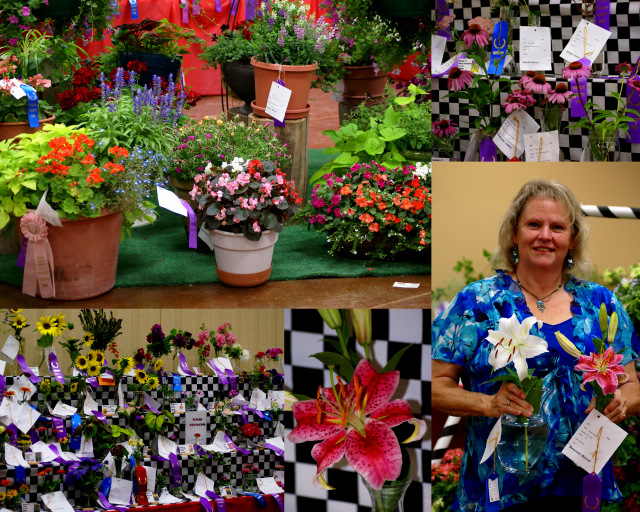 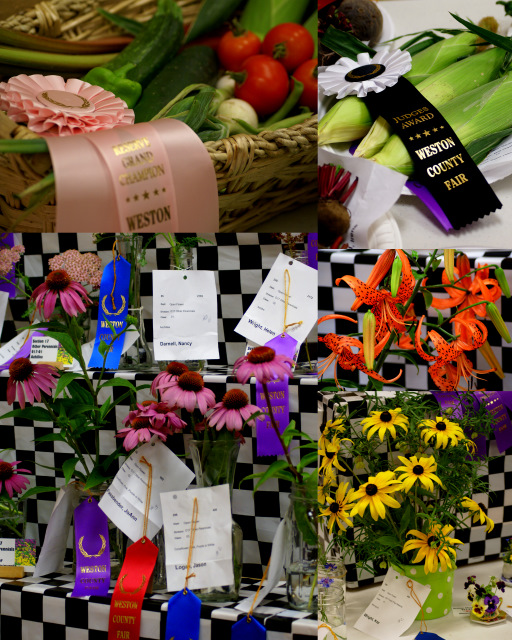 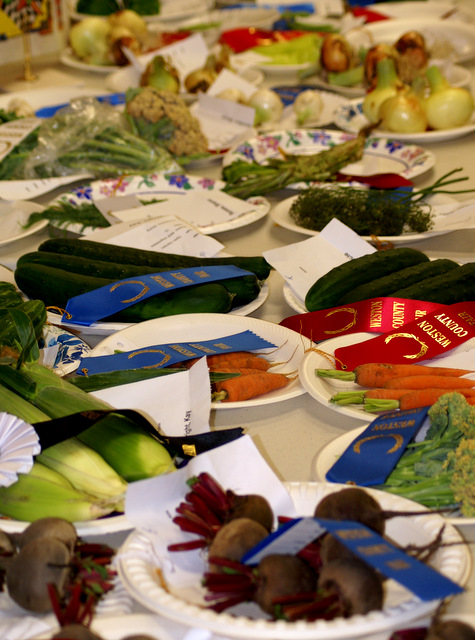 “Earth is so kind, just tickle her with a hoe and she laughs with a harvest.” – Jerrold Douglas Williams 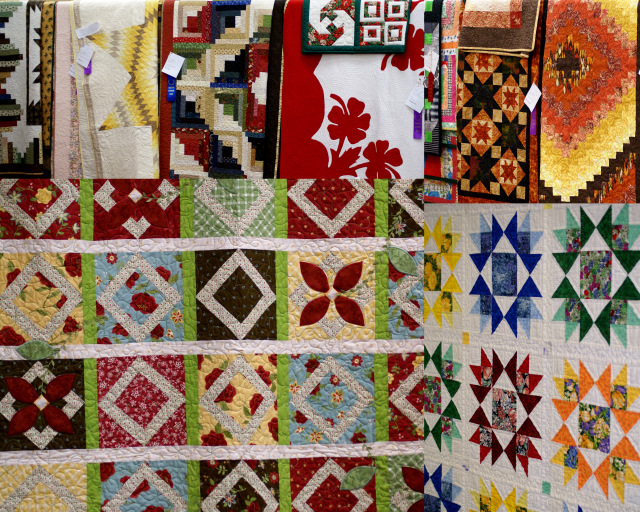 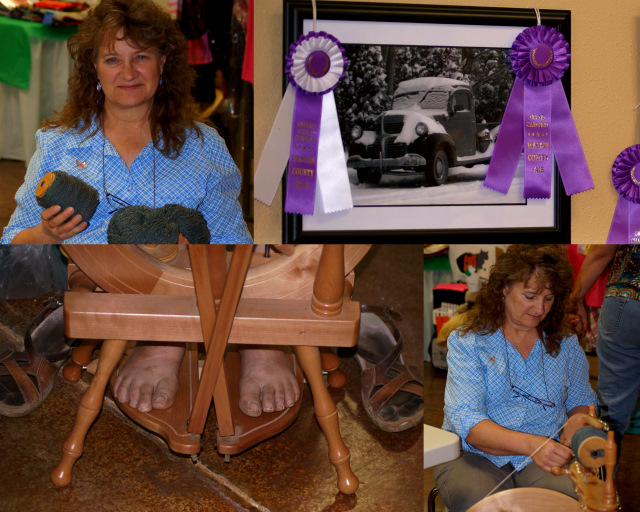 This barefooted fiber artisan was demonstrating the art of spinning wool for the public; then she showed me her award winning photos.

We generally go to the fair on Friday afternoon. I take my time looking at all the exhibits while Lynn visits with many of the ranch-folk he knows. That’s another thing about the fair, it is a major social event. In the evening, before the livestock auction, there is a big feed prepared by the Weston County Cowbelles (ranch wives organization). In the photos below, my husband is the fella in the yellow Hawaiian shirt. 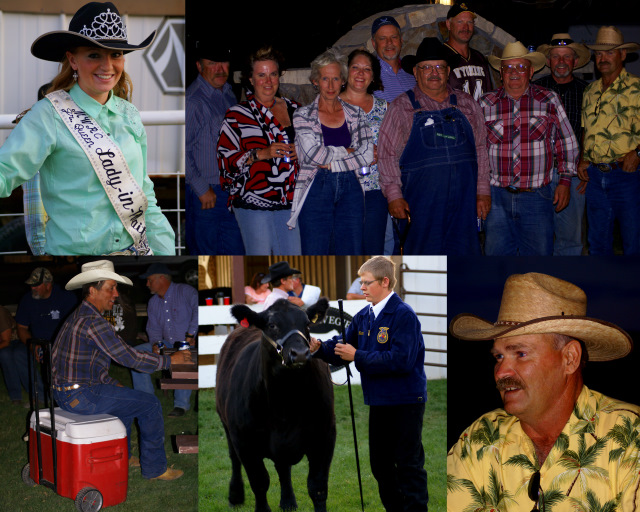 At the end of fair, everyone is tuckered out … the kids and especially their parents. I hope you enjoyed our fair and maybe the fair in your neck of the woods too. 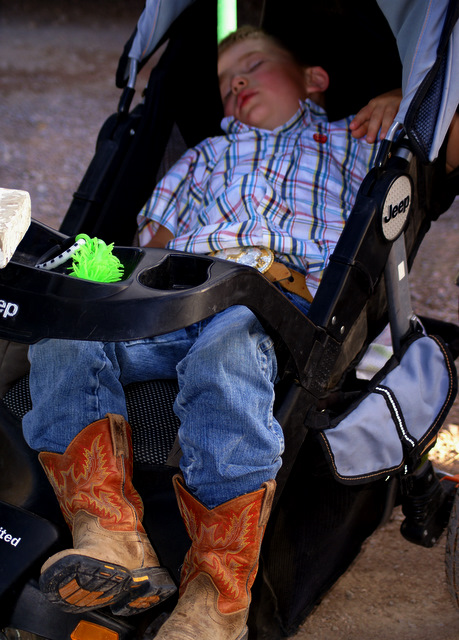 Just a handful of other items to share with you before I sign off. My husband took on some more hay fields. Although it is late in the season, we’re putting up more hay. Our new “old” swather will pay for itself this season. All Lynn has done for the past 2 weeks is chase wind-rows of hay with the baler, load the bales and haul them home. Here are some photos of the other day when I was driving the swather. This is “dry land” hay, so the wind-rows might look kinda puny to farmers that have lush, irrigated hay fields. However, the nutrient quality is excellent. 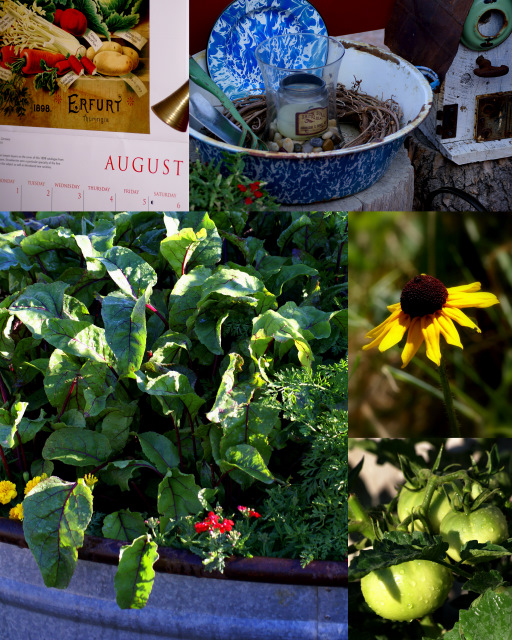 My garden has been a bit of challenge this summer. It was a wet, cold June. Great for grass (hay & pasture), but gardens got off to a very late start in a place with an already short growing season. Then, hail. Then, bugs. So, although my beets & carrots are good, the tomatoes are few. Oh well, that will put me at the farmer’s market in nearby Spearfish, SD next week. I want to can some salsa and cucumber pickles.

My hens are allowed to free-range for a couple hours before dusk. I give them lettuce from the garden now that green forage is drying up. My Canada Red Chokecherry tree grew half-again in height from last year when I planted it. 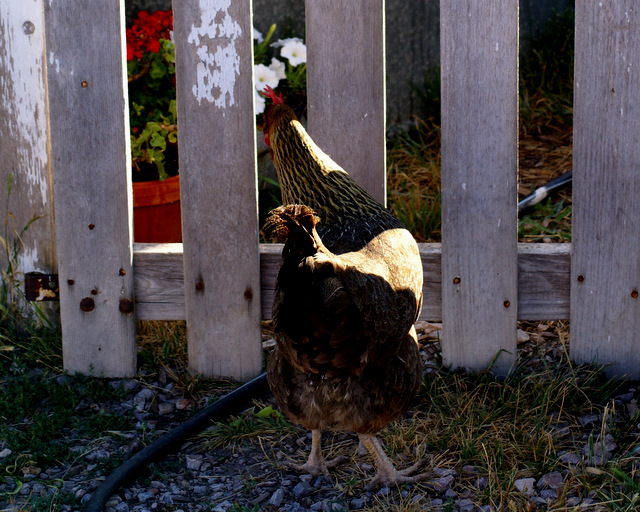 “Yes, I bet you would like to go in the garden. Sorry, no chickens allowed!!” 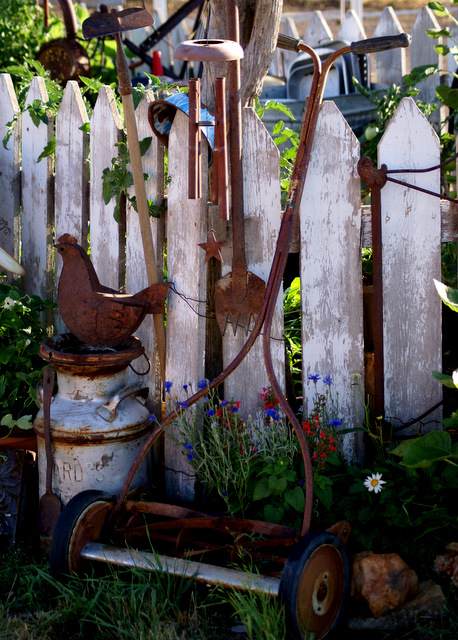 I made some beet pickles and I’m going to make my mama’s beet relish too. I was tickled to see that the violet Yarrow I divided came back in three places. The log boy garden stake that Michele made for me has done a good job of supporting my newly planted Aspen.

1. Can you identify this plant that looks (to me) like a baby tree??? Whudizit?? It was in a pot with some Coreopsis I bought. I haven’t pulled it yet because I thought maybe it is something worth keeping. (Photo below) Yes or no??

2. What can you tell me about Ground Cherries? I bought one at the Nursery and planted it in the same stock tank as some tomatoes and peppers. It seems to be happy there. What kind of space is ideal? How many is enough? How do you know when the fruit is ripe?? For those unfamiliar with them: The plant is low & bushy; the fruit appears early and ripens inside a papery husk. Then what? Do you eat them fresh or make a pie or jam? I bought this plant on a whim. Thanks for any info you have to offer! 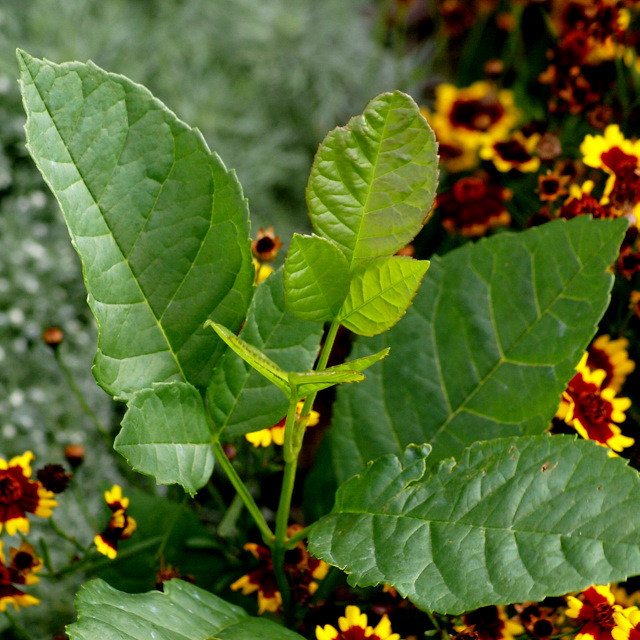 Lastly, I have to share this recent photo of my sister enjoying the evening and a quiet moment with her first grandbaby, Oliver. My “little” sister is now a grandma. I love this image and the thought that came to me fits seamlessly with the theme of this article. It was a pleasant revelation. I think we’re both in the August of our lives – harvest time. If you look at it that way, getting older is easier to accept … and even embrace. God willing, there is a lot of calendar left to live.

“Then a score of voices chime, coming from what insects I cannot tell, but full of all that blessed gladness which God so kindly put into the heart of every living thing. I listen and praise.”

A new understanding of enjoying the harvest came to me. Not only is harvest time here, I’m there. 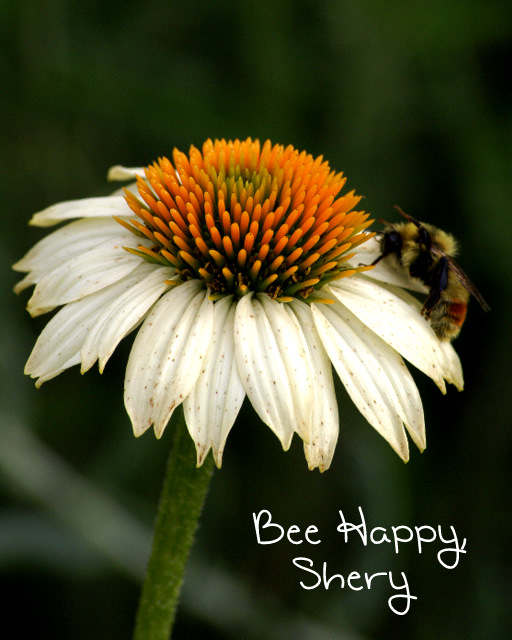