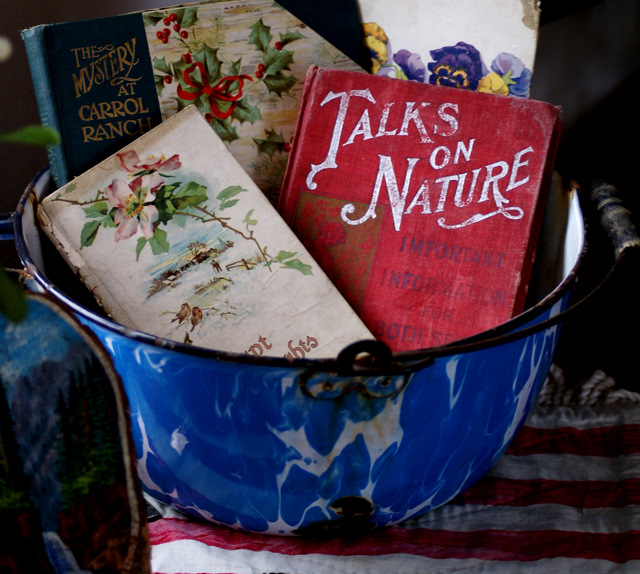 When you’ve got a jumbled mix of things and you toss them in the same pot, you’ve got a “hochepot” – the french word for hodge-podge. A little of everything went into this article, resulting in a heaping helping of hochepot “pie”. Also included is the edible recipe!

To begin … My farmgirl sisters and I were chatty (imagine that) and Michele brought up the subject of earning sisterhood badges. I’m ashamed to admit that I hadn’t considered “going there”. But, as we talked, we decided that it would be fun to work on badge goals together. Gosh, I looked up the badge categories and are there a LOT of subjects to choose from! Anita just taught Michele and I how to make egg baskets a week or so ago. Then, yesterday, we went on an ‘off the grid’ trail-ride and I think that could count for wildflower identification badges as well as something in the “Outpost” category. I have a jean jacket ready for badges, now all I gotta do is go for it. If you would like to expand your farmgirl know-how and earn badges too, go to: http://www.farmgirlsisterhood.org/ and take a look around.

Above: Anita took her turn at hosting our recent farmgirl get-together. Several other farmgirls could not make it, so the group consisted of Michele and I. Our craft project was basket weaving. We began with two circles of oak to make the basket frame and handle. Next was weaving a “God’s eye” where the circles meet. We then cut and inserted the round reed pieces. Anita had soaked the reed and had a work-table set up for us in the patio pergola. She makes and sells her beautiful baskets and they’re made to work! 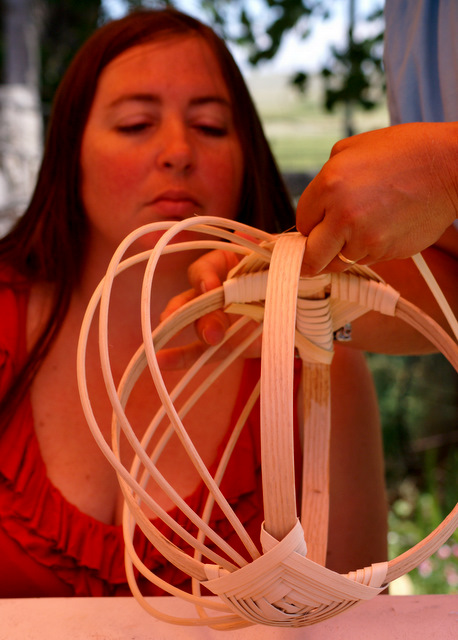 The baskets went fairly fast and it was fun to see them take shape. My basket was short and squatty and Michele’s was more true to the egg basket style. The sense of accomplishment that you feel when you learn a new skill is something that never grows old. I have a whole new appreciation for the time that goes into this ancient art. The finished baskets are shown below, drying after being dipped in liquid stain made from crushed black walnut shells. Anita made the egg basket above; she used some variegated dyed reed in her’s. 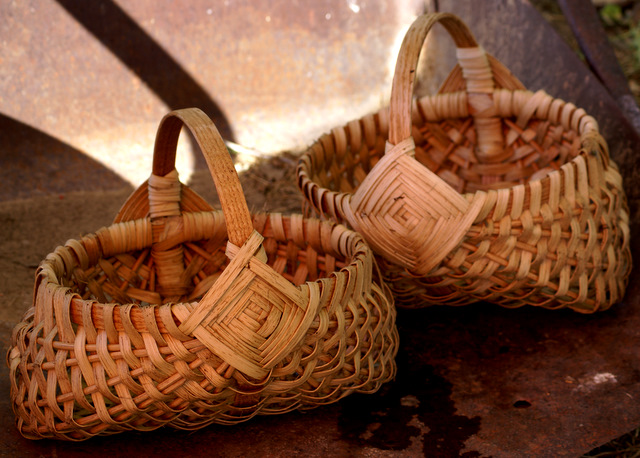 Whilst making our baskets, a Tom Turkey serenaded us the whole time and he was just inches away. I guess toms live to show off and he fluffed his feathers and gobbled non-stop. His ladylove is raising their brood in seclusion, so maybe he was a little lonesome. Anita’s husband named him after a mutual friend who is uhmmmmm, well … a chain-talker. :o)

After we finished our baskets, Anita took Michele for a “drive” to the iron “boneyard” on the ranch. There are lots of vintage goodies in old ranch dumps that make fine embellishments on her birdouses. 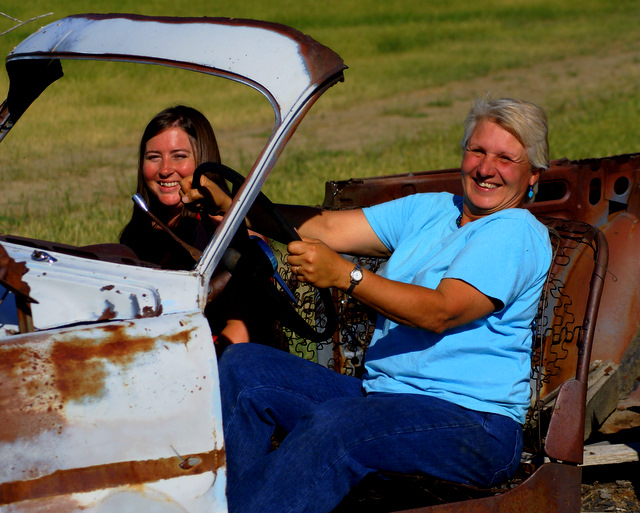 Our MaryJanesFarm sisterhood chapter members have been busy doing things together. A couple weeks ago, we had an arts & crafts show/sale on the same weekend as our little town’s annual festival. There are all kinds of activities over the weekend, beginning with an American tradition: a parade. My absolute favorite (and they turned out to be the winners of the children’s category) was a group of young sisters that led their 4-H sheep, steer and milk cow. Now, that takes some work to insure that livestock will remain calm in such a noisy setting. These are farmgirls 4-Sure and I found it very encouraging to see them proudly representing their local 4-H club. 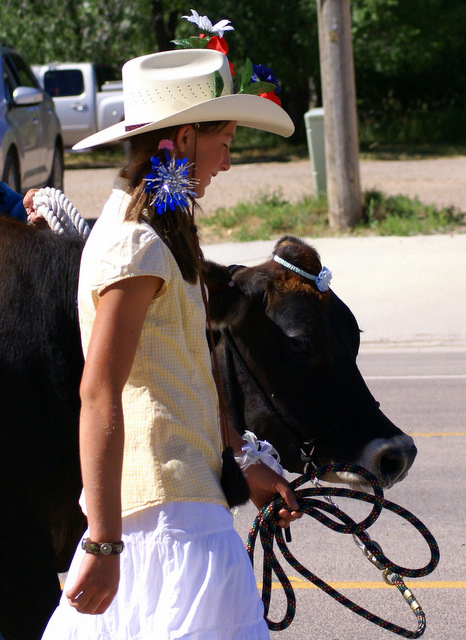 Below are a few parade and festival highlights: 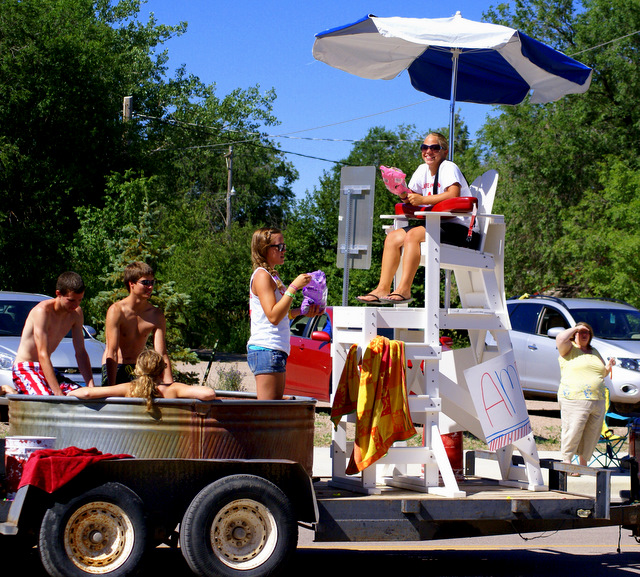 Above: My dad pulling a flat-bed trailer loaded with his graduating class of 1953 (in his restored 1953 Ford pickup). My mom is in the passenger seat; they’ve been sweethearts since highscool.

Above: Anita and her husband, Jerry, rode their Morgan Horses in the parade too. They’re both involved with the county search & rescue group.

Now, back to our farmgirl show/sale that also took place during “Upton Fun Days”. Each of the farmgirls (and my sister, Beth) made and brought a variety of things. We also had some vintage or second-hand odds & ends for sale too. We’ve decided to have 2 more shows this year – one in the autumn and another before Christmas. My dad let us use a vacant showroom in the front of their old hardware store building. Works perfect and it is right on mainstreet. Here are photos … 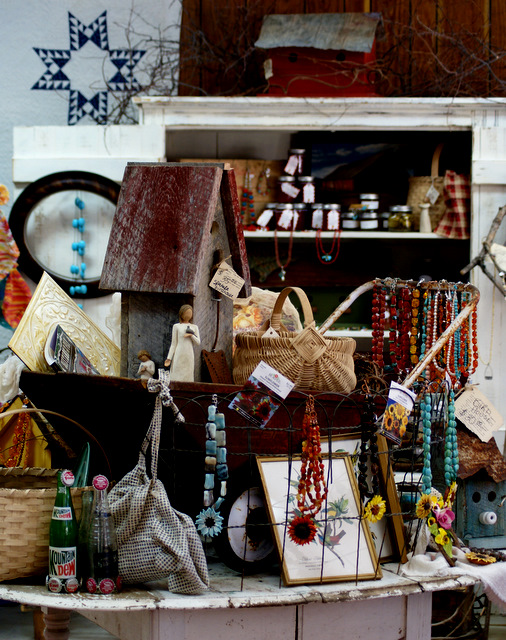 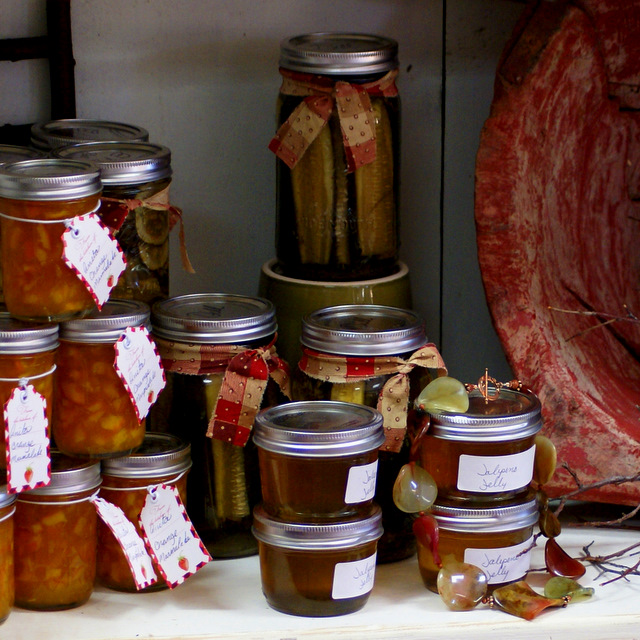 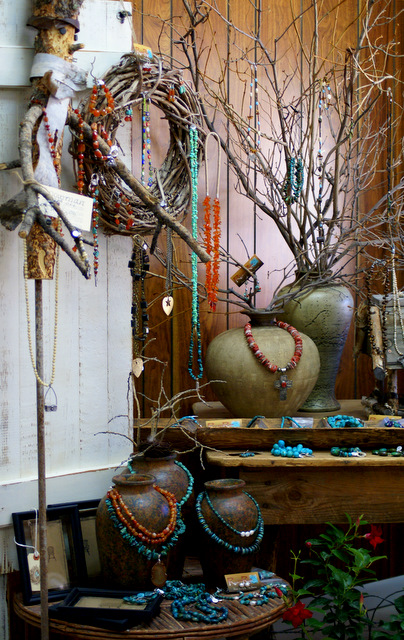 Next item to go into the hochepot is our farmgirl trail-ride on the 26th. Michele enjoyed riding horses when she was a kid, so she joined Anita and I and she borrowed ‘my’ Bluebelle as her trusty steed. Dolly gets more press coverage, but Bluebelle is every bit as wonderful; she’s technically my folk’s horse. We headed off into the National Forest area called Moskee (about 40 miles away). We had no map, just confidence … which would be tested during the ride :o) I had gone on an organized group trail-ride in that area about 5 years ago. Beautiful change of scenery for us prairie dwellers. Moskee is at the far western edge of the Black Hills. We headed down what I imagine was once a two-track forest service trail. I was thinking that we would make a large circle. Wellllll, somewhere we took a wrong turn and got to see a lot more trail than we’d planned on. Michele got stung by a wasp twice. There were a few kinks on our ride, but, in the end, we found our way back and after we ate & cooled off, we headed for home. When I unsaddled Dolly & Bluebelle, I gave them a hose shower to rinse all that itchy dried sweat off. Here are some photos of the sights on the ride …

We were riding along a hillside that had once burned and when we looked down into the gully, there were lots of wild raspberries just right for the picking. I watched over the horses while Anita and Michele picked. They offered me several handfuls too.

It did get a little steamy, but there was shade along the trail and every now & again a breeze would cool us off. I opted to wet down my T-shirt when we watered the horses. 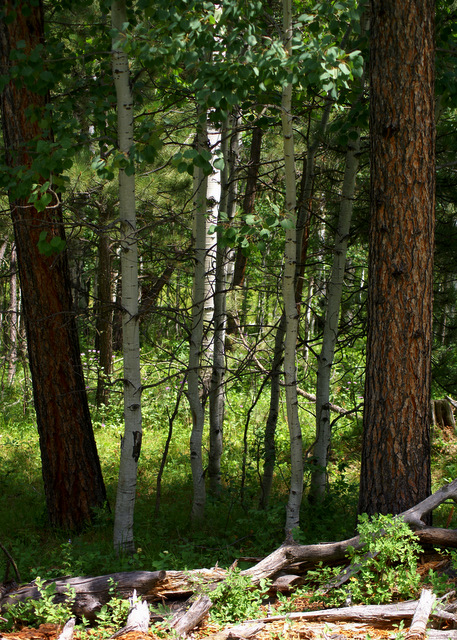 Fire is common here in the summer time. We saw a large plume of smoke over Bear Lodge on the way home. This ridge tells the tale. Also, apparently a strong wind or possibly a tornado went through this area in the not so distant past. We saw many trees whose tops had been broken off or the trees had been twisted and broke off midway down the tree. Huge pines were broken like they were matchsticks. 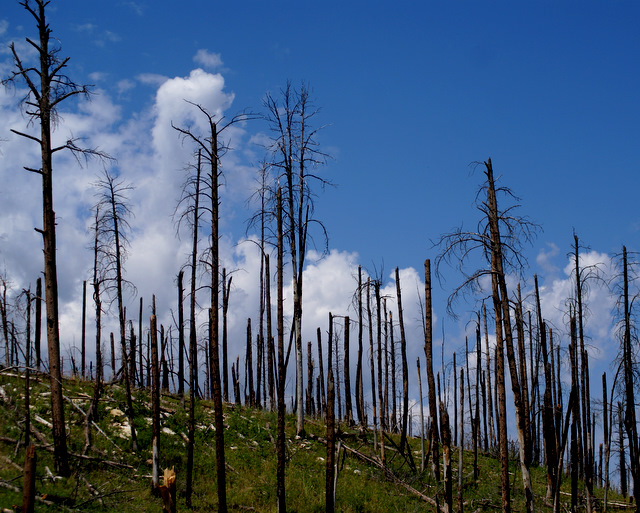 One of the most enjoyable details on the ride was the wildflowers. They were out in force. There is something in bloom nearly all summer. The girls and I thought one of our farmgirl badges should be wildflower identification. So, we were really on the hunt. The exotic find of the day was this rare beauty, Woodland Pinedrops, a saprophyte that lacks green chlorophyll. 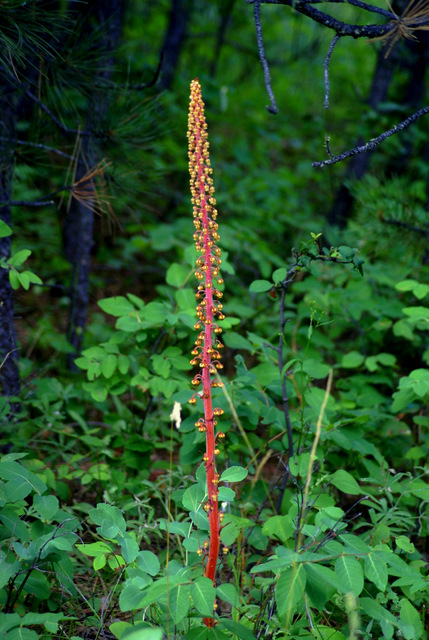 There were also a few of the dried plants from last year still standing. They are a vivid rusty brown.

More wildflowers along the trail … 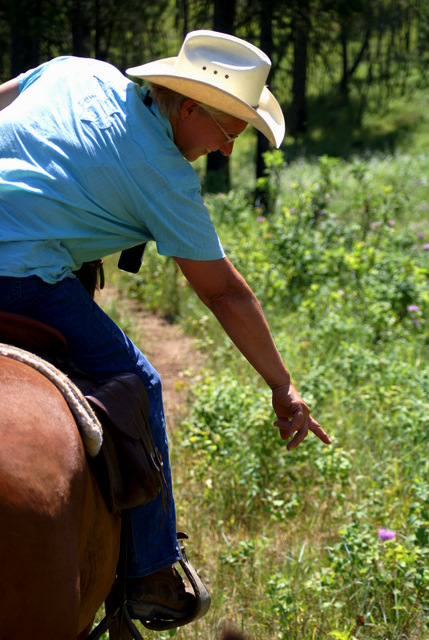 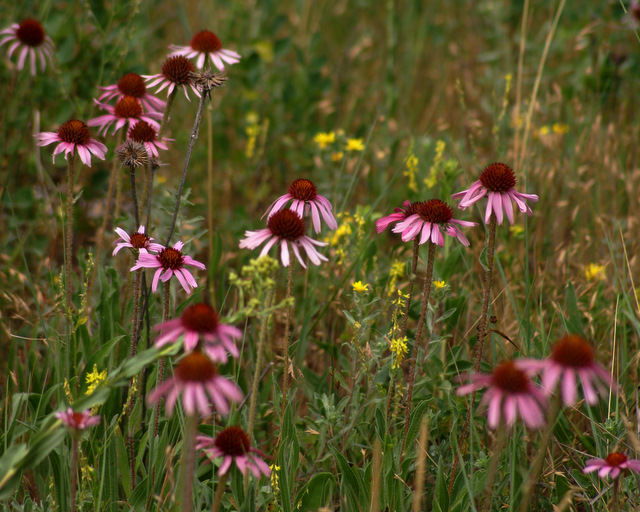 Here at home … I relate to the cottontail in this photo. On that hot afternoon, she’d found some shade and was cooling off. When I rode near her, she didn’t move. The horses are slick & fat and they also head for shade in the heat of the day. My husband has most of the hay bales hauled home. My Rat Terriers enjoy a dip in the creek or a low water tank that I filled for them. I discovered another bird nest to add to my collection. I’ll go fetch it soon. When I found it, baby robins were still popping their wee heads out of it. One of the new perennial additions to my flower bed is this red & yellow Coreopsis — love it! Lastly, I really need to lose about 20 pounds. Part of my gameplan to get there is to eat 5 small meals a day. Not eating often enough stalls out metabolism. I just have to DO it! Wish me luck.

Ok, now I’ll share with you the last item of business, my recipe for Hochepot Pie. It is kinda like old-fashioned shepherd’s pie and easy to prepare. Leftover meat & gravy make it even easier.

5 C cooked meat mixed with raw vegetables; I like carrots, peas, green beans, corn, diced onion and shredded cabbage. Many other veggies would work too!

Half stick of butter

Grease a 9 x 13″ pan or a stoneware baking dish of a similar size. Pour the meat & veggies in, then gravy, then potatoes; top with tabs of the butter, then cheese. Bake at 350 for about 45-50 minutes or until the cheese begins to turn golden brown.

I hope ya’all are having a good summer. Thank you again for taking the time to leave comments for others to enjoy and for your kind words to me. You feed my spirit. I wish we could all go on a ride together, wouldn’t that be sublime fun?! Not possible, I know, so I’ll just wish for you Happy Trails in your little corner of the world. Please believe me when I tell you that I was thinking of you when we rode the other day. Picture yourself in the saddle in the photo below. I had you in mind when I took it. 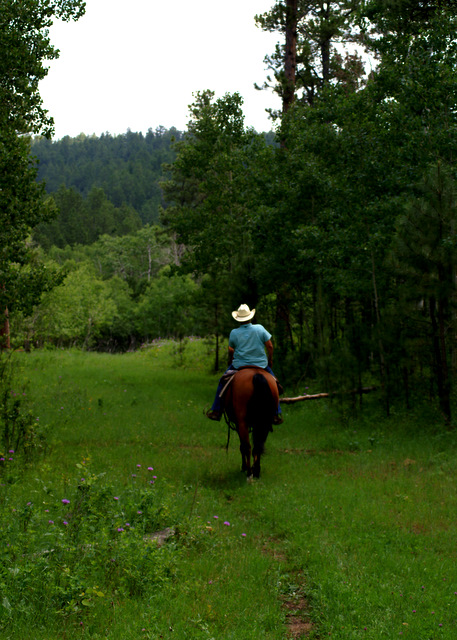