A Berry Misadventure and Other News

Sometimes, a carefree morning of harvesting wild berries transforms into a challenge that must be defeated!  This happened to me this week with several kids (and one soon-to-be-kid…)in tow.  Without those determined kiddos, this Farmgirl would have turned around long before the rewarding finale. 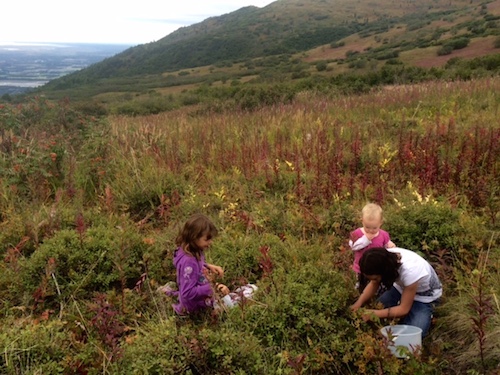 Farmgirls in the making.

I have only seen the kids I nannied for a couple of times since the school year ended.  I won’t be sitting for them this school year, so we’ve been trying to get together.  Berry picking seemed like such a great way to spend some time outside with a few of the lovely little people in my life!

Harvesting wild anything is a favorite activity among Alaskans.  This time of year is especially popular for berry pickers–we have blueberries, the end of raspberries/salmon berries, currants, high bush cranberries, crowberries, rose hips and watermelon berries.  For me and most others, blueberries are the most highly prized.  They primarily grow on southern facing slopes of mountains above tree line.  They are small compared to store bought and commercially grown varieties, but wow are they tasty!!  I’ve gone berry picking every year since moving up here with varying success. 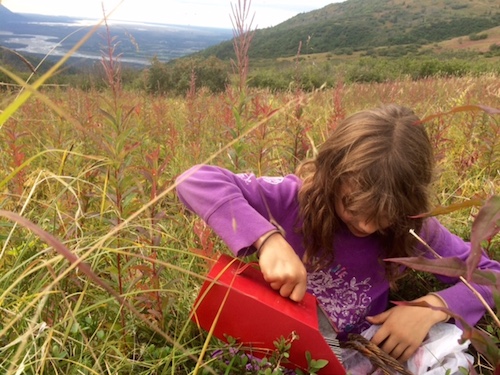 Jess tests out the berry picker, but ultimately chooses to hand pick.

This year, I’ve gone out three times and collected a total of about one gallon of berries.  This is measly compared to the gallons upon gallons that many folks harvest and put up, but it’s a good start.  We’ve mainly gone to locations that are pretty popular (read: previously picked), and Ava ends up eating about half of what is harvested!  Plus we only go out for about an hour at a time. What a good excuse to go hang out on the side of a mountain (as if we need an excuse for that!).

Well, I’ve heard from several good friends that the berries are prolific up in the “Matanuska Bowl.”  They claimed the berries were prolific and fat and the pickers were few and far between.  Blinded by the visions of a blueberry smorgasbord I neglected to remind myself that these friends are legit mountaineers.  Future reference: A “short hike” for mountaineers is anything but!

So, I invited my kid friends to join me in some berry picking in the Matanuska Bowl.

Cody (4), Jess (8), Samantha (10) and their sitter met Ava and I for some treats at a local coffee shop before heading out to the trailhead.  Everyone was full of sugar and all smiles with empty buckets and full bottles of water. I wore Ava in a big metal framed baby carrying backpack. We started to hike, and the trail soon became steeper and steeper.  The hill seemed never ending.  Luckily, there were high bush cranberries along the edges to keep the kids distracted.  Cody kept asking “How much farther?” “Where are the berries?”  When I don’t know the answer to these questions (or when I’m sick of them), I pull out what my dad used to tell us: “Just over the next hill!”  Boy, was I wrong!

Cody and the sitter turned around before we got to the top of the first hill.  We praised Cody’s excellent hill climbing and the girls and I marched onward and upward!  We soon came to a small side trail that looked like it ended in a clearing.  We decided to take the side trail.  Unfortunately, we ended up in a clearing of nothing very edible, but the views were great.  From the view, I could see that tree line was still quite a bit higher than we were… At this point, I decided to call one of my aforementioned mountaineering friends to find out how much farther we had to go.  The news wasn’t great: she said “at least half an hour” but I knew we were in for longer!

If it hadn’t been for the determination of these young Farmgirls-in-the-making, I totally would have turned around!  I was stinky, sweaty and tired.  My morning hillside stroll was on its way to becoming a day on a mountain.  Luckily, we kept on keeping on. 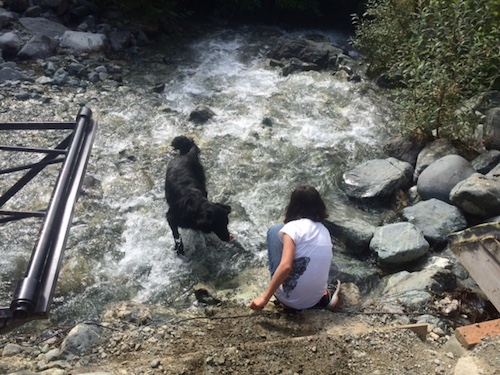 A short break for some splashing. Sam filled her bucket with water for the dogs (and for splashing Jess and I!). What a thoughtful girl.

The great thing (it can also be a not-so-great-thing, depending on how you look at it) about hiking with kids is that they stop often.  The girls stopped to: splash in the creek that runs alongside the trail, collect walking sticks, gorge on watermelon berries, collect “pixie” dust from the crumbling hillside, and to show off some of their mad climbing skills.  I, for one, appreciated the slow pace! 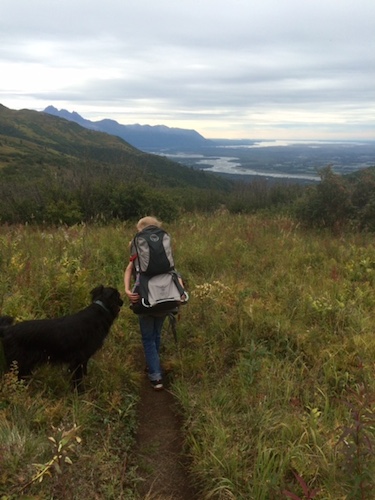 Sam wanted to help me out for a little bit. Jess insisted on carrying Ava in arms for a bit too. What great little helpers.  Check out that view-iew-iew-iew…

We hiked and hiked and hiked, up and up and up. At one point, more than an hour in, we passed a group of three adults and one little one in a big backpack coming down the trail.  They told us that we were half way (what?!?!) to the berries, but that it was worth it! They had gathered five gallons of berries.  At first I was inspired, but the mom of the grouped looked at us skeptically…and a bit worried.  Should I be worried? I thought.  I mostly just regretted my choice to wear jeans… 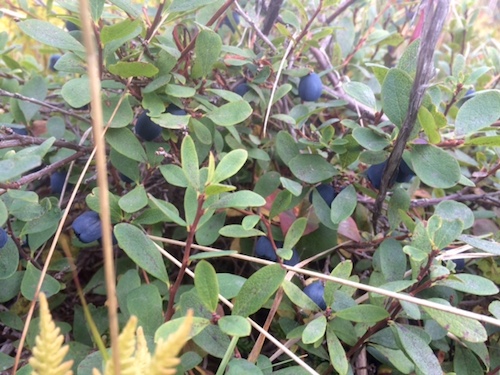 We hiked and hiked and hiked, up and up and up.  After about two hours, Sam declared that we should turn around, but Jess insisted that we go on.  Why turn around now?!  I could see up the mountainside at this point, and could see where tree line ended…it was still about a hundred vertical feet.  This seemed like a lot at the time.  We ended up giving ourselves a time limit–if we didn’t get to blueberries in nine minutes (a compromise from my original suggestion of fourteen minutes), we would turn around.  Well guess what?! EXACTLY nine minutes later, we saw our first blueberry bush…but it didn’t have any blueberries. 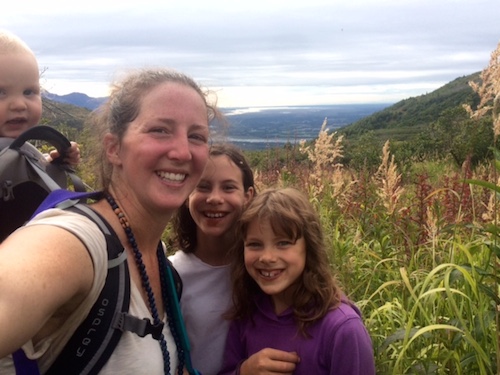 A few hundred yards later we made it! blueberry bushes galore!  We were the only ones up there with blueberry bush after delicious blueberry bush.  We rejoiced in our perseverance and started gathering.  The girls declared several times, “it is so beautiful, quiet and peaceful up here!” “I wish I could live up here” and “I’m so glad we kept going.”  To be honest, this was reward enough, the blueberries in my fridge are just the proverbial frosting on the cake. 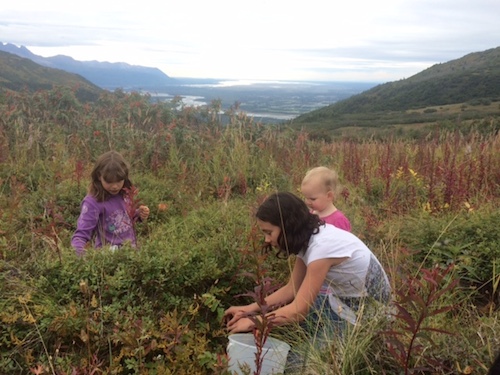 I wish you could see their berry stained faces! And again, that view!

After about an hour of harvesting we decided to head back down…and down…and down….This might have been the toughest part of the day as we were all tired and hungry.  We made it and headed home for dinner.  The girls scarfed down two helpings.  After her dinner, Sam declared, “I’m going to feed the horses, so I can go to bed!”  Getting kids to do chores and go to sleep can be a battle, as any parent or sitter can attest to–so this was a sign of a day well spent.  Sometimes, misadventures can be successful!  I’ve already been enjoying my berries in oatmeal and a smoothie.  I can’t wait to make some of my rosemary sage blueberry jam.  Yum.

Sam wants to help me out for a little bit. Jess insisted on carrying Ava in arms for a bit too. What great little helpers.

Part of my exhaustion on this hike came from the fact that I’m pregnant with our second!  We don’t know the sex, we’re keeping it secret like we did with Ava, but I’m thinking it’ll be a boy…I’m just over half way through the pregnancy with a due date of Christmas, 2015.  Hiking up a mountain while carrying two small humans was difficult…and a bit painful. My knees are not especially happy with me today. Further future reference: bring hiking poles on “short hikes” suggested by mountaineer friends.  Yay for more farm babies! 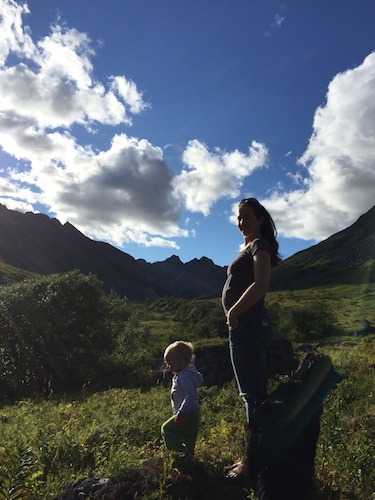 There’s another farmbaby in that there belly!

Do you have any memorable misadventures?  Share a story with us, we love to hear them.