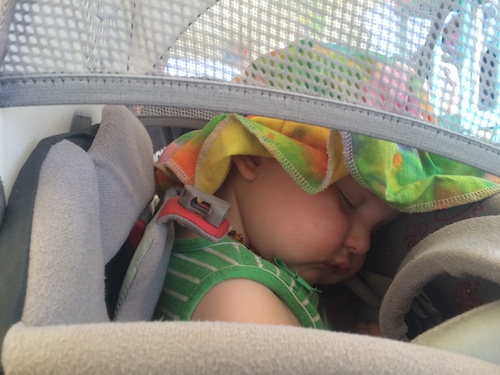 Dog days make us all sleepy enough to take some zzzz’s in the most unlikely of places, like in a backpack.

We are in the thick of the dog days of summer.  This is different in Alaska than it was growing up in the Midwest.  In Alaska, it is “hot” when it’s over seventy degrees.  For some reason it feels WAY hotter!  Maybe it’s because of the angle of the sun?

As a kid, “hot” was over eighty five degrees.  During the dog days, it was also really muggy with very high humidity.  I knew when my parents and grandparents referred to the “dog days” it meant that it was hot and muggy, but I always thought that we knew it was officially the “dog days of summer” when the duck weed appeared on the lake at my grandpa’s house.  For some reason it made sense to me that dogs would get covered in duck weed when swimming and they would want to swim because it was so hot…so we called the hot days the dog days–makes sense, right?… It’s funny what associations we make as kids! 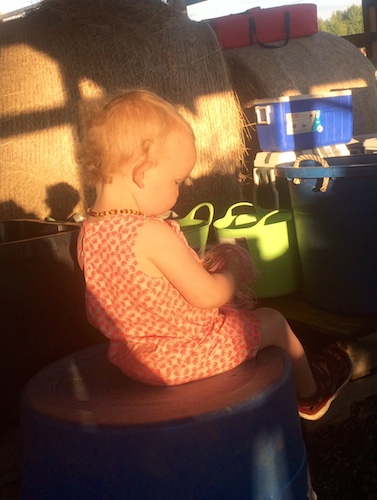 Enjoying the evening sun with a pony while the other Farmgirls and I wash and bunch produce.

Up until today, I still thought the dog days just referred to the hottest days of summer, which happen to be in late summer.  Maybe it had something to do with panting dogs or something?  However, after a bit of research, I’ve had a little astronomy lesson!  Did you know that the “dog days” have been called such since the ancient Greeks and Romans sweltered in the late summer sun?  Like many other cultures, the ancient Europeans used the stars for many things; and, in doing so, assigned shapes to the stars to help remember them–what we now know as constellations.  While the cultures around the world didn’t have the same constellations, we are now familiar with those that the Europeans assigned to the stars. 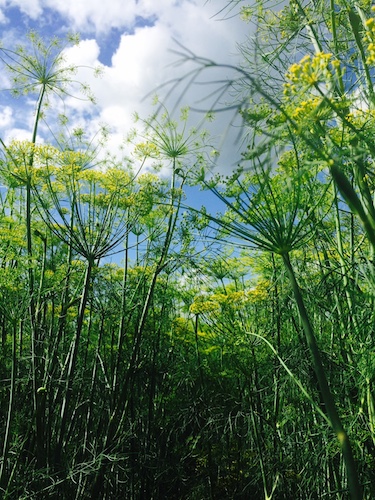 The dill is loving these dog days. it’s nearly five feet tall!
is it enjoying the extra light that Sirius provides?

The constellations rotate positions during the seasons, with certain ones visible during different times of the day and year.  I’m not much of an astronomer, but I do know some great ones (I’m looking at you–father-in-law Dennis! He was the first person to point out the winter triangle to me).  The winter triangle is made up of three of the brightest stars in our night sky: Betelgeuse, Sirius and Procyon.  These stars are easily identifiable during the winter by locating Orion (I always see his belt, first) and moving on from there.  Did you know that Orion has a dog?  The dog’s name is Sirius after the brightest star in the dog’s constellation: Canis Major.  Sirius also happens to be the brightest star in the night sky.  This is because it is so close to Earth–only 8.6 light years away!

While Sirius is very visible during the winter, during late July through late August it seems to rise and set with the sun.  The ancient Mediterranean people thought that the added heat that this very bright star added to the sunlight is what aided in the hot, muggy days during that time.  Hence, the term “dog days” was born.  So it has nothing to do with earthly dogs…just one space dog star.

So, there’s some trivia for you! 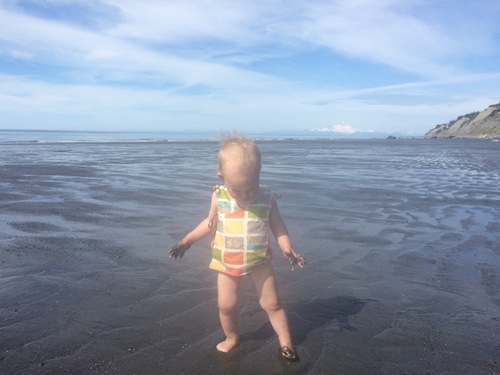 A side trip to the beach while camping was great fun. See the volcano in the background?

Anyhow, the dog days can often leave people feeling fairly drained, and they frequently coincide with very busy times.  We want to laze in a hammock, read a book and drink lemonade when it’s hot and gross out; but I’ve discovered that many people are very overbooked and overworked during this time of year.  There are many end of summer festivals, state fairs take place, people take advantage of their last chances for summer vacations, and lots of visitors are welcomed by hosts far and wide.  On the farm, the height of harvest time approaches as the threat of burnout simultaneously looms ahead.  In Alaska, at least, school starts next week! Whoa! 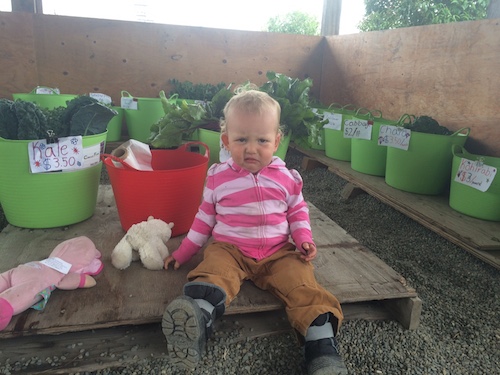 Ava, my willing and…happy?…helper at the Sunday farm stand. She was all smiles until I asked her to smile for a photo. She’s also a tomato thief! Little stinker!

What have we been up to?  So much!  We attended a music festival last weekend with four nights of camping with Ava and our dog, Moki.  Because we took time off of work for that, we worked a little extra on both sides of the trip (I, for one, have definitely been feeling the physcial exhaustion of extra work).  Evan will be gone “on business” for ten days of the next two weeks, and then we are headed to Colorado for a wedding and another family vacation; and then Evan is gone again! We have been finishing up our canoe repairs (we will go canoeing this summer, darnit!), and I’ve been using up food in our freezer in preparation for putting up produce from this summer. This mostly translates to making various stocks and broths (veggie, chicken, bone) and eating a lot of frozen berry smoothies. We’ve been berry picking, apartment hunting, and getting in as many outdoor meals as possible while the weather permits. 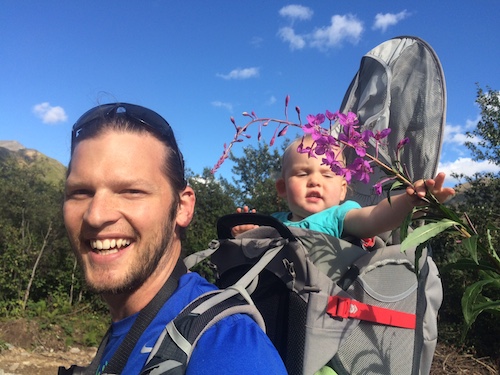 On our way to pick some blueberries. We weren’t incredibly successful, but we got to go on a beautiful hike on a beautiful day. Plus, we played with fireweed!

Maybe they are called the dog days because we all end up “dog tired”?! At least the more reasonable sunset and sunrise times allow for some easier, more restful sleep.

How are the dog days of summer treating you and yours?  Do you have any funny stories about why you thought the hottest days of summer were referred to as dog days? 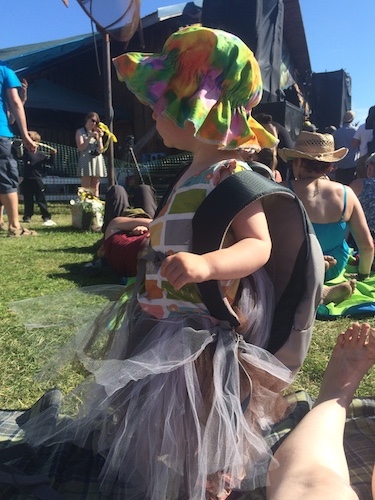 Music Festival Ava. She insisted on wearing the backpack and tutu! Ava has a new saying: “be you!” A true Farmgirl!

Until next time, Sending you peace and love from Alaska,

p.s. MaryJane and her daughter, Meg, just released a new children’s book: Moo-n Over Mainstreet Metropolis.  It is a delightful story about a milking cow finding her perfect forever family to provide with milk and cow kisses.  Ava has been reaching for it ever since it arrived.  Check out Dori, the Ranch Farmgirl’s, review and enter to win a copy of the book!