For those of you who are rudely reminded of traumatic childhood gym classes by the title of this post, I apologize.  I’ve been having a good time the last week and half reading up on this previously forgotten song.  And it comes the same week that I: 1) officially donated my remaining chickens to Louise’s Farm School and 2) consumed a fair amount of chicken broth while battling a stomach virus.  So I got rid of some chicken fat while being nourished by some other chicken fat.  I am a bit sad about the officialness of no longer being a chicken owner…those were some good chickens.  I will have to visit them.  But at least I have broth stocked up in the freezer and reliable local egg suppliers.

I have always been interested in my parents’ lifestyles while growing up in the fifties and sixties.  My mom lived in rural north central Minnesota on a lake about six miles out of the nearest small town.  She would tell me about her horses and all of the chickens they would get every year for laying and meat.  She shared the music she listened to, games she and sisters played, foods they would eat and what school was like. I love these stories of days gone by, days that I could never really know. 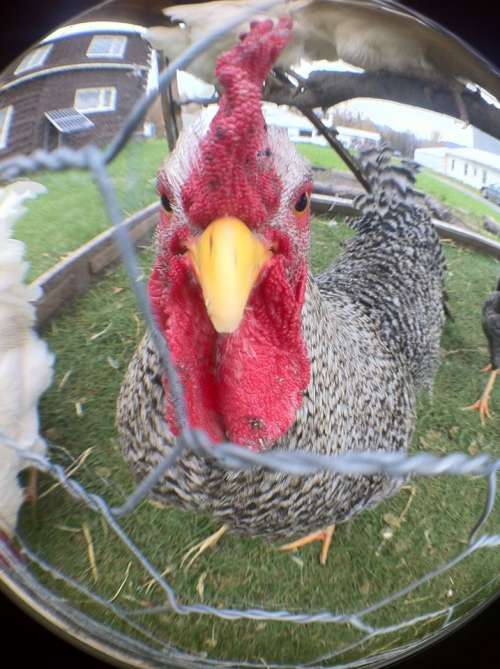 Portrait of a Rooster

The other day, Evan played a new Apple commercial for me.  Perhaps it’s on television; but I don’t know, we watched it online.  It is all about cool, convenient, and motivating workout applications that their newest phone can offer customers.  It’s pretty standard, but the theme song for it is a ditty called “Chicken Fat (The Fitness Song).”  After watching this commercial, I immediately shared it with my mother.  I remember stories of her high school gym classes with Miss Howe and how torturous the whole thing was.  They would listen to a record of this song at the beginning of every class.  Each girl in her own clean, white, initial embroidered romper, flapping around defeatedly to this song while the Trunchbull-like Miss Howe barked orders and gave all of the girls terrible grades in gym class.  This song, as well as the encouraging, “Nipple height, girls, nipple height!” in regards to pull up form are the prevailing memories my mother has of high school gym class.

This commercial brought us into fits of laughter–my mother comparing the super toned, attractive, well-outfitted athletes in the commercial with the skinny, gangly teenaged girls in baggy rompers flailing about in her 1960s gym class.  My mom’s first reaction was this: “Wow! I watched this commerical- what a riot! I’ll tell you what, It took me back. I got all those old pissed off feelings I had in “gym” class when Miss Howe would play that stupid record on her junky turn table.”  Little did we know that this song was actually part of a huge national campaign, and a lot of people have less-than-chipper memories associated with it. 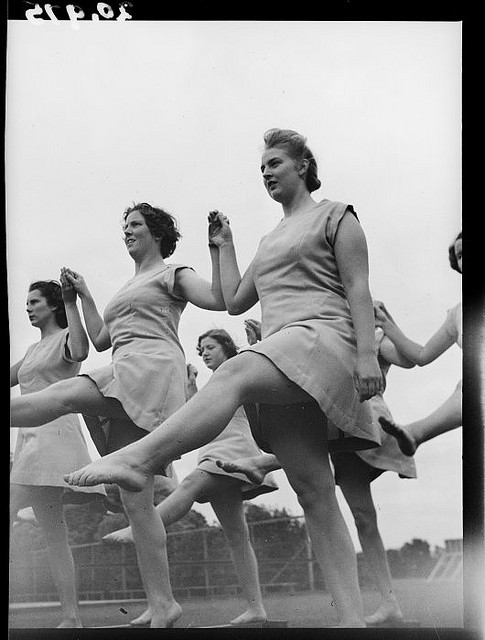 Three million copies of this recording were sent to schools throughout the US in the 1960s. President Kennedy’s Council on Physical Fitness hired Meredith Wilson, the composer of The Music Man to write the song in accordance to a program devised to help children and teens monitor their daily exercise.  My mom had no idea that children all over the United States were subject to the harrowing sound of the horns blaring in their physical education classes. 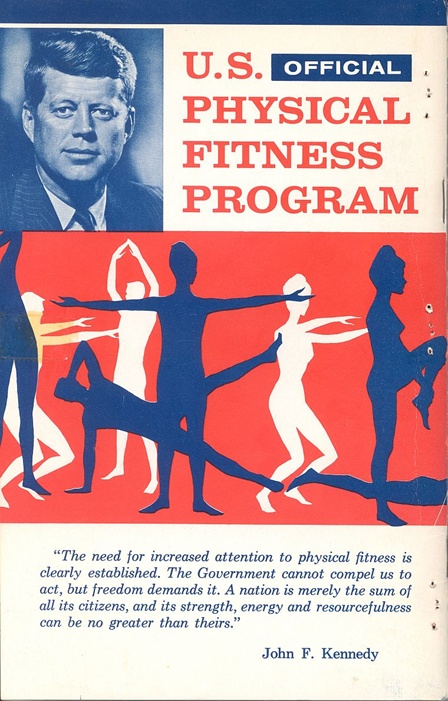 U.S. Physical Fitness Program Back Cover, courtesy of the JFK Library and Museum

To make this story even funnier, my mom discussed the song with her younger sister–my aunt Gwen.  We learned that Gwen had been accused by Miss Howe of sneaking into her office and breaking the Chicken Fat record.  This had put her at risk of getting an “N” (needs improvement, I think) in gym class! This was going to keep her off of the honor roll, so my grandma had to step in to clear everything up.  It sounds like Miss Howe never believed that Gwen had not, indeed, broken the hated record, but her grade was changed to an “S-” (less than satisfactory).

After reading other blog posts and articles about this song, it seems like there are more bad memories associated with this song than good.  The best reactions are from commenters on these articles:

“As soon as you heard those first blaring stanzas, you knew you were in for it.”

“I probably had to wait this long to listen to it so I could hear it with a smile instead of a cringe.”

“Old enough to have been exposed to this monstrosity, but somehow lucky enough to have missed it (or else blocked it out). That said, hearing it now makes me hit the mute button. . . EVERY TIME. Oh, horrible, horrible, most horrible.”

“I can’t get myself to listen to this right now.”

There are plenty of positive responses to the song as well, but they are not nearly as entertaining as those that are brought back to the agonizing days of middle school phy. ed. It seems like there were plenty of people who would get all jazzed up for their daily calisthenics with the sound of this song.  Some people even remember listening to recordings of the song in the 80s.  YouTube shows that schools all over perform the workout with this song every year–but it seems like it is more for entertainment than anything else.

While I question Apple’s judgment in using a song that is associated with such bad memories for so many people, I bet it won’t have any negative repercussions for the technology giant.  The re-worked song for the commercial is appealing to Apple loving hipsters, and it seems to be catching the attentions many baby boomers.  The best part about the commercial is that it brings people back to those awkward teenage years of gym class, however terrible and morale damaging they may have been.  Many people would never have thought of this song or those classes ever again.

My mom said it pretty well in regards to hearing the song again: “It hurts so good. It is kind of fun to wallow in those old bittersweet memories. Miss Howe and phy. ed. are my worst Jr. and Sr. high experiences. It didn’t kill me, although it probably helped kill any interest or aptitude I might have had for athletics or involvement in sports. Phy. ed. could be one of the best parts of the school day, but I don’t know any girl who liked it- most hated it. Come to think of it, Chicken Fat was probably the nicest thing she ever did for us.”

So, while I sit here and type this, I am a bit inspired to get rid of some of my pregnancy “chicken fat.”  Although I won’t be doing six minutes of guided calisthenics with Robert Preston.  I’ll stick to walking, farming, and playing with baby. 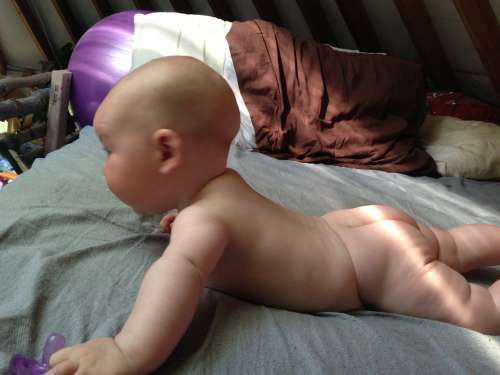 Push up! Every morning! Ten times, starting Looow. Once more on the rise!

Do you remember this song?  I find it fascinating that so many people have memories of this song, yet many had no idea that others have memories of it, too! A lot of kids just thought that this was a whacky record that their horrible gym teacher had somehow found. This is a phenomenon that probably won’t happen anymore with the widespread dissemination of everything.

I might have to do the six minute workout just once to see how it gets my blood pumping and nerves rising!

Sending you peace and love from Alaska,