Ready for Something Good: Love for the Class of 2020

Posted on May 25, 2020 by Suburban Farmgirl Nicole Christensen 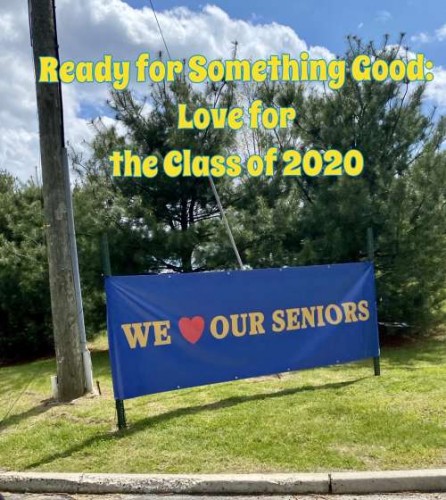 WOW! What a couple of months it’s been! So much has happened everywhere in the world – many have lost loved ones, lost jobs, or cancelled celebrations. Everyone’s lost something during the pandemic. One group that’s missed out on a lot is the graduating high school class of 2020. My daughter is a senior this year. It’s hard realizing what they’ve missed –  the fun and celebration marking the official end of childhood, the last carefree bit before being an “official” adult. I admit, I was feeling pretty sad about it, but then something truly magical happened!

High school’s not an easy four years; junior and senior years are especially hectic. The camaraderie of being with your friends one last time, some you’ve known since preschool, is a rite of passage. Events like the senior trip, senior dinner, final performances, prom and graduation are memories to remember for a lifetime. Students work hard to get to senior year. They deserve to experience those special moments.

“I have a girlfriend who didn’t go to hers {prom}, and every once in a while, she gets this really terrible feeling- you know, like something is missing. She checks her purse, and then she checks her keys. She counts her kids, she goes crazy…and then she realizes that-  NOTHING IS MISSING! She decided it was a side effect from skipping the prom.”

Kidding aside, 2020 seniors are missing out because of quarantine and social distancing; this couldn’t be helped. I’d been thinking how brave, resilient, and graceful my daughter and her friends have been during this; how this generation has been so adaptable to all the changes and disappointment.  “Distance Learning” has been tough enough, but to know that the last time you walked through your school, before lockdown, is THE LAST time you’ll know a regular school day, and without traditional year-end goodbyes and closure, is sad. I wished there was something more that could be done. Then I had an idea.

I’d seen news and Facebook posts of “birthday” and “teacher” parades – drive-bys done for loved ones, essential workers, or students. I thought, why not do a “reverse parade”, a “Graduating-High-School-Senior-Neighborhood-parade?

In my neighborhood, there’s a “Neighborhood Contact List”, created and managed by a volunteer, and a Facebook group, that keeps us connected. If someone’s missing a pet, for example, or there’s a new family to welcome, a group message can easily be sent out. There are around 100 families collectively. Of that, we have just under a dozen seniors graduating from high school this year in our neighborhood alone! Many of us have watched these kids literally grow up.

My idea was to have a “Senior Parade”, where a parent would drive their senior, car decorated, through the neighborhood while the other neighbors would be curbside, cheering to show our seniors some support and love!

I sent an email to the list and wrote a post about my idea/request, to see if there was interest- from both families with seniors and those who would decorate and cheer. I had to plan fast, as timing was crucial. I also thought it’d be neat to get a patrol car to lead the way, if we could, and perhaps someone from the fire department.

I had no idea if it could work. I knew it would need to occur before quarantine was lifted, while there was little traffic, and before the end of school, so as not to interfere with any events, even virtual, that might take place. I also watched the forecast. We experienced multiple, endless weeks of wet, cold weather for much of spring.  After many emails and phone calls, I had a date set. Though the week would be rainy, that Saturday was supposed to be pretty, in the 70s. I worked out details for the lineup with the fire department (a side street would avoid piling up traffic), and gave everyone driving in the procession details for where, when and how the event would occur. I was so worried that things wouldn’t fall into place!

Finally, on the day of the parade, I parked with Audrey on the designated street. We were early, so we could greet each arriving participant.  As the start time drew near, I prayed a little prayer that we wouldn’t be the only ones to show, and there would be enough spectators to make it really special! 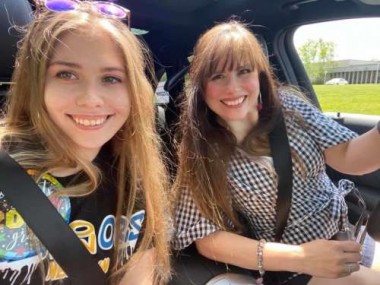 With my graduate. Dear readers, she was in second grade when I started writing here for MaryJanesFarm! Where does time go?

A very nice officer arrived first. He asked me about our parade route plan. Since we’d be driving several blocks and up and down three cul-de-sac streets, he suggested I take the lead, then the patrol car, followed by the other graduate families in their cars. 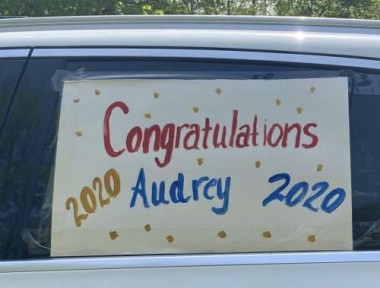 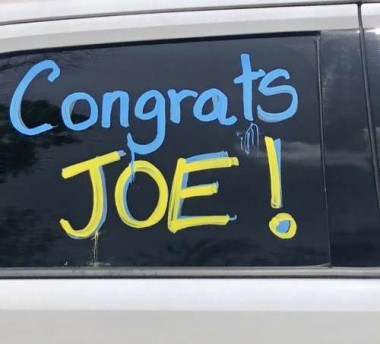 Cars were decorated and festive! It was great to see so many smiling, happy faces after long weeks of isolation!

One by one, cars carrying my daughter’s schoolmates appeared and got in line. Vehicles were decorated, and everyone was so excited! Through-traffic started to jam, so the officer began directing. 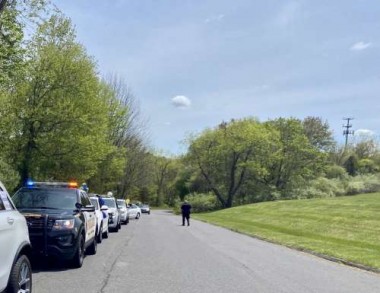 It was sunny and hot…great day for the parade!

He instructed me that once back in his car, he would give a quick siren as a signal for me to start the procession. It was then that we noticed more patrol cars arriving. As we were about to go, we looked back to see not one, but SIX police vehicles riding with us, all with lights going and sirens BLAZING! 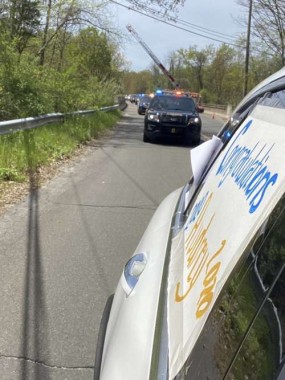 It was so loud and so exciting seeing and hearing all the sirens! (May it be the ONLY time I see red lights and sirens behind me, lol!)

As we turned that first corner, waiting for us was a lineup of shiny, beautiful fire engines – lights flashing, a crane extended overhead, with members waving and cheering as we drove past. It was so moving! 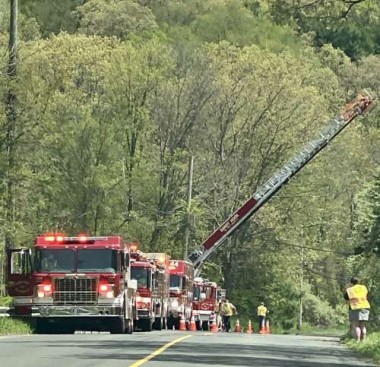 It was such a treat to see the trucks all there for our kids! Our brave members are volunteers – thank you for all you do!

The drive was thrilling and loud with the procession of sirens! As we passed friends we’ve known for 25 years, cheering and waving banners, my daughter and I got emotional. Their excitement was contagious, and it made my heart leap to see them. 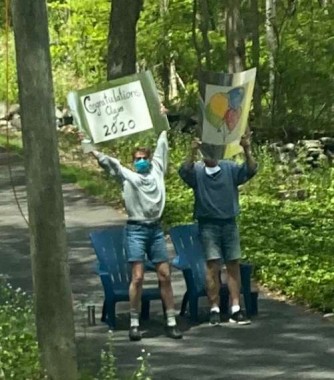 Seeing our friends made us emotional. Lisa and her daughters were our first visitors at home after Audrey was born. She also taught swimming lessons to countless local children, including my daughter.

Later, when speaking with my friend, she said there was much emotion as spectators, too. The first swell came as they set up at their driveway edge- exactly where they once waited for their now-grown children to come off the school bus. She felt emotional again as we all passed by. One by one, they waved to all our special graduates. 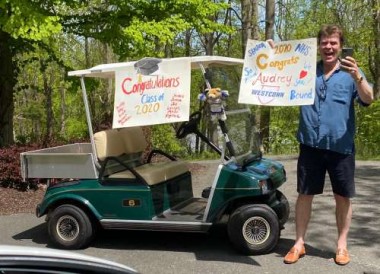 My husband had such joy when he saw us! (He was also relieved, knowing I was concerned that the stars would not align and something wouldn’t work out).

We turned another corner, with more and more neighbors cheering. Soon we passed my driveway, my husband proudly cheering. We passed more families, and more… 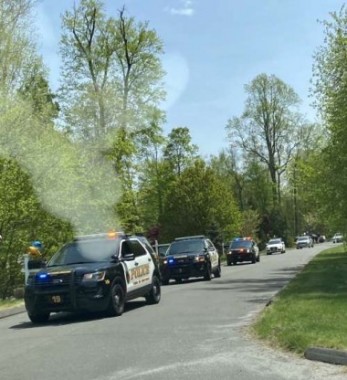 Full sirens filled the air the entire parade! It was so awesome! A huge THANK YOU to our wonderful, brave police force, for being there and for ALL you do, always!

With sirens full blast, we turned the corner to a cul-de-sac, quickly realizing EVERYONE was out, waving…cheering…holding signs! I saw my daughter’s face, teary-eyed and elated. I told her, “This is for you! You all worked so hard! Everyone’s so proud!”

We rounded back and headed down the longer street. So many people were out, (all social distancing, of course, in their driveways) – waiting for us, waving. There was cheering and shouts of “Congratulations!” It was so overwhelmingly wonderful! We held back tears the whole time. 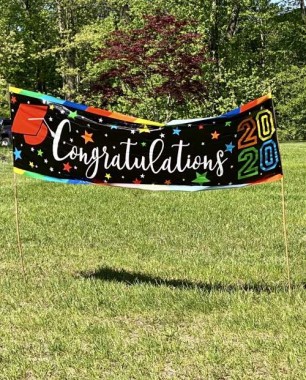 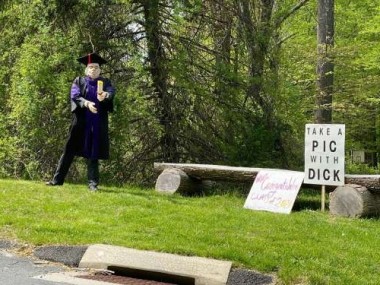 The yard decorations were all awesome! We even had a blast-from-the-past Presidential appearance! We all died laughing at the sight! 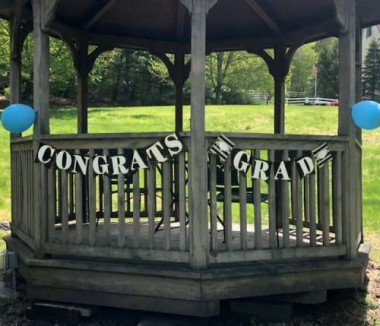 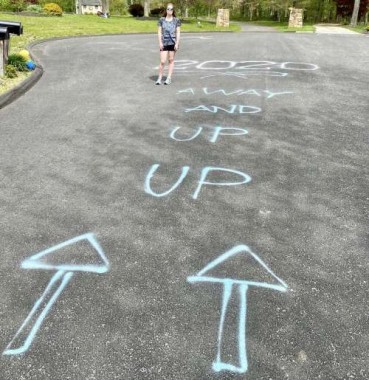 The day after, we took a walk. My daughter poses in front of one of the wonderful messages.

There were signs everywhere! Driveways were painted with chalk, mailboxes and yards were decorated, dogs were dressed up, balloons were flying, kids were jumping, voices were cheering, hands were clapping, and everyone was smiling! 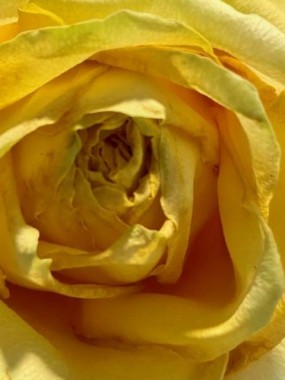 In one cul-de-sac, one neighbor handed out a yellow rose tied with a blue ribbon (school colors) to each senior. It was such a nice surprise! All the while, the sirens were blasting, lights were flashing; the entire neighborhood was buzzing with cheer! Even our local UPS man stood by, waving! Many were taking pictures or videos. All were joyous…it was a phenomenal experience we all will never forget. 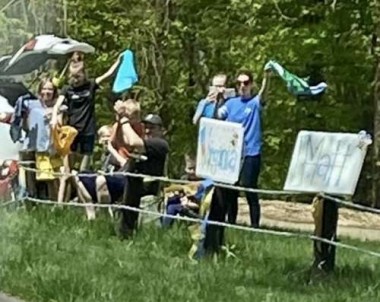 I’m not originally from Connecticut, though I’ve lived here in my house more than half my life. During this pandemic and quarantine, with such isolation, this wonderful thing happened for the kids, though we all experienced it, too. I’ve never felt more at home than at that moment.

As we drove down the final road to the parade’s end, the sirens never stopped. The signage and decor was so festive and heartfelt. The happiness carried through the entire parade, a total of 24 minutes. The “Neighborhood-Graduating-High- School-Senior-Parade” was more incredible than I could’ve ever imagined, and I’m grateful to everyone. We all will never forget it.

There’s been a lot in life to bring us all down lately, and it isn’t the first or the last time in history that some big event will knock us about. But what I love seeing is the human spirit – alive and well, rising up! I saw that very spirit firsthand that sunny Saturday afternoon. The little neighborhood parade became a heartwarming, shared, unforgettable experience. In those precious moments, we told our future generation how we are proud of them; that there’s always something good to look forward to. The faces of all the neighbors, our community…all so joyous, was breathtaking. We were all in this together- ready for something good.

Be well! Remember to leave me a comment below so I know you stopped by!

Until Next Time…Farmgirl Hugs (virtually, and six feet apart), Nicole