How are you all doing?  I’m having one of those uninspired (or perhaps unmotivated?) snaps in life, a writer’s block if you will.  If I recall this is normal for me during this time of the year, during the break between harvest season and celebration season. There’s a stagnancy in the air.  As strange as it sounds, I believe it’s good to be uninspired sometimes. For me it’s a feeling of contentment in that there is nothing that needs to be bettered, accomplished, pursued or created.  I can just go about with the daily rhythms of life and the demands of various responsibilities without daydreaming about what I could be doing or feeling down on myself for not accomplishing all of the things.

Although dinners have been a bit boring. Sorry, family. 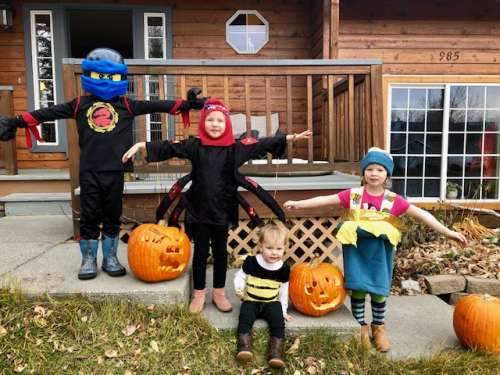 Perhaps my last bits of inspiration were spent up making Halloween costumes. It was a warm Halloween up here! We had a spider, bee and honey pot (and Ninjago friend).

I think some of this un-inspiration comes from the extended fall weather we are experiencing in Alaska.  It has snowed at lower elevations one time and it was a typical early season snow that was gone by the afternoon.  Since then it’s been relatively warm and windy.  I even still have some plants outside that won’t quit!  We haven’t frozen hard or long enough for some of those hardier plants and I bet the plants in my greenhouse would be close to thriving if I watered them (and maybe with more sunlight…)! Unheard of during my time in AK. 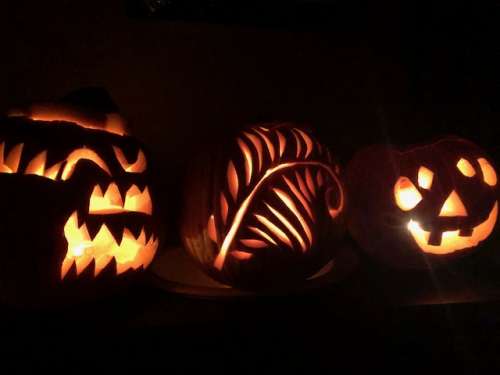 One more Halloween photo. Our pumpkins–one scary, one happy and one neither!

However! Just a minute ago I received a “Winter storm warning” on my phone!  I’m not holding out too much hope…but there is a glimmer in there.

Every year I write about snow and skiing and sledding and snowy activities.  I’m obviously obsessed with the white stuff, and I thought we had chosen a great place to maximize our snow exposure.  So, what’s a girl to do when those frosty flakes fail to fall? 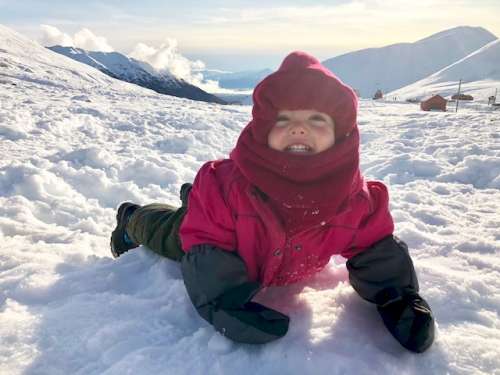 Fern in the snow for the first time this season! (In the mountains)

I’ve come up with a comprehensive list of what we have done to battle our blizzardless blues:

It will surely snow if we complain about the lack of snow, right?  Knock, Knock, mother nature! You are more than fashionably late.  This shade of greenish, brownish, grayish, windiness is SO mid-October.

If not outrightly complaining, it is also acceptable to pretend not to hear the people who are happy that it hasn’t snowed yet. “What was that? Yes, it would be much more beautiful if we had some snow on the ground!” 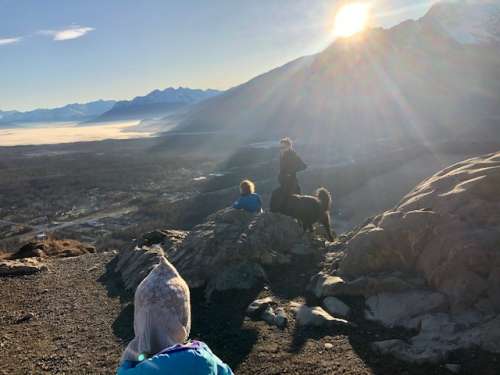 Still isn’t too shabby without snow :)

Hey, if the snow holds out long enough, stores will put their snow gear, shovels, scrapers and snow blowers on sale to clear out inventory for spring! I have yet to find the ideal shovel, maybe I’ll have time to scope out a new one to test this year (although I’m starting to think a steel grain scoop shovel is the way to go!).

Okay, with all joking aside, we have made the effort to find snow at least once per week.  We can drive up into the mountains about twenty miles from here and there is snow!  And it’s not just a little sprinkling, it is several feet deep in spots.  The cross country ski trails are groomed and the sledding is pretty good.  There hasn’t been fresh snow up there in a while so it’s getting pretty crusty and beat up, but it’s better than nothing.  Opal is turning into quite the cross country skier!  She loves going down hill, and I couldn’t be prouder.  The only problem with this situation is that all of the other snow lovers have the same idea so it’s been a zoo eery time we’ve been up there.  At least it’s a winter wonderland zoo! 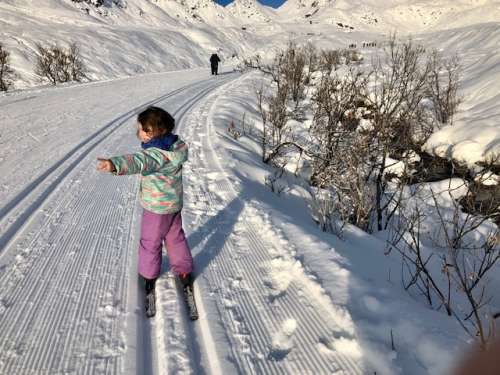 Opal–Skier extraordinaire! It felt like spring skiing that day.

We have done many things “one last time” over the last few weeks–riding bikes, wearing sneakers outside, going out without gloves/hats/snowpants/etc.  Opal even asked to fill up the kiddie pool last week, haha!  Looking back, maybe I should have gone along with it; but in the moment i was not a cool mom. The playgrounds and trails will still be fun for the bigger kids and adults come snow time, but they are a bit cumbersome for the two and under crowd once they can’t use their thumbs.  When will the kids start to call me out on the “one last time” line? 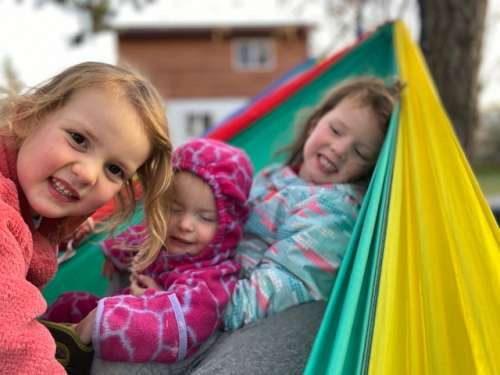 One last afternoon in the hammocks.

This mostly involves drinking hot chocolate, cuddling up with blankets, having family movie nights (where mom falls asleep twenty minutes into the movie), and wearing winter gear even if there isn’t snow. The temperature has been lingering near freezing many days, so insulated coats and snow pants have kept us cozy during outdoor adventures! 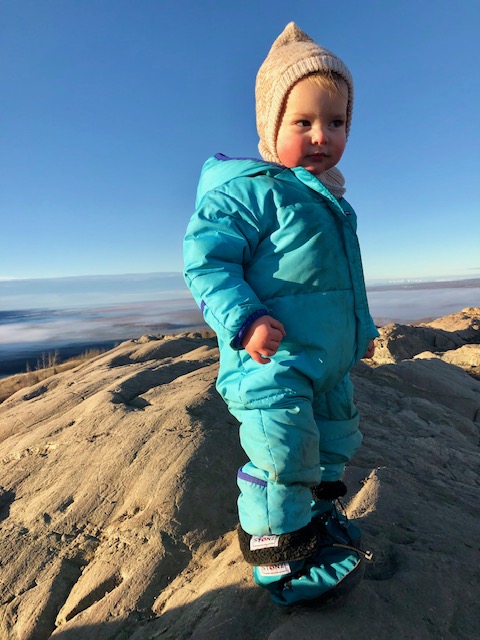 Fern all bundled up with no snow to play in. But the views were excellent!

There is no bad weather, only bad gear and bad attitudes (try that argument with someone who has been through a natural disaster…).  Really, there is beauty and fun in all kinds of weather. We have had fun tree climbing and finding objects that would otherwise be obscured by snow or summer foliage.  We’ve marveled at the patterns of water swirling under thin ice over creeks and puddles and even found some insects to follow and study. 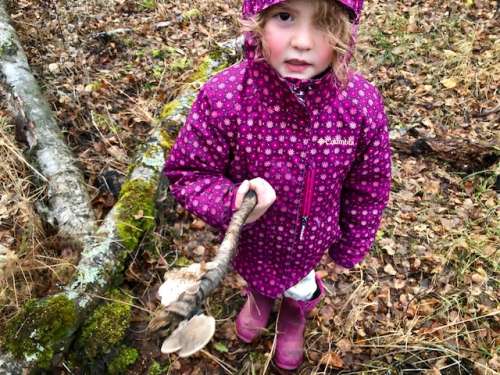 Nature walks yield fun finds! Ava with her portable shelf fungus stick, a gift for me!

So now, we wait and check in on our list.  Perhaps I’ll finally wax my own skis this year, or do a thorough job of yard clean up before the white stuff comes.  I know it’s snowing or has snowed in many parts of the US right now. If you have it, enjoy!  We are Jealous up here in the balmy north!