Posted on May 14, 2019 by Ranch Farmgirl Dori Troutman 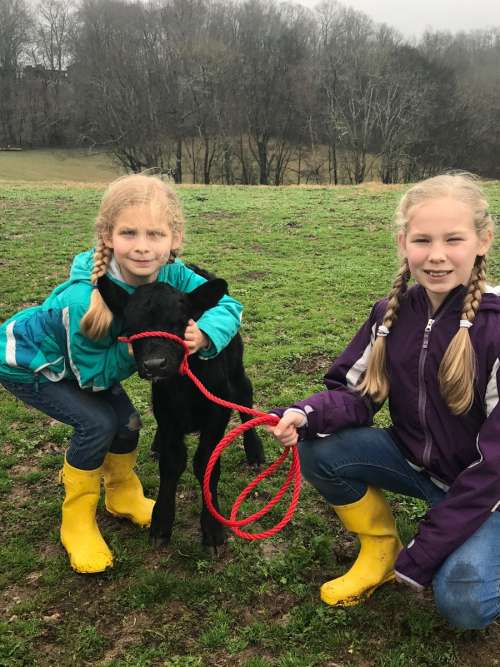 I think it’s time to write about Buddy.  Sometimes I find it hard to write about our cows and our little farm because it is such a small scale farm and despite the fact that I grew up with generations of cattle ranching in my blood, I still feel that I really don’t know anything about cows!  And sometimes writing about things on the farm are emotionally hard.  But what I do know is what my heart tells me!  And so I’d like to introduce you to Buddy! 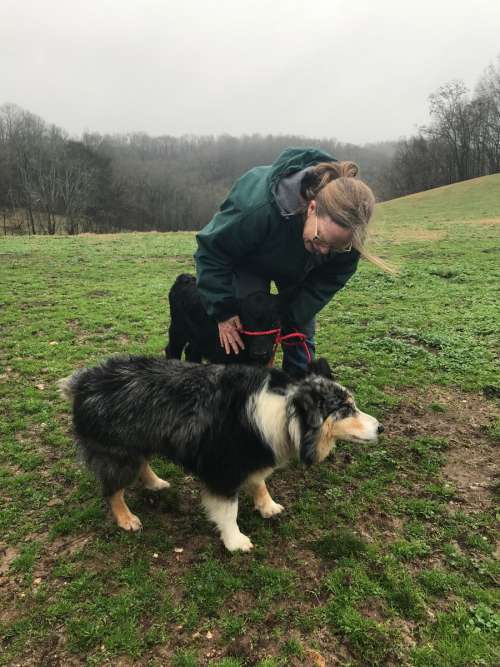 Buddy is a twin that was born on our farm this spring.  Most of us would think that having twin calves is a great thing (a two for one deal right?) and we’d be jumping for joy.  I remember the first time we had twins born on the farm and I called with excitement to tell my Dad and I was so shocked when he said “Well that can sometimes be a bad thing”.

So before we get too deep in the story of Buddy, I’ll tell you very quickly why having twin calves can be a bad thing!

First of all, there’s the subject of milk.  A Momma cow has what is called Colostrum in her milk and it is the most important thing for a calf to get within the first few hours of it’s birth.  It is the “first milk” that is often referred to as Liquid Gold!  If a calf gets the colostrum within the first hour of it’s birth it greatly increases the chances that a newborn calf will not just live, but thrive.  With twins it is very questionable on whether both of the babies received that colostrum.  Chances are pretty good that only one received it.  And as a result one of the twins will be weaker and not as likely to live.

The next negative thing is whether or not the momma cow has enough milk for both babies.  If she is an older cow (which was true with Buddy’s Momma) then she might already be starting out a bit on the lean side and providing milk for two babies just might not be possible.

There is also a great possibility that one of the twins will be sterile.  If the twins are female and male; then the female is called a Freemartin and 90% of the time she will be sterile.  There is a very complicated explanation for this (to me anyway!) but you can do a google search on it and read all kinds of interesting articles!  One thing I do know is that it’s not desirable.

And the last thing, and really the saddest for me, is that if one of the calves is a weaker one then the Momma will likely abandon that baby.  And if you’re not monitoring the situation closely, you can very quickly lose that calf.

So now that we know all the negative things about twins, let me tell you about Buddy! 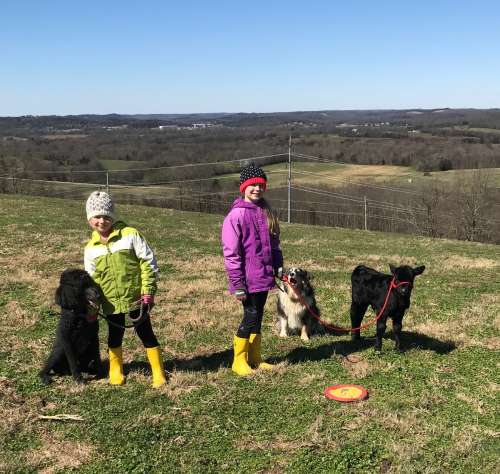 Buddy was born to Old Red.  Personally she’s my favorite cow on the farm.  She comes running when she’s called, she’s always the most interested in what is going on around the farm (hanging out to watch us when we’re working in the flower garden!), and she’s a very good Momma.  But this spring she had twins.  We experienced twins born on the farm to another cow about 6 years ago, so we were prepared for what to expect.  We watched her closely for the first 24 hours and at the very first sign that she was actively nursing one baby and ignoring the other one, we charged in and kidnapped the abandoned baby! 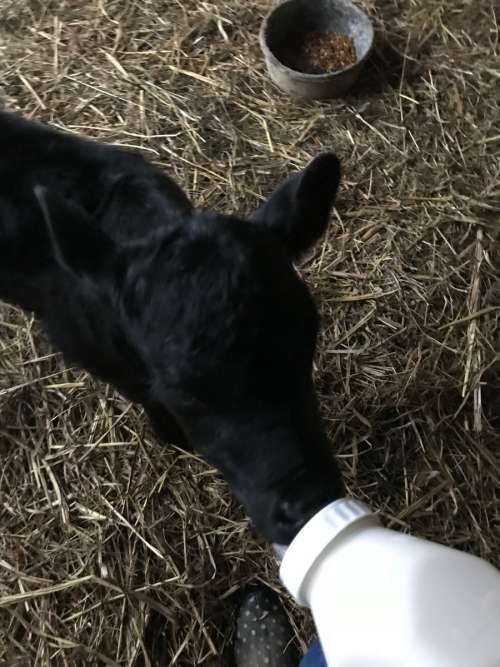 We put him in the little barn on the hill by our house and I went to work trying to get him to take a bottle of colostrum.  If you’ve ever had to give a newborn calf a bottle for the first time, then you know it is honestly the most frustrating thing to get them to suck.  Sometimes it takes hours and hours.  I tried every trick I could find online.  I called my Mom and tried her tip; “Put a cloth in milk and see if he’ll suck that”.  I messaged my friend Kim and got her advice, which was; “Don’t give up, he’ll get it eventually.  I’ll come help you tonight if he hasn’t sucked by then”.  I cried.  I begged; “Come on little buddy you can do it”.  Every hour I’d go back to the barn and try again.  Finally that night I had success!  And you can’t believe how excited I was!! 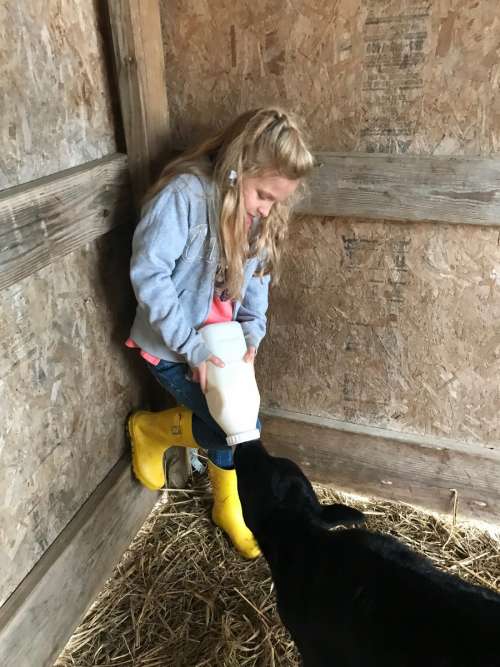 The amazing thing is this:  all they have to do is suck that big rubber nipple once and you are good to go!  By the next morning that little guy was sucking his bottle in 3 minutes!  (Yes, I timed it!)  My grand-girls came up every day to give him a bottle, put his halter on and teach him to lead. 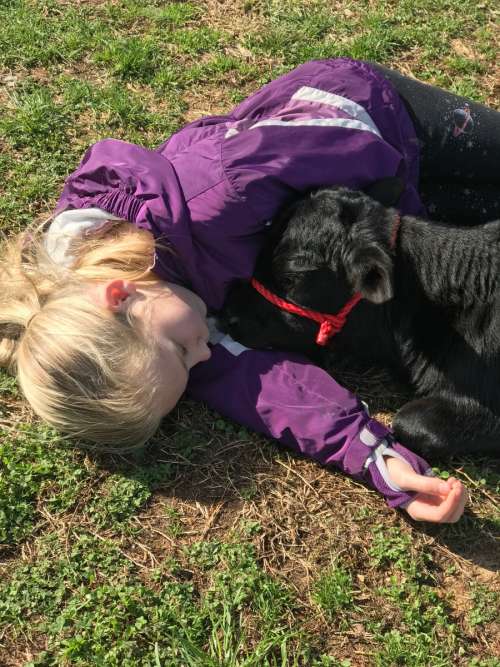 The bond he developed with the girls was precious.  One afternoon I realized that Jillian had been out with him for a couple hours and when I went to check on her, this is what I found!  She and Buddy… sound asleep in the warm spring sunshine! 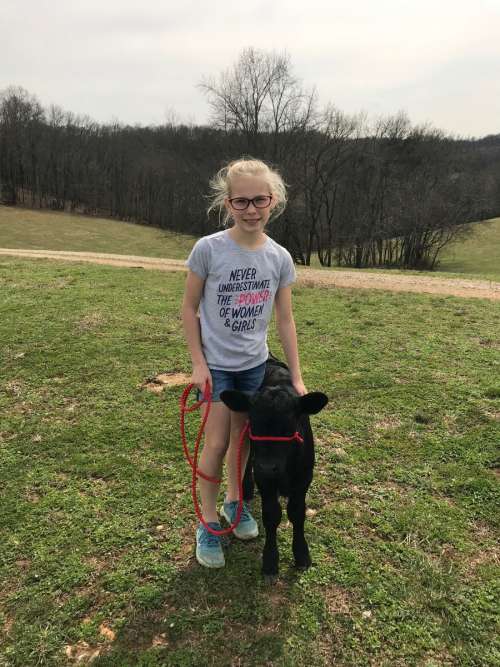 Buddy grew and thrived.  He got to the point where he could suck his bottle in under two minutes.  He began eating his grain.  When we let him out everyday for a few hours he was grazing.  It was time to graduate Buddy to life with the herd. 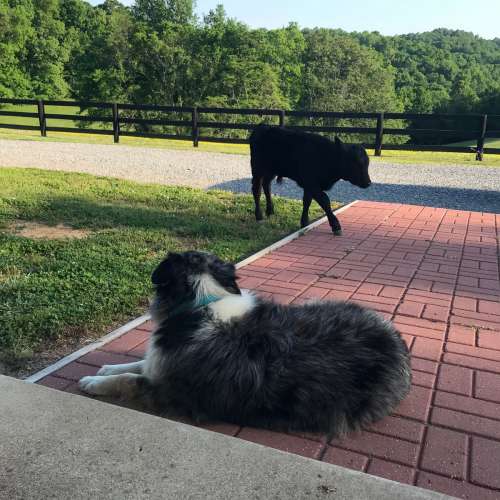 Buddy thinks the yard is his home too!

He is now three months old and we’ve turned him out with the rest of the cows full time.  He comes up every morning and every evening for his bottle and then he slowly makes his way back to the herd! 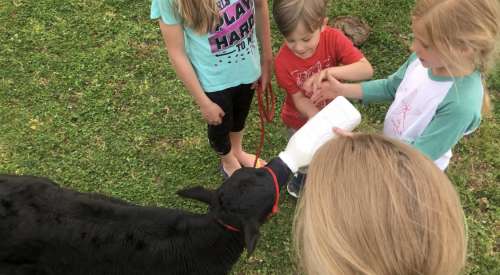 The hard facts are this.  Buddy will not always be our sweet little Buddy.  He will grow, get big and then we will sell him at auction.  This is hard on all of us.  Before we ever let our grand-girls give him that first full bottle we made sure they knew and understood the purpose of Buddy’s life.  They’ve grown up around the cows and we’ve never deceived them about where the steers go!  This is no different for Buddy. 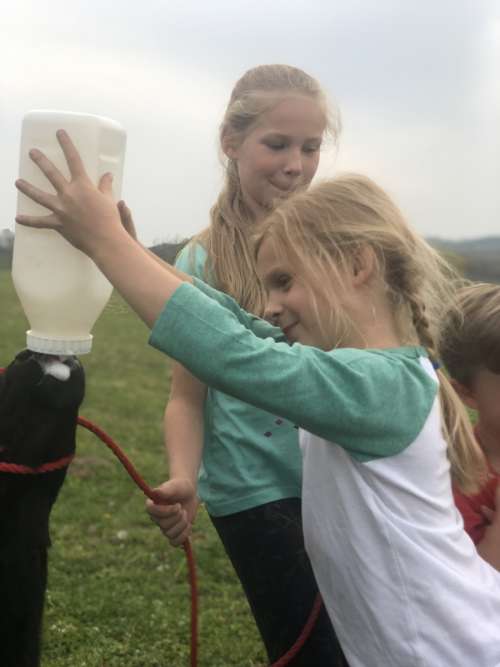 Buddy can guzzle his bottle in a minute now!

People have asked us why we can’t just keep him as a pet?  The answer is that a 1000 pound steer doesn’t really make a very safe pet!  Buddy is already to the point where when he sees us around the farm he comes running, knowing we are his source of that warm, sweet milk.  Have you ever watched a darling calf butt its Momma’s teats for milk?  Well… having a fat little calf start butting you for milk isn’t exactly a pleasant experience!  So no… we won’t be keeping Buddy for a pet.

That is the hard honest fact. 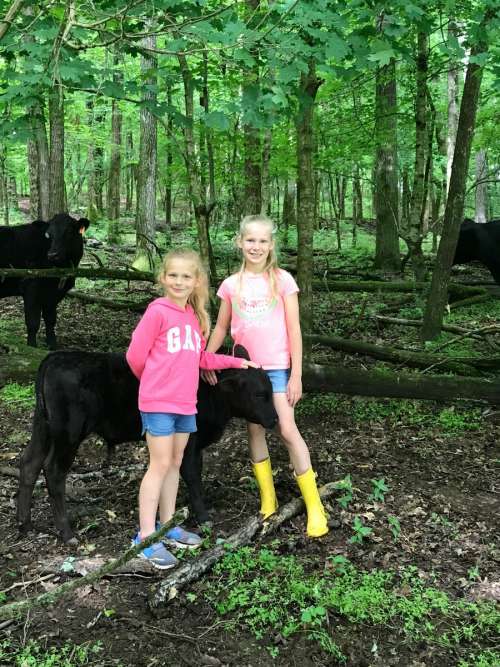 Hiking through the woods and Buddy calf has to get some love!

Our conversation to the girls has been this:  we love our calves and give them the very best food and the very best life possible while they are in our care.  And we have a heart of thankfulness for what we receive in return.  I was so proud when I heard my grand-girls explain to a friend how they will feel when Buddy leaves our farm; so open about how they’ll miss him but so mature about his purpose.   Such precious girls loving and caring for their precious Buddy calf… who is quickly getting very ornery and not so sweet and precious any more!!  The day is quickly coming when the little girls running up the hill to our house may not be very safe with a calf, bigger than them, chasing them up the hill and butting them for milk!

So now you see why this was a hard story for me to write.  But this is the reality of cattle farming.  In the meantime… we are loving our little Buddy and laughing histerically when he comes running up the hill licking his lips and wagging his tail in eagerness for his bedtime bottle!