You Have an Auntie Mame…

…I have an “Auntie Margaret.”

I’d like you to meet a friend – two friends, actually. When I first moved into this town, coming up on twelve years ago (my, how time flies!), I met Margaret. And just recently, I met Kate. I love these two gals individually, but I had no idea how they’d get along with each other – you know how it can be when friends of friends meet. They’re very different – Margaret is ninety years old; Kate is eight. Margaret is one tough old farmgirl; Kate has only been working on the land for about 4-5 years. Well, it turns out that these two are fast friends – not only that, but when they’re together, they’re a force to be reckoned with. Margaret is my farmgirl mentor, friend and “auntie.” Kate is my horse. C’mon over and say, “Hello!”…

I’d like you to meet Margaret first. Now, SHE is an original – I’ve not met anyone like her, ever, nor do I ever expect to. Margaret was raised in a wine family – meaning that they owned and ran a winery. She grew up in a lovely home right in San Francisco and in California’s wine country – always doing the unexpected, always turning heads and ALWAYS working with animals. Just so you can picture her, she’s about five feet tall, stocky with short gray hair, glasses and arm muscles that a twenty-year-old would envy; always wearing pants and either a T-shirt or a button-down men’s “camp” shirt; a watch with the face on the inside of her wrist (because she would “always break the #@$% glass on the front”), and a beautiful prized turquoise ring with a bear claw in it… that she bought from an indian… in the 1930’s.

When I first moved here to Elsinore, I met Margaret. My then-boyfriend (and now husband) hadn’t moved down here yet, and I was living by myself for a couple of weeks in a total disaster of a farmhouse. This old house hadn’t had any love and care in such a loooooong time. One of those first mornings, out of hunger and a healthy fear of disease from cooking on the stove that was here, I decided to go to breakfast at the local cafe (which is wonderful I might add). There, I met a very forceful, very short and very loud Margaret, who marched up to my table, introduced herself and then demanded to know if I was a “teetotaler.” When I was too startled to answer, she said, “Good, then. Come on over for a martini.” I have to confess, I was too nervous to take her up on the offer, and I put off going to her house for quite a while – weeks, actually. I’d never run across a person quite like her. But then simple curiosity got the better of me (and I kept thinking of that old saying about curiosity and the cat the whole time I walked down to her house) and I went over for a drink. My life has never been the same. 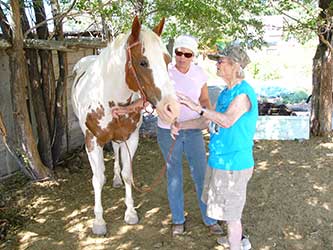 So, I arrived at Margaret and her farmgirl sister De’s house, and knocked on the door. Margaret yelled “COME IN!” from inside, and in I went. I sat down at the kitchen table, where De was sitting drinking coffee and chain smoking in her rhinestone-set horn-rimmed glasses, and was handed a bourbon and water “with lots of ice.” The drink of the house. Bourbon and ice, with just enough water to say that, yes, there IS water in it. I don’t like bourbon (truthfully, it tastes like dirt to me – not that I’ve eaten a lot of dirt to be able to compare, but you get the idea…) I’ll tell you, though, that afternoon I drank it like it was lemonade. I just couldn’t stop listening to Margaret’s stories. She was amazing. And that’s how it all started.

I asked her about herself and how she and De came to live in Elsinore, and boy, was I in for a treat. Margaret was raised with everything that a child could want – family (aunts, uncles, grandparents – the whole shebang), lovely clothes, “things,” vacations, pets and beautiful horses, riding lessons and the like. She had storybook-like Christmases with huge trees and fancy parties at home and summers in the family mountain retreat, fishing and hiking with the best of them. Famous musicians visited her home. She sang opera. It sounded like a storybook childhood.

This is the same woman who also had and used the first “modern” hay baler in Modoc county, California. She raised and showed prizewinning pigs. And dogs. And sheep. She attended CalState Berkeley for a while, and she was a Marine in WWII (and has a mouth like a sailor to prove it!). She was the Commanding Officer of our local American Legion post. She and De traveled around the country for SEVEN YEARS in an RV (she called it their “motorcoach”), she was the youngest person at the time (at age eight) to climb Mt. Lassen in California, and has climbed all the major peaks in the Tetons. Was there anything she didn’t do or hadn’t done? Well, yes, actually – she didn’t cook, clean or do laundry (well, not unless she HAD to). But she could build any fence, outbuilding or gate system that a farmgirl could want, she could fish any lake or stream, she could pull and back up a large trailer, and she could do it alone. We know Margaret so well by now that we just call her, “Auntie Margaret.” My two little boys haven’t known life without her.

In addition to having her very own way of relating to life, Margaret has a certain je ne sais quoi when it comes to addressing emotions, as well. Take, for example, two times that happened in the past week or so.

How does my horse figure into this equation? About a month ago, “Kountry Kate” (why, oh, WHY do people spell like that?!?!?!) came to live with us. She is a gorgeous, eight-year-old Paint. I am fully in love. Utterly. Completely. I feel about Kate much like I do about my cow, Evelynn, except in a “horsey” way instead of a “cowey” way. She came to us through a rescue program, and we are SOOoooooo glad to have her. She’s spunky, and not flawlessly trained, so my husband and I are the only ones who ride her right now. We’re hoping that William (he’s seven) will grow into her. Right now, he rides “Doc,” our good ol’ horse, given to William by one of his cowboy friends on his fifth birthday. Doc is about twenty-eight years old and just perfect. We love Doc – and he takes care of Will. They make such a wonderful team – just like a sort of “Norman Rockwell”-horse-and-boy thing… but… back to Kate. We’ve been borrowing a Western saddle for her, and she’s doing really well. More on her later…

Over the past few weeks, Margaret has been showing me her old photo albums and photographs. They are absolutely stunning. Her family was so handsome and did so many interesting things. And the clothing! Absolutely gorgeous – can you imagine women hiking to the bottom of the Grand Canyon, accompanied by about a hundred burros toting supplies, in long, white skirts holding parasols? Let me tell you. It’s true. I’ve seen the photographs to prove it. Some of the photos, however, show Margaret with the happiest face and brightest eyes – and those are the animal photos – specifically, the horse photos. Margaret was a very accomplished rider in her day – and I never really knew this until I saw some of these pictures. There she is, smartly dressed in English riding style, jumping her beautiful horse over the highest jumps – she was saying that most of them were four-feet-six-inches high – in such a relaxed and comfortable way. She rode hunter-jumper courses for years. She looked at home. Truly at home.

When Kate first came to our farm, Margaret walked out to the corral and looked at her, but didn’t really make any “big deal” out of it. She didn’t seem that interested. After seeing these photographs, however, I couldn’t help but press the issue a little bit with her. I started asking her if she liked Kate. The answer? “I suppose she’ll do.” After a few days of this sort of thing, I sprung the idea on her with a casual, “Margaret? Would you give me riding lessons?” The answer this time? “Will you just do what I say, no questions asked?” I said that I certainly would, and we had a deal. I was really excited – and a little bit (okay, a BIG bit) nervous. Margaret can be very direct in her criticism. I’ll leave it at that. 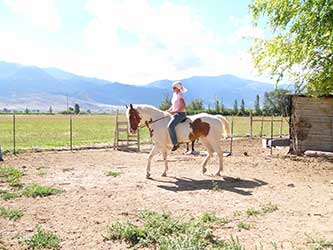 A couple of weeks ago was our first lesson. That evening, Margaret and I took Kate out to the corral. Margaret said that I would ride bareback, and bareback I did ride, indeed. She made sure I had the correct posture from head to toe, and then stood in the center of the corral. I think it was then that she made the transformation. The tough and loud Margaret that I had known for over ten years changed into a genuine teacher – a person who truly wanted me to understand the horse and the horse to understand me. No loud voice; no quick movements; no immediate criticism. Margaret had become who I believe she truly is. She had this very real, calm “presence” that only shows through in people who are right where they are “supposed” to be. After twelve years, Margaret was showing me a part of her that I had never seen before. Her confidence was actually visible – no need for her to defend her actions to anyone – she knew exactly what she was doing. It was within the bubble of her confidence that I started to feel comfortable within myself on Kate. I could have ridden with her teaching me for days…but my body? Not so much so. After that half-hour, my legs were burning, my smile was almost stuck and I could have just hugged Margaret. I didn’t. I held her hand and gave it a squeeze. She squeezed back; it must have been okay. We’ve been riding together almost daily since then. These photos are from yesterday morning’s lesson. 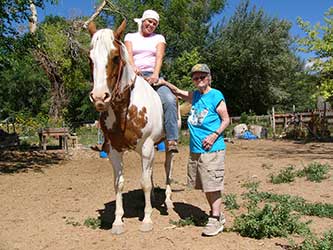 So, thank you, “Auntie” Margaret, for the friendship, the “familyship,” the riding lessons… for all of the lessons you’ve taught, and continue to teach, to me and mine. We love you, and our lives are truly richer and better because we know you. Thank heaven for family. And… it even looks like Kate is trying to blow you a kiss…

So, this last Saturday (August 7) I went up to the “big city” and bought myself and my little one approved, real riding helmets. We’re wearing them each and every time we ride now (and Margaret gives me grief each and every time, too – with the admonition “back when *I* rode…). THANK YOU for reminding me that there’s really NO good reason not to be as safe as we can. Even if you ride “western.” Even if you ride on “soft” dirt. EVEN IF your Auntie Margaret gives you a hard time. You gals are awesome. I read and love every comment, and some even change what I do! You all are WONDERFUL!!!