Who Could Ask For More?

[Previous Rural Farmgirl, April 2009 – May 2010]
In today’s world it may not be politically correct, but I grew up playing that childhood game of cowgirls and Indians, knowing full well that if you were to mix in a little gypsy girl with the cowgirl and the Indian, shake it, then bake it, you would have me: a rural farmgirl. I, like many of my farmgirl friends, do not really “fit” into any one mold. I am as eclectic in my thinking and in my interests as I am in the blood that runs through me.

Oftentimes I have found myself a little jealous of friends who have one nationality or one deep love and who are able to wrap up their self-description into one seamless title and tie it with a bow. I love listening to stories of their rich heritage, with their family roots dug deep into the soil of life, and their traditions that, unlike mine, are un-fragmented when laid out for all to see. Nevertheless, my story is what it is, and that is why, I suspect, I love the title “rural farmgirl.” It is the only title big enough to encompass all that I am, the only place I know of where you can add those three ingredients and come up with 100 percent of anything.
Those who know me personally know full well, that I am mostly bohemian in both my bloodline and in my nature, having received that trait from both birth parents. That leaves about 1/4 of me cowgirl (having adopted that from those people I so admired in the little town where I grew up), and 1/4 Native American (which not only runs through my veins but also through a lifelong heart connection with a couple whom I have known as long as I remember).
I lovingly refer to John and Sarah as my Godparents, believing that they came into my life when as a young child I needing a safe haven. I used to escape to their home when things in mine became too much to handle. Their home is still the place I can run to when I need to be still and listen to the cries of my own heart. A place, where I can go to find “me” as I trust my own voice there, as there, the outside world is silent.
On a trip through wheat country this summer, I was having a particularly bad day. Un-able to head to Sarah and Ate’s (“father” in the Lakota language), I found myself on the road desperately trying to deal with some hard things that life had thrown my way, things that had taken root and were now sitting there, because I was either unwilling or simply unable to spend the time and energy to deal with them. While slowing down to pass through a small town along the route, out of nowhere a badger crossed the road, right there in the middle of town. Now I do not live in this community, but I cannot image that badgers crossing the road are a common occurrence. 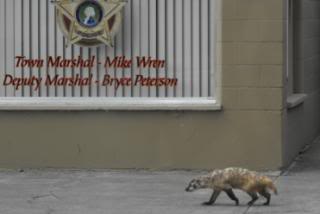 Yet there he was, in his entire splendor. Through the tears that had been streaming down my face, I was able to find the humor of such a sight and grateful for the distraction. What are the chances, I thought. Without hesitating, I pulled my car to a stop, snapped a few pictures and promptly called “Ate” to see what it could possibly mean.
Through our conversation, I learned that the Native American tradition believes that each person has nine different animals that will accompany him or her through their life, acting as guides. Different animals come in and out of our lives depending on the direction in which we are heading and the tasks that we need to complete along our journey. Ate went on to explain that having a badger as a totem symbolizes courage, fearlessness and tenacity. On this given day, the part of the description of the totem that “spoke” the most to me was, “A badger is a remarkable digger and can get beneath the surface easily. This ability ties the badger to the mysteries of life where creation is stored. It also symbolizes a strong connection with plants and animals and can teach how to align with life both above and below ground.” It was a message I needed to hear.
Whether one chooses to believe in Native American traditions, old folklore, wives’ tales or superstitions is a personal choice. On that day, on that road, I needed the message that one little badger brought to me, a reminder that I had the courage to go down the road I knew I had to go down. I needed to submit myself once again to the criticism that comes with speaking up for what I know to be true risking yet again the acceptance and love of the people I have spent a lifetime seeking.
I needed that little cheerleader, dressed as a badger, to tell me that I could be fearless and not buckle, even as my heart was breaking. Mostly I needed to be tenacious about the things in my life that matter the most; I needed to be able to fight the good fight, in order to live my life without regret and with the integrity that I desire.
I have come to love that little badger and the fact that he is associated in a positive way with creation. I have learned that having the life I want to live is under my control. I get to be the writer of my story, but it does take courage, fearless living and tenacity to write it and to edit it the way I want it to be written. I cannot write the script for what others may say to me or about me. Nor can I control their ability or inability to love me. I can however, control how I choose to react to it and how much weight I allow it to carry in my day-to-day thoughts.
While in Chicago recently, MaryJane, having heard the story of my badger, picked up a stuffed animal and some organic skin care products for me from a company called, “Badger,” teasing me that I could apply to be their spokesperson. The “little guy” sits at my desk as an everyday reminder that I have him as a totem. He makes this rural farmgirl happy just knowing that he is there for me to call upon whenever I need to.
It is, in moments like these that I am thankful for the blessing that comes with being a hodge-podge of nationalities and experiences. Each thread of my life woven together as tightly as a cowgirl’s horse blanket, yet as connected to the world around me as my native fathers would expect. All while being as free-spirited as any gypsy girl could hope to be. Who could ask for more?