When the strawberries and sweet corn are ripe, charcoal grill smoke fills the air, and days seem lazier just because they’re longer, I think more often about a particular kind of relationship. It’s less analyzed than the one with your parents or your menfolk, more fragile than the bond with your sibs (who, love ‘em, hate ‘em — or both simultaneously – tend to boomerang back at you your entire life), and yet potentially more enduring than ties with even the best of friends, because with this relationship, there’s blood involved.

Have you noticed how a little-discussed byproduct of scattered families is scattered cousins?

That’s me, the lone brunette (above), in typical summer cousin mode: Picnic table and coloring books. Leaving church on Sunday, my sibs and I would always ask, “Who’s house are we going to?” (Or, “Who’s coming over?”) By “who” of course, we meant which cousins? Juli and Terri? Jennifer and David and Scott and Jeff? Jimmy and his sisters? Dennis?

A really lucky answer was a Boulan Park cookout, where my cousins’ cousins assembled in lawn chairs with coolers full of burgers, homemade peanut butter cookies, beer (for the dads) and red pop and orange pop (for us). (I was oblivious to everyone’s exact relationships until I was a grownup.) Or I’d learn that my cousin Jennifer was sleeping over at her grandmother’s house, right next door to my grandmother’s house, which meant we could play Marathon Monopoly for, oh, five days running. Holiday, birthday, first communion, graduation — all led to a family party. But mostly we’d gather because our parents liked to hang out.

Some summer days, my sister and I rode our bikes eight miles to Juli’s and Terri’s, imagining ourselves on horseback on the open plains, oblivious to the fact that we were on suburban sidewalks next to busy roads (and helmetless, of course). Once there, we might swim in the above-ground pool, dig worms. Make up a play starring the dress-up box of vintage great-aunt clothes. Ride those “horses” some more. Beg for a sleepover.

(A favorite cuz memory: Spending an Earth-Day-inspired morning with Juli making “Give a Hoot! Don’t Pollute!” crayoned signs – which we then spent the afternoon plastering all over the neighborhood.)

Some of you are probably lucky enough to spend your Fourth of July fests and Sunday picnics with your cousins still. After college or marriages, most of mine just moved around too much. As did I. We continued to get together with our immediate families. But the cousin connections mostly floated away, just out of reach. We’d hear one another’s headlines (from our parents) and exchange Christmas cards, but all a bit once-removed.

Check out this cornucopia of girl cousins — a cousincopia!  — me  at 12 with two sisters and four first cousins. (Can you pick me out?!) 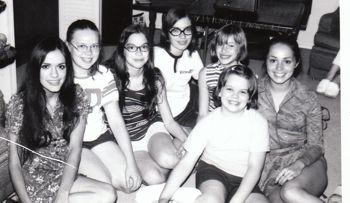 Thanks to the wonders of Skype, Gmail, Facebook, et. al. , though, these cousins and I have been rediscovering one another after a lengthy lapse. Thanks, too (perversely) to the funerals that go with the midlife territory, reconnecting us ex-kids as we say goodbye to moms, dads, aunts, uncles. (It was nicer when weddings accomplished this, but we’re sort of in the lull between our own weddings and our children’s.)

My cousin Juli, for example, just earned an MBA from a university in England and, had I calculated the time better, I might have watched a live feed of the event. Her daughter is my Facebook friend, and there’s a certain comfort in at least keeping tabs on the next gen down. Another cousin, MaryJo, whom I only saw once a year in my dad’s distant hometown (and who, a little bit older than me, seemed like a mysterious adventuress) emailed out of the blue to urge me to write about this inspiring familiy, who live in her town; that led us to catch up with one another. Cousins Chris and Dennis and I have become penpals. (E-pals? Keyboard-pals?) Even cousins’ wives are newfound friends — one post soon I’m sharing Tracey’s good-for-you cookie recipe, thanks to a nice reunion at my dad’s pre-burial brunch, of all places.

Affter cousin Ricca mapquested her way to my N.C. house on a drive from Florida to Michigan last year, we parted wishing we lived nearby enough for a monthly girls’ lunch. With all the girl cousins! (Growing up, glamorous and cosmopolitan Ricca was Ringleader Cousin, teaching the bookish, glamless me to avoid cheap Indian cotton, buy Lancome mascara for the longest lashes, follow my heart, be brave, and drink mint tea at night…I’d love to serve her some homegrown, home-brewed mint tea, inspired by Mountain Farmgirl!) Why just this very morning she emailed a batch of us cousins an inspiring Thoreau quote: “Go confidently in the direction of your dreams! Live the life you’ve imagined.”

Here we are last year: (She’s in the above foto too!) 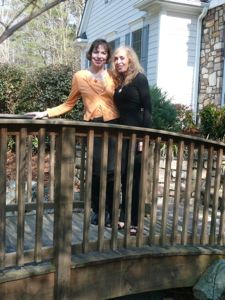 And the aforementioned newly-minted MBA Juli? She’s been a sweet sounding board in recent times for me, and not long ago helped me make a really vexing decision by asking, “What happened to the cousin who was our fearless leader and directed our plays and made up our games and adventures?!”

Even more than siblings (maybe because we log less time together overall), cousins idealize one another. How handy, years later, to be remembered as a fearless leader, an adventuress, an anti-pollution crusader, a tastemaker, an inspiration.

My own poor kids don’t have any cousins within an hour’s radius, like I once did. Connecting them all takes more work and planning. But we their parents try, because we remember our own cousin bonds. (Below, a scene from a girl cousin beach trip last year.) These kids may not have so many Monopoly Marathons and lazy-Sunday picnics as we did, but we’ve noticed that they, too, now stretch their semi-annual contacts with text messages and status updates.

Virtual sweet corn is better than none at all. 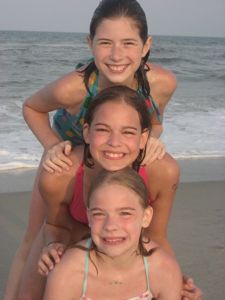