December 14th, 2014 marked the one-year anniversary of the tragic event that occurred in my hometown.  Residents of Newtown will never forget that day, and I have found myself thinking often throughout the entire year of the families who lost loved ones. There have been tributes to Sandy Hook School all over the world, but one of the most beautiful tributes I’ve ever seen was created by a local group of Girl Scout Cadettes. 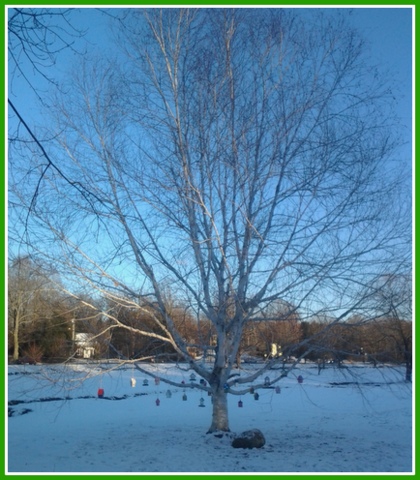 From December twelfth to January first, twenty-six beautiful wooden birdhouses hung from the branches of a white birch tree in the Newtown Historic Ram Pasture.  The Ram Pasture is a public parcel of open land running along our Main Street, and was once common grazing property for local farmers in the early 1700’s.  A picturesque grassy field with a pond, it is the site of the town’s Christmas tree lighting each year. 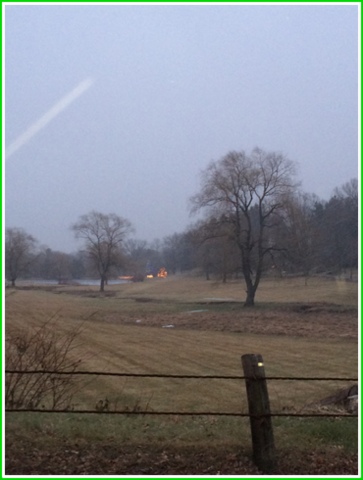 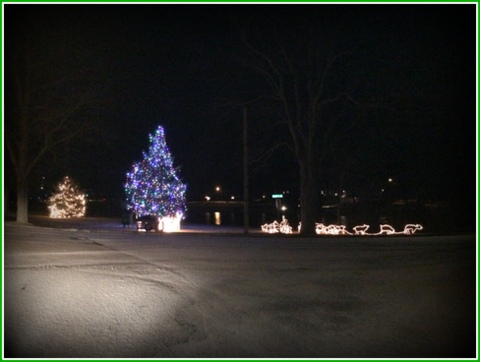 Clare Harrison and Gina Wolfman are co-leaders of a local Girl Scout troop of eighth-graders.  The idea for the birdhouses to represent each “Sandy Hook Angel” came last winter from a sweet young girl in the troop who enjoys painting birdhouses in the spring with her family.  The troop agreed it was a wonderful idea, and decided to move forward with the project.

Ready-to-paint birdhouses were purchased.  Clare’s younger daughter is in the sixth-grade troop my daughter is a member of, as well.  Since twenty-six birdhouses would be painted, the younger troop was asked to help.  One of our co-leaders is also a teacher at Sandy Hook Elementary, so this project took on an even more personal meaning to us all.

In May, each scout was sent home with an unfinished birdhouse to paint, and a name. The remaining birdhouses not assigned to a scout were painted by a few Sandy Hook Elementary teachers, as well.

My daughter and I fretted a little bit when we saw that Jack Pinto was the name she was given.  We knew Jack loved sports. Our family really knows nothing about sports or major sports teams, and we really wanted to ensure the birdhouse we painted truly represented sweet little Jack.  We decided to keep it simple, painting it in the colors of his favorite football team. When we told the local hardware store what we were doing, they made sure to show us the right outdoor paint and one of the salespeople, a football fan, confirmed the colors were the correct team colors. Audrey painted the birdhouse using several coats, and when it was dry, she wrote a little dedication to Jack Pinto on the bottom in permanent ink.

When they were finished, the birdhouses were then returned to Clare, who gave each one several coats of varnish.  One of the girls’ fathers donated laser-cut nameplates. The finished birdhouses are beautiful, each unique and special.

The birdhouses, ready for hanging.

It was decided that the birdhouses would be saved for the anniversary. Special permission was granted to hang them in the tree in the historic pasture.  One afternoon after school, the troops gathered and each scout hung her birdhouse from the low branches of the great white birch.  One of the neighbors living across the street was very moved, coming outside to thank the girls and bringing them a plate of just-baked cookies.  When all twenty-six houses were hung, the result was simply breathtaking, especially against the backdrop of a white blanket of snow. 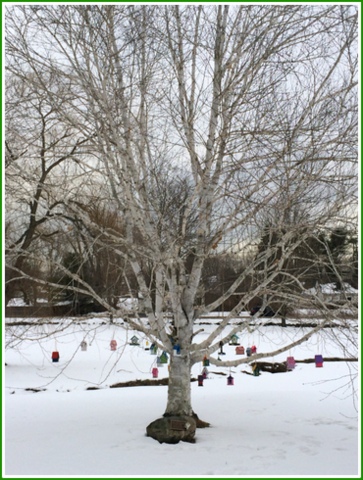 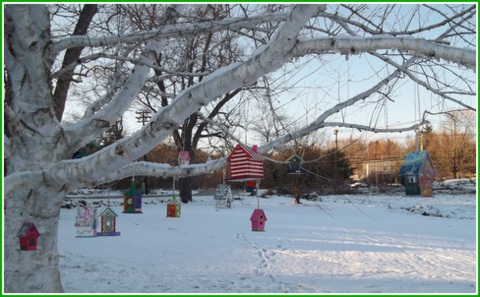 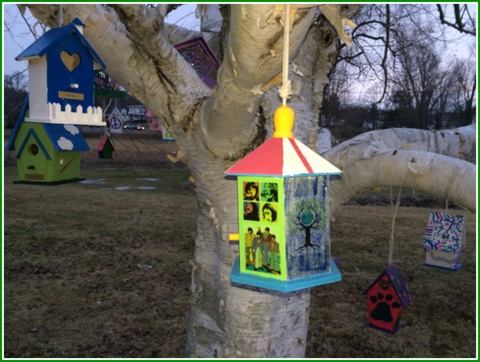 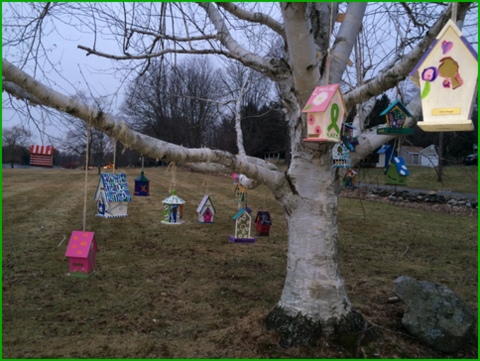 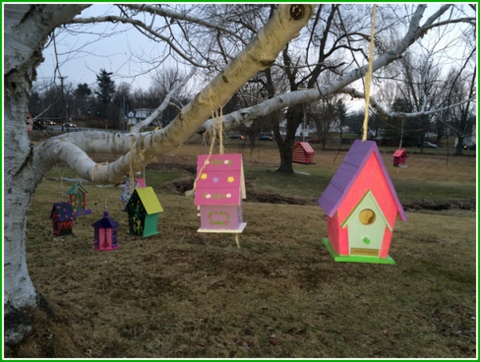 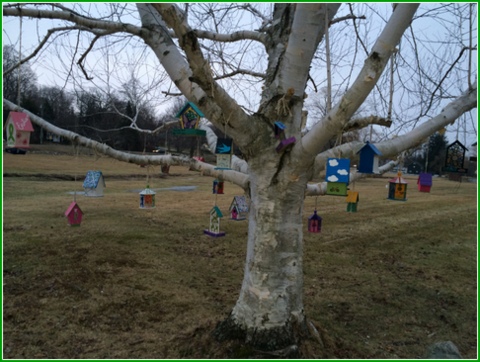 Photos of the tree and the birdhouses were seen on Facebook, as well as major news websites. For those three weeks, the birdhouses hung for all to enjoy.  The plan is to tuck them away each year after the New Year, make any re-touches needed, and hang them again in town on the eve of the anniversary.  Clare and Gina worked very hard to see the project come to fruition.  I am so proud of all of our girls and moved by the responses I’ve seen to them.  I love the touching idea of a birdhouse hung in memory of a loved one…a beautiful tribute.

Wishing you all a wonderful, peaceful start to the New Year! Please leave me a comment below so I know you stopped by!