Every generation has “fads”.  I still can’t look at a Rubik’s cube without an instant migraine.  “Beanie Babies” induce feelings of extreme guilt.  This year, kids everywhere are trading bracelets created from little rubber bands, similar to rubber bangles I traded with friends when I was a sixth grader, that matched all of my neon eighties outfits {shudder}.   Fads can be fun, especially for kids. Right now, my home is also abuzz with another current craze… it’s “Fox Frenzy”! 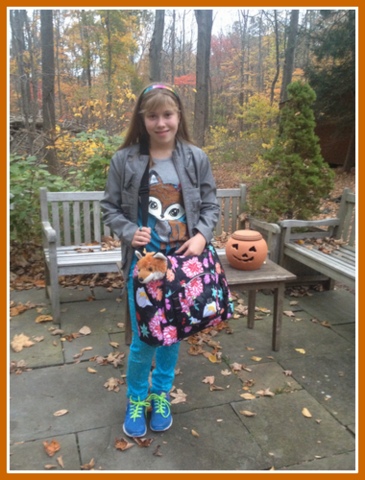 Heading to a slumber party in fox shirt, with fox stuffed friend

There’s always some fads that have us parental beings scratching our heads, wondering, “Why?”  Last year, kids were “mustache crazy”.  Mustaches adorned everything from stuffed animals to earrings.  My daughter’s school even had a spirit day where everyone wore drawn-on mustaches, including the principal.  Honestly, I didn’t get it.  I imagine representatives from big corporations sitting around a boardroom table saying, “Okay, what random item can we put on everything this year to torment teachers and melt parents’ credit cards?”

This year, it’s foxes.  Red foxes are everywhere!  Now, my daughter was ahead of this craze.  She declared the fox her “all-time favorite animal” years ago.  She owns enough stuffed animals to sink a large ship! Her room’s a zoo of stuffed friends…raccoons, opossums, snakes, a llama…but her favorite is her fox.  Her stuffed fox traveled  everywhere, even overseas.  Any parent who’s ever flown with a kid knows that little voice inside screaming, “I’d rather lose luggage than the stuffed toy!” 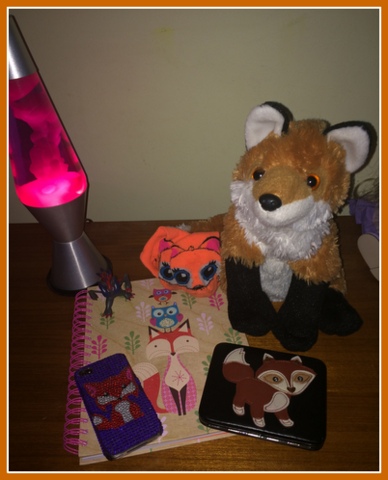 The fox fad is gracing everything, as shown here, next to another trendy item that has resurfaced after many years…the lava lamp! 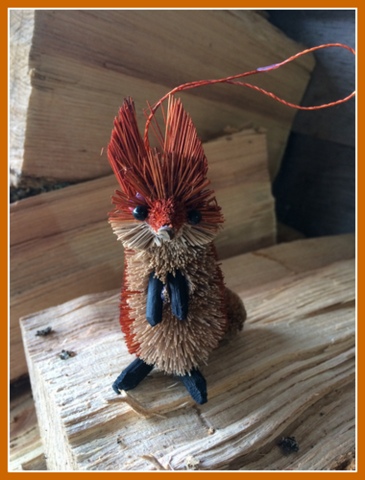 It’s tradition…we pick  one new ornament each year for our Christmas tree.  I just found this one last weekend.

I know my daughter truly loves her pet cat, when she gracefully accepted dear kitty “adopting” the stuffed fox as hers.  Mittens carries the raggedy toy in her mouth, and “kneads bread” on it daily.  It’s frequently sopping wet with stinky cat saliva. Every night, Mittens is cuddled up with that fox.  (Mittens doesn’t know she’s a cat, but that’s another story). We finally had to “upgrade” Audrey to a larger stuffed fox. 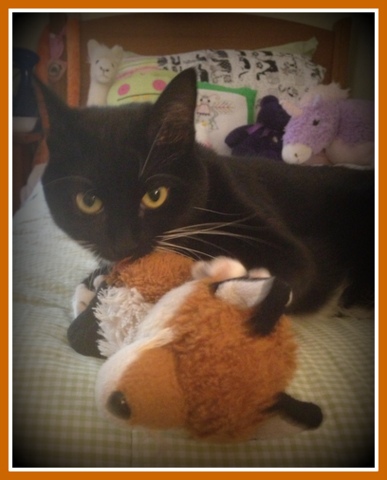 The tween fox craze started a few seasons ago, but  gained momentum recently,  adorning everything everywhere. Foxes have even turned up in pop music.  If you haven’t heard  “What Does A Fox Say?” by the Norwegian duo “Ylvis”,  Google the video.  You must see and hear it for yourself. The first time I saw them on television, I thought it was a joke.  With record-breaking YouTube hits and iTune sales, they aren’t laughing.  My eleven-year-old plays the song every waking moment, and I admit, it’s catchy.  (I’d rather her sing  the innocent lyrics of that than most  songs on the radio these days.  There’s always going to be artists pushing boundaries, but I think many lyrics today have gone too far).

So it was one morning the Ylvis “What Does A Fox Say” song was played over and over (and over…) before the bus arrived.  Inevitably, the song stuck in my head.  Later, my dog was outside  on the deck and began barking wildly. Opening the door, movement caught my eye. Too big to be a squirrel, I saw a bushy tail attached to something rolling around in fallen leaves beneath my bird feeder. It was hard to see at first, as it blended in with the autumn-colored leaves.  I  wondered if I had “fox overload”, that my eyes were playing tricks on me… but there on the ground was a big, fluffy, red fox!

It looked like a playful puppy in the leaves, all red fur and large black ears. I just had to snap a  photo for my daughter!  As I crept down the stairs, the fox took off running behind the shed.  I tried snapping photos, charging to the front of the shed.  Just as the fox was about to cross the rock fence to the woods, it stopped and looked right at me, then turned around.  I did a quick mental count of how many leaps it would take to get safely back to the house, wondering just how I’d explain to my husband that I contracted rabies trying to get a good photo. The fox then ran back behind the shed and climbed up onto a felled tree near the bird feeder. 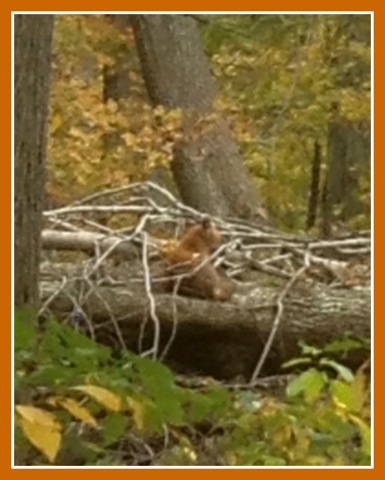 What happened next was fascinating.  The fox knew  I was watching, yet didn’t act as if it felt threatened. (I was a very safe distance)!  It didn’t seem sick, but plump and happy.  He scratched his neck, gave himself a bath, then turned three times like a dog before curling up with his back to me,  tail wrapped around  body.  He sat sniffing the wind and watching leaves fall, his stunning red fur shining in the sun.  Every once in a while he’d glance backward to see if I was still there. 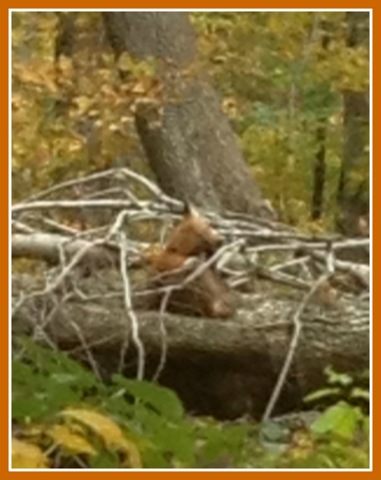 With my dog barking wildly at the window, I wondered if it was a bad sign the fox wasn’t afraid. Speaking with animal control, it was probably healthy, used to seeing humans, and likely “snacking” on chipmunks gathered below the bird feeder (how lovely…a fox buffet). My fox put on quite a show, sunbathing and froliking on the tree for 45 minutes before disappearing into the woods.  I feel lucky to have witnessed it.

Foxes are interesting, beautiful animals.  Quiet and elusive, they’re rarely seen by humans during the day, though found in many countries all over the world. They tend to live near farms and wooded suburbs and usually mate for life. They are dog-like in how they care for their young, but cat-like in their prowess, stalking and pouncing on food as opposed to hunting in packs like wolves. They are capable of climbing trees. Foxes just may be worthy of trendy adoration. (Of course, check back with me this spring when I finally get my chickens!)

So, to answer the question that’s been on everyone’s minds lately, “WHAT DOES A FOX SAY?!?”  Well…not much.  At least the one hanging out at my house wasn’t talking!