Recently, our relatives visited from Denmark. The first week was spent at our house; the second week, we all recharged with a trip to Florida!  It was not easy to sync so many schedules – six adults and three kids from two countries!  What a fantastic week!  Disney World is thrilling, but there was one particular day that has us still beaming.  How often do you get to cross something off your “bucket list”? We couldn’t imagine traveling from Connecticut to Florida, and not visiting someone very special! 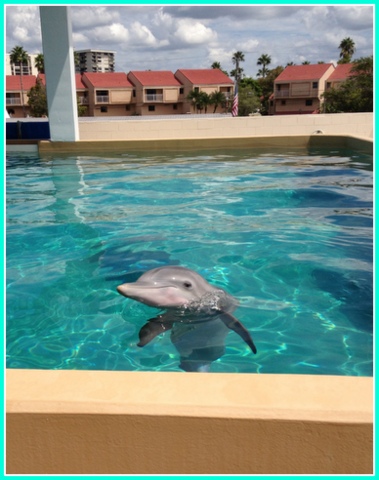 Ninety minutes from Orlando, in Clearwater Beach, lies Clearwater Marine Aquarium, a marine animal hospital that rescues, rehabilitates and releases sick and injured animals.  For years, they’ve healed and released numerous dolphins, sea turtles, and river otters.  If an animal can’t survive in the wild, they may take permanent residence at CMA.  One such resident is Winter. Winter, an Atlantic Bottlenose Dolphin, was only three months old in 2005 when she was found horribly entangled in the ropes of a crab trap.  Her tail severely injured, it looked like she might not survive.  Sadly, she ended up losing her tail, but miraculously, she recovered. A prosthetic tail was designed with a special sleeve, using “Winter’s Gel”, which has inspired more comfortable human prosthetics, too. 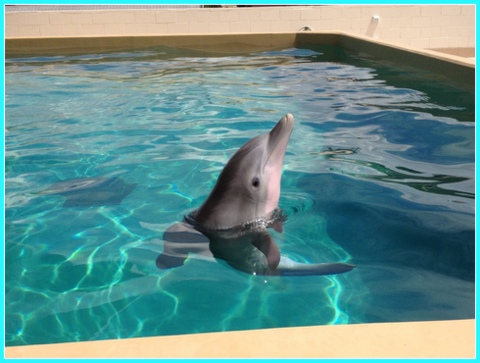 We first heard of Winter the dolphin when we saw the movie Dolphin Tale, based on Winter’s ordeal, during its fall 2011 release. It’s one of those rare, perfect family films, starring amazing talents like Ashley Judd, Kris Kristofferson, Morgan Freeman, and Harry Connick, Jr. (sigh…).  It was a cold, wet, school holiday, so I took my daughter and a friend to the movies. Glued to the screen from the film’s start, Winter captured our hearts! Since then, we’ve watched that film countless times, and frequently visit Clearwater Marine Aquarium’s webcam (http://www.seewinter.com/ ) to view Winter and her dolphin pals, Hope and Panama.  We’ve watched her feed, play, and have her prosthetic tail taken on and off.  We’ve dreamed of touring CMA and “meeting” Winter.

The day we visited Clearwater Beach was beautiful.  To get there, we crossed one of the longest bridges I’ve ever seen, with breathtaking scenery! 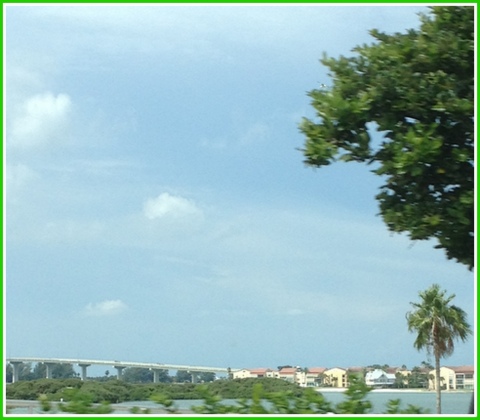 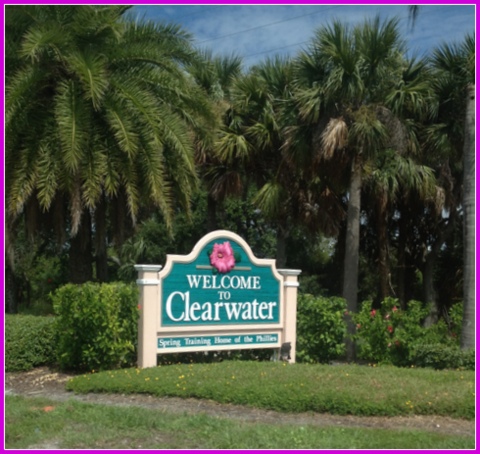 At the aquarium, all the staff were so friendly and informative.  Their love for animals and pride in what they do is evident. I think they are heroes. Of course, the first thing we wanted to see was Winter! 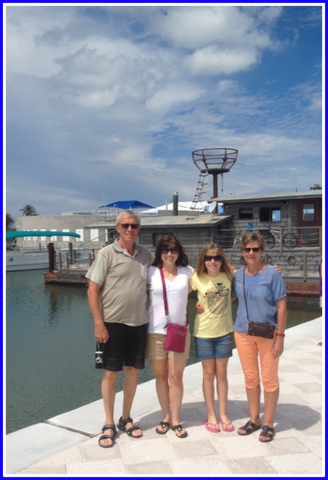 Posing with my in-laws in front of the entrance to the Aquarium, “Hazel’s Houseboat” from the movie Dolphin Tale

A sequel to the film’s being made, so Winter, Hope, and Panama were outside in a covered area.  There she was!  I was surprised  how tiny Winter looks off-screen.  There are stadium seats where visitors can sit to watch the dolphins, or one can stand a safe distance near the tank edge. At first, she kept swimming to the other side. At one point, only my daughter, myself and a staff member were by Winter’s side of the tank.  We were so excited, we couldn’t help gushing over her.  The CMA staff member told us Winter was also curious of us.  She came closer, making dolphin sounds. What a ham! While we were talking to the staff member,  Winter started “showing off” – she wanted our attention back! 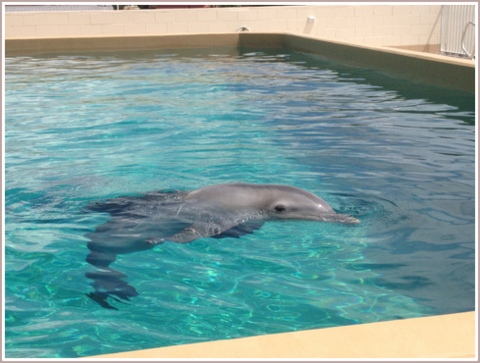 Sweet little Winter checks us out..

The knowledgeable young man on duty taught us all about Winter and dolphins. He was so passionate, saying, “They’re our babies”.  Young dolphins are pinkish in color, becoming darker grey with age.  Mother dolphins teach their young how to survive and find fish, and the oldest dolphin in captivity just turned sixty years of age!  Hope was just a baby when she was rescued, trying to nurse her dead mother. Panama was older when she came to live at CMA. Sick, she’d become a “beggar” dolphin – relying on boats for food.

The reason Winter’s not always wearing her tail is because the prosthetic is used for exercise. You wouldn’t wear your workout gear all the time, either! I love how CMA considers its resident animals “ambassadors” for their species, promoting environmental conservation. 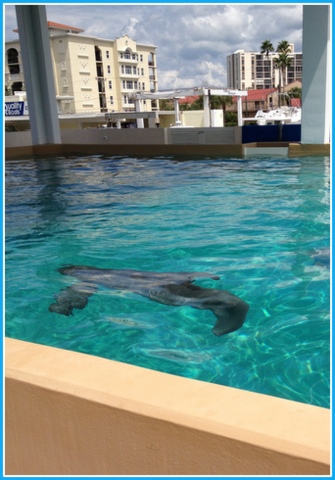 We watched the dolphins a long time. Before leaving, I went to snap Audrey’s photo in front of Winter’s tank.  Right then, Winter poked her head out of the water, as if “posing” for the camera.  It was a magical moment, and of the 650 photos we took on vacation,that’s my favorite. 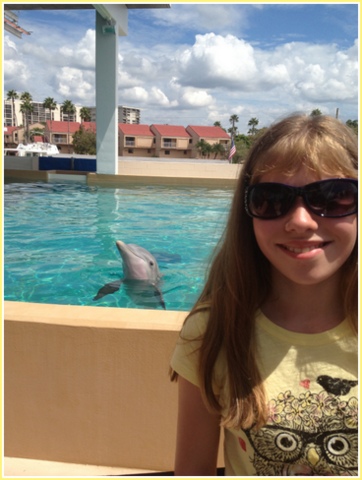 We visited the rest of the aquarium, it’s marine animals and tanks of fish and sea turtles.  We learned all about stingrays, and Audrey got to hand feed some! 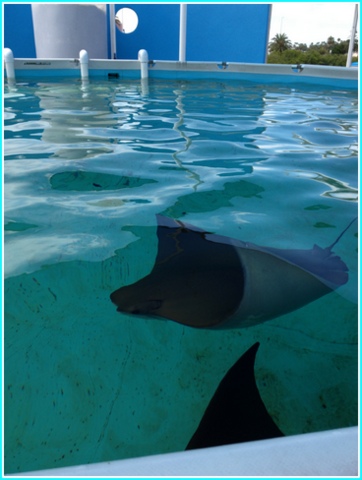 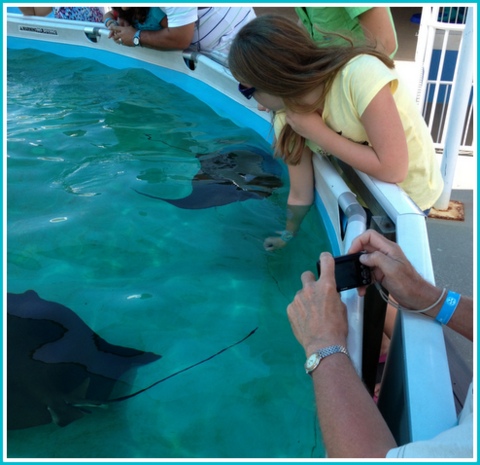 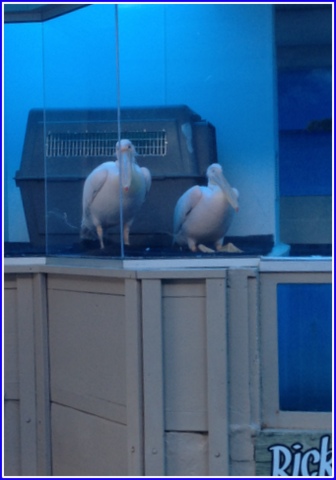 The character of “Rufus” was actually played by two beautiful pelicans. 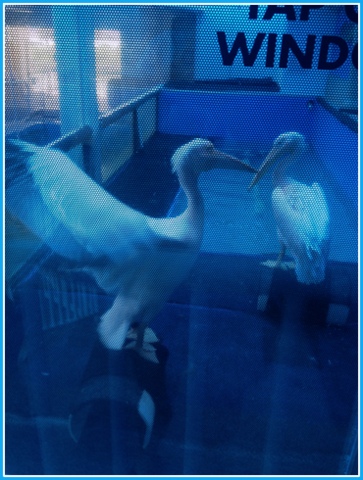 The town of Clearwater Beach is lovely.  We ate lunch at a beach side restaurant, and took a heavenly swim in the ocean.  The sand is white and soft, the water clear and warm. 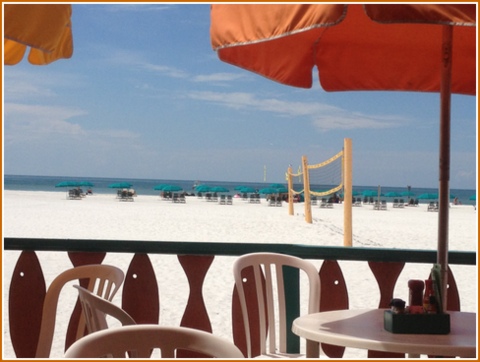 The view from our table at lunch.  We went for a heavenly swim, but left after a rather large, very fast stingray swam around us. A little too close to the wildlife…

Afterwards, we toured “Winter’s Dolphin Tale Adventure” downtown.  We saw movie props, learned more about Winter, and experienced what it’s like to be in a hurricane. (My daughter had us experience the hurricane exhibit three times)! 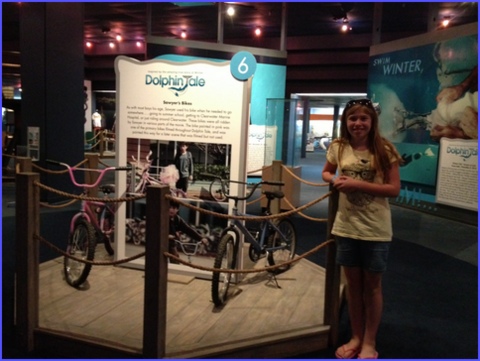 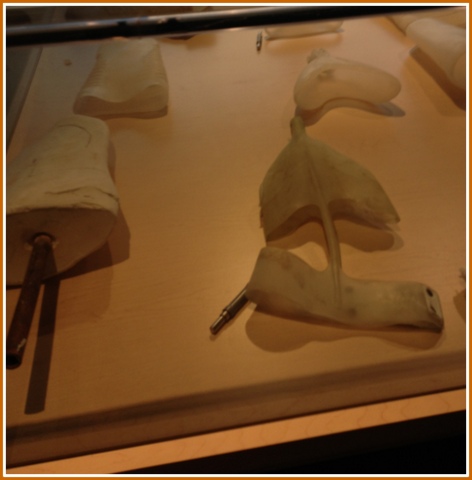 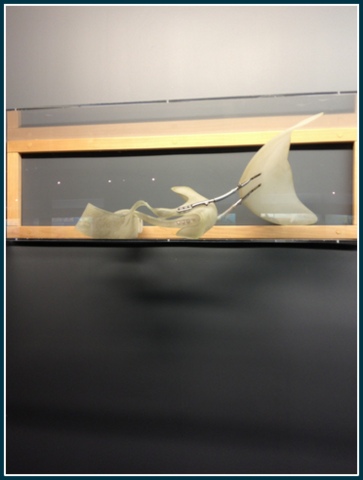 Audrey was a little apprehensive about a new school year after what transpired in our hometown last December.  After Florida, she couldn’t wait to go to school and tell her teachers and friends about visiting Winter.  She knows other kids who’ve been to Disney, but not to CMA.   She’s always said she wants to be a veterinarian someday. Now she’s inspired by marine biology, as well, her nose buried in a book on dolphins.

Everyday in Florida was memorable, but the day we spent at Clearwater Marine Aquarium was extra special – fun, inspiring, and educational. Winter’s an enchanting and inspirational soul – a real-life example of survival and hope.