Posted on May 25, 2012 by Suburban Farmgirl Nicole Christensen

We’re rounding the corner on the end of Spring, and the start to my favorite season is upon us.   We’ve been  busy getting the yard and garden ready. Come on over, and see what’s happening in the ‘burbs.  I’ve got some great tips to share! 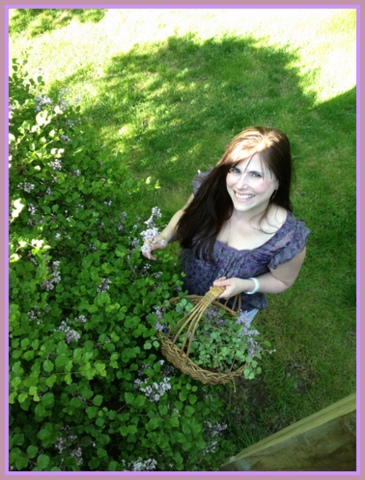 Many birds have returned, like hummingbirds entertaining us at the kitchen window and colorful goldfinches at the feeder.   A few weeks ago, we were treated to a rare and exciting sight.  Coming home one evening, a large bird swooped in front of the car and perched on the wire above the street.  At first we thought it was a hawk, but soon realized it was a Snowy Owl! He sat above us for several moments, then flew off into the woods.  We were very excited to get a glimpse of “Harry Potter’s pet”! 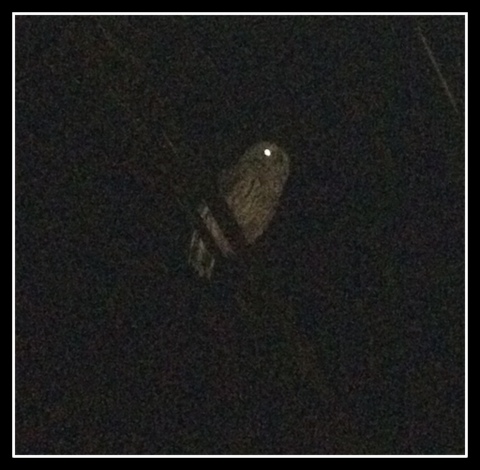 Remember the birdhouse I repainted a few posts back?  We usually get a house finch nesting in it, but this year have been treated to a family of bluebirds!  They’re so vibrant!   A house finch tried to sneak into the birdhouse, but was bounced right back out!  I’m sure we’ll hear baby bird voices soon. 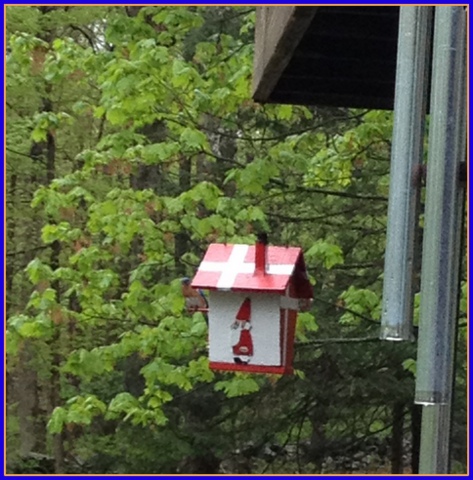 Mama and Papa bluebird have moved into the birdhouse. 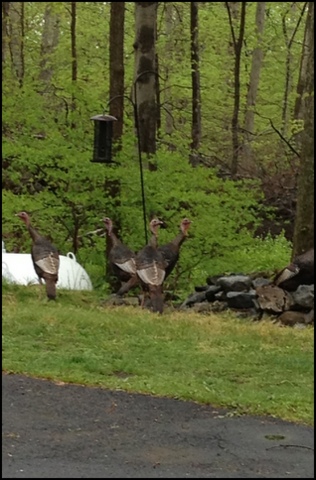 This gang of turkeys has been frequently having breakfast at the feeder. 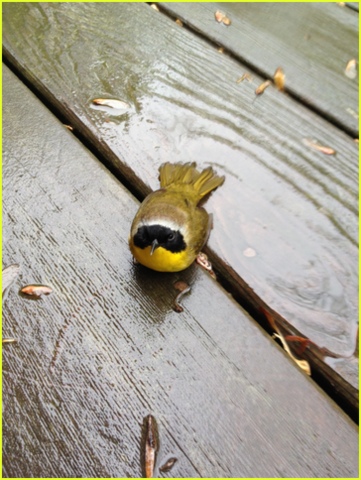 No matter what we do, a few fast-flying feathered friends find their way into the glass each season. This little warbler hit, sat for a moment, then flew on its way. 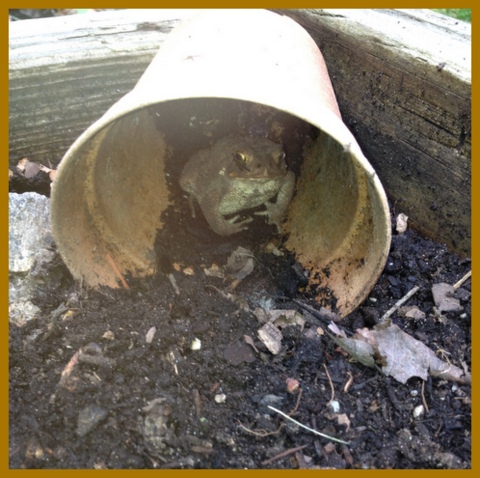 The garden is starting to treat us with some beautiful blooms. The air’s been fragrant with the intoxicating scent of my Miniature English lilacs. This lilac blooms later than the traditional-sized flowering lilac, but its blooms are just as fragrant, inviting beneficial bees to our yard. I love cutting bunches of lilac blooms, placing them around the house in simple Ball Mason jars. 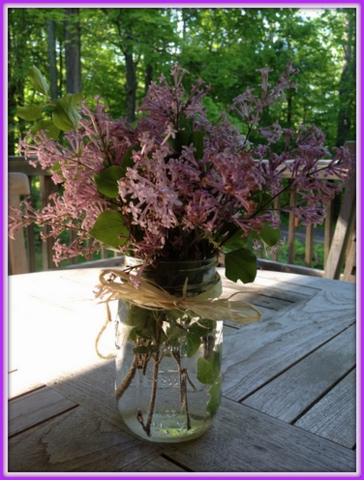 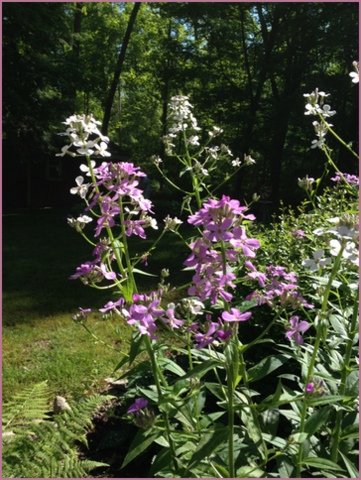 A view of the cutting garden. 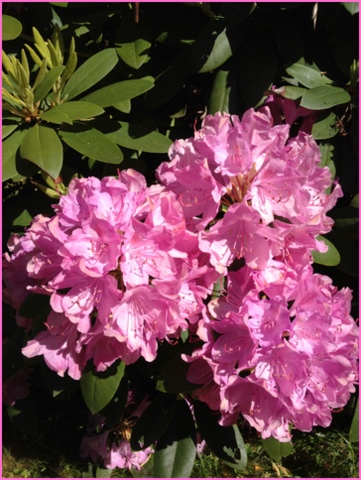 Rhododendrons are in full bloom and remind me of pom-poms.

It’s also time for one of my favorite flowers to bloom, the peony.  (Did you see the article on peonies in the current issue of MaryJanesFarm?  Peony paradise!  I don’t have nearly that many, but I love the ones I do have).  A friend, who’s a new gardener, recently asked me what to spray her peonies with in order to get rid of the ants.  My answer? Nothing!  Ants and peonies go together like peanut butter and jelly.  While there is debate on whether or not the ants are beneficial, they do not harm the plant or buds. Once the flowers bloom, the ants disappear.  I’ve also been babying my rosebushes, feeding them with used coffee grounds at the base of each plant, a tip I learned from my late grandmother, Carolyn, who was known for her roses. 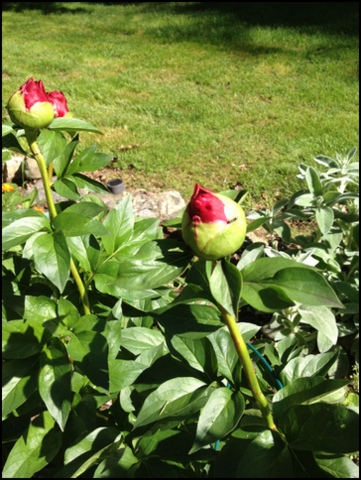 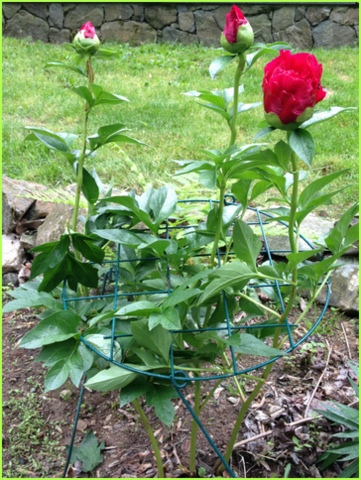 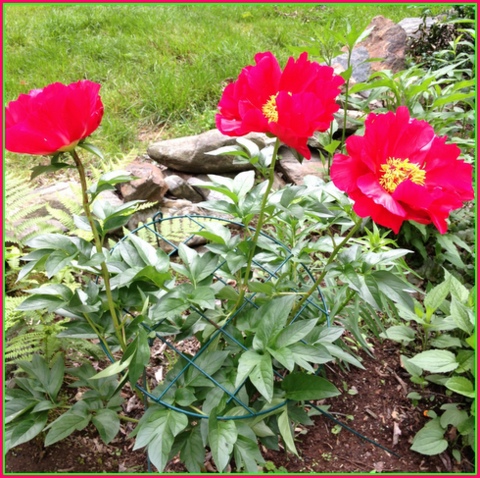 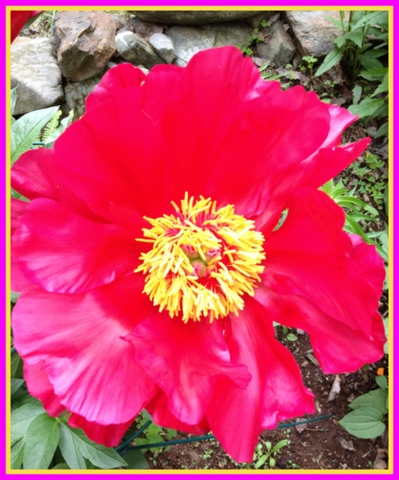 Peonies…over the course of a few days.

I battled the yard, and the yard won. For over three weeks I’ve suffered from an acute case of case of Poison Ivy.  On a Friday, putting in the vegetable garden, I pulled a weed wrapped around the fencing. It crossed my mind it might be poison ivy, but I was wearin’ gloves so I thought I was safe. By Saturday night, I was breaking out.  By Sunday, big, red patches of painful scarlet covered both my arms and both my legs. By Monday, when I went to the doctor, I was running a fever and the rash was infected. I ended up on a strong antibiotic and prednisone (double yuck)! Everywhere I went,  people offered advice.  I was surprised by how many people are allergic, and also by how many people do not know what poison ivy, oak or sumac look like. Poison Ivy can be found anywhere, and can grow on the ground or as a trailing vine. Its color can range from dark army green to bright green. 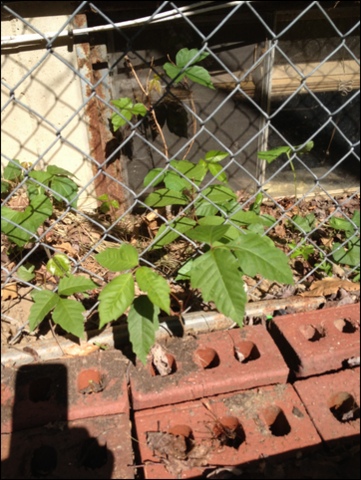 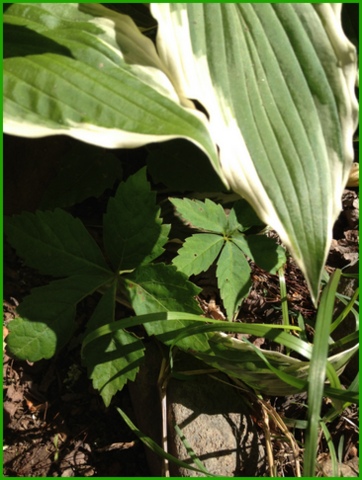 Look-alike weed Virginia Creeper, peeking  from beneath a hosta in my hosta bed, although Poison Ivy pops up there.

The invisible oils of a poison ivy plant are what cause the rash.  The more exposed a person is over a lifetime, the higher the chance that person will develop a reaction from exposure.  Humans are the only animal that have reactions to poison ivy, which explains why a dog can transfer the oil from its fur to its owner. A dead vine of poison ivy can affect a person over a year after a plant is dead.  Its invisible oil is what causes the rash, and the residue can remain on surfaces including clothes and garden tools.  Regular soap and hot water will not prevent the rash,and can also spread the oil and the rash. The best action is to prevent the rash by removing the oil before soaked into the skin.  If exposed, jumping in a swimming pool of chlorinated water will prevent a reaction.  (I was also told I could wipe my skin with bleach – no thank you).  My friends and fellow sisterhood chapter members Dina and Kristen both recommended Tecnu,  a wash found at the drugstore that removes the oil from the skin.  Leave it to Farmgirls to have the answer!  I also found  it brought some relief to the rash itself. Fels-Naptha laundry soap on the rash is a remedy from way back, but I found it didn’t help me.  A paste made of vinegar and baking soda, although messy, brought cooling relief.  After the rash has started to heal and dry, prevent scars with coconut oil. 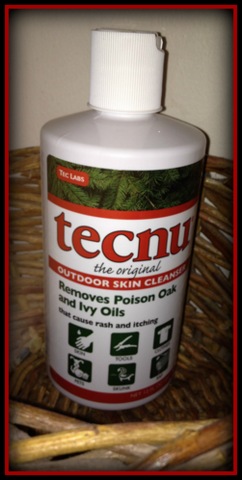 How do you get rid of the weed itself? Posting on the Farmgirl Forum for advice, goats were recommended.  Great idea, but we aren’t zoned for goats and the family dog would be horrified.  I don’t relish the idea of using pesticides, so I researched to find something more natural to rid our property of this enemy. Most “recipes” call for making gallons of poison ivy killer at a time.  I broke it down to try a smaller batch and put it in a spray bottle: 8 cups vinegar, 4 drops dishsoap, and ½ cup salt.  I can report that it did kill the poison ivy, as well as weeds growing in between my walkway. Be careful, it will kill any plant it touches, so only spray what you intend to kill. Laurie, a Farmgirl sister in New York state, emailed me a similar recipe that calls for boiling the vinegar and salt together to dissolve the salt. I’ll do that next time, to prevent the spray from clogging.

Looking for a way to keep my garden tools handy, I re-purposed a vintage drink carrier.  It’s sturdy, easy to carry, the slotted bottom allows dirt to fall through, and I can easily spot any missed tools I may have left in the garden. 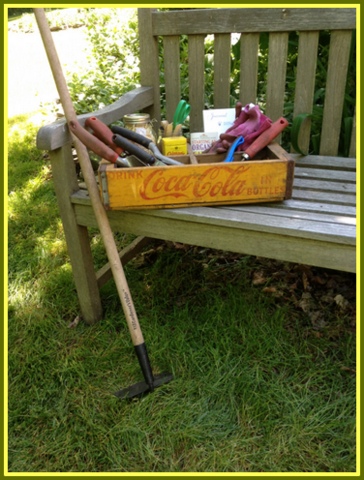 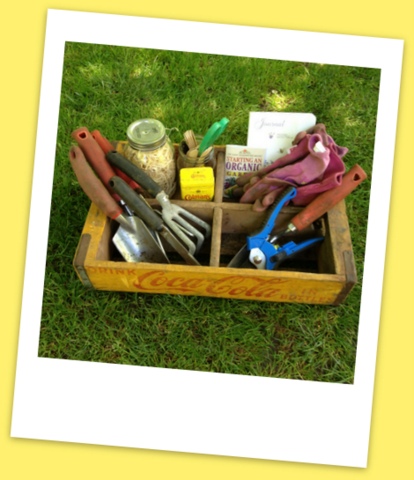 In my box: garden tools, a jar of raffia, wooden sticks, scissors, my garden journal, a pen, gloves.

I love finding bargains, don’t you?  I recently found this wooden potter’s bench, marked down from $49 to $12.00! I figured at that price, if it only lasts a season, I’d use it for firewood! After my hubby assembled it, we were pleasantly surprised it’s made of cedar.  I’ll stain it with a weatherproofing stain.  We re-purposed some old walkway steps and made a little patio for it next to the veggie garden. 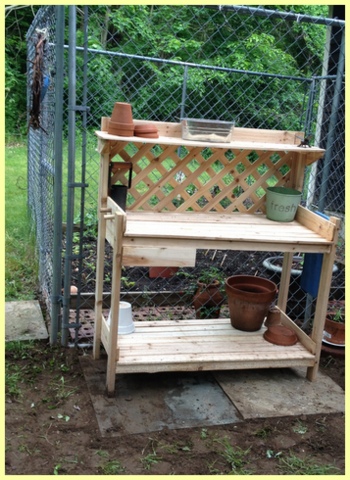 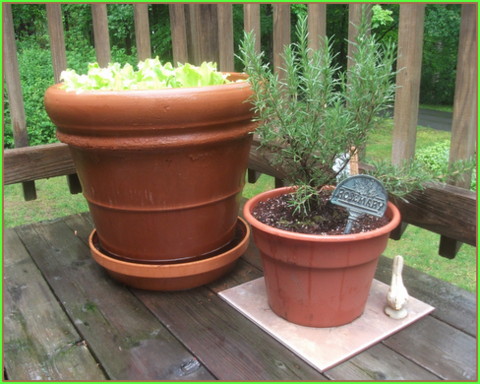 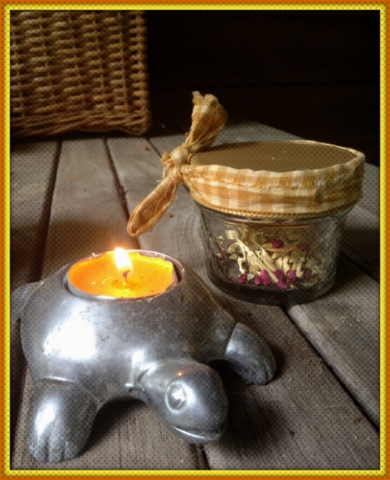 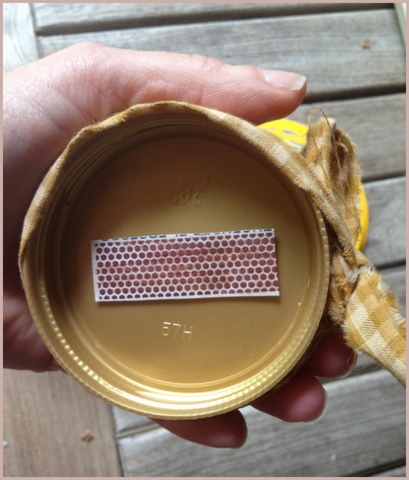 We always need matches to light our patio candles… here’s a cute match safe I created from a jelly jar, which keeps my matches dry and handy.

Next on my to-do list is to “upgrade” my composter, like my father’s. He used four wooden pallets, attached with eight hook and eyes. 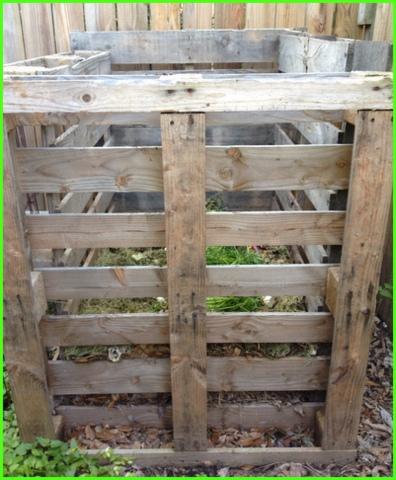 That’s what’s been happening here in the New England ‘burbs.  What’s happening where you are? Drop me a line and let me know!