Winter has finally come and stuck around. The exciting tease of flurries and chill that begins to poke around in October has given way to snow that accumulates, temperatures that remain below freezing, and the shortening of days. As I write this, we are two days shy of the winter solstice and our number of daylight hours hovers around five and a half. The sun rises after ten a.m. and sets well before four p.m. It is winter. It is time to eat, love, create and enjoy. 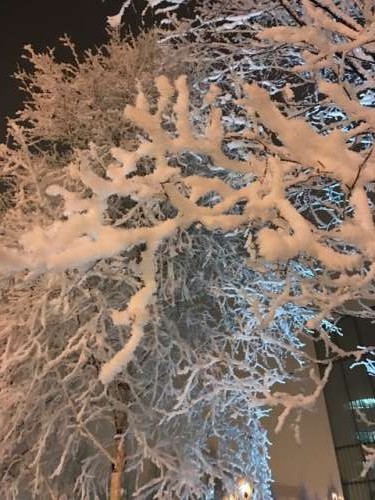 We have been treated with beautiful hoar frost several times this December.

As a Farmgirl, I can’t help but have some focus on food procurement. With the passing of the harvest season and its subsequent canning/storing season, what is left? Oh yes–the protein, the meat! As a current urbanite, raising our own meat animals was not an option. This year we purchased a pig that our friend had raised and split it with two other families. This is one of the spring pigs from the three day old litter I posted about back in April or May. As far as processing the meat, we didn’t have to do any of the work aside from picking the final, frozen product up from the butcher. The pork is some of the best I’ve had! I absolutely LOVE good pork fat on a thick bone-in pork chop or steak. When cooked correctly, it has the texture of a scallop and a wonderful flavor. And the sausage! Oh the sausage. I have a sneaking suspicion the sausage will only last us through the winter. 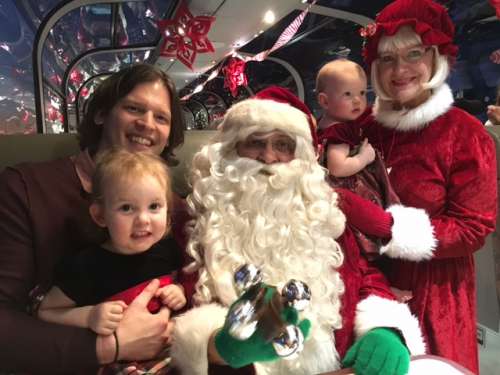 We rode the Santa Train on the Alaska Railroad and met the old man in red.

While this pork is amazing, and it seems very Farmgirl-responsible to purchase lovingly raised local meat, I still linger a bit on the disconnect between this food and our consumption. While actually killing a pig is pretty much out of the question for me (I could barely slaughter a chicken if you remember!), raising and butchering (after someone else kills it) our own protein is on my list of “future life endeavors.” One night, in a kind of weird juxtaposition, I had a revelation while nursing Opal before bed–I could become a butcher! As I watched this sweet baby nurse, I imagined being a local butcher who works in the busy fall or for a few close customers throughout the year with their large animals. This is totally unrealistic, but a Farmgirl can dream, can’t she? 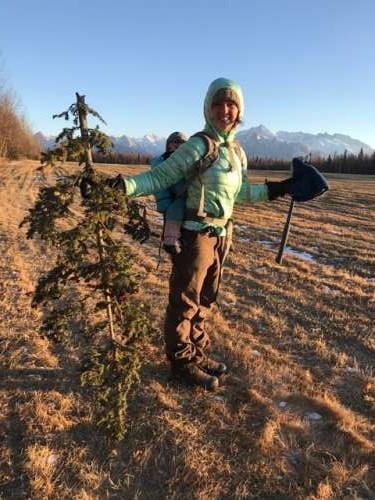 What can I say? I like bladed instruments. This is our impressive tree. It is the top of a spruce tree that had recently fallen over the hiking trail. It is covered in spruce cones! Our best tree yet.

Not five years ago I gagged while breaking down whole chickens from the grocery store. Since then, I’ve grown to enjoy the process of properly maneuvering a knife around the carcass of animals. It lends to a great appreciation for the life and energy that went into the food that so many take for granted. It encourages me to use as much of the animal as I can so that its life was not given in vain. Before a few weeks ago, I had never processed any animal bigger than a turkey…so these dreams of becoming a veritable butcher were pretty unfounded! I just imagined that if I got satisfaction out of cleaning and breaking down fish and poultry, then it must be even better with larger livestock.

Luckily, it is hunting season. While neither I nor Evan are hunters, we know a few. After my butcher revelation, I offered my newbie services to my friends who had gotten a bison tag. They got one and ended up grateful for help after the cooler it was aging in went out, and they had to process it earlier in the week than expected. 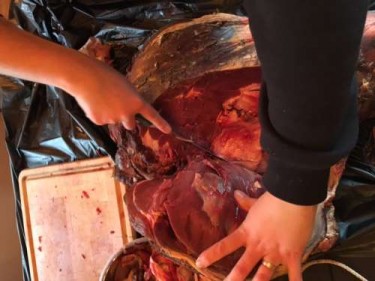 The meat from this animal is beautiful.

This animal was HUGE! We didn’t weigh the meat at the end, but we guessed it was more than 300 pounds of food after it was all packed up. I helped cut up two quarters–one hind leg and one front. The muscles, ligaments, and connective tissue that we worked with and around were beautiful and powerful. There were still some spruce needles and pieces of moss from the woods it once roamed stuck to some parts. None of us are that familiar with official cuts, so I’m sure anyone with more knowledge would have thought we were positively “butchering” the animal, however we barely wasted anything (almost all the “waste” was pressure canned for dog food), and ended up with some excellent bison burger with the large amount of trim we created. I have eaten a steak from that bison and a “buffaloaf” made with the burger–both were outstanding. There is so much flavor in wild animals. One can almost taste the grasses and shrubs of Delta, AK that nourished the beast. 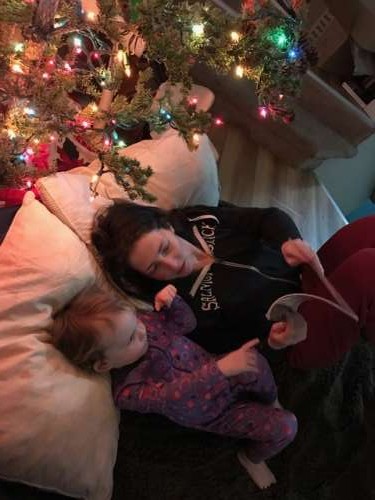 We’ve been reading stories every evening under the light of the Christmas tree.

With this yummy meat, we are going to finish off this year with a meal largely provided by ourselves (or at least people that we are very close with). The menu isn’t set, but I’m anticipating a slow roasted pork shoulder or ham for our Christmas roast and some bison meatballs with spaghetti for the New Year (long noodles are traditionally eaten in Asian cuisine for luck and longevity in the New Year). I find it very fitting to celebrate the returning of sunlight and our entrance into a new cycle with a small sample of what the previous cycle helped provide. 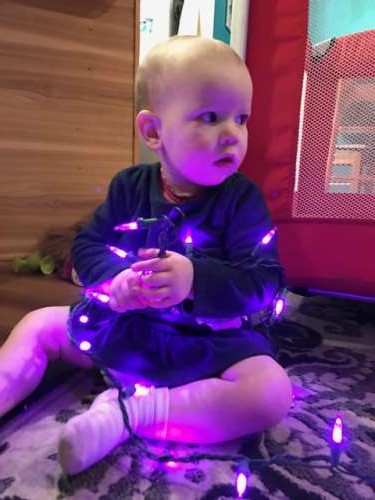 Opal helping with my favorite string of lights–the purple LEDs!

Aside from yummy steaks and hams, December has brought a lot of fun and germs into our lives. We cut down and decorated a Christmas Tree. We have had coughs and runny noses. We rode the Santa Train and met Santa and lots of elves. We’ve played in the snow and created Christmas decorations. It is such a joy to see Christmas through the eyes of an almost three year old. Ava is amazed by the lights and garlands and candy canes. She adores Santa and snow. She says she wants “a real horse and a real donkey” for Christmas…We’ve told her that her wish might come true in a few years, but probably not this year. Both she and Opal are much needed lights during this period of long nights!

Ava and I made ornaments for friends and family. She really likes glitter…Who can blame her?

Among all of the love and celebration a stomach bug came through and took us all out…one day at a time. We are finally recovered after a full week, but after we were all feeling better (and hungrier!), we didn’t have much convenience food in the house (and I didn’t feel like cooking!). While I contemplated taking my greasy, tired, pajama’d self to the grocery store for some emergency dinner, a knock came at the door. It was a package from the one and only MaryJane! It contained some samples of her newest line of Organic On the Go microwavable meals. Hallelujah! At the time it felt like a gift from the heavens. I don’t often purchase quick meals like this because I’m leery of the ingredients and the waste–but these contain whole ingredients (and love!) and come in recyblable containers. After one minute in the microwave and ten minutes of sitting time (in which I had enough time to fry up some sausage and steam some veg), we had a meal fit for a family recovering from GI stuff. We tried the “Thai Fusion” and “Curry in a Hurry.” Both were excellent! MaryJane–Thank you for saving my sanity :). (following photos by Evan Pederson)

They are yummy, reasonably priced and a mindful choice. I’m going to be getting more of these for those times in life when I need a little break.

Are you finishing this year with a special meal or food? I love hearing about others’ “special” meals. Any secret recipes out there? Here is my favorite holiday punch from my Grandma’s recipe box:

Works best to mix in punch bowl because it foams up so much.
It also tastes good with spiced dark rum, if that’s how you roll.

I hope this December finds you all safe and warm wherever it finds you. I also hope you get a special surprise from a guardian angel in disguise!

Sending you peace, love and merriness from Alaska!