My darlin’ neighbors down the road have lived in their home for forty years. Now retired, Ken and Karen Mackenzie are known about town for the amazing maple syrup they bottle. Each year, we can’t wait to see smoke coming out of the top of the “Mackenzie Sugar House”. This year, they graciously invited me to be their apprentice in the process. Inspired again by MaryJane, I was thrilled at the chance to cross something off my “bucket” list, pardon the pun. 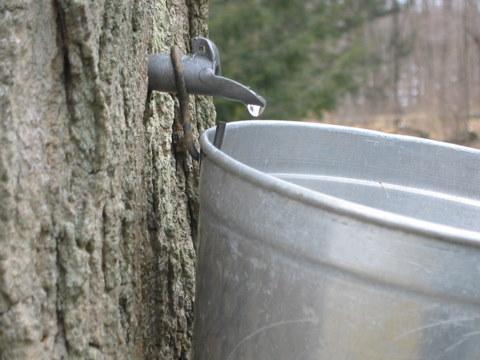 Making maple syrup is weather dependent, with below freezing nights of temperatures twenty to twenty-five degrees, and above freezing days over forty degrees, (to get the sap flowing) which is why maple syrup comes from New England or Canada. The season is short, from around February fifteenth to the twenty-seventh of March. End of season, as buds form on the trees, the chemistry of the sap changes, producing what’s known as “Buddy Sap”. This affects the taste, making it bitter.

Inspired by an article he read in the paper in 1978, Ken started his hobby using buckets for collection and boiling down the syrup on his grill. In 1981, he and his children built the “Sugar House”, which still stands today. (It’s charming as well as functional). Now his grandchildren come and carry on the tradition. In 1985, Ken designed his own evaporator – the contraption which boils down the sap. The trees he taps are sugar maples. He uses lateral tubing with fittings, installed last year, the more “modern way” of collecting sap, but still keeps a few buckets around because the grandchildren and scout troops are thrilled to see them on the trees! There are two tanks on his property; one collects sap and pumps it up to the holding tank, which then takes the sap and gravity-feeds it into the evaporator. He says most of what he knows about sugaring is through years of “trial and error”. The Mackenzie syrup tastes like perfection to us! 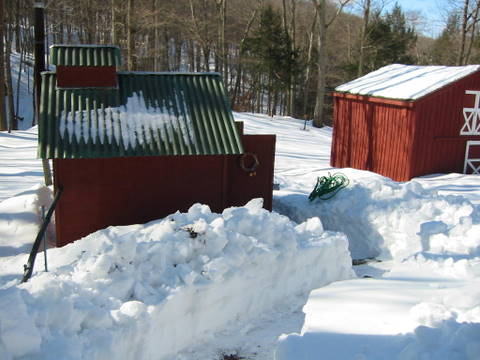 With record breaking snowfall and ice this year, the first thing I learned was how to walk in snowshoes! It felt awkward at first, but I soon got the hang of it, and we set about “tapping” trees. Ken brought his bucket of tools, which included a hammer, an electric drill, and what was once his father’s hand drill, in case the battery ran out on the powered one. I honestly did not realize just how much expense and hard work goes into “sugarin'”, and have a new appreciation of the sweet “liquid gold”. Did you know that it takes roughly forty-five gallons of sap to make one gallon of syrup? 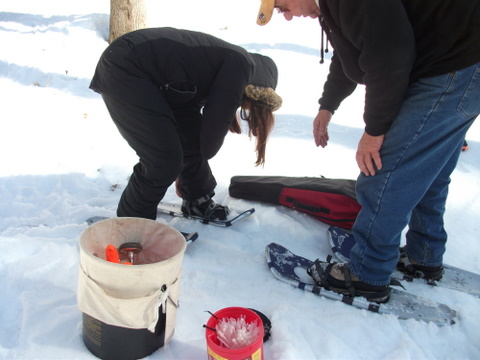 Here, Ken and Karen’s friend Bob instructs me on the proper way to put on snowshoes. 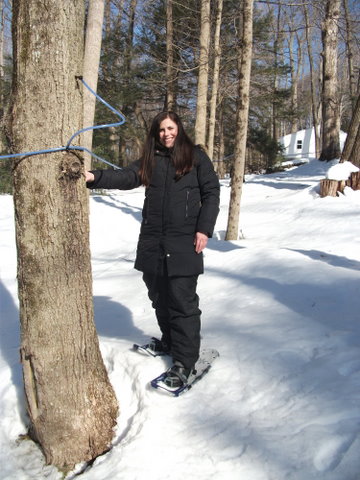 I’m standing next to one of the trees we tapped. Notice the tubing and the black spout coming from the tree.

Next, I learned how to look for previously drilled holes. You don’t want to tap into the same place twice, as it could harm the tree. When done correctly, tapping trees does no damage. We could see little “marks” on the trees, where the bark is still healing from the previous year. We needed to find a spot on each tree which would allow the lines to run from one tree to the next. Then we drilled a small hole at about a ten degree angle, the idea being that the sap should run down, not puddle in the hole. As soon as I pulled the drill bit out, clear sap would flow out and down the tree. Tasting it, I found it was slightly sweet, not as sweet as syrup. Syrup is the sap with the water evaporated out of it, and gets its color from the length of time it is boiled. 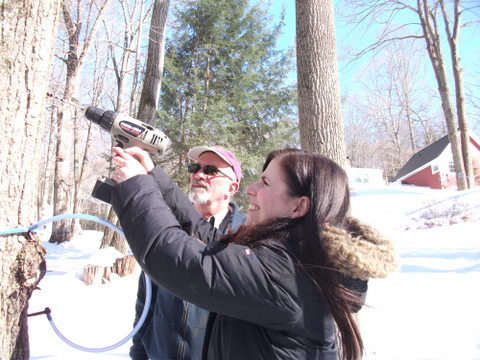 The next step was to hammer in the spout. A few taps was all it took, and we could tell the spout was in properly when we heard a “plunk” sound. We would then move to the next tree, tapping seventy-one trees in all! A large enough tree can have more than one tap. Ken does one tap for every twelve inches of tree. There must be a diameter of fifteen inches for two, twenty-four for three, and thirty-six for four. Just the preparation before tapping is a huge job! The tubing running from tree to tree looks like spider web, and must be clean and inspected before use. When the line stretches (from being in place a while), it can sag, causing the sap to pool and the possiblilty of mold. To remedy this, they use a splicing tool, cutting the line and pulling it taut again. 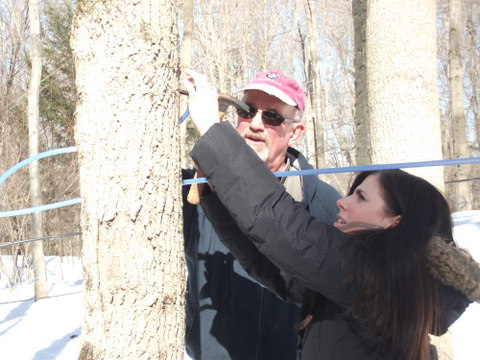 Here we are hammering in the spout, attached to the tube which the sap runs through to the holding tanks.

Once all the taps are in place, the waiting begins. After the sap is collected in the holding tank, it will then be time to boil it down. Join me again in a few weeks, when I visit my friends the Mackenzies, as they perform the time-consuming and important task of running the Evaporator at the Sugar House! 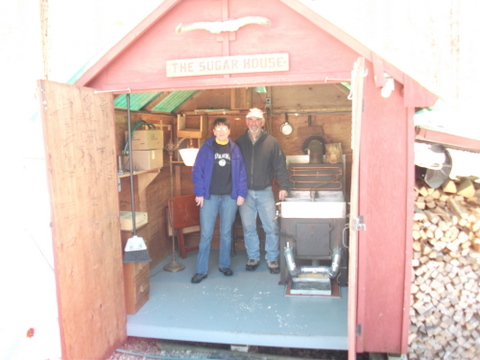 Ken and Karen Mackenzie inside the sugar house