Spice Up Your Life!

First of all, Happy Summer Solstice! What a wonderful thing to celebrate—the longest day of the year, the finalization of our hemisphere’s bow to the sun, a time to start counting down to the long, cozy nights of the winter to come. I can’t help but think that, cyclically, this is the top of our seasonal wheel and we’re celebrating a brief breath at the peak before we continue to spin madly on.

We had a kind of Summer Solstice party on Saturday. I’ve really enjoyed celebrating the solstices for the last several years. I generally don’t do anything especially special—maybe a hike or a long drive to chase the sun; it is just nice to be outside in the light until it fades away…however, in Alaska, this doesn’t happen! We were up until about 1 a.m. and it was still pretty light out. We were flying kites until 11 and the light of our bonfire went largely unnoticed until smoke drifted our way. The sun rises and sets almost directly due north these days. I don’t think I’ve seen true darkness for three weeks. One of my friends saw the sun starting to rise again at 2 a.m.

With these long (endless, really) days of summer, we’ve been eating steadily later and later into the evenings. We’ve eaten several 9:30 and 10:00 dinners over the last several weeks. While we exclaim that it is so late to be eating, our habituated appetites are all screwed up, so our bodies are ready for food that late! As a hard working Farmgirl, late dinners give me a lot of time to ponder meals before they happen, and as the days have gotten longer, I’ve developed a kind of “spice experiment”.

In high school, my go to spice was the “Italian Blend.” I know, exciting, right? Well, it is a great standby, and I still put it on my shopping list once in awhile. However, I generally make my own “Italian Blend” out of individual spices. As my palate unfortunately moved with me from the awesome food my parents made as a high school student to the dredges of a dorm room and twenty something apartment living, herbs and spices became my best friends. Spices can make macaroni and cheese a different meal every day of the week. I worked at a bagel shop, and different herbs and spices in cream cheese literally spiced up my life!

One of the chickens watching me cook. Hello, Chicken!

Now that I can afford more flavorful, healthy and a variety of foods, spices aren’t as essential to making food palatable. Some people don’t season their fresh veggies and meats at all, ever. I must say that one of the best foods I’ve ever had was a perfect, early potato, peeled and boiled to perfection without salt, pepper, butter—anything. It was amazingly simple and flavorful. While many foods are naturally delicious like this, I still prefer to flavor my food with herbs and spices. Since the “Italian blend” of my younger days I’ve advanced into, what I consider, a fairly good understanding of the staples of an average spice rack: basil, sage, thyme, oregano, cinnamon, nutmeg, dill, parsley, paprika, rosemary, chili powder, garlic, salt, pepper…I’m sure I’m missing a few other staples…

A Chinese tea egg made by my friend, Betsy. Some spices, tamari and black tea make this egg beautiful and delicious!

As I’ve gotten much more into cooking from scratch, I’ve also gotten increasingly interested in expanding my seasoning horizons. Over the last several months, I’ve started to adopt a particular spice for an extended period of time. I use this spice very often for everything from baking, to cooking, to salad dressings. The amount of time I spend on one spice varies. I spent about two weeks baking and cooking with lavender in the fall. Rosemary-lavender sugar cookies are delicious, french lavender roasted whole chicken is a keeper. Cloves were the highlight of the holidays. Cardamom seemed like such a crisp clean flavor to accompany the early break up of spring. It proved to make a great coffee cake, and it goes well as a whole seed in the morning’s coffee filter. Next came Coriander—also a clean spice, yet warmer than Cardamom. The warmth must come from how it makes me feel—like I am in India or Central America. It has been the best in fried rice and other noodley dishes. I am now toying with Tarragon, which, unfortunately hasn’t seemed to match the height of summer too well. Luckily I’ve also doubled up with some Turmeric experiments, and we’ve been foraging for some tasty, seasonal treats!

Spruce tips harvested from the forest for syrup and candied spruce tips!

Evan and I have been creating “Salads in a Jar” for the last two weeks. We have fresh farm produce from the farm, edible flowers from the garden and we add in some cheeses, dried fruits, seeds or nuts as well. We’ve been making dressings from scratch—one of the best being a creamy tarragon dressing (which is great!). A couple tablespoons of dressing are put into a quart sized Mason jar. Hardy vegetables which won’t get too soggy (cucumbers, carrots, onions, radicchio, etc.) go in next, followed by other vegetables and greens. Finally, cheese and nuts go on top. If we use edible flowers they go on the very top of the jar to add a nice touch when it is opened. Closed up, these “Salads in a Jar” last for five days, and are great for work. We prepare all of the jars on Sunday, creating only one mess, and we have delicious, fresh, healthy, attractive lunches for the week. To eat them, all we need is a bowl to pour the salad into and a fork. Making our own salad dressings has been a great way to use different herbs and spices, too. They are awesome! 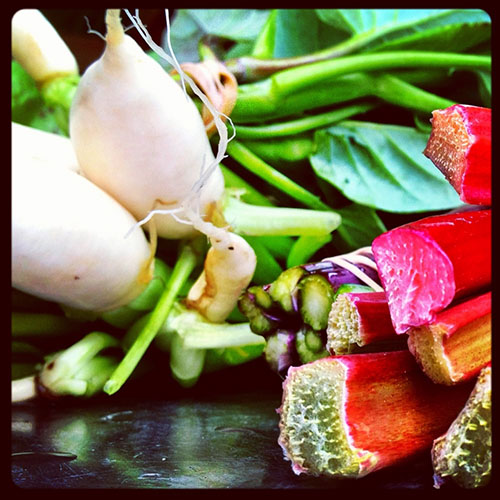 I’ll have to pick out a new spice as we head into the consistency of July… what will it be? Fenugreek? Cumin? Kaffir Leaves? Anise? Hmmm…

Until next time, my Farmgirl friends…

Sending you peace and love,
Alex