What do you think about the winter so far, Mr. Mustache Cat? 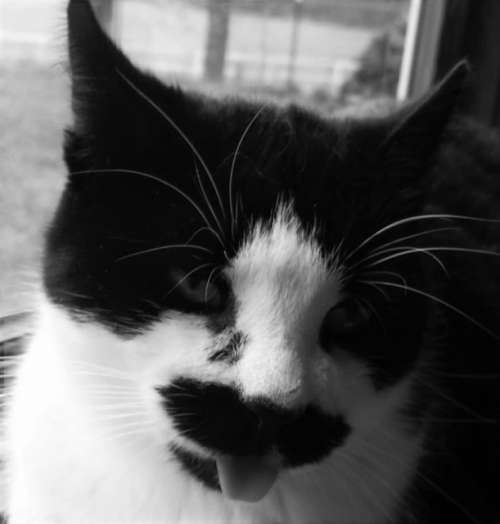 Yeah, me too. Wet and warm. Feels like summer to me!

I’d build a fire inside but it is too warm. So I’m sitting out beside a bonfire I’ve been trying to start for an hour. Where there is smoke there is fire? Not so here. So far, all I’ve got is smoke. I’m here to have quiet so I can “find” my theme for the new year and contemplate the 3 things I always like to think about when one year becomes another. I hear chickens squawking and glance over at the chicken house and run. The Mustache Cat, the feral cat, the one who now lives in my house and yard and is no longer wild, is up on top of the chicken house. I think I saw him licking his lips. I will be right back…

All’s safe. He was up there on the warm black roof sunning. I don’t blame him. It has been at least a week since we’ve seen the cheery rays of the sun. He was making the chickens below nervous, but he was just chillin’ not huntin’.

The last week, Christmas Week, was a soggy one. I think that’s why all I have so far is bon-smoke, instead of bonfire. All my wood is wet. None of us around here can believe this winter. No snow or ice. Too warm; much too warm. The winter we are having so far reminds me of my winters in Georgia. Mild. Too warm for a sweater. We haven’t had a sizable snow yet, only flurries. My “count the snow” beans (the ones indicting how many snows we’ll have this winter–the ones I put in a jar in August for every foggy morning) sit lonely and bored in their original jar, waiting in anticipation. Me too. And our local ski resorts haven’t had enough cold to make much snow for the slopes. I worry about people who rely on the winter tourist industry around here.

What do you think about the winter so far, Mr. Merlin? 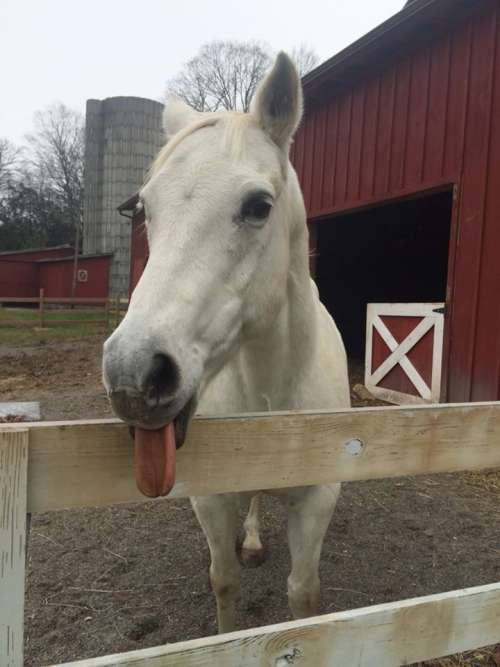 Too soggy for Mr. Merlin’s liking! He grew a thick, winter coat so that he would be comfortable in the sub-zero temperatures we USUALLY get. He is hot, wearing that coat in these balmy temperatures. When I was cleaning out the barn the other day, I heard him quote Jane Austin, “What dreadful hot weather we have! It keeps me in a continual state of inelegance.” The mud doesn’t help either. His beautiful white fur looks like this. 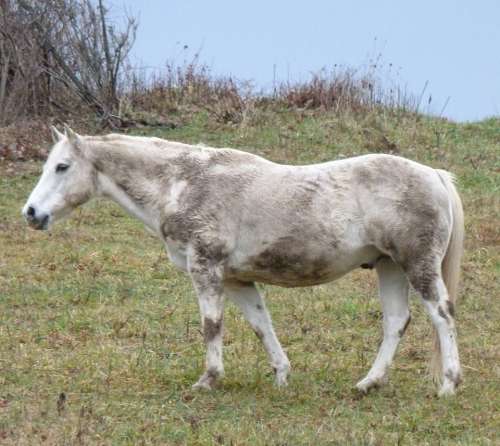 Now, to the topic of the changing of the year!  As the 12 months that comprised 2015 are drawing to a close, it is time to sit by the fire, or…um…smoke, and think. As one of my very favorite people always says, “Sometimes I sits and thinks and sometimes I just sits.” Today I’m sitting and thinking. To start with: what do I want 2016 to look like? What word would I like to make my own personal theme for the year? Ah! It just hit me. My theme for 2016. “Health.” Have you thought about your theme for the upcoming year?

Now, as we look behind us and think about the past year, I think about last year’s word theme. It started with “Hospitality” and then I added “Solitude.”

At the end/beginning of a year, I always consider 3 things. I had hoped to write them down and throw them into the fire in a dramatic gesture, but my fire is still not catching on. It looks like I’ll be throwing them in a pile of wet smoking wood. That must be symbolic of something? Don’t ask me what.

*What I did that scared me.

*What super stunk. The yuckiness of the year.

So, I’ll share and then maybe you will? If you want.

What did I learn?

Guitar. I would like to tell you that I finally learned to play the guitar. Nega-tory on that one. But I am better than I was. I can adequately play six or seven chords, so I’ve got that going for me. The F chord is improved but not conquered. (The F chord is known as the quitter’s chord, and believe me, it has made me quit many times since I first decided to learn to play the guitar.)

Horse. I did learn some horse-skills. Last year I gave up ever doing anything other than loving and taking care of my horses. I had given up being able to ride or do ground work with them. This year I spent enough time in a saddle that I can say these five words, “I can ride a horse.” Now, am I good? Or proficient? Nope. Do I gallop and ride all over? Nope. But “I can ride a horse.” An easy horse. A slow horse. A beginner’s horse. And I’m totally happy with that. I’ve had to learn that I’m not in competition with anyone. I’ve had to slow down and learn at my own pace as a person who had no experience and is afraid of horses.

I enjoy riding Cowboy Dan; and I can manage my wild Mr. Merlin now, so that’s huge. 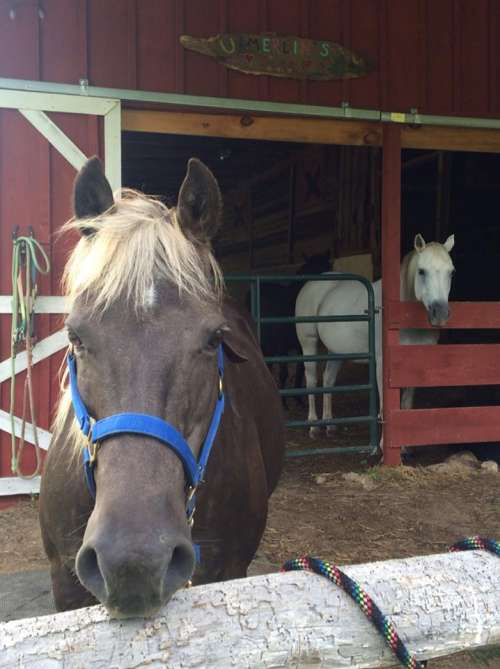 (That’s Cowboy Dan in the foreground. Merlin in the background.)

Life Lesson. A big thing that I learned is that, once again to quote James Taylor, “it’s enough to be on your way.” You don’t have to be there, to the end. It is enough to be making steps in the direction. It’s the journey, not the destination. Embrace and enjoy your journey.

Another Life Lesson. I also learned that “okay” is enough. Being just “okay” can be a wonderful thing. Perfection is over-rated.

I won’t list all the things I learned here, for fear of boring you. But I am making a comprehensive list before I’m done. I’ll consider my growth in the many different areas of my life. I’ll think about concrete things I’ve learned, as well as intangible ones. I’ll think about which lessons came easy and which ones came hard.

What did I do that scared me?

I used to be a thrill-seeker, years ago. I enjoyed adventure. Somewhere along the line I lost that. Well, I think the truth is that I still longed for adventure, but quelled it. This year I started to find that in myself again. I did some things I have wanted to do. Camping with my daughter for the first time wasn’t really “scary” but it was out of our comfort zone. We didn’t know what we were doing at all. We had a blast! And I’ve already got reservations for a campsite in spring. (read about it here.)

Now a time when I was scared to death was that midnight horseback ride in the black night that I told you about a few months ago. (and here’s that link.) That experience was over the top phenomenal.

And just last week, I zip-lined. Wow, now that is fun! Except for one thing. I like to go fast. Well, when I was on the fastest, longest line, I tucked up to gain even more speed. And then when I went to brake, something weird happened to my braking glove. Don’t ask me what. But I couldn’t slow down or stop. Do you know what happens when you can’t stop and you’re at the end of the line? It was called an emergency stop. And I’m here to tell you: it did not feel good at all! But it felt better than slamming into the tree would have.

I can’t think of anything else scary I did last year, but surely there was more? Parenting is pretty scary, maybe that counts? Yeah, that counts.

The other thing about when considering the passing year is the hard part, the part that stank. I won’t go into details, but there were plenty of stinky parts. Plenty! Yes, this is one year I’m glad is coming to a close. I’ll write out many of those stinky parts and throw them into the smoking wet wood in front of me. Goodbye. Up in smoke. See ya.

The thing I know about very difficult things is that they foster creativity, appreciation, and growth. Ah, Another Life Lesson Learned!

These same 3 things are the things I’ll consider when I think about my goals and dreams for 2016. What do I want to learn? What do I want to do that scares me/is out of my comfort zone? What can I do to be prepared for and deal better with the inevitable stink?

Again, I doubt you want to hear the details on that, but I’ll be sitting here, all alone, contemplating those things. I won’t throw that list in the fire though. It will go in my jewelry box where I will refer to it and refine it throughout the next 12 months.

What do you think about the New Year, Mr. Blue? 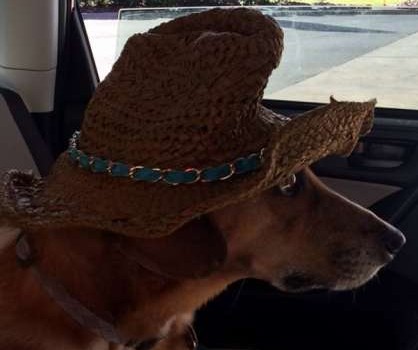 Dressed and Raring to Go! You talk about someone who is always up and ready for anything? My Dog, Blue!

I’m wishing each of you wonderful friends a fulfilling and fantastic 2016!! Live each day large. Savor every moment. Chase your dreams. Seek what makes your heart sing and let it sing. Loud, colorful, off-key.

Jude, another barn cat that lives in my house and not in the barn, screams HAPPY NEW YEAR! 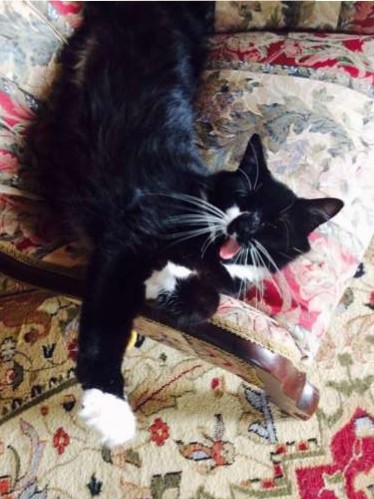