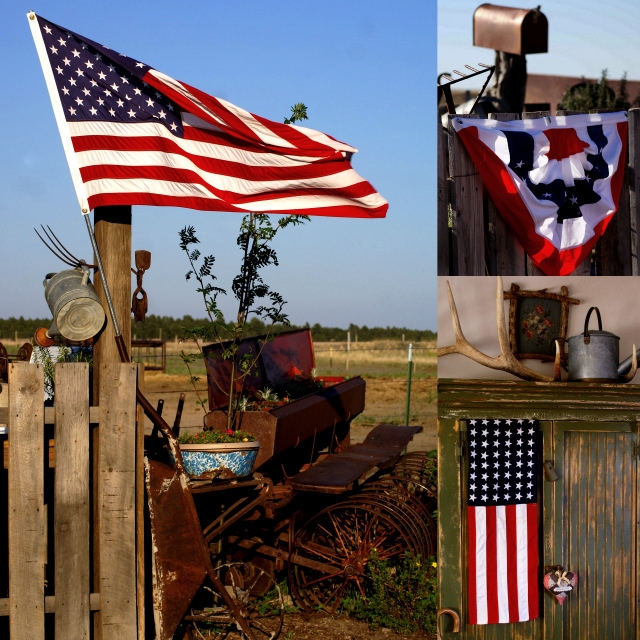 Every farmgirl is a farmgirl every day because the whole concept is a state of mind. We all have various ways of living the farmgirl life … depending on our circumstances. Our gardens aren’t identical in size or appearance, neither our homes or our “farms”. Some of us hang our country’s flag off the fron’t porch while others fly Old Glory high on a pole in their yard. Me, well, an old wheelbarrow handle is a make-do option. The farmgirl way is all over the map. C’mon in and see how my farmgirl pals and I do our own thing … and then share how you express your own unique farmgirlness.

When I began taking morning walks in our back pasture, I noticed that “A rose is a rose by any other name”, however, not all wild roses are created equal. Even within the same species, there is a lot of variation … true in all of creation really. And, so it is with farmgirls. My farmgirl pals and I have much in common, yet we’re so very different in many ways. It is the sameness and the differentness that makes it all so charming and special.

Anita played hostess to our most recent farmgirl get-together (pink blouse, below). Some of the hens in our flock couldn’t make it to her last basket-making lesson, so she repeated the workshop for our group project this go around. We also got to tour the ranch and her huge garden etc. She prepared a lovely meal and in our wine glasses (see in several photos) she poured homemade rhubarb wine. Here, I’ll take you through our time spent together.

The beginnings of our basket class …

A little further along …

After they were made, we dipped them in black walnut stain and then hung them on an Aspen branch to dry.

Anita’s house is a bermed home that she and her husband built themselves.

Anita’s husband, Jerry, built a nifty little fountain from “ranch junk” and an old chicken waterer. The tom turkey followed us around during the farm tour. He loves visitors and struts and gobbles for everyone. His mate is raising her next batch of babies.

When Anita’s Jersey milkcow had her baby, Anita was thrilled to get a heifer and more so to get a rare piebald beauty like little Miss Victoria.

Back at home, I’ve been trying to do some in-house organizing – a long overdue project. Whilst doing so, I rediscovered a huge elk antler that I found a few years back while riding and gathering cattle.

Had to find places too for my most recent craft projects. These are things that you, too, can build if: you’re a MaryJanesFarm sisterhood member and if you’re a handy woodworker (or know one). Both designs (below) will be published in the next newsletter (The Cluck). One is a birdhouse and the other is a smaller scaled bank. I designed them and then my farmgirl pal, Michele, made them. She’s a one-woman birdhouse factory!

Since it is “glamping” season, little camper craft projects came to mind.

Even though we have few birds that are ‘house’ birds, I still like to have several around for the bluebirds and swallows to choose from. Most of our birds are varieties of sparrows that inhabit the plains. They make their nests in the tall grass and sagebrush.

One of the other resident birds we have – since a seepy creek and a reservoir is nearby – is the killdeer. Over the last two weeks, I watched with keen interest a nest made in the pebbles. I checked it every morning and night in the hope I could get photos of the babies. But, they can practically run out of the egg and I missed both their arrival and departure. Poo! When I would check the nest, the parents would do what killdeers are noted for: the broken wing act to lead possible predators away from the nest site. 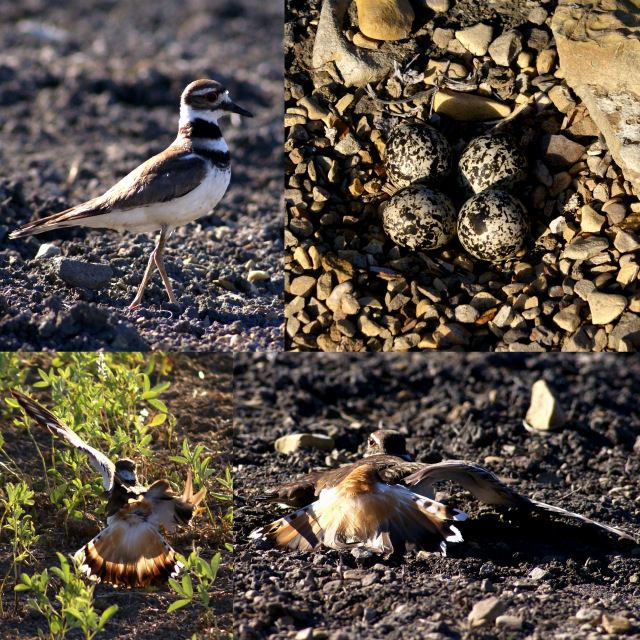 I noticed the other day that my young mare, Ribbon, finally looks like a mature horse at age five. She’s all grown up now. 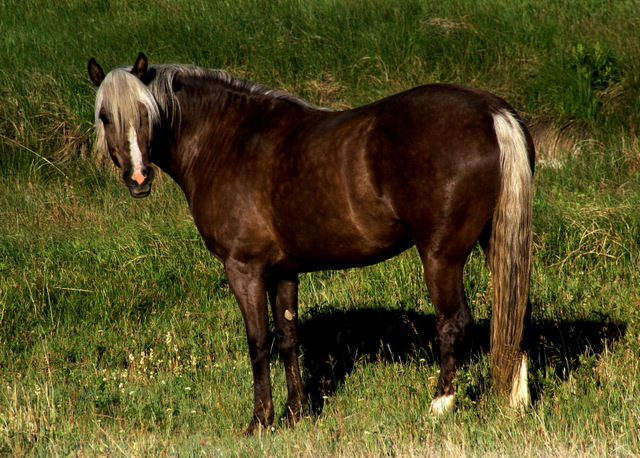 Some things in your life don’t get as much attention as others … and maybe it is because they like it that way. My kitty, Smudge, isn’t a lap sitter or a cuddler and she doesn’t like to be picked up. But, she has to find me and say hello when she comes inside in the morning. She follows me allllll over when I go for walks in the pasture and she loves to hang with me in the garden. She’s my reserved, but loyal, little friend and I like her independent ways. We’re not so different, she & I. 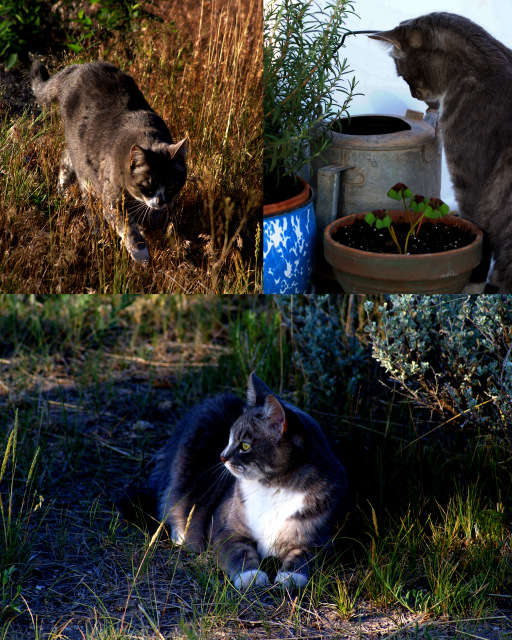 My other kitty looks very much like Smudge. “Be-Kay” (for barn cat who wanted to be more) is her diametric opposite. She doesn’t know a stranger, she’s eXXXtremely affectionate, won’t leave you or anyone else alone, talks back if you begin a conversation. She is on you, near you or next to you and she begs to be held. I should have named her Velcro. Another lesson in seeming sameness that is only superficial. 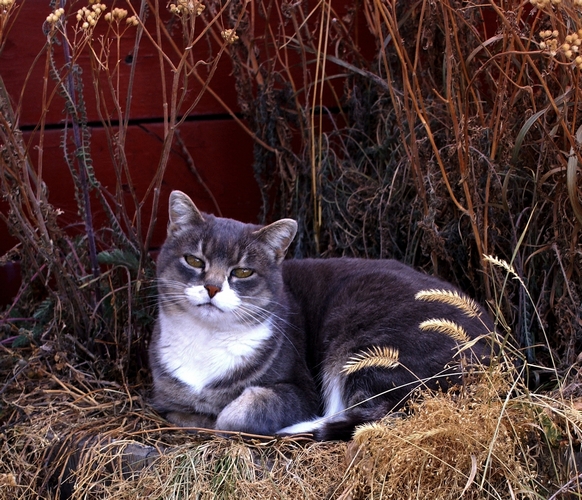 Well, in the ranch sector, we’re almost at the end of branding season and we helped with probably the last one on the radar. 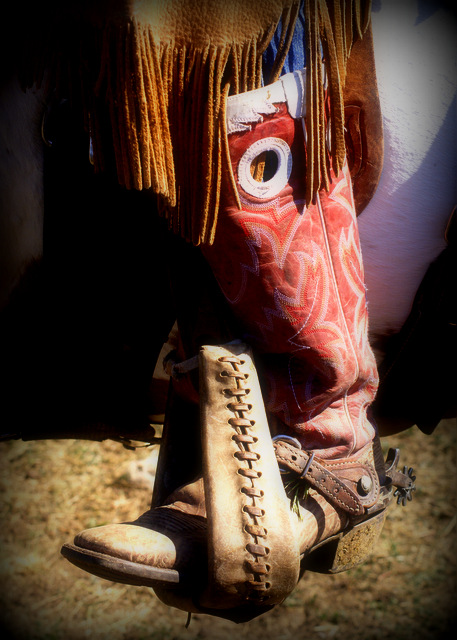 The other morning we gather the cattle for our friends and then some of us waited around while the rest of the crew worked the cow/calf pairs apart in preparation for the branding. Our young friend, Jessica, relaxed on her horse while we waited. 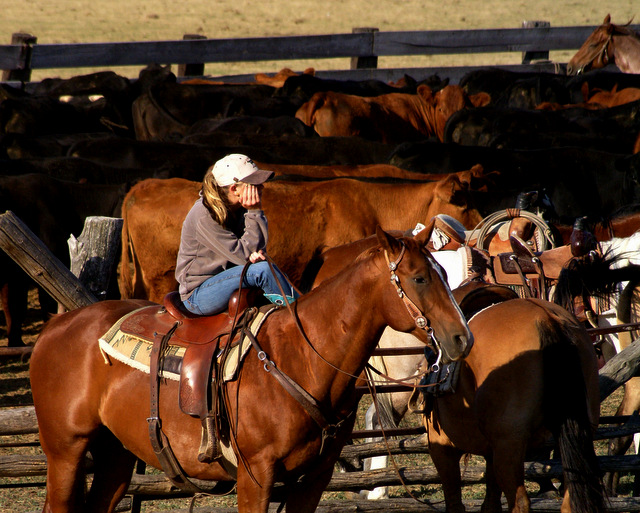 Soon, the branding stoves were turned on and we went to work. My job this day was to photograph the goings on for the ranch owners. I do that quite a bit if there is enough help to handle all of the other jobs.

Below is another friend, Ellis – 88 years young and still in the saddle! 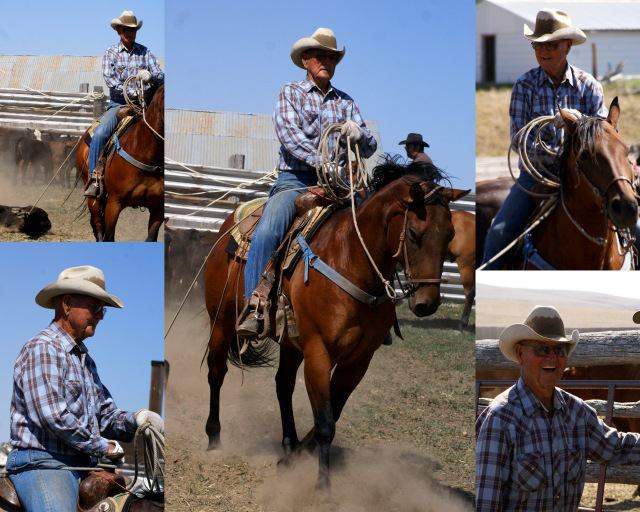 Two of the ropers visiting while the calves they’re tied onto are being branded and vaccinated.

My young mare, Ribbon, pulled a “Houdini” that morning — meaning that she let herself out of the corral I overnighted her in so that she’d be handy to catch in the morning. So, since my ‘old reliable’, Dolly, has been in the diet center pasture by the house, I rode her instead. What a luxury. With a young horse, you have to think about every little thing you do. Not so on a ‘been there, done that’ horse. Dolly is now 23, not retired, but I don’t take her on long, hard  rides (several hours and miles). Toward the end of the branding, I asked my husband to ride her for a bit so that I could get probably what will be the last pictures of her dragging calves at a branding. As far as horses go, she is THE love of my life. We began our journey together 21 years ago and my life would not be my life withour her woven into it. She IS the best horse in the universe. Damn straight. She’s kept me safe, worked willingly under me and when she wasn’t working on the ranch, she had seven babies for me. Seven! She owes me nothing and I love her with my whole heart. She’s a beautiful horse from the inside … out.

So loving, so kind, so gentle, so willing, so fun, so active and in addition, she is ten kinds of tuff. She is a farmgirl with hooves :o) 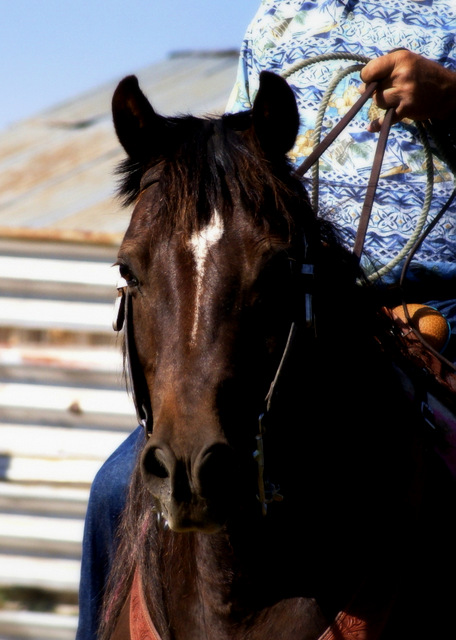 Below: The human love of my life … Lynn … riding his own horse, “PI”. I bought him as a yearling for my husband and I named him too – after the simple-minded cowboy in the movie, Lonesome Dove. PI (the cowboy) was not the sharpest knife in the drawer, but he was a loyal friend, a hard worker and honest to a fault. PI, the horse, is exactly the same. He is the most polite gentleman you’ll ever meet and so affectionate. In the photo below, he and Lynn are “fishing” for a calf. Sometimes roping a calf is more action oriented, but ideally, keeping things calm and slower paced is much more efficient. That is actually true of working cattle in the general sense. You can get more done and get it done faster if you work slower (and more patiently).

As the morning wore on, it got hot … really hot. Jeri (the ranch owner) poured water from the stock tank on her shirt to keep cool.

Afterward, we ate lunch and went home. I love to be outdoors, but I draw the line when it is really hot. I retreat to the great indoors. 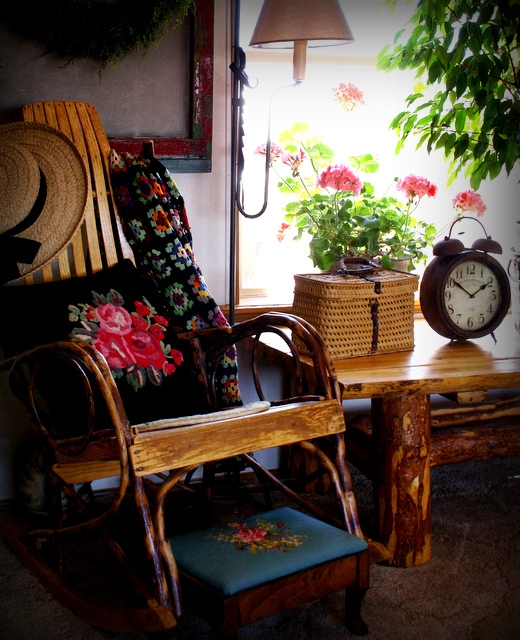 In the heat of summer days, I do inside things … those things I put off until either winter or heat make me stay inside. This summer is desperatetly dry, tinder box dry … and UGLY. What little grass there is, is crunchy and it is only the end of June. Thank God for my garden oasis. I’ve lost a few plants due to such dry conditons. Blast furnace winds and flowering plants don’t mix. So, I replaced some of the flowers (like lobelia) with moss roses. I should have just bought them to begin with. They thrive on heat and intense sun. Towards dusk I water things … my garden and flower bed. We often don’t eat supper until late in the evening in the summer. Just too much to do while it is yet light. 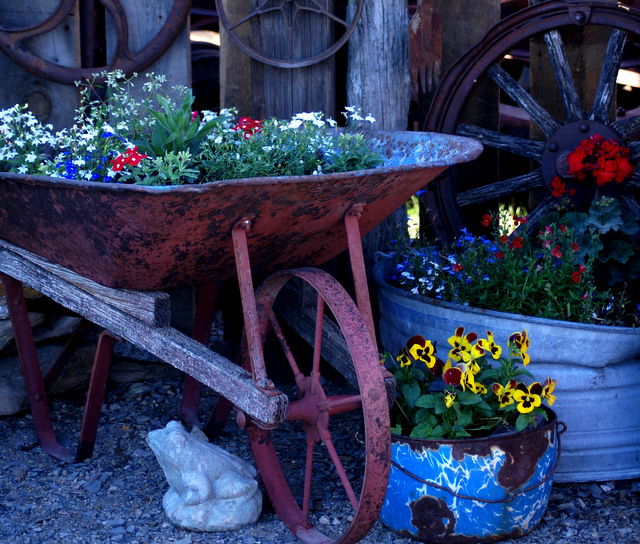 The horses are relieved when the sun drops. They leave high ground where they loaf and avoid bugs during the heat of the day … and go out to graze at night. If it weren’t for the mosquitos, I’d love to lounge outside in the evening. Hopefully that screened in porch that I’ve been dreaming about will soon be a reality. Maybe you have one? Well, stay cool my friends and I hope you have a great celebration of Independence Day. God Bless America … and may He bless you too.