I noticed it almost two weeks ago–the day of my last post, actually!  Fall.  It was here.  There were perfectly yellow birch leaves littering the walkway to the yurt.  I felt like wearing a vest.  It was sunny and crisp, and the hint of a breeze made the aspen quake.  There was that unmistakable smell of autumn on the barely distinguishable wind.  A fluff of fireweed seed lingered just out of reach. 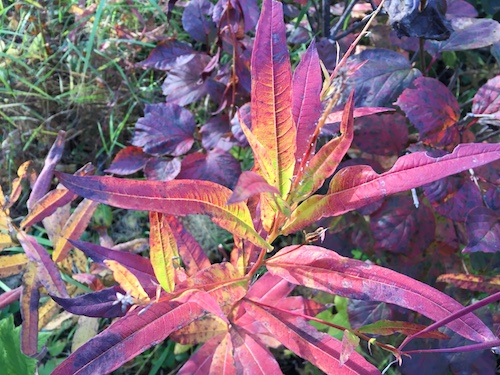 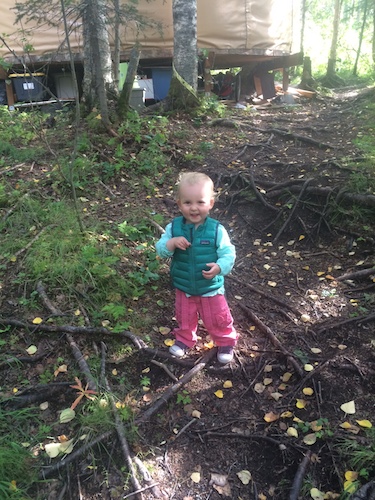 First day of fall–vests on our chests and leaves on the ground.

And then, it really happened!  That night (it was only August!), we had our first frost.  It wasn’t very hard, but it was enough to leave some frost on the westerly facing roofs and to damage the majority of the leaves on the squash plants.  It seemed to come without warning!  Bam. Fall.  The next night was cold, but not freezing, and then we had two more nights of harder frosts.  Good bye squash!  Good bye beans! Good bye peas (good riddance to the peas, I say as a pea harvester)… 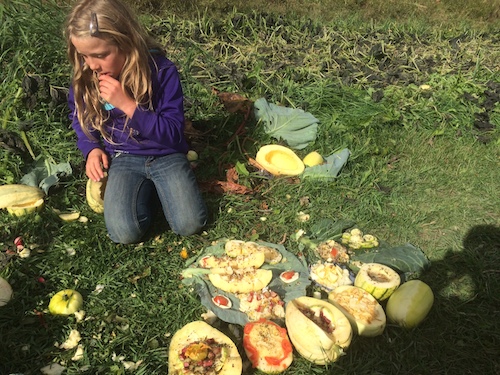 Leila creates some gourmet masterpieces out of the spaghetti squash that didn’t ripen enough before the big freeze. The pigs will LOVE it.

On Saturday, I couldn’t bring myself to clean produce in 32.1 degree water, so I ran a hose from inside the house. After some hose hunting, wrangling and dragging, it was actually quite lovely to scrub carrots, radishes and beets in the cool-but-not-freezing water.  This might become a regular habit. 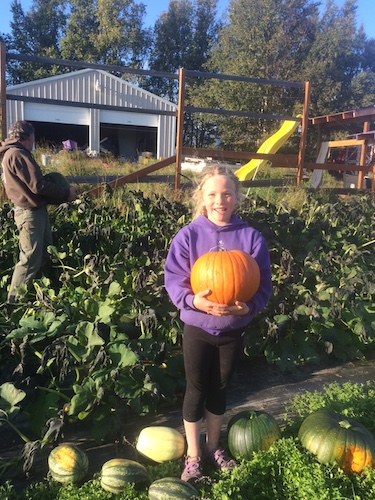 Our Sunday farm stand harvest that week (the morning after the first hard frost) was the first of our true fall harvests.  Most things were a bit frozen or frosty.  The hoses worked, but threatened not to.  The peas had a translucent tinge.  The squash had all been harvested after the first frost and were ready to go; their vines were sad and dead. The cutting greens and spinach needed some time to warm up and get their juices flowing again, and the broccoli and cauliflower all felt a bit solid…Luckily, the things in the high tunnel green houses were just a bit chilly, but NOT frozen.  A cold, fresh, sweet tomato for breakfast dessert? Yes please! 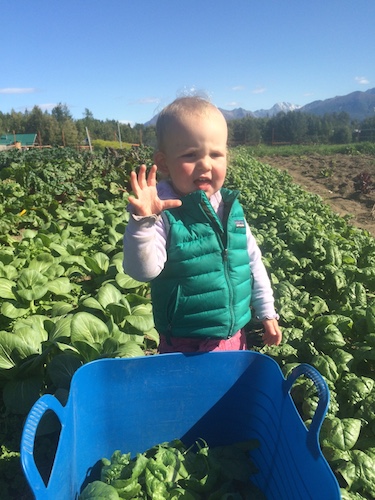 Mama’s little spinach picking helper. Can you see some snow on the mountains in the background?

We woke up the days after those frosts to termination dust on the mountains.  Termination dust is the first sign of snow on the mountains surrounding the valley.  It indicates the “termination” of summer.  It has come early this year! I remember my first year in Alaska it didn’t show up until a few weeks into September.  The last couple of years the tops of mountains have taken on the white hue of an aging head of hair consistently during the second week of September. This year, after the first frost (in August!) there was just the smallest shade of white on Pioneer Peak, the tallest mountain bordering the valley.  By the next frost, it had moved considerably down the mountain and had crept to other, lower mountains, as well.  The snow usually doesn’t stick around all day, but it is a friendly morning reminder to bundle up. 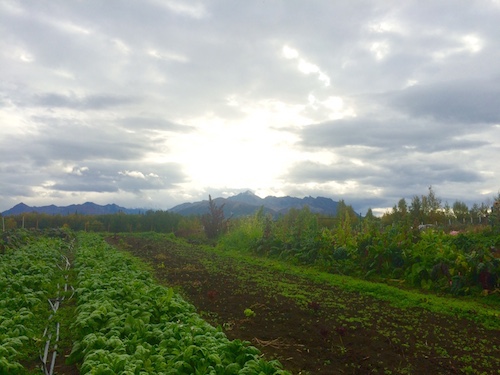 Matanuska peak, yesterday morning. Can you see the dust?!

Close-up, can you see it now?

We left for Colorado the Monday after this weekend of freezing temperatures.  Denver is hot.  it was almost ninety five degrees one day! Whoa…that’s the hottest we’ve felt in a very long time.  The heat combined with the altitude was a bit shocking, to say the least.  It was an excellent day to go to a museum.  Heading up into the mountains for the second part of our trip was a welcome reprieve from the heat; and we got to attend the beautiful, simple, picturesque wedding of two of our dearest friends.  The intense love that radiated from all things in that celebration was decoration enough! 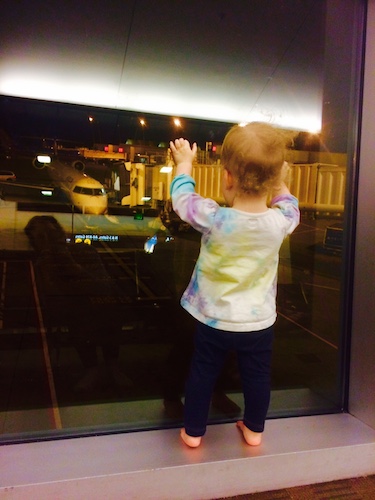 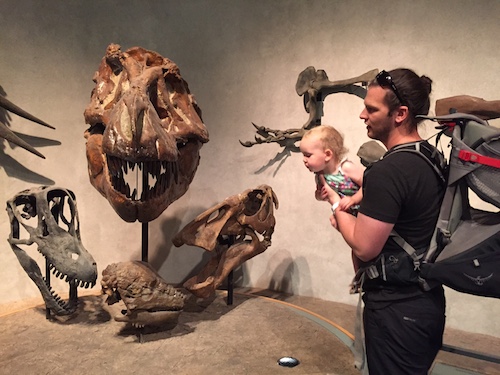 Checking out dinosaurs at the Colorado Museum of Nature and Science. What big teeth they have! 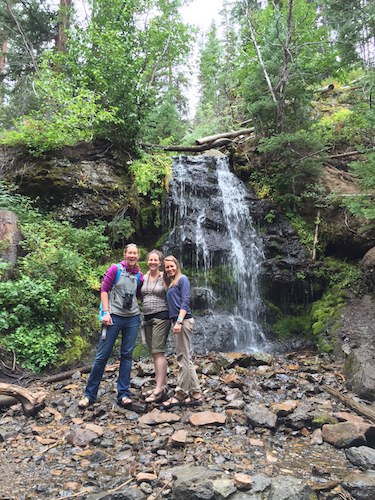 Weddings bring good friends together! This is the Waterfall Hike at Snow Mountain Ranch in Granby, CO.

Luckily, there have been no more frozen temperatures since we left and returned!  It has just been “warm and wet.”  Warm is a relative term…It pretty much just means that it hasn’t frozen.  The lows have been in the high thirties and low forties.  Daytime temps have been in the upper fifties and low sixties.  Pretty nice–especially when the rain stops!  Autumn is such a wet time in Alaska, it is much different than the dry autumns of the midwest that I grew up with.  Any way it goes, I love the fall!  The cooler temperatures, the changing colors, the late season veggies (I can’t wait for my first brussels sprout…mmmm).  Bring on the termination dust!! 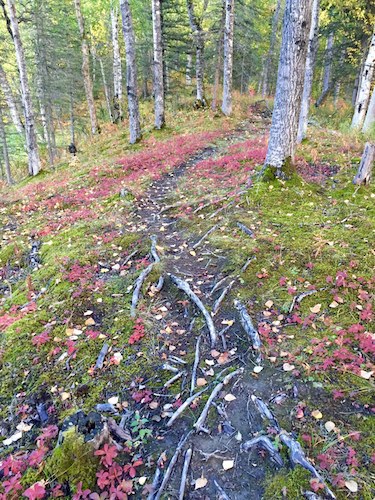 One of my favorite trails. It is so fun to see the seasons change on this walk.

Any signs of fall where you are?  Hope all is well wherever this finds you!