Posted on May 6, 2015 by Rural Farmgirl Alexandra Wilson

{{{First off, a big HAPPY (belated) BIRTHDAY!!! to MaryJane!  I hope your day was fabulous and full of all of the love you deserve (which is heaps and mounds plus some).}}}

Ahhh, yes!  It is finally here–long days in the sun, wind and rain.  My days of watching and teaching kids outside has given way to mornings of planting seedlings, afternoons of weeding and mad dashes to harvest enough goodies for hungry customers.  It’s the outdoor growing season!  It’s here! 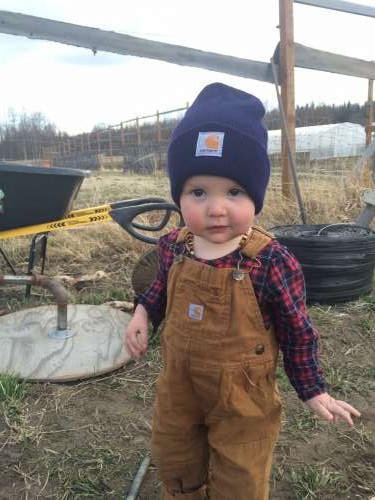 While it’s just starting for me, farmers throughout Alaska and elsewhere have been tending their indoor starts, combing through depleted supplies and reordering what is needed, making sure their labor force is strong enough for the coming season, tweaking crop plans and practicing their marketing skills to attract customers.  In Northern climates, farmers (and gardeners!) have also been strategically planning how they will use the many tools of the trade to give themselves as much extra time on either end of the summer as possible. 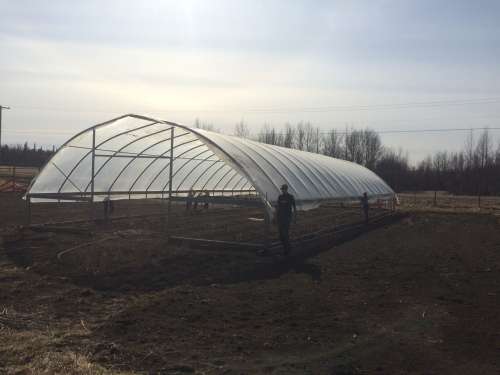 One of the most ubiquitous season extension tools seen in Alaska is the “High Tunnel.”  The USDA’s Natural Resource Conservation Services has been allocating price-matching or other similar grants for purchasing these large green house-like structures for several years.  These are high quality metal structures that are covered tightly with plastic using wiggle wire.  The plastic is taken off during the winter months because they would inevitably get shredded in the winter winds.  The plastic lasts 3 to 5 seasons, typically.  We put up the plastic on Sun Circle Farm’s high tunnel two weeks ago.  This is the second year I’ve participated in the “skinning” and it went much smoother than last year–which was also much smoother than the year before!  Practice does make perfect.  The high tunnel is used to grow warm weather crops like tomatoes, peppers, melons, beans and corn.  It also houses early greens and early root vegetables like the delicious hakurei turnips and radishes! 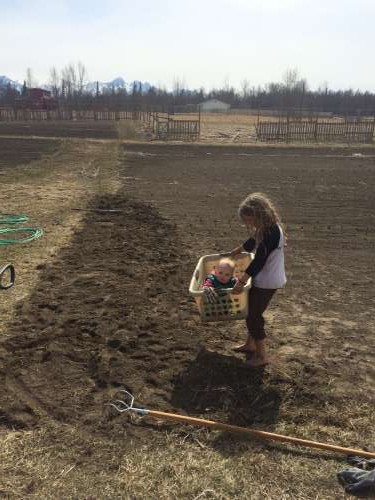 squaring off field edges for some uniformity.  The mobile high tunnel is going in the back part of this field.

The farm also got a new “mobile high tunnel” this year.  It seems very cool–it is on tracks so it can move back and forth across a field, crops can be started in it in the early season, and then the structure can be slid over, allowing the crops to mature in the open air.  It can also be moved over crops that were started outdoors and then need to be covered at the end of the season when frost is likely.  It hasn’t been completed, yet, but I am so excited to see it in action! 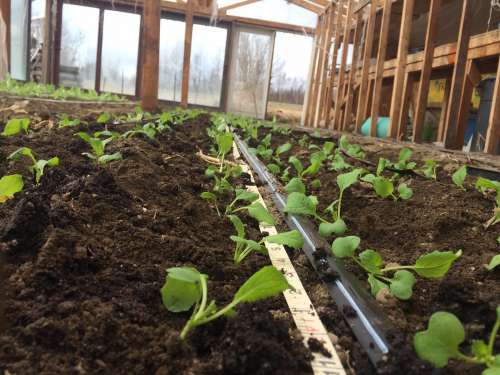 Turnip seedlings inside the “Glass House”

As far as other structures on the farm–there is a “hoop house” which is made of hoops of rebar and covered in the same plastic used on the high tunnels.  This typically has beans, squash or melons in it and is taken down every season so it can move with the crop rotations.  There is a “glass house” which is a more typical, permanent greenhouse.  That has already been planted out with lettuce, kale and choi starts.  We also planted out about 600 little turnip plants!  Who transplants turnips?  Alaskans!  Hopefully the root maggots won’t get to them this year… 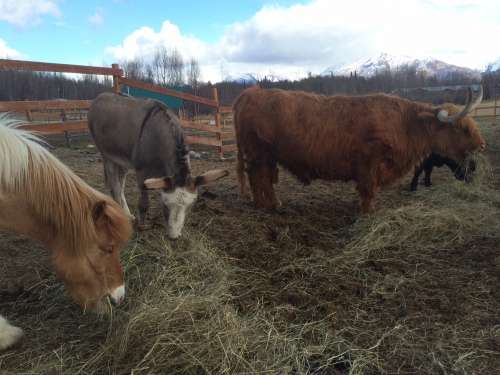 Seedlings on the farm are started on big metal racks with grow lights.  They are then moved to “harden off” in several steps.  Hardening off is the process of getting delicate seedlings used to being outdoors.  First, they go to the “hot house” which is a glassed in room that is connected to the house but only accessible from outside. They stay here for a few days. Next, they are moved to cold frames.  These are boxes that are built on the ground.  They have giant lids that can be lowered at night when the temperatures are still pretty cold.  During the day, the seedlings get their first doses of direct sunlight. Sometimes, cold frames are lined with composting manure or something else that will keep them warm during the night, but not the ones at Sun Circle. After the big rush of seedlings is over, the hot house is planted out with basil–which LOVE being hot! 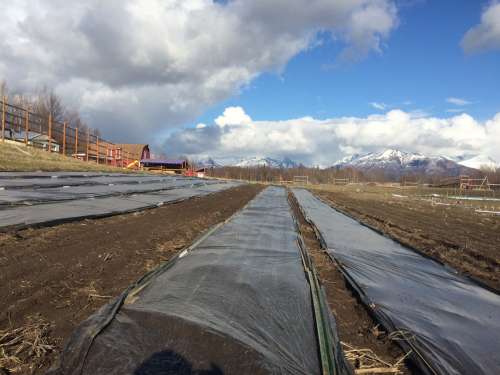 IRT on the beets and carrots.

Out in the open fields, season extension is a bit simpler.  We seeded several beds with beets and carrots (two weeks earlier than we ever have before!).  These are watered in really well and then covered with IRT (infra-red transmitting mulch)–it is a dark green plastic “mulch” that discourages the growth of weeds but heats up the soil so those happy little seeds can germinate quickly (or, you know, as quickly as carrots will germinate).

Other outdoor crops are covered with floating row cover that is suspended over small hoops.  This protects from light frosts by keeping the temperature a couple of degrees warmer at night when the temperature is still dropping to twenty nine or thirty degrees.  Floating row cover (or re-may, as we call it) is my least favorite tool of all.  I really dislike how it feels on my hands–it kind of feels creepy, if you know what I mean.  Plus, organic farmers usually don’t like wasting things so it is reused year after year.  The feel of it doesn’t get better with layers of dust and dirt.  Eeeew, it gives me the shivers just thinking about it!  Plus, it gets pulled and twisted in the wind.  But, I guess if that’s the worse thing I have to deal with, my job is pretty good! 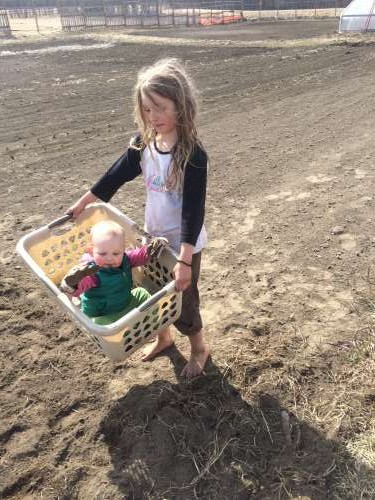 We’re also in the “stinky” part of the season, when we are ammending the fields with fish bone meal and feeding new seedlings with “fish funk” aka fish emulsiun and kelp meal.  My dog thinks I smell pretty darn awesome! 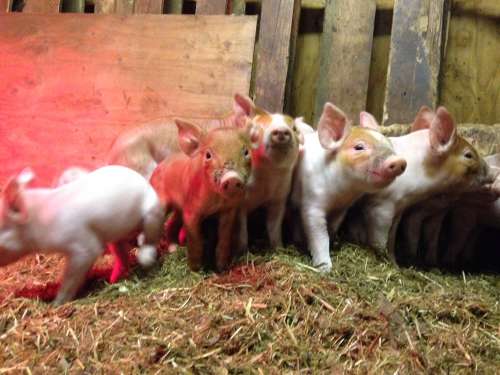 A photo of some super new piglets from about a month ago. They aren’t so little anymore.

That’s where we’re at in our Alaskan farming adventures–how does it look in your neck of the woods?  We are looking forward to another great season and hope yours is looking great, too!

Sending Peace and Love From Alaska,