It has been a drastically, devastatingly warm winter up here.  The grass is turning green in many lawns.  A friend even had to mow her lawn!  In Alaska. In February.  There are rumors that the salmon run will be in April instead of its normal mid- to late- summer run.  As of Feb. 11 only 19 inches of snow had fallen in Anchorage, and it rained for the last five days melting almost everything that had accumulated.  The start of the iconic Iditarod sled dog race has been moved from nearby Willow (about 45 miles from here) to Fairbanks (330 miles from here); they are even having trouble in Fairbanks with thawing rivers. 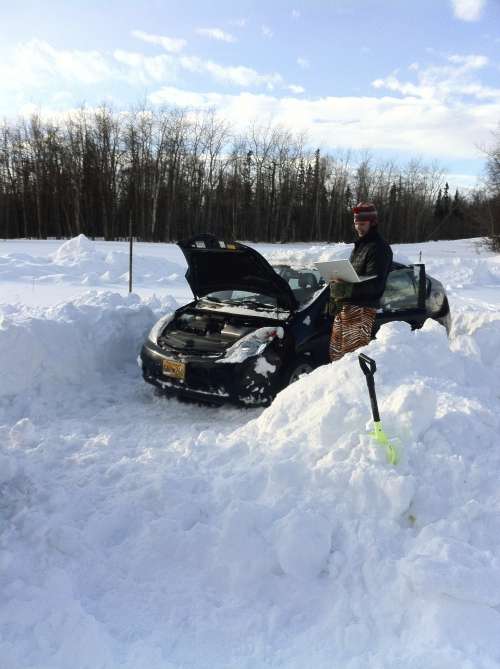 It’s definitely not this kind of winter. This was taken almost exactly three years ago.

This is due to the warming oceans.  Surface waters in the Bering Sea and northern Pacific are the warmest on record.  Because of strong climatic influences from the oceans, most of Alaska has been much warmer (and less snowy) than average. 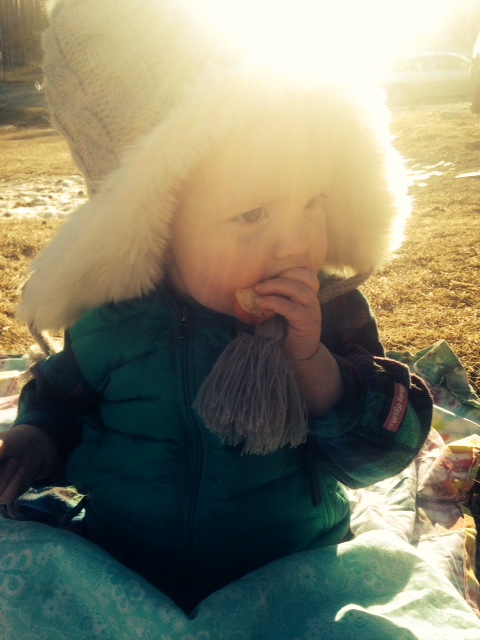 We had a picnic. In February. In Alaska. No big deal.

I don’t know if this bodes well or ill for the coming farming season.  On one hand, we will probably be able to get into the fields pretty early because there won’t be standing water and frozen soil through mid-May.  However, it’s looking like we are heading for drought…A bad word for any farmer.  What good are early planted seedlings and sowings if there isn’t enough water to nourish them?

While it has been warm and raining down here near sea level, it has been snowing in the mountains.  So, if we want to see the fluffy white stuff, we have to get up to about 2,000 feet of elevation before it is significant.  Luckily we live very near to a gorgeous mountain pass.  I visited just yesterday and what was rain down here was nearly a foot and a half of fresh snow up high!  It is SO gorgeous.  The only thing I could wish for is a high altitude barn to wear the sparkly coat of heavy snow.  I still LOVE barns and silos in the snow! 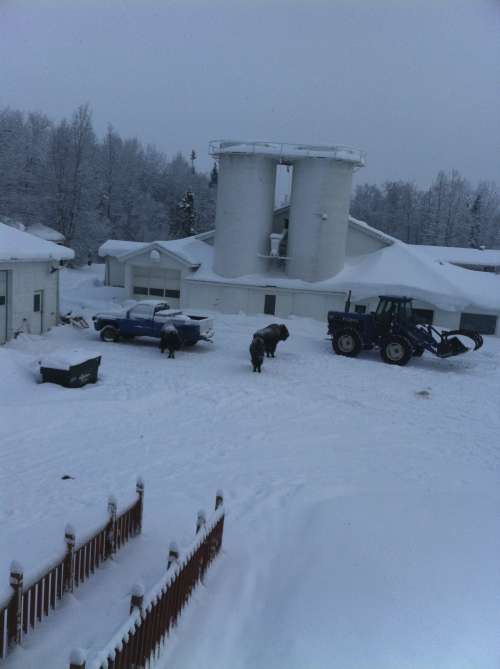 This is the same farm as the first photograph but taken three winters ago. The bison had escaped their pasture by climbing the giant snow drifts!

The lack of snow seems to us snow lovers akin to an unwitting sacrifice. It’s something we’ve been forced to give up.  A good friend who generally skis all winter despite pretty bad back, hip and knee problems thinks that the forced rest over this winter is probably helping him recuperate.  The warm weather and lack of snow has made transportation very easy.  The moose population that took a hit a few winters ago with super deep snow is on the rebound.  We are encouraged to look up at the beautiful snowy mountains.  I got a new shovel for our friends as a Christmas gift, and it hasn’t been used!

This “sacrifice” reminds me of Lent.  Lent is a funny time for me.  I was raised Catholic and come from long lines of Irish Catholics from both of my parents.  My friend has a similar background and we discussed how we feel “culturally Catholic,” much like many Jewish people are “culturally Jewish” but are not necessarily “religiously Jewish.”  I still feel a good amount of good ol’ Catholic guilt, so Lent is something I still feel obligated to practice (even though I haven’t been to a non-funeral, baptism or wedding mass in…a long time.  Nature is my church!).  It is hard to give up old habits, and it’s easy to feel guilty when you assume the big wo/man upstairs is tsk-tsk-tsk-ing you as you break your Lenten promise.

I felt like I needed a good dose of guilt, so I gave up the white stuff.  Not the rockstar kind but the kind that makes grandkids everywhere adore their grandmothers, the kind that keeps dentists in business, the kind that Americans eat in excess, the kind that appeals to our primal survival instincts–SUGAR.  Since Evan is a stand up guy, he gave it up, too! 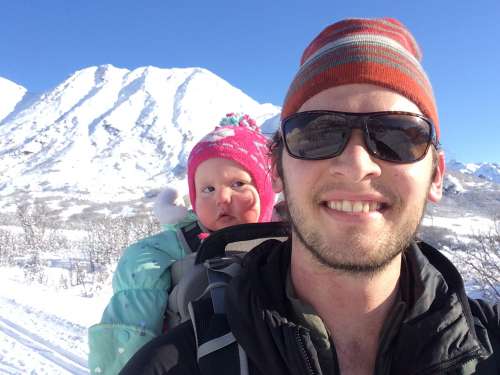 Evan, the stand up guy, finding snow with Ava at ~3000 feet.  She seems skeptical.

We are only a week into the Lenten season, and both of us have broken our promises a few times.  I’m sure we’ll be smote for it at any minute.  For the most part, though, we have been very good.  We aren’t too concerned with all of the rampant hidden sugar that is present in pasta sauces, bread, yogurt, condiments, etc. mostly because we really don’t eat that much of those things.  We are mainly concerned with straight up sweet things–candy, cookies (my weakness), ice cream, fancy espresso drinks, and chocolate (perhaps the hardest sweet to give up!), and sugar in our coffee or tea.

I found myself filling my sugar void with various forms of bread: fresh loaves from the bakery, bagels, and flour tortillas.  I also found myself feeling some withdrawal symptoms–slight headaches and intense cravings.  I am addicted to sugar!  Sugar addiction is a real thing that has been (perhaps controversially) studied in mice.  I don’t fully understand the biology of it all, but sugar does some disturbing things to the happy chemicals in our brains, especially dopamine.  It acts on the reward center of the brain somehow, and it doesn’t sound good.  I can handle the guilt of getting bigger hips or some love handles; but I do not want to mess up my brain by doing something silly like eating too many brownies in my day to day life (but I am not wholly giving up brownies…what kind of life is that?!).

Now that we’re a week into our “sacrifice,”  both Evan and I have noticed that the cravings have gotten much better.  We’ve also noticed that everything tastes sweeter.  Cow’s milk is sweet!  Apples are super sweet.  Sweet potatoes are almost too sweet.  I bet a soda would be nearly unpalatable (but soda is not one of my preferred sugar intake methods).  With my new palate, perhaps dessert can start come in the form of a carrot or stalk of celery (fat chance!).  I’m hoping I can keep up this practice well after Easter, as I’m feeling good and I expect to feel fantastic as the next 33 days whiz by.

So, while years past have seen a celebration of the white stuff, this year is a bit different.  We’re lacking it both in our environment and in our food!  If we get a big snowfall will you find me single-mouthedly putting back a box of chocolates?  Hopefully Mother Nature will test us, and maybe some Girl Scouts, too.  I also hope I pass the test.

Are any of you participating in any spring time challenges or acts of self-denial?  How is the snow where you are and how does it affect your Farmgirl ways?  Let us know!

Sending Peace and Love from AK,