“It is one of the blessings of old friends that you can afford to be stupid with them.”
Ralph Waldo Emerson 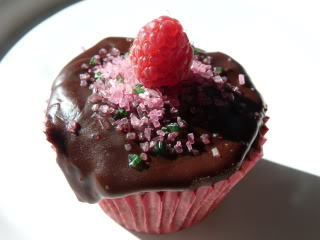 That Ralph! He knew what he was talking about, didn’t he? He is totally right-on.

Old friends are special for many, many reasons. But one is that you can be yourself. You can be your goofy, funny, silly, crazy, stupid self with people who have known you forever. Who love you anyway. You don’t have to be what you’ve become. (Old and serious?) You can be the way you were. (Young and stupid?)

I have one friend, Rosann, who has been a great friend since 7th grade. I could go on and on about her and probably have before here. But the thing I enjoy the most about us is the "stupid" thing Ralph mentioned. When we meet for lunch, we giggle and carry on and generally disrupt whatever restaurant we are having lunch in. And, invariably, we are late getting back to work. (I need to call her, it’s time for some of that old friend fun again. The holidays were so busy and this weather so crazy, we’re behind in our lunch date!)

But I have had a friend even longer than 7th grade. My oldest friend of all is someone who has been a friend since I was a toddler. I loved him then, and I love him today. When we lost touch for many years, I missed him like crazy. And then, out of nowhere, he showed back up. You can’t imagine my joy when he was at my parents’ house one Christmas Day. When I saw him, I squealed and hugged him tightly. I cried just to lay my eyes on him again.
My oldest friend of all is a teddy bear. Those years that he went missing, well, I mourned him terribly. I was convinced that he had accidentally been thrown away. I was so sad that such a thing could have happened to something/someone that meant so much to me. How could I?
In fact (thank goodness!), he was lost at my parents’ house. I can’t recall how he got back there to their house; he always came with me when I moved from one place to the other. And there for awhile, I was moving a lot. 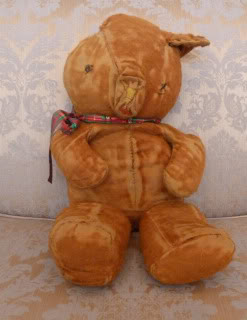 But somehow, there he was, back at my parents’ house. And when they were searching for Christmas decorations a few years back, they found him in the attic, stuffed into a plastic bag.
My Mom put a bow around Seddy the Bear’s neck, wrapped him up in bright Christmas paper, and put a very special box under the tree for me.
I had no idea what was in that box when I opened it. I cried like an idiot when I opened it, I did. I get tears in my eyes even now just thinking about how I felt when I first saw that inside that special box was Seddy, my long lost friend. (And yet again now, I have tears in my eyes again now–as I edit this post. Good grief, but I love that bear. He’ll be the one hanging off my wheelchair when I’m an old lady.)
I named my bear Seddy before I could pronounce my T’s" “Seddy Bear.” I didn’t care much about baby dolls, or Barbie dolls. It was Seddy whom I pushed around in a baby carriage. It was Seddy whom I carted around to the grocery store. Seddy was the one I slept with every single night.
Seddy is over 50 years old, so he actually looks pretty good for being loved on for so long. (Seddy was given to my older sister by someone my Daddy worked with. My sister, as it turned out, liked dolls better than bears. So he was passed him down to my older brother. My brother couldn’t have cared less about him, so on down the line he came. To me. Yes, to me, where he belonged.)
Seddy used to have two ears. And two eyes. And a nose. Throughout the years, my Mom kept him together for me. Putting a stitch here or there. Using yarn for missing things.
Now here we are today. And it is no surprise that my daughter’s favorite is also a bear, a gift from my parents when she was a baby. My daughter gave her the name Sandra Lynn. Don’t ask me. 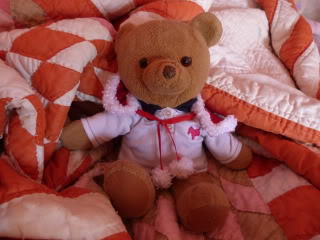 So many times my daughter has examined Seddy, with his missing ear, and missing eyes, and she gets sad. “Will Sandra Lynn ever look like that?”
The truthful answer is yes. Yes, Sandra Lynn will get exactly like that. Her fur has already become flat and matted. One of her eyes is chipped. Her snout smished. But I say to her, “Well, I don’t know. But I do know that I love Seddy. It doesn’t really matter what he looks like. And you’ll feel the same way about Sandra Lynn.”
I ADORE this picture of my daughter and Sandra Lynn that sits on a mantle. 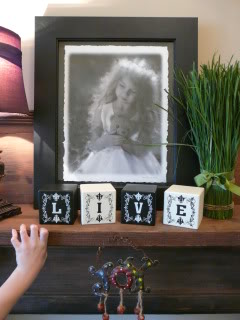 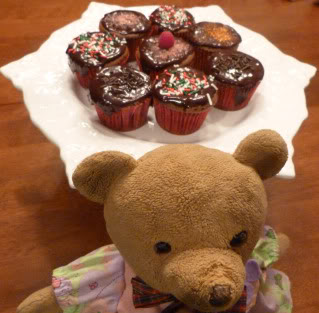 I used Ina Garten’s Chocolate Ganache Cupcake Recipe.
And let me just tell you. I took a bite of one of these babies and oh my! I called for a moment of silence right then and there.
They are that good.
You must. You must. You must. Holy moly, but you must. Dense rich chocolaty heaven.

That night, when my daughter’s eyes were getting heavy, and the Sand Man was beginning to do his thing, she called out to me, “Muzzie?” (that’s what she calls me).

I came in and she softly said, “Thanks for making such a big deal about Sandra Lynn’s birthday every year. It means a lot to me.”

“I know,” I said, “I like doing it. You’re very welcome.”
It’s no trouble really. Because I know about bears. I really, really know.
Do you have a special old friend? Human or otherwise? Won’t you take a minute and tell us about your old friend? We’d all love to hear!
Until next time, Friends, savor the flavor of life!
Lots of love, The City Farmgirl, Rebekah