Are you someone who can be trusted with secrets? I can. My lips are sealed tightly. My grandmother used to say, “Now, don’t you tell it…” (I hear her voice saying that now as I write it.) I learned not to. I did NOT tell it. Now that I think about it, it’s kinda funny that I blog because I’m actually a very private person. I think I feel safe because Farmgirls are such a sweet, supportive, loving group of women. Aren’t we!

But I don’t mind whispering my own secrets to you. My secret is one of the reasons I’ve been pulling out my hair the last six months.

Now that I’ve set it up like that, I realize this secret really isn’t a big deal. It sounds like I’m going to announce something super huge or incredibly dramatic. No, none of that.

This is my kitchen, the way it looked when I bought the house. Since then, we’ve added a den on through those double windows to the right of the refrigerator. Now, those windows are a walk thru to the new space. 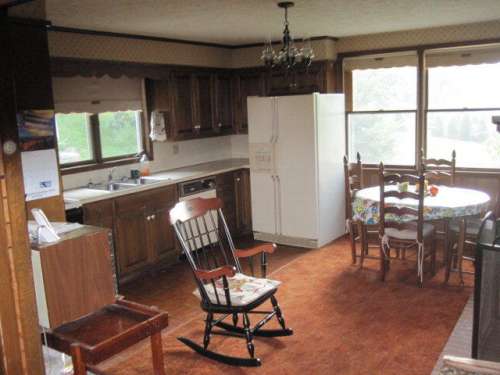 I wrote about building that new space in this post:

Well, we decided to do the same type of thing with the windows over the sink. Add some space and make it a walk-thru. Originally, last August or so, this space was designated as “storage” space, but now it has developed into a new kitchen. 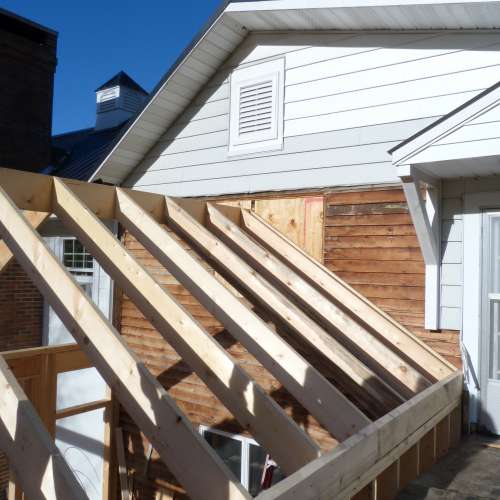 Here’s where we started framing it out. You can see through those rafters the kitchen window over the sink. Do you see all that lap siding? We found that under the vinyl siding, just like we did on the other side of the house. I’ll keep that just as it is in my new kitchen. Here’s a better view. Cool, huh? 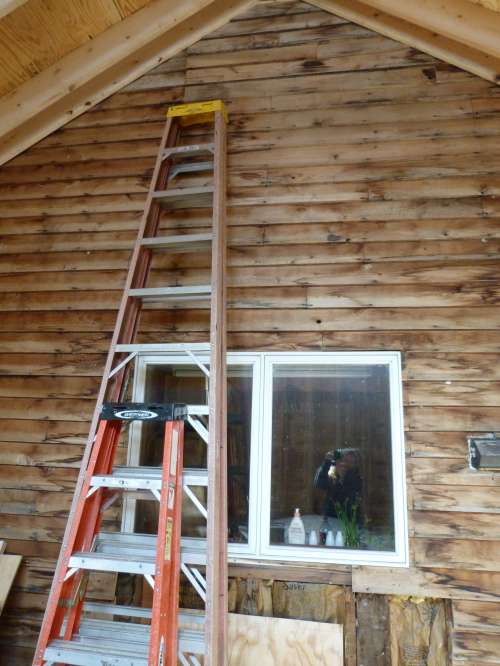 Opposite that will be the range wall. This is a new wall. 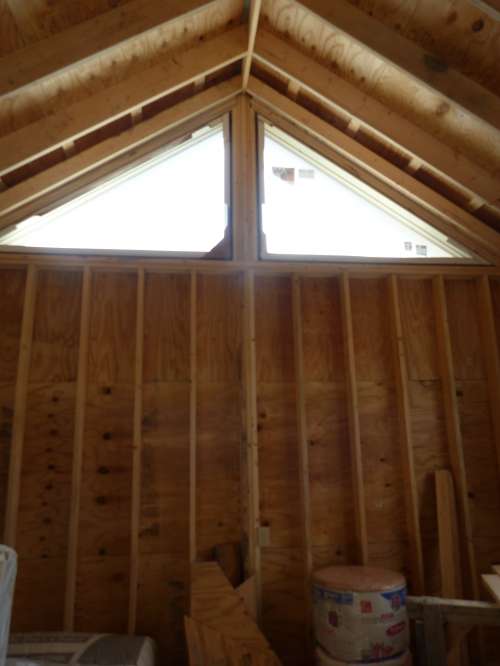 And this wall. Oh, how I LOVE this wall. Guess what will go under those windows? That antique farm sink I found! Isn’t that wall of windows dreamy? They are casements. 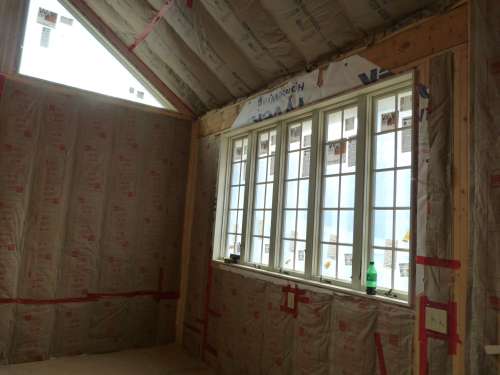 Okay, I’ll show off my farm sink again, but don’t think I’m bragging. Well, maybe just a little. This sink is a 1935 Kohler sink in its original pristine condition. It was in NY in a restaurant that closed in the 40s. Since then, it’s just been hanging out. Waiting on ME and my new kitchen. If you’ve ever dealt with old bathroom and kitchen tubs and sinks before, then you know that once you refinish them they have a limited lifespan. For a kitchen sink, where you are banging pots and pans against the enamel, most re-finishers tell you that you are lucky to get 10 years. (Tubs are different since usually only soft things, like feet and bums, touch their surface.) This one has never been refinished. It is original and I am SUPER LUCKY to have found it! 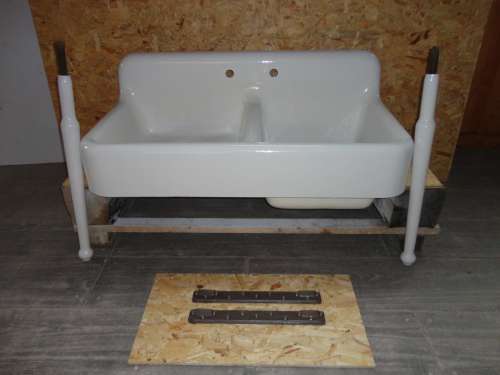 We are making progress every day. Surely by autumn, when the leaves are changing and I’m back to soup making and bread baking, my kitchen will be finished. Surely?

There was an amazing sell on the range I wanted months ago, so I went ahead and ordered it. I had this one exactly in a prior kitchen and loved this so much. The brand is Five Star and it is made in Tennessee. It is a fraction of the price of some of the high end names you know, like Viking and Wolf, so you get lots of bang for the buck. This is a work horse. I adore those brass accents too. I didn’t have those on my first Five Star. 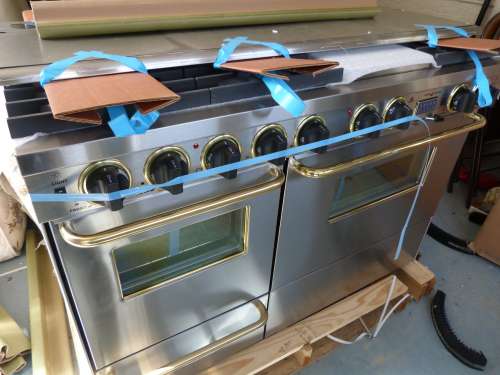 This is the kitchen where I previously had a Five Star like the one I ordered for my new kitchen. It was several houses ago. When we sold that house the woman buyer told me that she absolutely loved my kitchen and that stove. Then she said that she didn’t cook or bake, only eats out. So my new kitchen, my little secret in the works, is going to be KILLER. AWESOME. INCREDIBLE. I’ll need your help in decorating it. I stink at decorating!

Okay, so that’s a house secret. Now let me tell you another secret since I’m waaaaaaay down at the end of this post. My family doesn’t know this one. And they don’t read my blog anyway. We have a very sick chicken. She has had an impacted crop for months. Nothing I tried cleared it. I’m pretty sure she will die in the next day or two and I dread it. She will be the second hen who died this year. It’s one of those things that you read about and you KNOW it’s so, but you ignore it. Chickens don’t live a long life.

Wait. Let me share another animal secret with you. This one has a better ending. Sweet beginning, torture middle, but good ending. You know my mustached cat? The feral one that I rescued from a “trap and kill” animal control department? Well, I kept him confined for months and made no progress on taming him. He would not come out of hiding no matter how long I stayed in that room with him. Well, a couple of weeks ago he escaped. A pane of the window fell out…or was pushed out? Oh, how sad I was about that. I felt like a big fat failure in trying to save and rehabilitate him. Our Gracie had recently died, and we were all in a cat funk, so I didn’t tell anyone that he was gone. I was the one that always visited and fed him, so they’d never be the wiser. “How is mustached cat today?” Oh, fine, fine, fine, I’d say. When in fact I had no idea where he was. He was on the run. I kept out food and made him a way back into his room. The food has been eaten, but I didn’t know if it was mice or him. Until tonight. I just saw that little booger! He came up to the house. When I went outside, he ran away into the yard. I got a can of food and put it out for him. HipHipHooray! He’s okay! He’s safe and sound! And I’m fine with him being outside and hanging around our farm; I just wished we had made some progress on him becoming less wild.

Oh, how about another little secret? Except it’s not so much a secret as it is news. Do you remember the old sycamore tree by the creek at our farm? You probably don’t, but when we toured the farm the agent told us that baptisms used to take place in the mountain creek beside that ancient sycamore. I thought that was just about the most amazing thing I’d ever heard before about ANY property. They used the creek out in front of our house before the local church built an indoor baptismal font. Well this Sunday, there will be 10 baptisms in that creek! I couldn’t be more excited. This past weekend about a dozen guys showed up from the church and “weed-eated” or is it “weed-ATE” (?) the area. It took them no time at all. And when out tract-hoe guy was here working on that new addition, he offered to dig out a spot a little deeper just in case the water is down on baptism day. Nice, nice people around here. I want to go down and fancy it up that area some, but I’m not sure how. Maybe put out some special flowers before th1e service. Holy ground. I knew it when we bought this place loving sharing it. I’ll take photos, you know that! And my fingers are crossed for some old time hymn singing down there.

Okay, do you have little secret brewing? Go ahead, tell us. No one will overhear…your secret is safe with us. LOL!

Oh PS. I continue to receive requests to join the YOU Challenge. We did that for May, so it is currently over. It was wonderful! I tell you what. We’ll do it again soon, so gear up and we’ll walk for YOU/ME/US every day in the month of——hmmm, we need to pick a month to do it again. October? or should we wait until next May and do it annually? What do you think?