Summer is trying to come to an end here in Alaska, but the weather isn’t cooperating. I’m finding some conflicting feelings come with the unexpectedly warm and dry days.  We’ve enjoyed so much outside play with very little prep. The ability to get three kids outside without warm layers or rain gear is amazing!  It’s too dry for mosquitoes to hatch.  The lawn is growing super slowly so not as much upkeep on that front. Heat loving Alaskans have had a great time this summer. 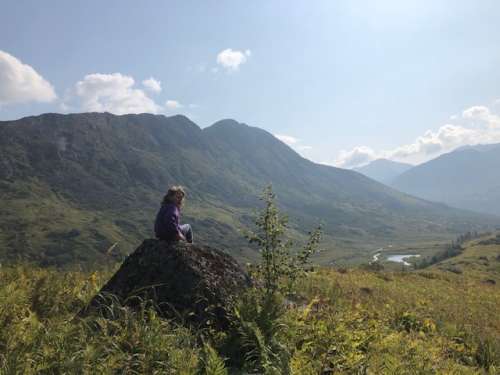 Opal on a not-so-smoky day berry picking in the mountains.

In an average year the highs should be in the sixties, and the rainfall is generally sparse but still enough to keep lawns and trees happy..but this summer–This summer! This summer has been off the charts in the wrong ways–super hot and super dry.

I’m having trouble finding actual numbers for the amount of rainfall we’ve had since summer solstice, but I’m pretty sure it’s only about 1/2 an inch! That is drastically different than the already low 6-7 inches that we typically get in that time. It rained the other day and many of us reacted the same way–What is that sound? Is something leaking? Oh! Oh, it’s rain!! There was much rejoicing at the rain, but it only lasted about fifteen minutes.  It also bypassed wildfire areas of the state which have been burning all summer.  It’s been crunchy and smoky around here for weeks.  However, (fingers crossed) we have good amounts of rain and overcast days in the forecast! 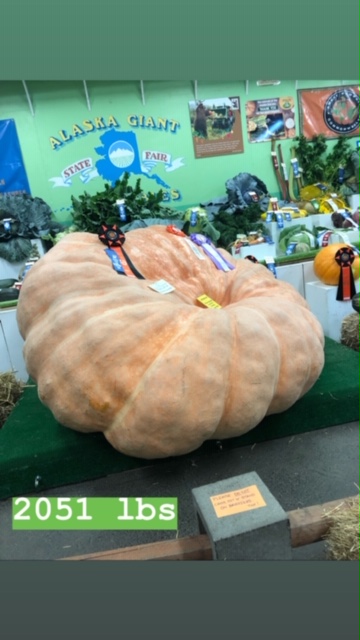 The average temperature has also been about six degrees higher than average.  That is scary to me as an environmentalist, but it has also proved to be an amazingly bountiful summer.  The bounty has come in many forms–especially food and fun! Thriving gardens and farms experienced big booms of heat loving crops that we aren’t used to here in Alaska.  I successfully grew tomatoes and peppers outside! That is almost unheard of around here unless you have a nice little microclimate somewhere, and then it is still hard.  Corn and winter squashes are bigger, more numerous and more robust than I’ve ever seen. 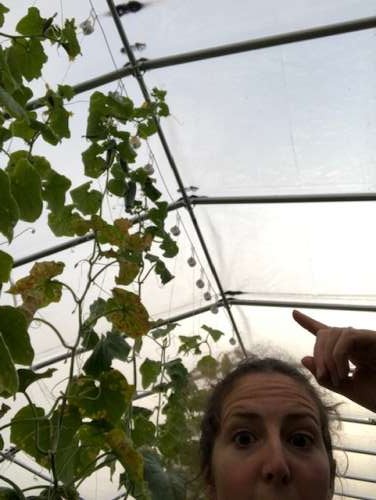 We also went swimming in lakes and rivers more than any other summer We’ve been up here.  Some days it was so hot that it felt like the only thing to do.  It felt almost like southern California a few times in there–hot, clear, rainless, “perfect” days–day after day after day. So, we played outside a lot, both big girls learned how to ride bikes, we enjoyed the sprinkler and I swam in some alpine lakes! It was a little exhausting, as we are used to squeezing every last drop of summer out of the few “hot” days we have. This summer they just keep coming! 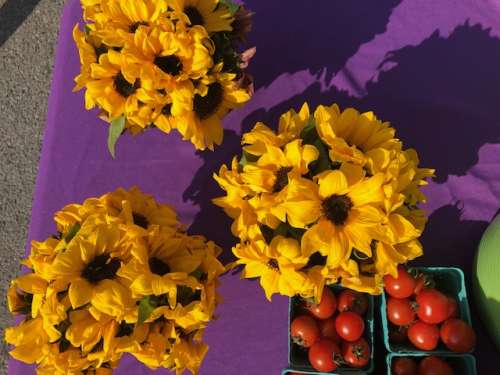 The most exciting bounty we benefited from over the last few weeks was blueberry picking!  We went out a handful of times and picked a couple gallons of fresh wild blueberries–high bush and low bush, some tiny and some big and juicy.  We’ve made coffee cake, muffins and plenty of bowls of oatmeal, and I have jam on the docket if I can get it made before the little guys are eaten up! 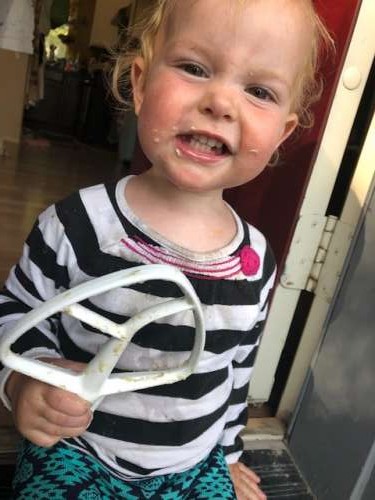 The best part of baked goods–cleaning the bowl and spoons!

The hot drought highlights some of the conflicts one can see with a changing climate.  Sure, it’s great to have a nice, hot sunny summer for those water sports, hot nights outside, tomatoes and flower blooms (the fields of fireweed were incredible this year–truly purple mountains because of the blooms).  However, the cost is catastrophic.  We have fires burning all over Alaska and the glaciers and ice shelves are melting at unprecedented rates.  Living rurally has its perks–we have largely unfettered access to our own fields of foragables, but we also live where fire isn’t going to be managed to the same extent it is managed near a large city.  There just isn’t as much to protect in terms of homes and businesses.  Plus, the fires should burn.  They are a necessary part of this environment that has been decimated by spruce bark beetles.  However, the dry, windy conditions are fostering pretty scary fires and many rural families’ homes and buildings have been lost. The fire crews look exhausted. 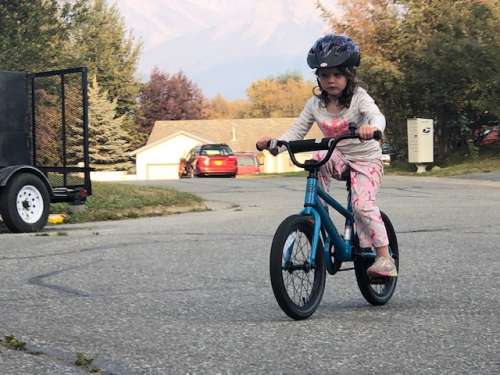 Learning to bike on a smoky day. Three years old and no training wheels!

We have also seen some plant diseases and pests persist more than they have in the past.  The spruce beetle continues to ravage spruce, birch trees have a leaf borer that is causing their leaves to prematurely brown and fall, defoliating caterpillars have been spotted the farther north than ever before. Cold loving crops were not very happy this summer, either.  I have a freezer full of unmarketable broccoli to prove it! 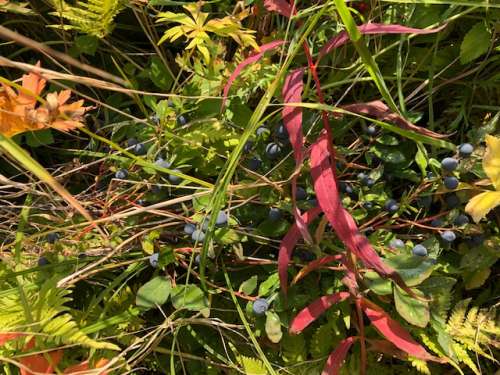 The prolific flower blooms, berry harvests and veggie and fruit crops are super awesome for us right now.  However, my botanist/horticulturalist/science brain is curious–it seems like these plant expressions are a great display of stress.  Plants are known to produce more flowers to become seeds when they are stressed.  They say to themselves, We are dying! Reproduce! Reproduce! Our species depends on it! While this might be apparent to the gardeners and other dirt workers among us, it isn’t apparent to the general population.  They can see these bounties as a display of healthy plants. So, while I’m cautiously enjoying the goods this year has provided, I’m curious and a bit nervous for the summers to come. 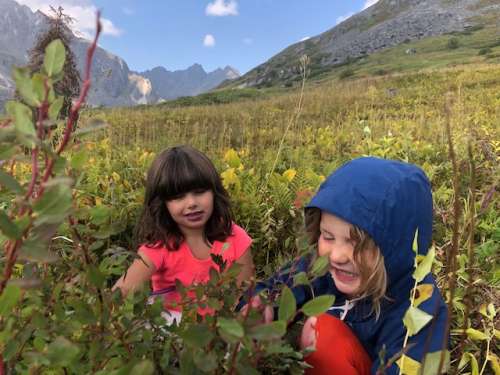 For now, we will enjoy our easy access to beautiful blueberry patches.

We are all questioning whether this will be the new normal or if it was a fluke, but it does feel like it was a strange summer the world over…and while the waiting to see if we sink or swim is kind of terrifying, we are going to relish in the bounty that nature provides even in stressful times. AND we are going to continue to improve our lifestyle so that it is more in tune with the natural world, encouraging others to do the same. 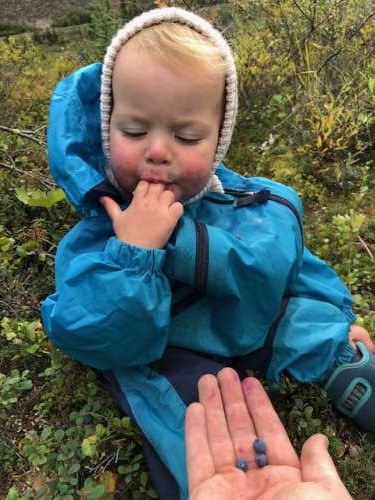 I’ve long been intrigued by juxtaposition and conflicting outcomes from singular events.  Do we always need “winners” and “losers”? Probably not, but this summer make sit feel like we are on a precipice we might not be able to come back from.  If this is the new normal, how can we make losing a much less likely outcome?  I hope I don’t sound like a total downer, but these are real questions to grapple with! While I eat blueberry scones, of course.

Have you noticed shifting weather in your corner of the world?  How are your gardens and environments responding?  I’m truly curious to hear first hand accounts!

Hope September is a good one for you all!

Sending Peace and Love (and rain dances) from Alaska,