Farmgirl Roadtrip: Out of This World! 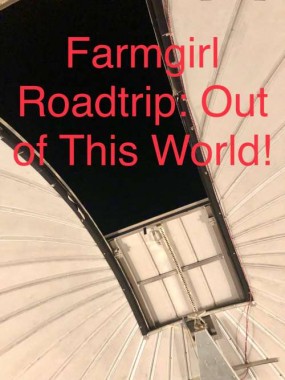 What crazy weather we’ve seen all over the country! I hope this finds you safe, enjoying clear skies. After buckets of rain and unseasonably cool temperatures, it’s finally summer here in New England, and those clear skies meant we could visit a very special place. (It’s been awhile since I’ve posted a “Farmgirl Road Trip”).  Not far from my hometown, there’s a place to visit completely created and run by volunteers. This very special place in New Milford, Connecticut is for all ages and is truly out of this world! 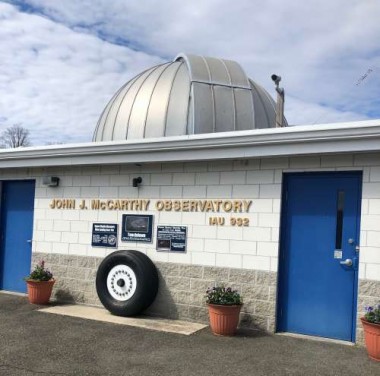 While I appreciate the stars and planets, I’ve never thought of myself as a huge “space” enthusiast. My interests are more earthbound, but after visiting the John J. McCarthy Observatory, I find myself looking up! Even if you’re not a big space fan (I certainly am now), the Observatory and its surrounding grounds are breathtaking, and the experience and how much one learns there is mind-blowing.  It’s a must-see! 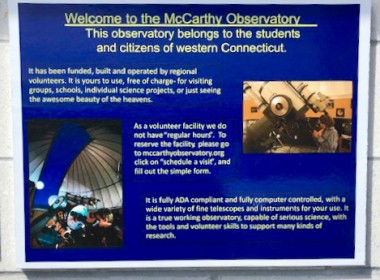 The idea of the observatory came in 1998 from a pilot, along with a few others. What started as an unfunded idea with no plans, after over two years of planning and approvals, in five months, an amazing facility was designed and built with donations and hard work from volunteers. ADA-compliant and with completely free admission, the John J. Observatory is located on the New Milford high school campus. 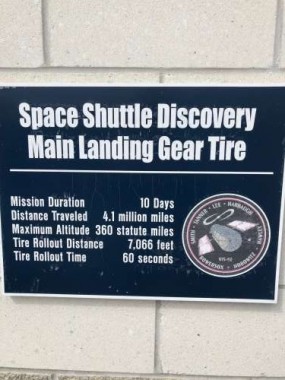 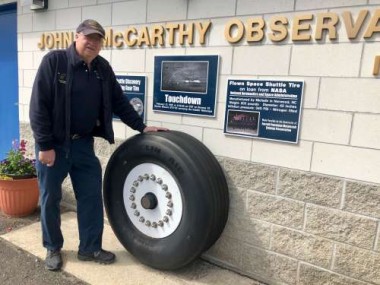 Robert Lambert is a joy to meet. A wealth of knowledge with a huge heart of gold, he is one of the original founders of the The John J. McCarthy Observatory, and an incredible host! Bob treated me, along with my daughter’s Girl Scout troop, to a private tour and star-viewing. What a memorable experience! 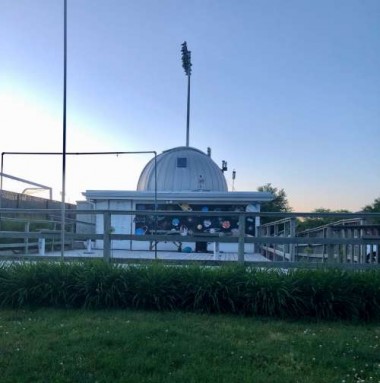 The Observatory consists of a main observation deck housed inside a large dome. The facility holds five telescopes, all with special purposes. 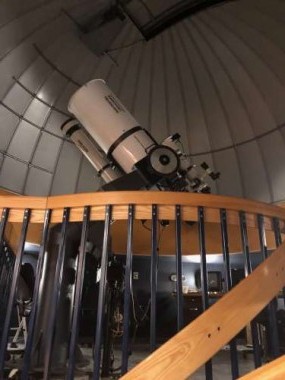 The main telescope is a 16” reflecting telescope, the rest are refractors. The dome opens and moves along with the massive telescope automatically, like a fine symphony in motion, to reveal the sky and the surprises one sees above. 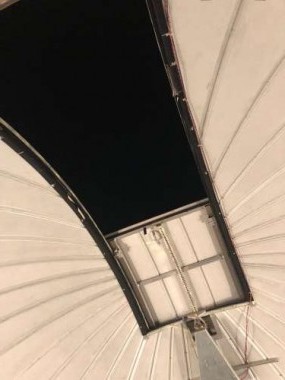 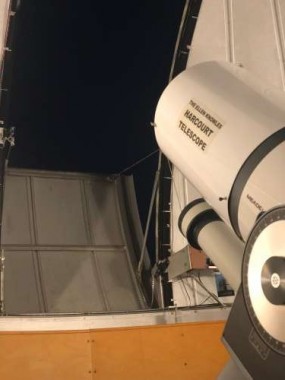 Everything is controlled and run by a main computer, affectionately called “Spock” with a monitor named “Sulu.” 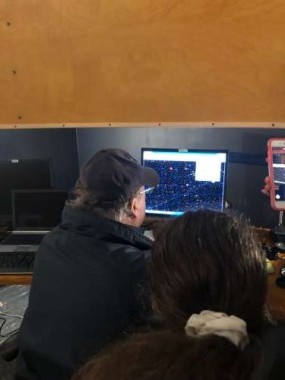 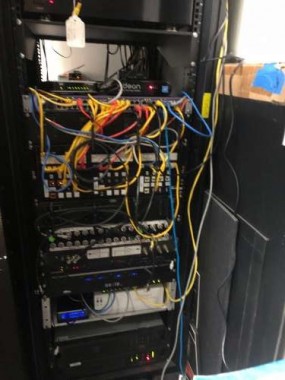 Avoidance of lightning strikes is a must, so a special circuit isolates the high-tech equipment. The central vac battles one of the telescope’s two worst enemies: dust (the other is vibration). 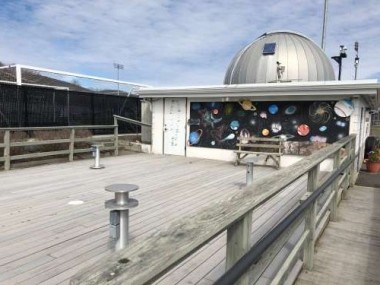 The facility also boasts an outdoor observation deck, a control room with five monitors (carrying names like “Data” and “Warp”). 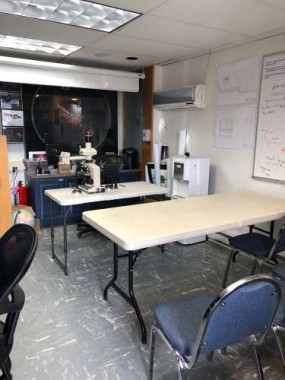 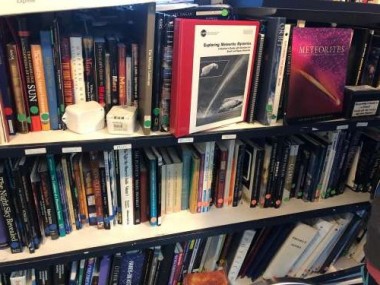 There’s also a lending library in the control room/classroom, where visitors can check books out. Bob says it’s hard to keep up on astronomy these days. Staying current is the number one challenge. The fast rate of change these days is due to huge telescopes on earth and in space. (The rate of discovery is “skyrocketing”)! Bob says, “Science is simply uncovering nature’s secrets.” He adds, “They are revealed one at a time with difficulty or good fortune. There may be an infinite number of them.”

While waiting for it to get dark, a peek at Galileo’s Garden, adjacent to the outdoor observation deck, is a must see. The main garden consists of plants found at the University of Padua, in Italy, where the Father of Modern Astronomy, Galileo, was appointed Professor of Mathematics in 1592. Maintained by volunteers, including a few Master Gardeners, the carefully planned garden is relatable even to small fry, as they can see “Snow White and the Seven Dwarves” (seven dwarf lilac bushes (syringa) and an Iberis sempervirens ‘Alexander’s White’ Candytuft. I’m  inspired to add Leucanthemum superbum, Crazy Daisy Shasta daisies, to my flower bed after seeing them in Galileo’s Garden! 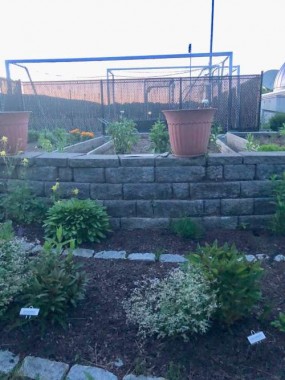 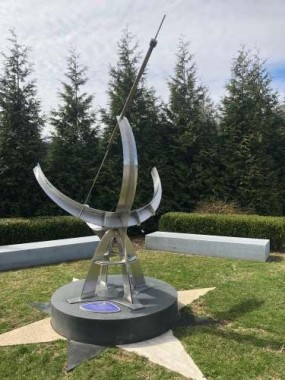 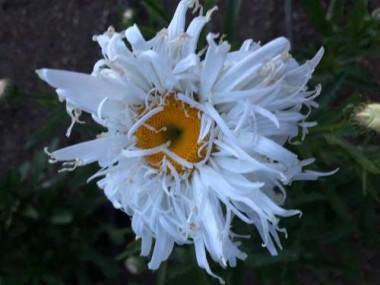 The nine-foot tall, five-foot diameter sundial has a precise bronze replica of Galileo’s first telescope. As with everything at the facility, it is exact, with an accuracy within 5 seconds. The sundial is dedicated in memory of a beloved 6th grade teacher, Kathleen Fischer, who was a member and motivator for the Observatory. Bob says that the sundial is “an inspiring symbol of how one person can change the world”. 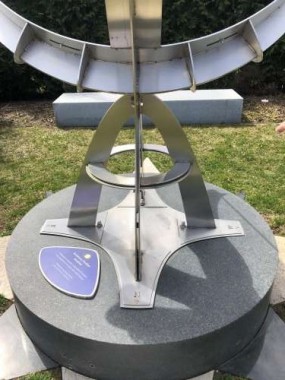 The granite benches surrounding this part of the outdoor area came from the same lab that made the Hubble telescope. In 1929, Edwin Hubble discovered that there’s other galaxies other than the Milky Way.  Until his work, it was believed that the Milky Way was the whole universe. (Now I’m wanting chocolate…) 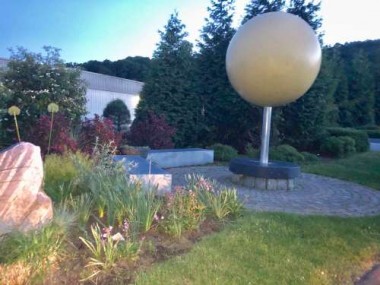 Nearby, a granite model illustrates our galaxy’s black hole. Like a rings on a tree, the black hole gets bigger, (no doubt from all our lost socks). 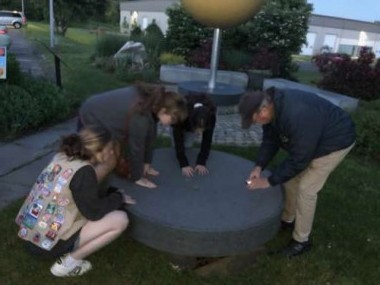 Checking out the Black Hole 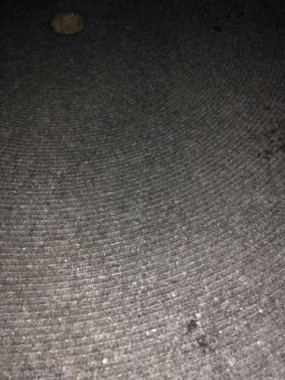 There is a replica sun, exactly six feet in diameter – the center of the Observatory’s “True Scale Solar System”, scattered across twelve different locations across the town. When you see how large the sun is compared to other planets (and how far away they are), it’s positively mind-blowing! 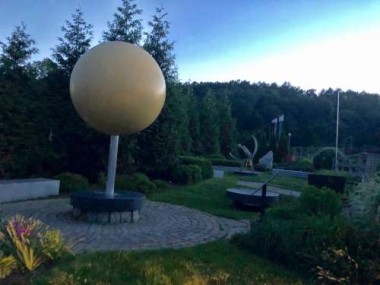 The gigantic yellow sun is a focal point in the outdoor area. 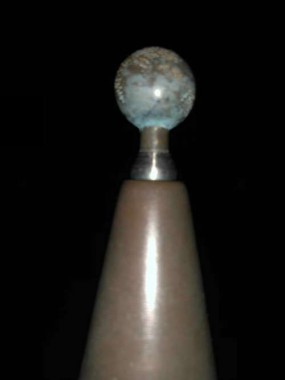 The detail on the replica earth is spot on. 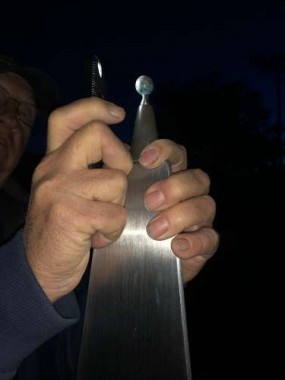 Bob uses his phone for perspective to illustrate how tiny Earh is compared to the sun. 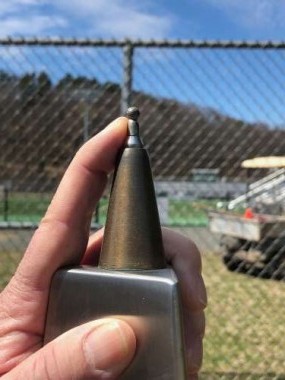 Did you know that you can see the International Space station go by overhead? We were thrilled when Bob had us line up on the curb outside and look skyward. None of us guessed what we were looking for. Sure enough, a very bright, small object flew across the sky of our location a few minutes past 9:00. One can tell the Space Station from an airplane because it doesn’t blink – the light, from reflection of the solar panels, is solid. With six people on board, the space station is 360 miles up, opposed to the average airplane of 35,000 feet! 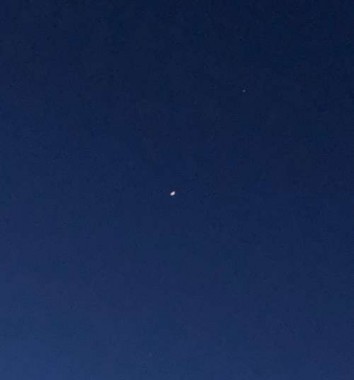 Helllooo up there! The space station flies overhead.

Once darkness fell, we were treated to viewing the stars through the eye of the telescope. Seeing stars in the sky is one thing, but through a high-powered technological wonder, it is certainly something to behold. Hearing and seeing the dome open and looking at space and her beauties was something we will never forget. 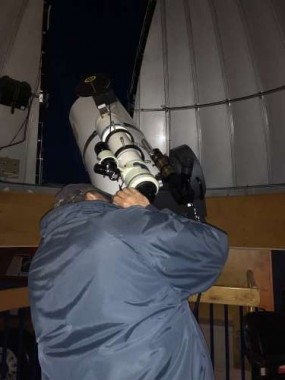 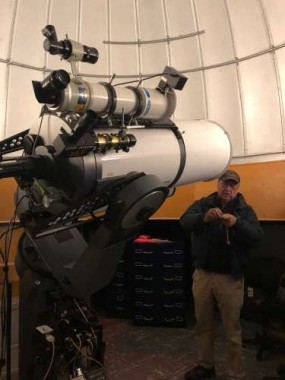 Lastly, we took a peek at their collection of meteorites from all over the world, including the first-ever recorded meteorite to hit earth – from 1492! 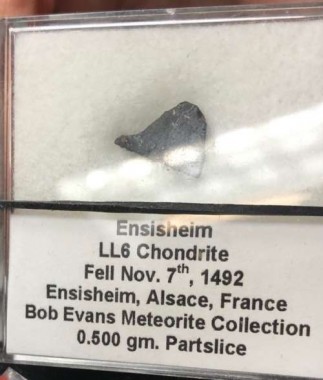 The stars were prettier than diamonds, and trying to put into perspective the vastness of space is hard to wrap the mind around.  It certainly makes you appreciate our planet, her natural beauty, and how small we really are. 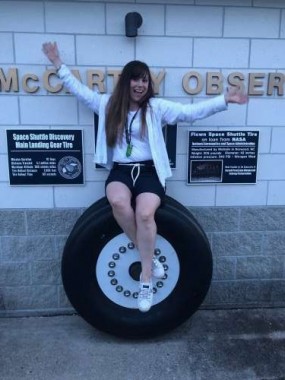 To learn more or to book a visit, click Here.

Visit with me again, with the next Suburban Farmgirl post out July 16th!