All Wind Comes to an End

Notice that the stiffest tree is most easily cracked, while the bamboo or willow survives by bending with the wind. ~Bruce Lee

Whew! What a month!  The second half of January and first half of February have been a doozy for the Wilders.  We (well…I) have been sick for the last three weeks.  Ugh.  It is finally passing and I’ve been going out into the non-grocery store and healthcare appointments world.  I am fairly certain we had one of the influenzas tear through our home (fevers, body aches, general delirium, inability to move for more than ten minutes, loss of appetite, nose and chest crud, etc.); and I’ve had a lingering, exhausting cough that has been driving me bonkers! I’ve had the cough for going on three weeks, but it is much improved and doesn’t leave me exhausted by noon anymore.  Ava estimated that it would be over in six days.  I have a feeling her intuitive diagnosis is very close to reality!  There is a light at the end of the tunnel! 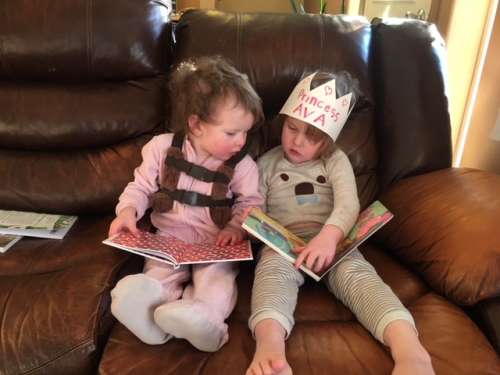 Sick mama means lots of pajama days and books for the girls.

I’ve been comparing the cough to the end of pregnancy–it may feel like it will never end, but it will.  It must.  Just as with the good, all bad things must come to an end–Thank Goodness!

So what does my hacking have to do with wind, you may ask?  Over the first two weeks of our crud, “The Valley” (which is what this part of Alaska is lovingly referred to) experienced a seemingly never ending wind storm.  Winds at night gusted to 50, 60, 70 or more miles per hour all night every night.  Day time (I accidentally wrote “wind time,” LOL) gusts routinely reached 30 to 40 miles per hour–all day, every day.  Our back yard actually isn’t too bad so a lot of the snow stays, but tons of dust blows in, creating an eery moonscape of desolation and despair.  I’m not sure how the physics of wind work, but I do know that our neighborhood’s snow tends to collect on our driveway and front walkway.  Hardening into cement-like, gray snow drifts as it settles. I wish I had photos of it all…alas, it didn’t even occur to me to document. 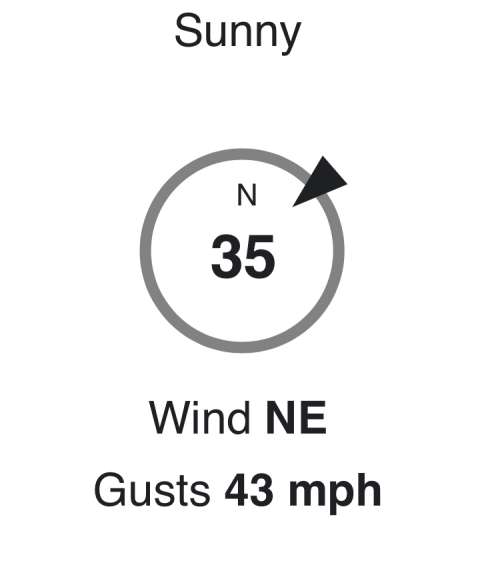 Screen shot of mid-day wind, six days into the wind storm. At least it was sunny?

I watched trash cans get casually tossed down our street on garbage day.  Opal learned the word “wind” and can make a very convincing howling wind sound after her immersion experience. One of my good friends had her diaper bag tossed thirty feet away in a parking lot while the wind threatened to topple over her cart with her six month old daughter perched inside.  Trampolines and basketball hoops all over the valley will never be enjoyed again as they lounge–mangled–in bushes and on fences.  All of the bird seed from our feeders kept getting blown out in less than 24 hours, but I don’t think the birds were braving the exposed feeders anyway. It was apparent that people, pets and wildlife decided to give up after a few days. 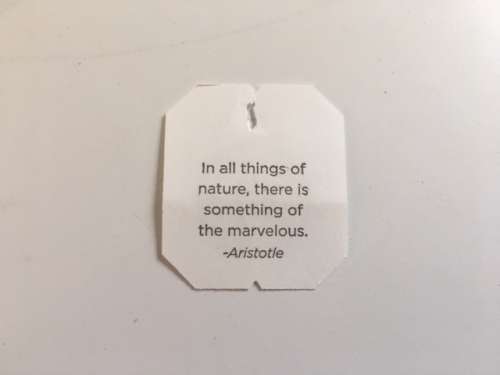 A good reminder from my Cold Care tea bag.

One of my friends, ever the optimist, reminded me that the wind is what helps make our part of Alaska so fertile.  We get so windy because we live where two glacial valleys join–one from the southeast and one from the northeast.  The wind roars from the cold air of the glaciers toward the warmer air of the nearby ocean water.  Coincidentally, the wind brings with it mineral rich deposits of glacial loess.  This soil sediment makes our soil very fertile, soft and loamy–great for growing huge, sweet, delicious veggies!  I must admit, however, that it is hard to keep this in mind while in the midst of a wind storm. 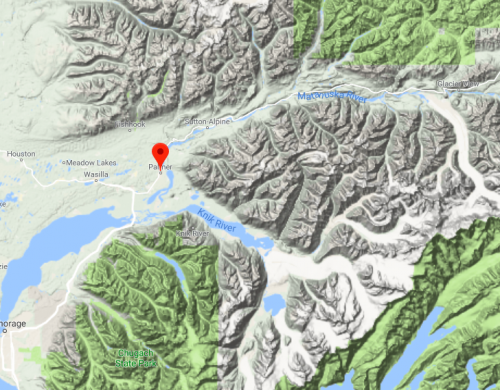 The Matanuska and Knik glaciers are at the eastern ends of their respective rivers. “The Valley” is where they meet–Palmer, Wasilla, etc. The Cook Inlet (inlet off the Pacific) is on the left side of the picture.

Yet again, just as with the good, all bad things must come to an end.  One morning we woke up to an eery, still silence.  The trees stood tall and resilient, bare of any remaining trace of snow or leaves.  Birds peaked out, cautiously. People styled their hair again. Kids were on bikes, even though it is February in Alaska. Eye contact was made in parking lots.  We made it through without blowing away. 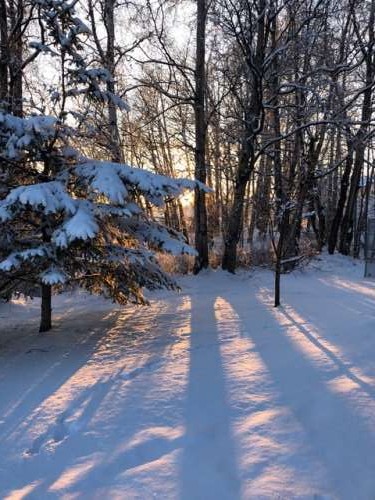 It is so beautiful when the snow sticks around and doesn’t get blown away! Photo by Evan Wilder

My aunt heard at some point that continuous wind is harder for women to cope with than men.  She revealed that women during the dust bowl “especially went nuts”!  And that the wind messes with the ionization in the air, leaving too many positive ions in the air.  I decided to look deeper into this phenomenon…

It turns out I didn’t find too much, but there was an intriguing 1981 article from the New York Times.  It touches on how molecules of neutral elements can get an electron knocked off the through various means (wind being a possibility), leaving a positive ion because electrons are negatively charged.  Then the free electron attaches onto another molecule, making it a negative ion.  Apparently it is the free floating positive ions that are the problem.  An NYU study from that time shared: “The apparent effects of positive ions included increased tension and irritability as well as a slowing of reaction times.”  Some studies revealed higher incidences of crime, illness and accidents during wind storms.  Other studies have debunked all of this, but it is intriguing nonetheless.  I saw no mention of women being effected by this more than men, but I believe that–in general–women are more in tune with the link between physical and mental health; so it kind of makes sense.

While this argument is compelling, I think the wind causes emotional distress because it is so disruptive.  It is harder to sleep through the howling at night, particles and pollutants blow in the air and contribute to weeks of coughing fits and illness, dust creeps its way onto window sills necessitating more cleaning than usual, cabin fever becomes super real as time outdoors is limited.  More indoor time means more germs circulating and more interaction with people we might not want to interact with!

Luckily, the wind has been over for more than a week now, and we can hardly remember it! It is amazing how quickly we can move on from inconsequential yet aggravating things.  I’m hoping I feel the same about this cough by this time next week!  As I approach the end of this pregnancy (not that pregnancy is a “bad” thing), and my waddling becomes more pronounced, I’ll have to remind myself of the same thing.  All things come to an end. 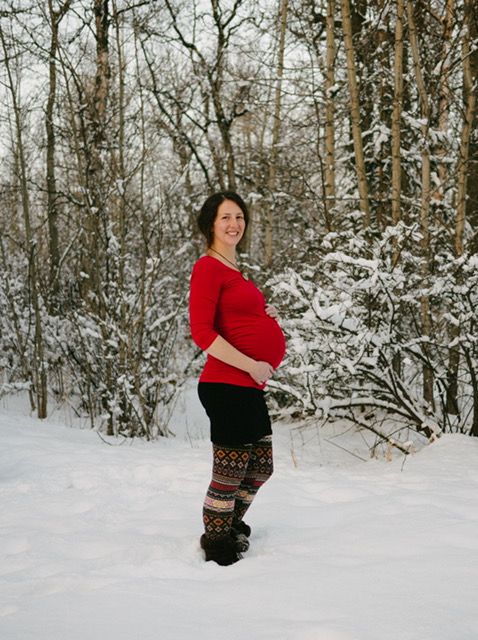 My first real maternity photo for this pregnancy.  Baby Wilder continues to thrive despite wind and illness and coughing fits.  Miraculous!

So, we might have a new member in our family come my next blog post…but I’m not banking on it!  My labors tend to follow in my footsteps–late enough to wonder if we’re going to make an appearance, but sure enough we show up.  I guess it’s payback for being a chronic procrastinator and late arriver.

How are you all doing as we approach the equinox?  I hope this finds you well and happy–planning garden beds, starting seedlings, finishing up winter projects and all of the other hubbub that comes with the end of winter.