[Previous Rural Farmgirl, April 2009 – May 2010]
Chores
Why is getting to the post office such a chore? I hate it. I would rather do almost any other chore then go to the post office. I would rather do the dishes, mop the floor, and even scrub the toilets before making my way to that building. The one thing that I miss the most about working in a downtown office is being able to put the envelope in the outgoing mail bin and knowing it would magically leave. Poof, gone. I loved that!
It isn’t that I don’t like the people there—I do. We have the nicest folks that work in our local post office. They are fun, funny, and witty. And I always seem to run into someone from the community that I haven’t seen in awhile and have a lovely conversation that enriches my day. The building itself is quite lovely and historical, too. I rarely have to wait in line for too long. So what is the deal? 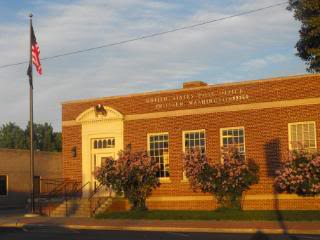 I would like to say that this is a new phenomenon to me, but it really isn’t. As a teenager I would leave un-mailed letters lying around, and it would frustrate my mom to her wit’s end. I can still hear her asking, “Why take the time to write them, if you aren’t going to mail them?”
In my defense, I never thought I wouldn’t mail them, I just simply didn’t. While I probably should have taken the time back then to delve into the mystery of it all, at 46 I am doubtful that I will spend a lot of time worrying about the “whys” of it now—I am okay with the fact that “it just is.”
I have often joked that email was created just for me. While I know friends and loved ones that have a disdain for emails, I love them. You can write your feelings down and push send…poof, gone! Although, there has been more than one occasion when I wish that I could get that sent email back. The scene from the TV show “The New Adventures of Old Christine” when Julia Louis Dryfus’ character accidentally pushes send and then tries to unplug the computer to stop the message from going through is forever etched in my mind.
I realize that my avoidance of the post office is a bit ironic, since I love hand-written letters. I love writing them. I love making homemade cards, and I love hand delivering them. I love connecting with other people, and to my knowledge nothing tragic ever happened to me at the hand of the local post office. So people should know that when I offer to snail mail something to them, it is the greatest act of love that I can muster.
I, too, think it is odd that I have such an issue going to the post office, since there really isn’t any better example of community. It’s a Rockwell painting in action. But as you are discovering, things in my world don’t always make sense, and the older that I get, the more okay with all of that I tend to be. I am a little worried, however, that the older I get the more like the cartoon character Maxine I become, which may be a good reason for me to not go out in public all that often.
But there you have it, my least favorite chore. It leads me to wonder what your least favorite chore might be.