I’ll admit it. I’m one proud mama!  If you’re a parent, you know your heart no longer belongs to you. Parents’ hearts swell from the very minute our babies are born.  As we witness their lives, we applaud their every accomplishment.  I’m my daughter’s biggest fan.  Beautiful inside and out, she’s intelligent, sweet, creative, and outgoing. She amazes me with her musical ability, especially since my husband and I are both tone deaf!  But my favorite trait about my daughter is how kindhearted she is. Recently, she did something that made me so proud, I thought I’d burst! 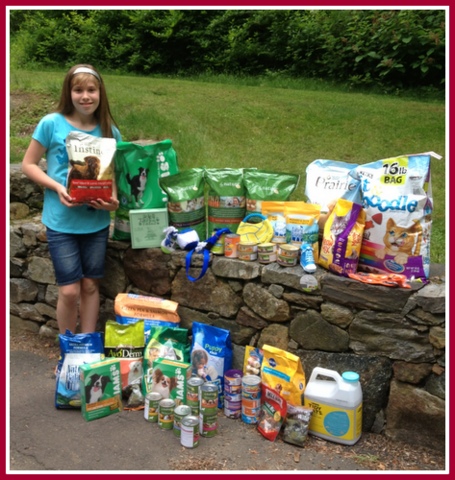 Audrey is a real blessing, and I thank God everyday for her.  When I was expecting, we had complications and were told she had a fifty/fifty chance of survival.  Strong and healthy, she’s my daily reminder that miracles do happen. My daughter has such a big heart, and a huge love of animals. Since she was a tot, she’s said she wants to be a vet and open a shelter for homeless pets.  I have no doubt she’ll someday accomplish those dreams, because when Audrey makes decisions, there’s no stopping her. (That gene didn’t come from me; I can’t even order food without changing my mind a hundred times before the server gets to the table!)

I have two friends residing in Oklahoma.  One friend is from high school. Another, Shelly, is a fellow dog-lover who I met by chance playing a word game on my phone.  After several months of playing the Scrabble-like game, we ended up chatting, eventually becoming friends on Facebook. When the news reported the devastating tornadoes that rocked through Oklahoma, my first thought was to check on my Oklahoma friends.  Both were well, thankfully.  On Shelly’s Facebook page were many posts of dogs and cats that were missing, or had been found and were missing their families.  We watched with lumps in our throats as we viewed videos of folks who’d lost everything, but were overjoyed to find their pup or kitty among the rubble.  Shelly posted pictures of sweet animals that pet-parents were so desperate to find.  It broke our hearts. Our pets are true members of our family, and we’d be heartbroken to have one missing. Audrey was inspired and determined to help. She also wanted to “give back”, after so many from all over the world helped our town after the December 14th tragedy.  Her love for dogs also intensified this year with the presence of the amazing therapy dogs that graced our school’s halls

“Mama, we have to do something!  Everyone helped us when we needed it, and now we need to be there.”  Audrey realized that with many people’s homes and belongings completely wiped out, even if they found their pets, they’d need leashes and supplies for their fur-babies.  She decided to start a pet supplies drive for the people and their animals hit by the tornadoes.  She named her effort “Audrey’s Furry Friends”.  Audrey designed a flyer, explaining what she was setting out to do, and assembled drop boxes.

I’ve never organized something like that before, and frankly wasn’t sure where to start. I didn’t want to tell Audrey no, but feared even if we did start a drive, getting the supplies down to Oklahoma would be difficult. Shipping would be impossibly expensive, and we could not drive down ourselves. To assist, I made many phone calls, hitting several dead ends.  Just when I was about to give up, I searched “Connecticut Truck to Oklahoma” on Google, and amazingly, up came info on a fundraiser by that name! Two women organized a drive to fill up an eighteen wheeler with supplies, to be driven by an Ohio gentleman donating his time and truck, leaving the third week of June.

We emailed Audrey’s flyer out, and drop boxes were set up at a local pet food store and our town’s Parks and Recreation office. The local paper did a story on Audrey’s efforts, and friends called or stopped by with supplies.  Strangers stopped us when we were out, applauding Audrey’s efforts, and her request was bounced about on Facebook. 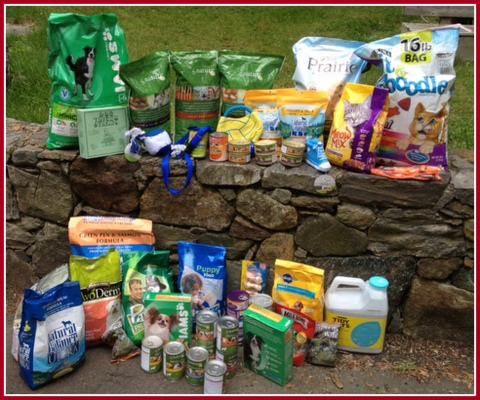 When the two weeks were up, we’d collected a trunk-full of food, leashes, cat litter, toys, and treats. 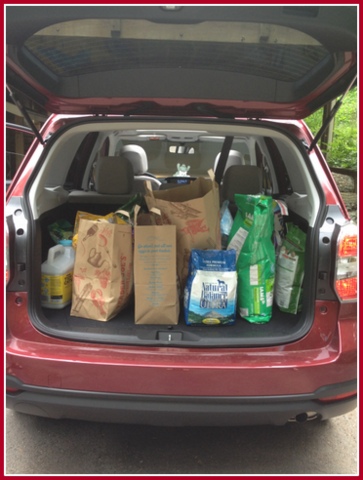 On Father’s day, we loaded up the car and drove up to Colchester, Connecticut, to drop off what we collected to Melissa, one of the ladies organizing the drive to Oklahoma.

It’s amazing how fate plays a hand; how a random video game on a phone could spark a friendship, and then inspire a little girl to help others. After a horrific event, my daughter learned a valuable lesson of love, of how helping others makes a difference.  She amazed me in her efforts, at only ten years old.  At ten, I wasn’t that wise!  Audrey did not create “Audrey’s Furry Friends” for recognition, a Girl Scout badge or some other award, but purely out of selflessness, love and concern.  She’s made me so very, very proud.