It happened again. After Hurricane Irene, we thought we wouldn’t see another major storm in the Northeast for a long time. Then the forecast showed Sandy, calling it names like “Frankenstorm”, “Storm of the Century” and “The Perfect Storm”.   After the damage we suffered a year ago at Irene’s hands, I thought we’d be safe and better prepared.  After all, we made it through 2011 with Irene and Winter Storm Alfred, and the major ice storms and blizzards of 2010.  Who knew Mother Nature could show such wrath to the tri-state area with Sandy!  The Suburban Farmgirl and her family are thanking their lucky horseshoes for surviving such a close call! 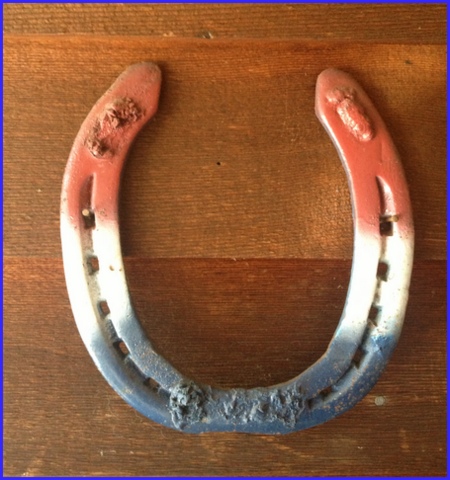 Our house is surrounded by woods on three sides.  In Connecticut, where there’s big trees, they’re BIG TREES, towering overhead like menacing giants.  In hurricane Irene, we had several huge trees snap and twist like toothpicks, so we felt  this time around, we’d be okay, that the weakest ones had already fallen.

Farmgirls are like Girl Scouts:  we’re prepared!  I baked lasagna, Greek-style macaroni and cheese (delicious cold),  washed and cut up fresh veggies and fruit, and filled as many containers as possible with water.  We stocked up on toilet paper, cold cuts, and other groceries, and put away anything outdoors that was out including plants and furniture. We made sure we had plenty of gas for the generator, got candles ready, and put all our flashlights and batteries in a basket.  We took the mattress from the guest room down to the basement, making a cozy bed with hand embroidered pillowcases and a comfy quilt.  We set up games and books. All our pets  moved down to our “bunker”: dog, three cats, two fish and four hermit crabs. Our animals all acted strangely days before the hurricane hit; Bonnie ate her usual bowl of dog food in the morning – only to continue tossing the empty bowl at me wanting refills, until I finally cut her off, fearing she might pop. (Several friends told me their fur-babies were doing the same thing).  I packed a suitcase, in case of evacuation.  I made sure all the laundry was washed, and the house was clean and neat.  It’s easier and more efficient to find your way around in the dark without clutter, and we’d have plenty of clean clothes to last should we find ourselves without the ability to do washing for a long stretch of time. 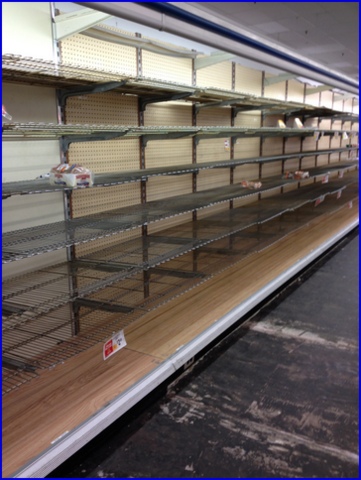 I took this photo at our local grocer’s the afternoon before Sandy hit.  This is the bread aisle, usually stocked to the hilt.

When Sandy started, it seemed more like a big Nor’easter than the monster promised on the news.   We were able to warm up some lasagna and eat a nice dinner before finally losing power around seven pm, and heading downstairs.  By nine, though, it was sounding ugly.  By eleven, we were scared to death, and the three of us and the dog  all huddled together.  We heard a loud crash to our right.  A few moments later, we heard an even louder crash to our left, and our mattress literally lifted off the ground.  The storm seemed to last a lifetime, and the powerful, angry wind was like nothing I’ve ever heard.  As I lay there in the dark clutching my daughter in my arms and praying,  I tried not to think  the worst, but feared it could happen.

When daylight and calm finally came, we emerged from our cocoon.  Our hearts stopped as we realized how grateful we should be for the very close call we experienced… mere inches away from major destruction of our home and property.

Two giant  trees fell between the propane tank and the stone wall bordering the driveway, missing the house by inches.  If it had fallen a smidgen more left, it would have destroyed our deck, our dining room, both cars,and scariest, could have affected where we were, possibly injuring us. It just missed my husband’s car,  hitting the stone wall (there’s no damage, amazingly), and grazing but not hurting the little wooden bench. 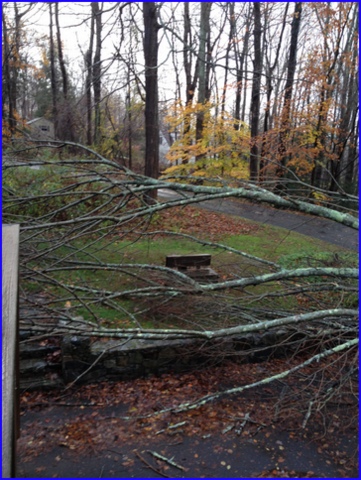 The damage to the stone wall was minimal…just a few stones to be repaired in the spring. 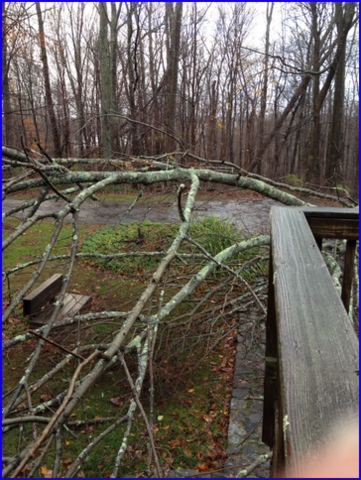 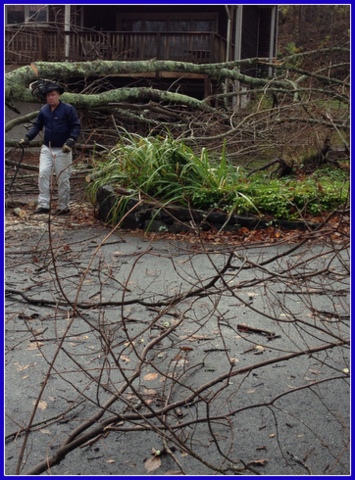 My hubby looks so small compared to the tree…and he’s 6’3!  Here he’s lamenting the chainsaw stuck while cutting us a path out to the driveway.

The crash we’d heard to the right was another felled tree, landing between the shed and trailer cart, narrowly missing the shed by less than an inch. It missed the pool and my daughter’s swing set.  It’s so big and heavy, there’s a crater in the earth where it lays.  We’ll be kept in firewood forever!  My brother, upon seeing the photos, said it looked “as if God himself laid those trees down”, and everyone is astonished at how lucky we were!  The only damage suffered was my new  compost bin, a $30 investment, now  flat as a pancake, and an inch-thick piece of deck railing shaved off by the tree. 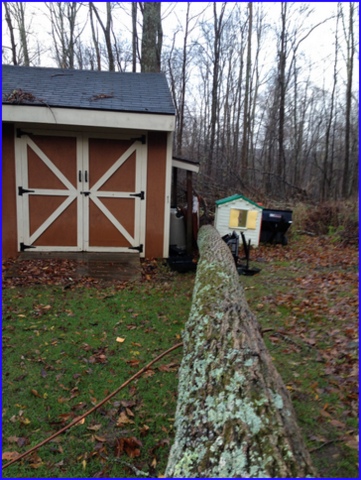 How close this big guy came to our shed!  Can you believe it? RIP, compost bin. How lucky were we? 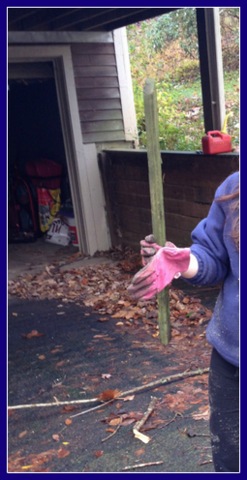 This is the only piece of the deck damaged – just a sliver off the railing. The massive tree, had it fallen a few inches left, could have destroyed my home and possibly injured us.

By Thursday night, we had our power restored, and my husband and I remarked that the simpler life we’ve lived the past few years made it easier for us to prepare and deal with any  inconveniences brought by the storm. We are truly blessed, and know we have a guardian angel! 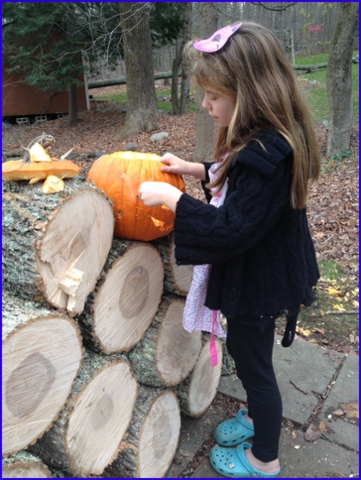 Despite no power, we didn’t let Sandy ruin our Halloween spirit.  It was the second year in a row a storm cancelled Halloween. Our community rallied together for the kids.  One shopping center  did trick or treating, and our hometown rescheduled the annual Main Street trick-or-treat event for the following Sunday.

So many in the surrounding areas are not so lucky.  One brave firefighter in Connecticut lost his life when a tree fell on him while responding to a call, and many, including children, lost their lives to drowning or trees.  So many are homeless, without anything left, or lost their loved ones. There’s hunger and cold from Sandy’s destruction.  It’s unimaginable, but a horrific reality.  My husband still has a job in New York to go to, while many businesses are completely washed away.  We’re looking into ways we can help our New York neighbors, as we’re so grateful we were spared.

So if you’re able to read this blog, you’re blessed!  Do me a favor…hug your kids.  Call your parents and friends. Tell them you love them.  Be thankful. 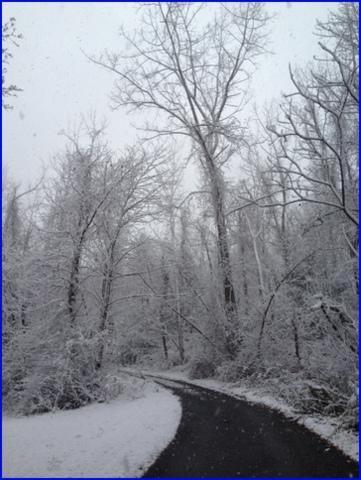 We’re now fine at my house, but almost two weeks later, many we know still do not have power. Nine inches of snow fell on Wednesday (thankfully warmer temps are on the way). Gas is being rationed in New York as well as New Jersey. Those who commute are finding their drive hours longer due to traffic and gas lines. Folks are cold, worried, and stressed. Keep the Northeast in your prayers.