Serenity. Is it an emotion?  A moment in time, a state of being? In this world where everybody’s busy, time’s a commodity, and there’s so much conflict everywhere, where do you find “serenity”? Farmgirls know! 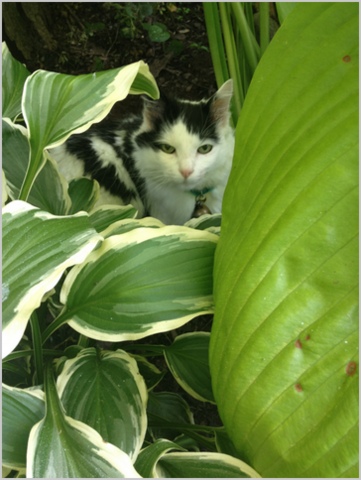 I’m a believer in not over-scheduling children, their every minute planned in timed slots.  I feel crazy-stressed when over-scheduled, (and often times don’t help myself by saying “yes” more than I should).  Some days it feels we’re trying to squeeze thirty hours into twenty-four, with our days resembling a revolving door!  I don’t want my child to feel that way.  There’s already so much coming at them nowadays. When summer arrives I try to have my daughter (and our family as a whole) less crazed.  As adults, there’s so much coming at us, too!  Turn on the news and it would seem as if the whole world is ending in a matter of minutes.

“Serenity” is defined as  “(1) A disposition free from stress or emotion; tranquility, quiet, repose. (2) The absence of mental stress or anxiety; heartsease, peace, peace of mind, peacefulness.”  I find it ironic that “heartsease” not only means “serenity”,  but is also a type of flower!  Plants, flowers, and gardening bring such joy for me.  There’s much peace to be found in connecting with the earth… there’s nothing more satisfying  than the “good” exhaustion that comes from having  mowed my grass, watered my veggies, and weeded my flower beds, bursting with color.  Just looking at my plants, knowing that I’ve tended them, or started them from seed gives me a pause from any worries that may be nagging.  Like good friends, when it comes to flowers, you can never have too many!  Seed catalogs make my heart pound faster than any clothing catalog ever could, and I’m like a little kid seeing a toy store whenever we drive by a nursery. 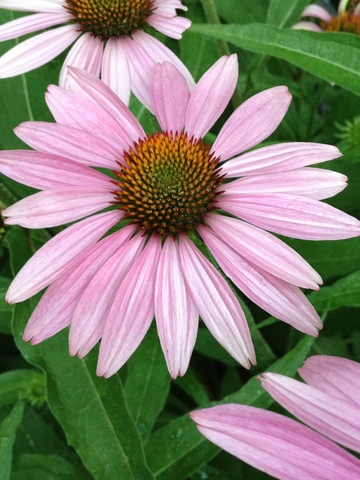 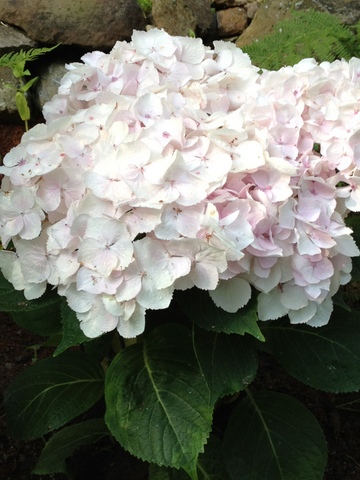 Last week, I fell head-over-heels for “Yarrow”, picking up a plant at the flea market.  I love its tiny, tea-stained mauve flowers and lace-like, delicate leaves! 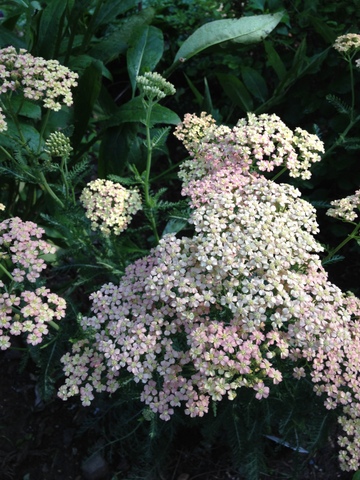 Also blooming now is my red Bee-balm.  The flowers look like Fourth-of-July firecrackers, and are deer-resistant.  It’s always full of hummingbirds.  I love to sneak outside before the rest of my family gets up, sit in the nearby garden bench with a cup of coffee, and watch the birds. 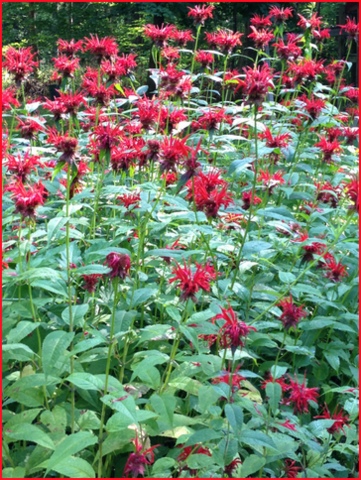 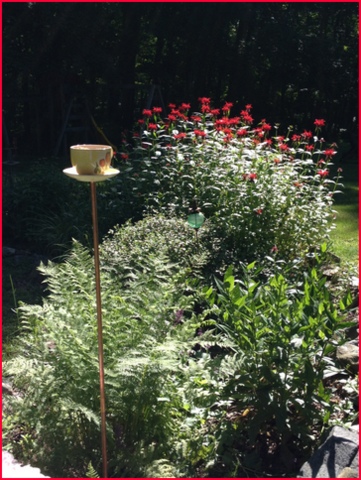 Above: Two views of the flower garden with my red bee balm one sunny morning.

Below: Friend, fellow gardener, and professional photographer Mike Loring took this shot of a hungry hummingbird in my yard recently. 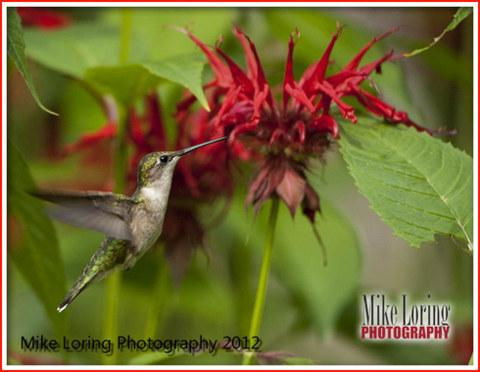 Keeping my hands busy doing crafts and hobbies makes me happy and peaceful, too. To increase the amount of birds visiting your yard, providing water is a must.  I’ve also wanted to earn the Merit badge for Birds (#10 under ‘Garden Gate’).  I  love whimsy and ‘Farmgirl style’, so I made a birdbath and a feeder following MaryJane’s ‘Tip of the Week’, August, 2010, http://www.maryjanesfarm.org/recipe-project/project-20100823.asp. Both projects were easy to do, and we’ve seen many more birds than before.  The smaller birds love the teacup feeder; they no longer have to compete with the larger ones for seed at the main feeder. 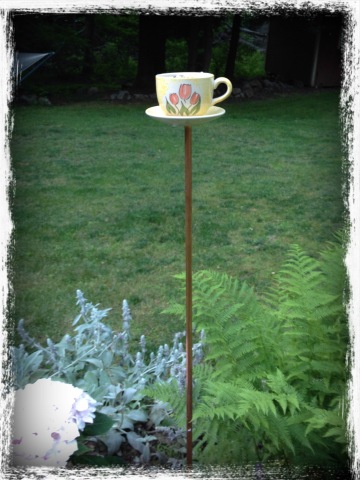 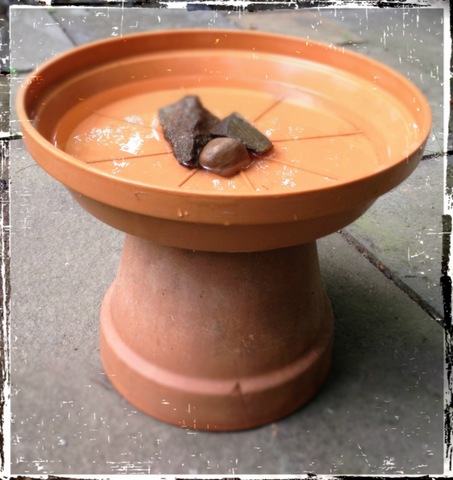 I’m really pleased how my bird feeder turned out and the birdbath adds the right amount of re-purposed, rustic charm!  The birds love it! 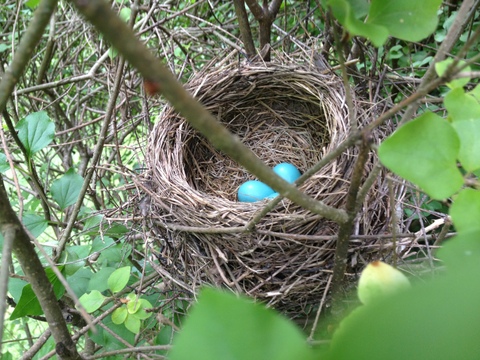 We’ve seen more birds than ever taking up residence in the yard.  I found this robin’s nest tucked away in my lilac bush, just under the deck.  Mama Robin has been busy and the babes are almost ready to fly on their own.

Being near (or gazing at a photo of) water is also a great way to feel peaceful, so my daughter and I headed to the beach for the day. She got out of school late this year, and I didn’t realize how tired and stressed we both felt until decompressing a day at the beach.  Of course, the decompression did not officially start until after we took a wrong turn, our beach umbrella would not cooperate, my daughter’s flip-flop and shorts’ zipper broke, and we both stepped on rocks getting into the water).  But after a day of fun in the sun,  it felt as if summer was “official”. 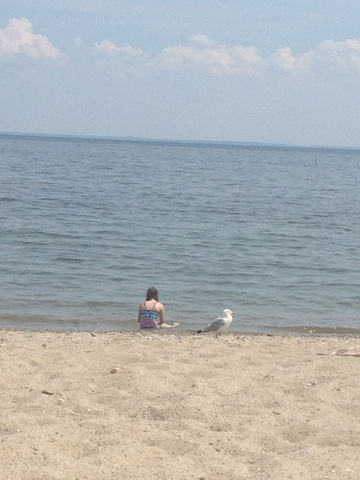 For July fourth, we took a drive up to Newport, Rhode Island. If you’re on the East Coast, it’s worth a visit. We spent the day walking around enjoying the atmosphere, eating  lunch by the sea, and enjoying an old-fashioned ice cream cone. The day closed with a sailboat tour in the Atlantic. We felt relaxed, refreshed…serene. 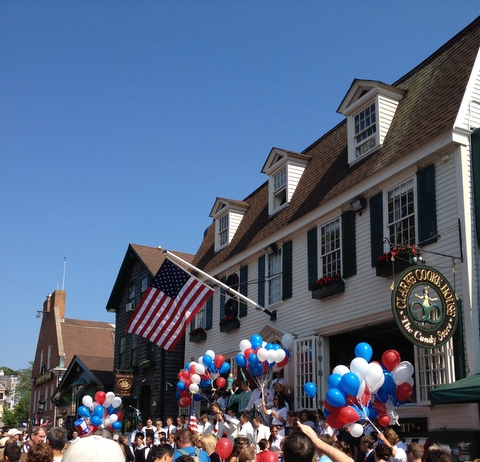 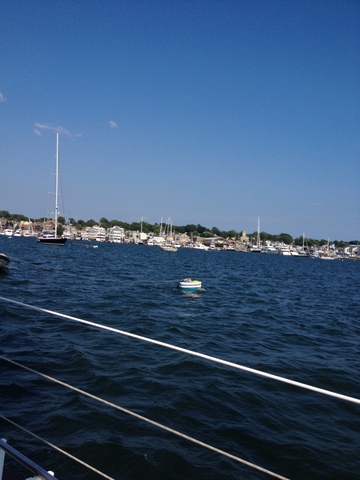 It’s impossible to not feel serene when on a sailboat.  On the water…Newport, Rhode Island 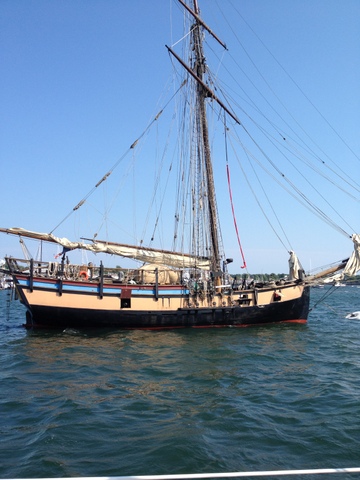 While on our sailboat tour, we passed this ship.  It was used as a prop in “Pirates of the Caribbean”. 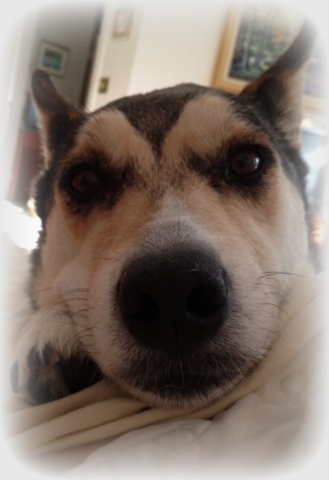 Still, I don’t have to go far to feel “serene”.  It’s scientifically proven that the act of petting a dog reduces stress.  This is what I wake up to every morning.

This week, my daughter turns ten, (or “double digits” as she puts it). Nothing’s better than the world through her eyes. As she’s grown she’s become my best friend, as well. (I’m still “in-charge”; I’m mom first, friend second). A total nature-girl, who often sees beauty where others might not, she’s my biggest reminder to slow down. 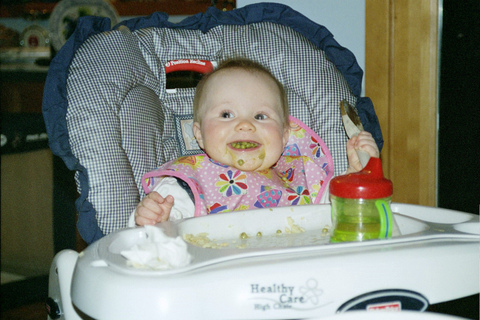 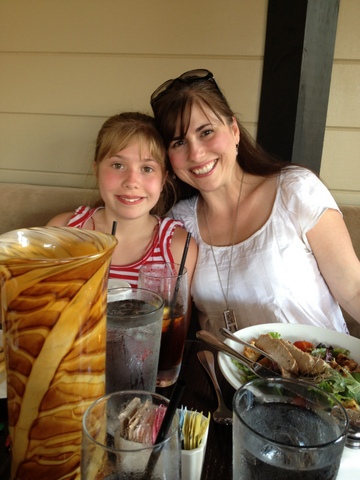 And POOF! She’s turning ten…my best friend and reminder to slow down and take notice!

Don’t get me wrong, I’m not one to sit still for very long.  Keeping busy keeps me sane.  I’ll be teaching some  knitting classes, canning, crafting, and chasing lightning bugs with my daughter (something she begs of me every evening). It’s just so easy to get caught up in everything we’ve got to do, letting life’s pressures rule us.  We forget to pause, see where we’ve been and what we’ve accomplished.  I’m making a point the next few weeks, even if for a few minutes a day, to unplug, unwind, and just “be”. Like the old saying goes,  “Stop and smell the roses!”  Tell me…where do YOU find “serenity”?