Posted on May 9, 2013 by Rural Farmgirl Alexandra Wilson

Whew! What a day, Farmgirls. I’m finally home and sitting after a day full of: new jobs, new homes, escaped critters, dog walking in the mud in formal clothing, a wonderful evening with some friends, and late night wading through vernal pools…

It may just be the lingering vibe from a “glam rock” themed party I attended last weekend, but David Bowie said it best “Ch-Ch-Changes/Turn and face the stranger.” 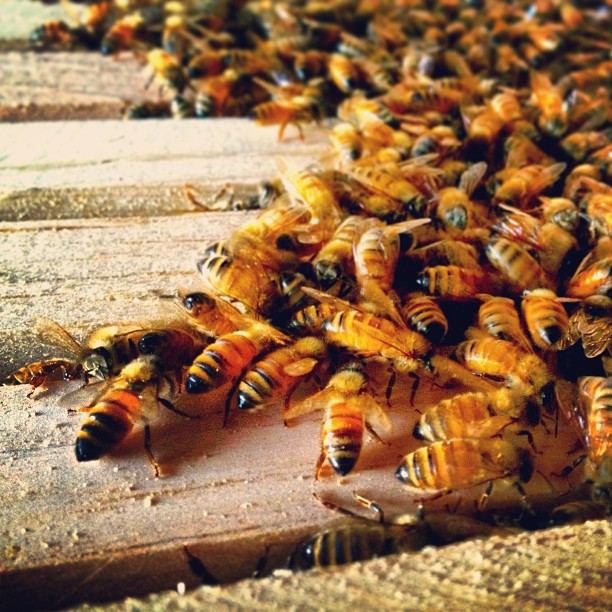 I’ll start off with some events from today, because they just seem too entertaining to keep to myself.

I’ve started a new job as the director of a local non-profit conservation group called Alaskans for Palmer Hay Flats. This is a small organization that works with Alaska Fish and Game to increase stewardship, awareness and appreciation for a game refuge that is on the south side of town. I’m a bit overwhelmed by the job at the moment, but I am confident in my ability to learn the ropes pretty quickly.  Luckily, this is a part time job, so I will continue to farm this summer. Unfortunately, summer feels a long way off, and the farming season has been delayed by several weeks because of:

With this super late arrival of spring combined with late snow, the farm fields all around Palmer are underwater. The ground is still frozen, but the snow melt is considerable. Moki (my dog) and Taz (a farm dog) were able to fully swim in at least one of these ponds on the farm.  It looks like there are rice paddies everywhere…I wonder how well rice would grow in AK? I’ll get back to this standing water soon.

So, I continued to train at my job this morning which was not a big deal. However, I received two phone calls from my old housemate fairly early in the morning which I politely silenced and was going to address at lunch time. These phone calls were followed by a text that said: “I got all of your chickens back in the coop, but I think one got taken.” Of course I freaked out a little bit! I immediately called my wonderful friend, and found out that something had broken into the coop and created a hole large enough for the chickens to escape! Taya (the friend) said that she noticed the rooster out in the middle of the yard while eating her breakfast and grew concerned. Four of my five chickens were wandering around the yard, but the other remained in the coop. In the end no chickens were harmed, they were just a bit rattled. After some investigation, I think a fox got into the coop, as there was a tuft of orange fur on the chicken wire around the place where the foreign critter had entered. I’m going to attribute their survival to being hardcore, giant, Alaskan chickens with a great farmgirl mom like me…oh yeah, and a great friend to herd traumatized chickens. 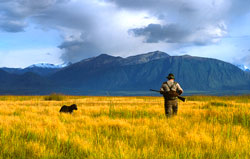 Hunter on the Hay Flats, courtesy of Alaska Fish and Game

After blocking up the entry point and chatting with Taya for a bit, I realized that I had to get back to our new residence (more on this in a bit, too) to let Moki out and take her for a walk before she went completely insane. As I started to pull out of the farm, I noticed a GIANT swarm of bees outside of the common garage…the common garage I had been housing my bees in until night time temperatures stablized a bit and the risk of snow was minimal.  I’m not a beekeeper by any means, I just really want to be one someday. I figured I might as well start now and learn from my mistakes…I’ve encountered mistake number one: do not be lazy in terms of screening off access points to a hive when bees are in a storage shed. I’ve also encountered mistake number two: move bees to their final spot before the weather is super nice. The day was beautiful–one of the best days of spring, yet. The bees realized this, too, so they emerged in search of delicious spring faire.

To battle this, I put on a beesuit, removed the poorly installed screen, moved the hive outside and tried my darndest to shew bees out of the garage. Of course, two folks were getting a tour of the farm at this exact moment, so I had to apologize profusely and make sure no bee allergies existed amongst the small group. I really, really, really hoped that the bees would all go into the hive by night, and that I could fully move them then. I should research this whole beekeeping thing a bit more…but I’ve taken the learn-from-experience route instead. At this point, I had to get back to my suredly insane dog to give her a walk, and get ready for dinner out with some of my favorite lady friends. Perhaps the best part of all of this is that I was in my best business-like attire the whole time (the beesuit helped disguise this for a bit). How I wish I had a picture of me trying to herd bees in the large-man-sized beesuit that I use!

Anyhow, I finally got home to my dog, who was suredly insane; and we went for a super quick walk around the new place. Again, I was in business clothing and walking like a mad woman through huge puddles and slush and mud. I had changed my boots so this was a plus. The walk also consisted of me calling and texting my wonderful lady friends about how I was going to be late, and sorry, and escaped animals, etc.

Dinner was lovely, and we followed it with a nice walk at the Nature Center near one of my friends homes. The evening was absolutely beautiful.

After this, I returned to the farm to deal with the bees that had hopefully all returned to the hive with the falling of night and the arrival of the evening chill. It was about 11:30 p.m. by this time. I discovered that most of the bees had, indeed, returned to the hive. There were wtill a few stragglers on the garage doors and windows, but they were largely relocated. Because it was late, and I had to move the hive a long distance, I decided to use my car. This was probably a poor decision, but it worked and the bees didn’t get into my car, so I’m calling it a win. I placed the hive in the back of the station wagon, covered it with a heavy blanket and drove as close to the final spot for the bees before the chance of getting stuck in the mud. I used a Garden Way cart to transport them the rest of the way.

This is one of the pools I traversed. At least it stays pretty light in Alaska, even nearing Midnight (picture taken at ~11:45)…

Here is where the MUD and standing water come in…The spot for the bees is at the very back end of one of the fields on the farm. it is inside an old fenced area that was used for horses. It has been abandoned for a few years, but the only access point is one gate. This one gate is smack dab in the middle of a vernal pool…I had to traverse it with hopes that it wouldn’t be that deep. It was that deep, the water was above my knees and freezing. I feared for my bees that they may drown in the water inundating the cart and for my feet and legs which were getting increasingly cold as the night grew deeper. I finally got the bees to their spot and they seem to be fine. I probably won’t visit them again until the pool has dried up (soon?!). There isn’t much I can do now but hope that they don’t freeze at night. I hope there aren’t any bees remaining in the garage!

Returning from the beehive was just as exciting, as I decided to take a different route with hopefully fewer pools. I was mistaken. I ended up just taking a route that had a longer, colder (yet shallower!), pool to cross. It was past midnight by then, and I didn’t really care anymore. I ended up driving the twenty minutes home with standing water held inside my waterproofed boots and a keen ear to possible bee hitchikers in my car (there weren’t any).

You can just barely make out the dogs enjoying this vernal pool that is encoraching on the potato field…It’s big enough to have waves.

I think all of this frantic-ness is largely due to change. I’ve already touched on my change in jobs and the change in weather; the final piece is a change in residence! A few weeks ago, Evan and I moved out of the wonderful little house on the farm and up Lazy Mountain (which can be seen from the farm!) to a small dry cabin on 150 acres of conservation land. We are staying here as part of a deal to house-, dog- and chicken- sit for the owners who are completing a huge sailing trip that will take almost two months to finish. After this we are moving into a new place…a new exciting place that I will reveal in posts to come (probably next week…). Anyhow, this cabin is wonderful. We love it. It is dry, so we have to haul water from the main house.  We have to use a bathroom that is attached to the main house, as well. This new type of water use has been incredibly helpful in getting us ready for the new exciting place that we will be living…

The cabin is surrounded by forest and it is right on the edge of the mountain, overlooking downtown Palmer, the Matanuska River and the Chugach Mountains. There are maintained trails throughout the property. The owner also has an amazing chicken coop that she has made from a converted dog team kennel as well as a huge vegetable garden plot that is begging to be planted as soon as the soil is ready. We love it here!

There have been some pretty big changes in my life over the past several weeks, but all of them have been good, and I’ve been learning so much! Being a relatively young, landless farmgirl has its perks once in a while. One day I will hopefully only have one job, and a home that I stay in for more than a year, and some beekeeping skills. Until then, this ride is pretty fun!

Until next time, Farmgirls, enjoy the changes in your life if you can!