Ahhh, traditions!  Almost every family has them, and they are especially prevalent this time of year.  A lot of families bake batches of cookies or create ornaments for distant relatives.  Numerous others have little whimsical things that are particular to their families. 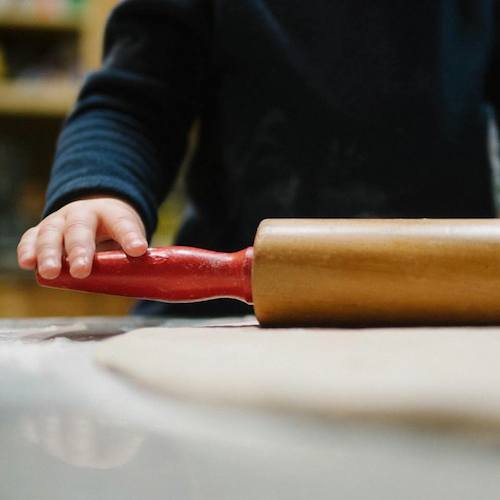 We can’t start them too young, can we? Look at those cute little hands. This is making Thanksgiving leftover pizza!

With Thanksgiving last week, I’m sure many of you dusted off some of your familial traditions to make it a special day.  For the entirety of my childhood and through early adulthood, I spent Thanksgiving with my mother’s side of the family in North Central Minnesota.  My mother has long been the matriarch of this gathering.  It is always delicious, fun, full of laughter and full of fun.  When there actually used to be snow on Thanksgiving we’d have a “golf” tournament on the frozen lake.  We’d sled. We’d play broom ball. We would build snow people.  The day after Thanksgiving my immediate family would go out onto my grandfather’s property to search for and cut down our Christmas tree.  These are very fond memories of traditions that have faded as we’ve grown older and the winter has arrived later and later.

If I’m counting correctly, I have only been to ONE of my maternal side’s Thanksgivings of the last eight!  Wow, that makes me feel bad.  Sorry family.  However, I have spent every Thanksgiving of the last six years with Evan.  We have started some of our own traditions, too.  That’s where this post comes in: making lefse!

Have you ever had lefse?! It is a Norwegian flat bread that is actually not that exciting if you think about it: it’s just potato, white flour, butter, cream and some sugar. It’s very white and bland, like a lot of Scandinavian food.  It reminds me of my grandfather’s love of pickled herring at Thanksgiving which reminds me of lutefisk..blech!  However, lefse is delicious!  Perhaps it’s the nostalgia…or the processed flour and white sugar and starchy potatoes and butter…mmm….Anyhow…

Evan and I started this tradition a few short weeks after we met in South Korea. We kind of fell for each other really hard and quickly…it was lovely!  We made lefse in his little apartment in Seoul and shared it with friends during some holiday celebrations.  He had made it before, I had merely eaten it.

Of the two of us, he remains the expert on all things lefse.  I love that we have a cooking tradition that is his! (Although I am a decent cook, when it comes to holidays I bring Snicker salad to the table and Christmas Eve Chinese take-out for my traditions). 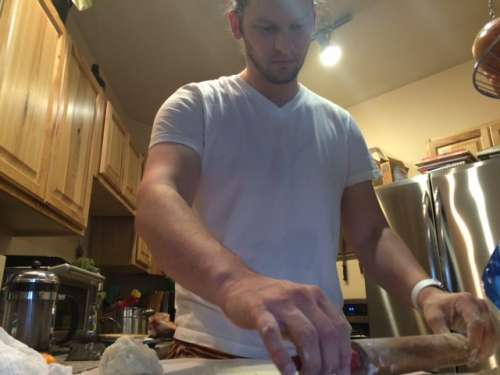 We didn’t make lefse last year because of a new baby and lack of space in the yurt and yada yada yada..excuses.  Before that we would make it the night before Thanksgiving because we celebrated with a large group of displaced graduate students at our “campus” farm house.  This year, however, we celebrated Thanksgiving with just our family!  It was lovely and relaxing.  We didn’t have any time crunches and didn’t have to figure out what we would cook at home, what we would finish at another house, how to pack it all…you get the idea.  I just prepped most things the day before and we spent the morning of Thanksgiving cooking as a family.  Ava was a fabulous helper.  It is so great to share our traditions and passions with her!  I can’t wait for our family and traditions to grow. 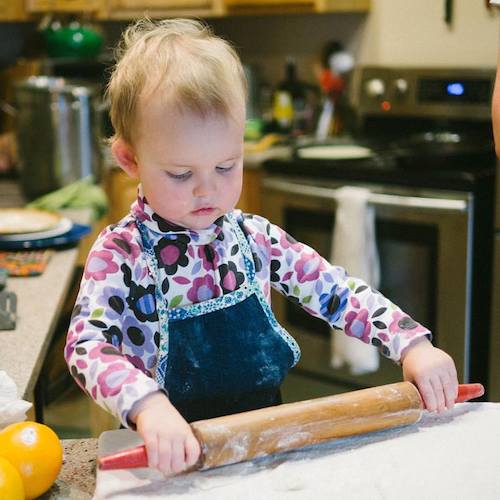 So, here is our lefse making process:

I peeled and boiled potatoes the day before Thanksgiving.  I put them in the fridge and forget about them.  I slept in on Thanksgiving day and woke up to all of the potatoes having already been riced!  Evan was obviously excited to take on this lefse challenge after almost two years of deprivation (in the Midwest one can buy lefse at most grocery stores…not the case in Alaska!).

Evan mixed the dough to a perfect consistency using just under five pounds of potatoes…and I don’t really know the proportions of the rest!  Isn’t that terrible?  Maybe he’s just trying to be sneaky with some passed down recipe.  However, I’m pretty sure he just scours the internet for a bunch of recipes and gets a gist of what he should put in it and then mixes the dough until he gets the right consistency.  I liken the consistency with that of play dough with some elasticity.

I must divulge: We are NOT lefse aficionados. We make it once or twice a year because it is fun and relatively easy.  That being said, we actually do have an official lefse griddle with the correct rolling pin and flipper stick thingy and pastry covers for the rolling board.  But that stuff is in a closet in Minnesota, waiting for us to return…So, we rely on some good ol’ Nordic ingenuity to get our lefse prepared.

-Standard rolling pin (ours is small and wooden)

-Stovetop (we have used gas and electric) 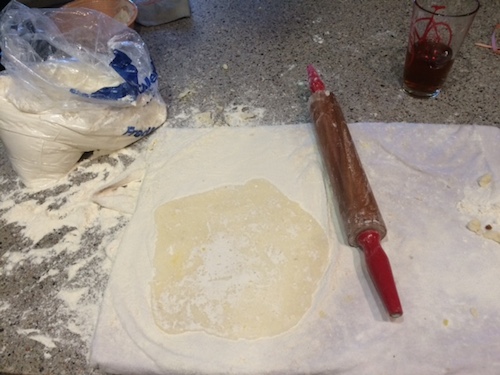 T-shirt covered cutting boards work juuuust great! As you can see–the non-pregnant (and non-toddler) cook also gets some beer to help with the process.

We wrap the t-shirt around the two cutting boards to create a rolling surface.  The pans are put on the stove over medium-low heat, and a paper towel lined plate is placed at the end of the assembly line to offer a place for the finished product to rest.

Evan portions out and rolls each piece of lefse with painstaking attention to detail.  He can make them so thin!  It is impressive, to say the least.  He carefully wraps the flattened dough around the rolling pin and transfers it to the awaiting heated pans.  This is where I come in.  I’m the flipper and finisher of the lefse…I also happen to be really great at burning lefse while I try to take photos of everything going on while simultaneously watching the turkey and estimating what time other dishes need to go in the oven. 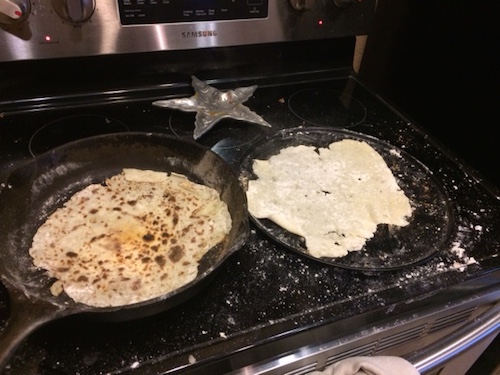 This is where I get to make a mess! As the lefse flipper/stacker/burner.

Of course, like any good flat bread (at least in my experience) the first few are terrible. Some stick.  Some burn.  Some are paler than me in the height of winter. As the perfect temperature for the pans is found, they get better and better until a true rhythm is established.

Ava helped Evan roll out some of the dough.  She remained engaged with our lefse making for nearly the entire process–and it was a long multi-hour process! It was very, very cute.  She was “mixing, mixing, mixing” and “rolling, rolling, rolling” like a pro.  She also made sure to stay away from the hot stove. Like most kids, she loves dough!  It is such a fun, tactile thing for kids to explore.  I’m sure she’ll surpass me in her lefse making skills in the next few years, and I can become the official taste-tester (someone has to make sure the darn things are palatable!). 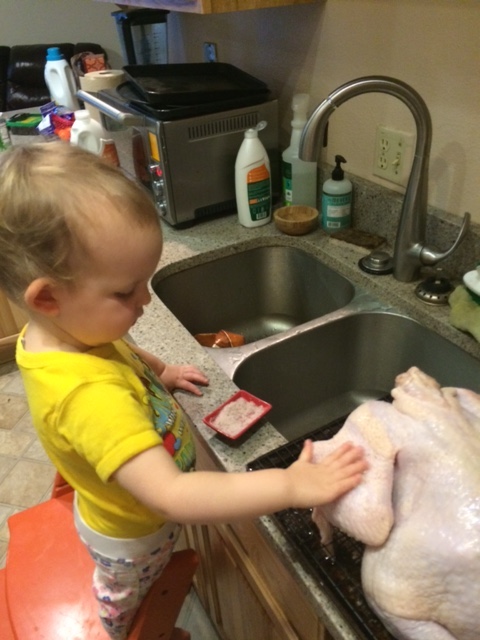 Maybe she’ll take over the turkey prep, too? Here she is helping me dry brine the “kurkey.”

In the end we had about forty pieces of lefse.  We eat them the “right” way with butter and white sugar.  I think I ate them heated up with butter, cinnamon and sugar as a kid…but we decided that cinnamon is probably too spicy and has too much color for true Scandinavian palates (I kid, I kid..a little)! Evan prepared some of them to add to our small Thanksgiving spread, and I moved on to finishing the rest of our meal.

We just finished the rest of the lefse off.  I think Evan might be going through withdrawals!  A Christmas batch is in our future, I can tell! 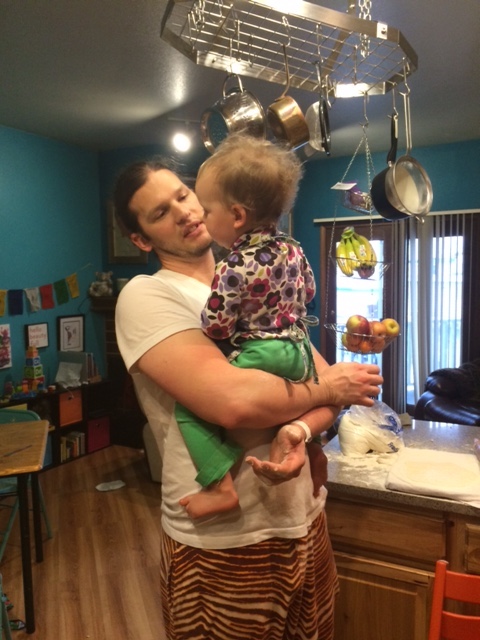 A job well done by all involved!

What holiday traditions do you have–food related or otherwise?

I hope the season is treating you well and some of your traditions are peeking their heads out for some celebrations!