Learning to Say No

Have you ever seen or heard the acronym FOMO?  It stands for “Fear of Missing Out,” and I think it’s where this post stems from…

The key word in the title for this post is “learning”  and what a steep learning curve it is!  This has been a life long problem/process for me.  After  decades of taking on too much it is a hard habit to break.  I think the biggest problem is that I’ve often been successful at overextending myself…but we’re never too old for some much needed negative feedback. 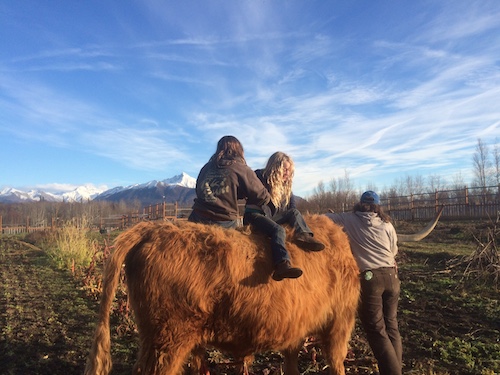 Saying “no” can allow us to stop and take in the scenery. The scene is much snowier now, only a couple weeks after this photo was taken!

I’ve had warning signs over the years: As a teenager, my mother often warned me that I was “burning the candle at both ends” (For the record, I still heard this from her when we were visiting her over the last couple of weeks!).  As a graduate student, I had a little emotional breakdown when visiting my advisor–he told me that learning to say “no” was one of the most valuable lessons he ever learned and encouraged me to do the same.  As a mother I find myself feeling guilty about changing my daughter’s schedule up too much because of my own obligations, resulting in a crabby toddler. 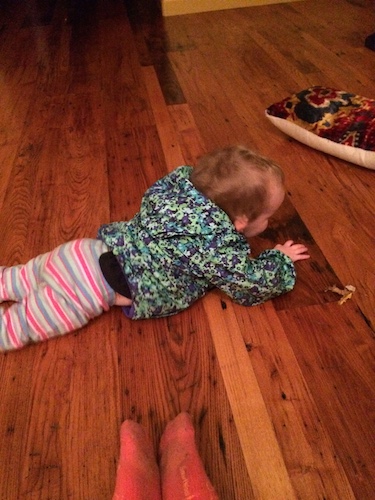 If you didn’t notice, I missed my last post.  I was in Minnesota visiting family with Ava before the new baby arrives (only five weeks until my due date!  This pregnancy is going so quickly…).  I actually had it all set up, even almost fully written–but then both Ava and I got ravaged by a–luckily short lived–head cold.  It was my second cold/flu of the season and again, today, I’m feeling something coming on.  Ugh! 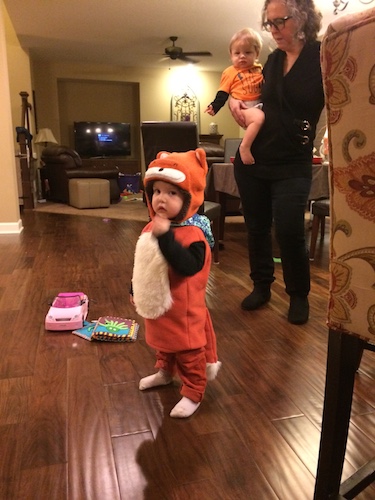 We might have stayed up too late and eaten too much candy on Halloween…but I think it was worth it?

Why does this happen?  It’s simple.  I take on too much, expend too much energy while not sleeping enough (combination of late nights/early mornings, toddler who still doesn’t sleep through the night, and pregnancy insomnia) or eating well and it takes its toll.  I want to say that it was easier when I was younger and that I wouldn’t get sick…but in reality that’s a lie!  I had sinus infections all.the.time.  I was just more willing to keep on truckin’ even when sick.  Now that I have more than just me to look after, I am more willing to take a break and recuperate. 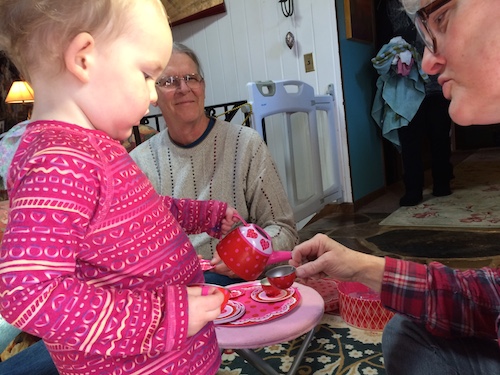 Always save some time for a relaxing cup of tea with loved ones. 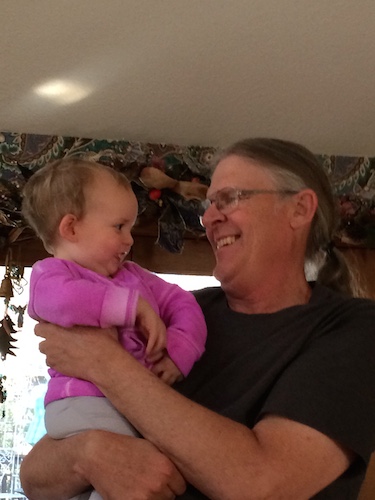 And a good laugh… 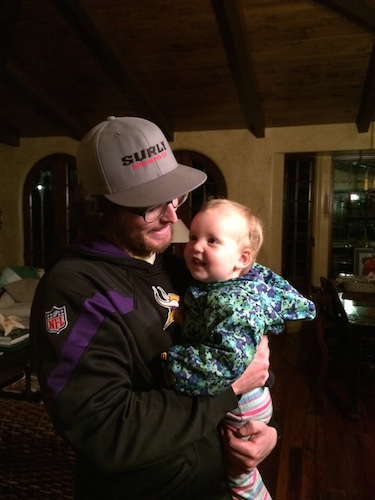 And a good cuddle… 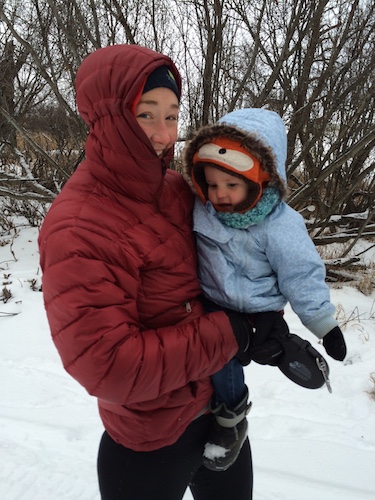 And a good walk in the snow.

So, there are things I cannot say no to (yet)–family obligations, showing support for missions or projects that I or loved ones are passionate about, most parties/weddings/celebrations if I am geographically “close” to them, and meeting with dear people who I haven’t seen in a long time.  I have gotten better at saying no to some things, but I still hold too much guilt when I do. This list used to be much longer but I’ve culled some things: namely work-type obligations that don’t necessarily benefit me, my family or my community (sorry community, but I have sacrificed you more often these days).  These are usually the kind of obligations that I dread attending when the time comes.  I ask myself, “Why did I say yes to this?  I don’t have the time to x y z right now…”  For example, I was asked to teach a few outdoorsy programs last summer for very cool organizations in amazing locations.  My first reaction was “YES!”  But I had to hold myself back–I had to do a reality check.  I have a child that would need to be cared for.  What does this job even pay? enough to pay for childcare? How much prep would I have to do (most likely in the wee hours of the morning)?  I knew that saying yes would result in an unnecessarily stressed out me even if the gig was a good one.  I proudly said “sorry, but I can’t.  Here are a few contacts of others who may be able to do the work.” 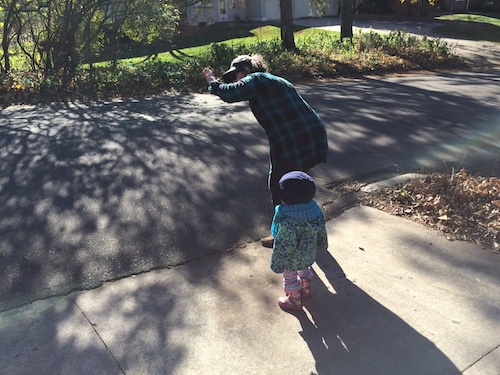 It’s good to have grandmas around to teach us about looking both ways before crossing the street. I wish I had family in AK…but I’d be more inclined to take on little jobs here and there with “free” childcare!

I must say that I have always been good at saying “NO!” to pyramid scheme type opportunities.  I am proud of this as they are often enticing…especially now as a stay at home parent.  My sister-in-law and I were chatting the other day; she had recently, and seemingly regrettably, just gotten roped in to being an essential oils seller and representative.  I know some people are very happy and successful when it comes to these companies…but I also know that I would not be one of those people!  I am a terrible sales person–especially when it comes to selling to people I know and love.  This ability to say no right off the bat has proven to be useful with the precipitous rise of Facebook and other social media “friends” who are now sellers (pushers?) of almost anything imaginable! 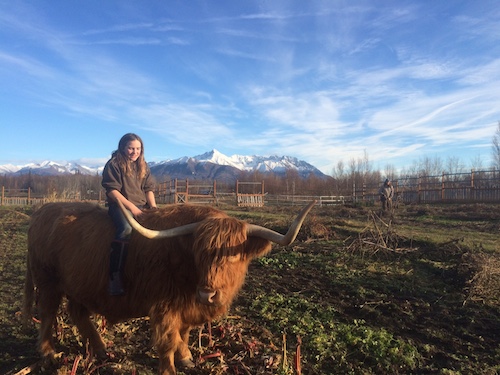 Maybe (the steer) knows how to say no without the guilt.

Is looking out for numero uno selfish?  Or is saying yes to everything and not being fully present even more selfish?  Does being selfish even matter?  Who knows…all I know is that I’m tired and need to check my priorities as I fill in slots on my calendar.  This is especially true for all of us during the holidays–So many parties!  So many projects!  So much sugar!  So many sick people in confined spaces!  It’s a recipe for immunological disaster (resulting in a lazy January). 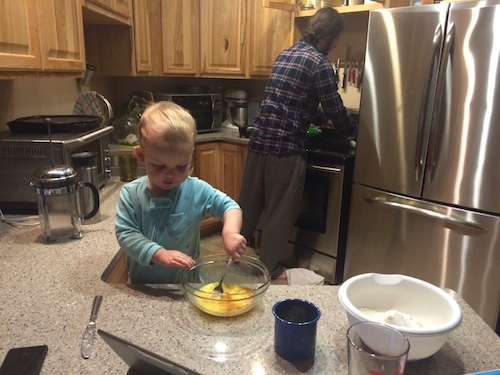 Taking time to make real, good food should be higher on my list of priorities.

One great thing about having a baby due on Christmas?  I have a perfect excuse to say “no.”  Which gets me on another goal of mine: stop making excuses, even if they are the real deal.  Why do I need an excuse to say I can’t do something? 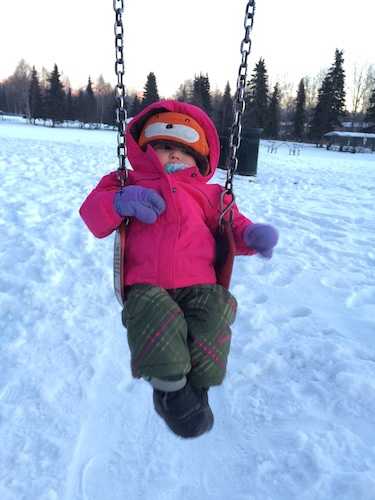 Maybe swinging in the park is more appealing than doing x y or z! 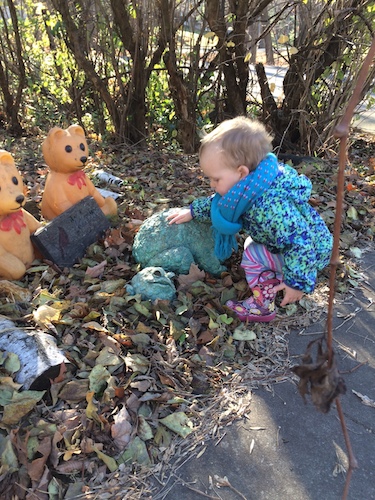 Or maybe we need some extra time to chat with some bears and pet some frogs. Who knows what we can find with more free time?

All in all, I’ve had a great life of saying, “Yes! Yes! Yes! I may be late but I’ll be there!” But the time has come to show my children and myself that life can be great by saying, “Yes! No! We’d love to, but maybe next time!” and having some free time to enjoy with each other.

With that, I hope you find the power to turn down some things during this busy season.  We all have plenty on our plates.  With all of the downright crazy things that are going on in the world, it is a good reminder that there is more to life than just go-go-going at mach speed all the time.

Just say no to overextending yourself!

(A message from your Rural Farmgirl)

Sending you peace, love and free time from AK,