My Silent Night, My Holy Night

A very cool thing is about to happen on December 21. It marks the coming of Winter: Winter Solstice, the longest night of the year. The changing of the seasons, an ancient time of celebration. Welcome Winter!
But you know what else? There will also be a total lunar eclipse on December 21st. Well, really tonight! The eclipse begins at 1:33 in the morning, eastern time. Very cool. NASA says having the total lunar eclipse occur on Winter Solstice has only happened once since year 1. Once! And that was on the Winter Solstice 1638. Yes, it will happen again in 2094, but I don’t imagine I’ll be around to see it. What a great reason to stay awake. 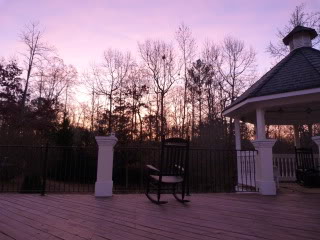 This morning, I enjoyed my coffee with the sunrise. The air was wonderfully cold. The coffee wonderfully hot.

These days before the 25th present us an awesome opportunity to put some silent and holy in our crazy Christmas schedules. What great nights to build a bonfire and spend some time outside. Tonight, when the lunar eclipse will be visible; and tomorrow night, the night of the Winter Solstice.

I love to celebrate all things winter, including Winter Solstice. I confess that I hadn’t really heard of it until rather recently. I grew up in the south, in the Bible belt. There weren’t any Winter Solstice happenings until the groovy people moved here. And the people from the cold regions, groovy or not. I had no concept at all of Winter Solstice until several years ago when we were invited to a Winter Solstice Party. Everyone was invited to bring their drums.

I don’t have a drum; but you probably guessed that already.
We are mainstream. To the core, middle of the road. That, my first Winter Solstice party, stretched my mind. Like a big ole rubber band being pulled out and out and even further out. (Well, without the painful “pop” as it comes back in.)
I drug my husband along. My husband, who doesn’t really go for mind-stretching things, who doesn’t really like the whole new-agey energy stuff, who was raised in the Catholic Church and attended Catholic schools, came. Because he loves me.
The party had an exceptional energy about it, with people way groovier than us all around. We ate oysters in the cold on the back deck, gathered around an outside fire, gazed at the stars, and listened to drumming. And I must mention the Chocolate Peppermint Cake. That cake was reason to celebrate in and of itself. Oh my, how I wish I had that recipe! Wait, now that I think about it, I have to correct the oysters thing. I doubt we actually ate the oysters. I don’t remember this part specifically, but I imagine we watched everybody else slurp the oysters and we ate what oyster-alternative they served.
As we were leaving, my friend shared with me that after the party fades, their family stays outside to sing the trees to sleep for the winter. Oh, I loved that. What a wonderful tradition.
On the way home I asked Hubs if he wanted to sing the trees to sleep when we got home. He wasn’t over the drumming yet. Let’s just say he was out of his comfort zone there.
Sometime later, I was telling another friend about the Winter Solstice Party we had attended. She said (with complete distress and distain on her face), “What kind of people celebrate Winter Solstice? Where do you know them and why don’t they just celebrate Christmas like they should?” I replied the way I often do to statements like that, by quoting an old Hymn: “Yes, well, they’ll know we are Christians by our love, huh? And our tolerance too…..” In the south, we smile when we say things like that. It goes down a lot easier with a smile.
Anyway. After having attended that party several years ago, I’m here to tell you that I thoroughly enjoyed the celebration of Winter Solstice. What a peaceful, meaningful evening to honor the changing of the seasons. Now I still haven’t developed my rituals or our precise method of celebration yet. It is a thing in the works, a haphazard thing at this point. Please share your own rituals or traditions for this changing of the seasons.
One thing I had enjoyed for many years is a Winter Solstice video. My sister gave me a video of Windham Hill’s Winter Solstice ice skating show on the ice at the Arctic Circle. That’s probably the most remarkable thing about this video: the setting is stunning. The skaters are out in the middle of the ice, beautiful scenery all around. I could only find this one clip from that old tape on youtube. The song is Phil Perry’s “Winter.” Wow. I love watching this. Now that’s a celebration of Winter Solstice. (Here’s another cool video, though not of ice skating, but of trees. The music is Enya’s Memory of Trees.)
This year I had my incredible (early) celebration of Winter Solstice. On this past Sunday night, I gathered with 13 other women to celebrate Winter Solstice at a women’s spiritual retreat center. One of which, by the way, I know to be a Catholic nun. Just sayin’. What a wonderful, quiet, profound experience.
We began the evening inside as we gathered in circle around an altar of pine boughs and candles. The leader shared thoughts on this change of seasons and appropriate readings. We then had a potluck feast as the bright almost-full moon rose. I took my Orzo and Wild Rice Dish, the one I’ve written about before. After some mulled cider, we bundled up and lit our candles. Flaming lanterns outlined the large circle of the labryinth. The night was clear as we walked the labyrinth together. I found my Silent Night Holy Night.
It was a beautiful, sacred evening.
Now it is time to plan my family’s own Winter Solstice celebration for Tuesday evening. Fire is an important element in the coming of Winter. 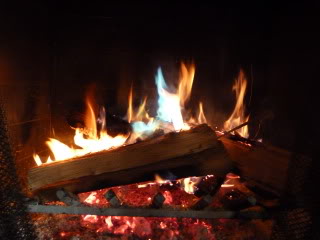 This was our first fire of the season weeks ago.

And I have to add this photo. It is Doodle in a chair in front of the fire. The smaller the ball, the colder the weather. Looks like Winter is here! 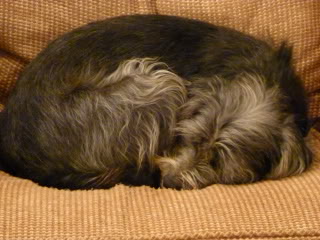 So a fire will be the focus of our outside experience. Yes, we’ll be hearing the sound of traffic, but we’ll be under the stars and trees in our yard, gathered around a “campfire.”
I’ll serve a simple meal of Lentil Soup (most likely), salad, and some fresh bread. Perhaps some pasta for good measure. And of course, some pomegranate arils.
I know many people don’t use electricity during the evening and night of Winter Solstice. Instead, they’ll light candles and experience darkness and silence in a way much like our ancestors. Our ancestors: just think they didn’t know if the sun would ever return. Now that we know it will, we are tempted to take it for granted. This celebration really does help us appreciate nature.
I’ll find a winter reading and force Hubs and daughter to listen to it. Music is also an important part of any celebration for me, so of course I’ll have to include some in this one. I’ve never been much of a singer, but Hubs and daughter are. So maybe, just maybe, I can encourage them to sing the trees to sleep with a lullaby. I know my daughter will do it. Maybe Hubs will too. Especially if I come up with a Beatles song. Maybe Here Comes The Sun. Yeah, that’ll get him singing for sure!
And you’ll never believe this, but I’ve got my own drum now.
So look to the night sky. I’m sending out love and peace and blessings and joy to you! Merry Christmas to you and yours! Celebrate!!
Until next time, Friends, savor the flavor of life!