Every once in awhile I question my inherent ruralness.  I am MaryJane’s RURAL farmgirl, right?  But, what really makes me, my experiences and my blog rural…?  I live in a yurt, but I also live in a neighborhood that feels like a suburban subdivision.  I enjoy driving trucks and tractors, but own neither.  I have to run to the big city to get exotic foods or to find a mall, but I can get nearly everything else in the nearby towns…so what is it, what makes this whole time in my life rural?

After much thought and re-reading USDA census reports and Webster’s definitions of rurality, I figured it out.  For me, as I’m sure it is and equally is not for others, the rural life rests in its simplicity. 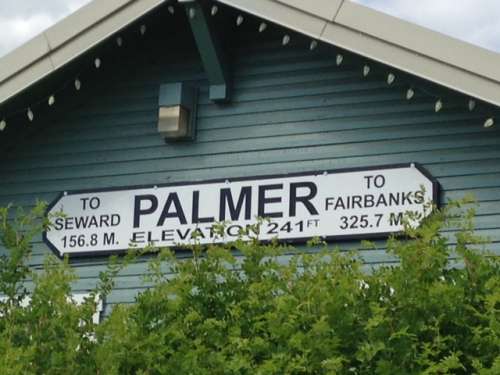 The historic Palmer Train Depot. No trains come through here anymore, but the depot holds a weekly farmers market as well as seasonal and special events.

Way back when in December of 2012, I wrote “Rural, Rural, Rural.”  I had been living in a rural area for just under a year, and I had made many observations about rural living.  I noticed that Carhartts are a staple in everyone’s closet, I noted that there is one Dairy Queen (as every rural town should have), and the traffic lights are sparse.  Now, a year and a half later, these observations are still very true.  Each person in my family owns at least one pair of Carhartts and we have gotten Dairy Queen gift certificates as gifts.  But there is so much more (or less…if we are going with the idea of simplicity)! 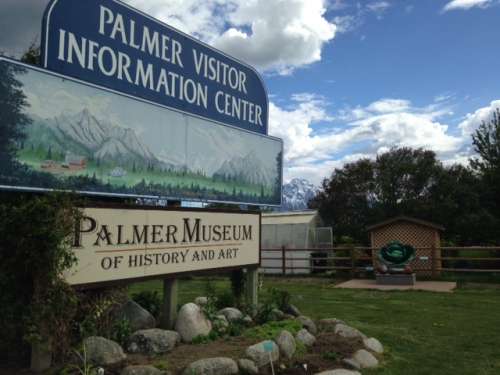 I love the Palmer visitor center and museum!

I still struggle with the idea of Palmer being a rural town.  Is it really an ex-urban town? a commuter town?  It is, in fact, part of the Anchorage Metropolitan Statistical Area, but so is Talkeetna, a town of 900 people that is a three our drive from Anchorage.  I think rurality is hard to define in Alaska.  So, since I can’t seem to find if it is objectively rural or not, I will have to subjectively announce once again that yes, Palmer is rural!  My only proof is anecdotal evidence.  I am in no way a socioeconomic genius or a master of population dynamics.  I simply feel rural when I’m here, and that is good enough for me. 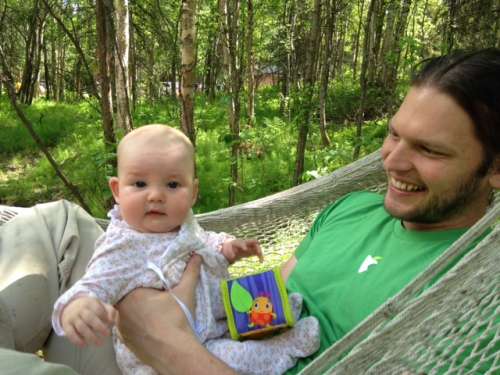 Simply hanging out in a rural hammock. Unfortunately, mosquitos like rural places, too.

There is a certain type of simplicity to life here.  This doesn’t mean that everything is slow, easy and hassle free at all times–in fact it is far from it!  However, we aren’t as spoiled for choice as I have been in other cities and suburbs.  If the local grocery store or shop doesn’t have it we have to wait until we head into Anchorage (or order it online…the internet makes modern rural living a bit different than it was twenty years ago, I imagine).  While the cost of living in a rural area is often cheaper than cities or suburbs, it can end up getting pretty expensive to drive everywhere to pick up the finer things in life.  Just with this small difference in accessibility, life is simpler (at least for me!).

There is something in the word “rural” that implies simplicity. The definition of rural is “of the country.” It comes from a long etymology of words that mean “plain field” “open land, country” and “space.”  What is more simple than open space?  Nothing is encumbered, crowded or complicated in open space (unless you happen to be Sandra Bullock in Gravity, but I digress).  “Rural” is related to words like “rustic,” “unsophisticated” and “rough.”  Now, I’m no unsophisticated country bumpkin, and I don’t know anyone who is.  But it’s kind of fun to think that people might think that we are all rough and tumble dummies, isn’t it? 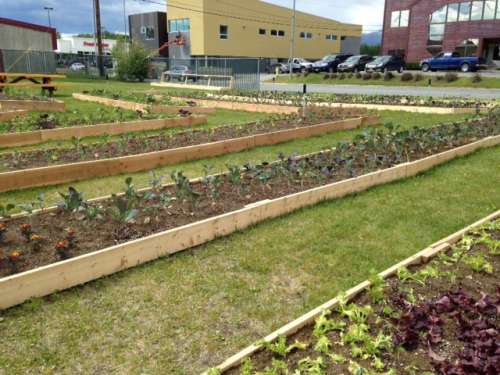 This recently completed edible park is one block from the main stretch in Downtown Palmer. The foods grown here are free for anyone to harvest and eat if they desire. What a cool idea! 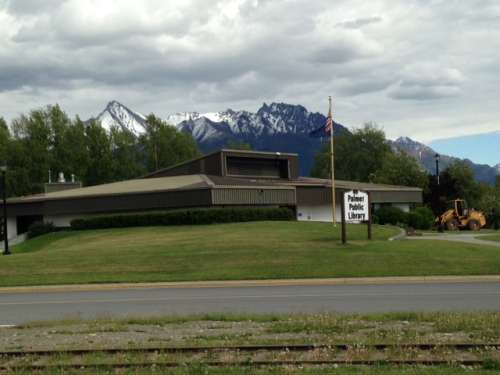 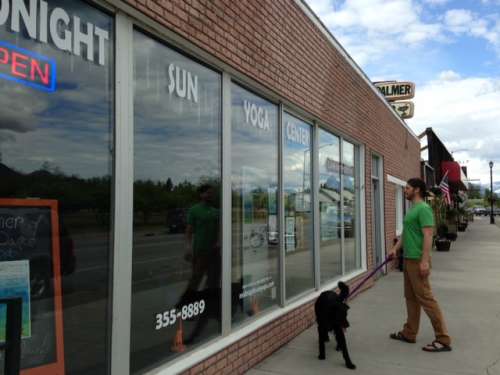 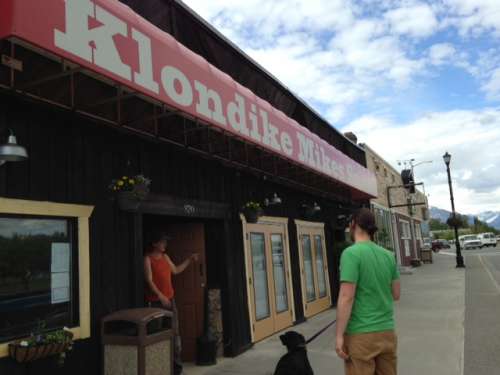 Klondike Mike’s Saloon–used to be owned by the hay farmer at the farm I lived on last year. Rural towns are great for small world scenarios. 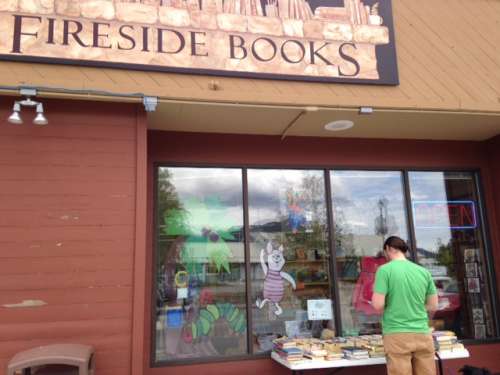 Fireside books has all of the latest reads as well as local writers. 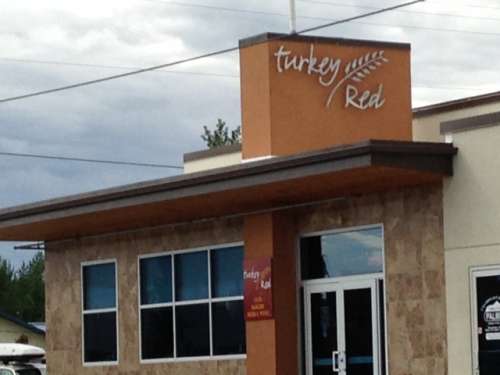 Turkey Red is the fancy restaurant in town–Sun Circle Farm (where I work now) supplies delicious produce for this place! 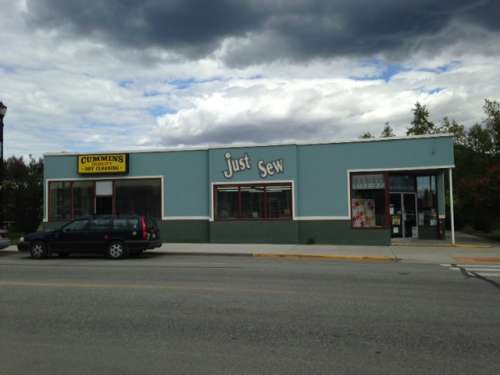 There is still A LOT I don’t know and will never know about my own little part of Alaska, but I do know that Palmer is a remarkable town.  It is progressive while staying proud of its past.  It is home to small, independent businesses and it questions–or even opposes–chain store development.  The post office has the hugest section of P.O boxes I’ve ever seen; and the library, while not huge, is part of a very thorough library system.  There is one nice restaurant in town and a couple of cafes that offer great morning and afternoon fare.  The local independently owned bookstore hosts local authors for signings and readings, and there is a yoga studio sandwiched between a couple of bars.  There are even a couple of shops that go beyond antiques and sell revamped old stuff that would make any Farmgirl jealous!  The best part?  all of these amenities are all located on one four block stretch in downtown. 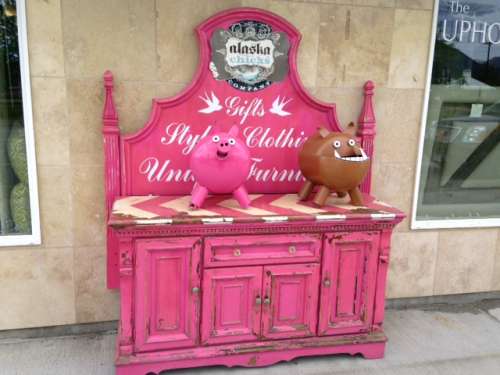 Very girly revamped buffet for all of the pink loving Farmgirls out there. 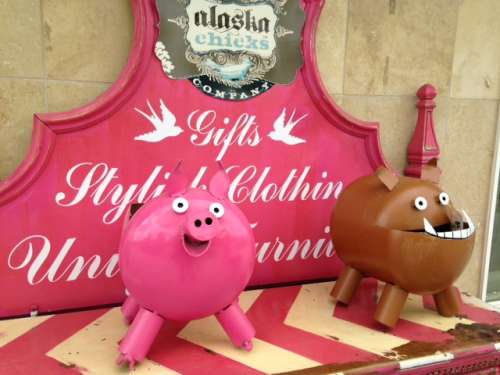 I think these little critters are made from old propane tanks? 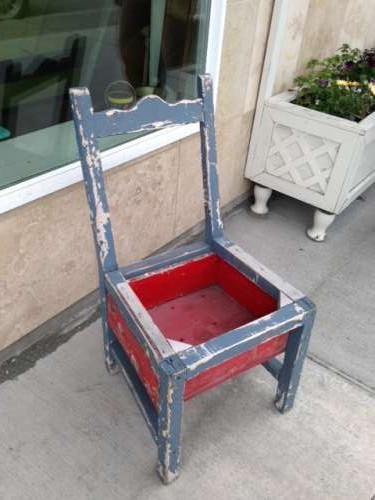 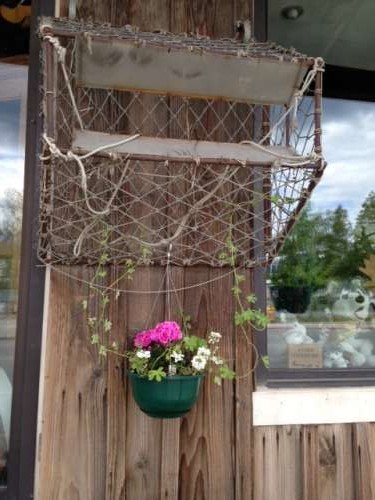 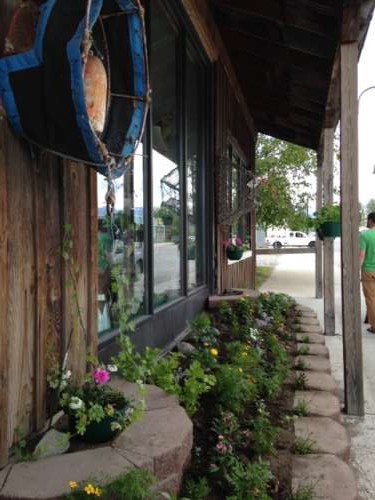 Verdant front to the antique shop.

Outside of downtown there are more staples of rural living: auto body shops, the local animal feed store, the machinery rental place, the random window and flooring stores that make me question how they stay in business, day cares, doctor’s offices and the gas station/convenience stores that are a Godsend to those of us who live more than a couple miles outside of town.

As these long days of summer (today we are at 23 hours and 16 minutes of visible light) go on, I am looking forward to the Colony Days Festival, minor league baseball games and swimming at some local beaches.  The strong agricultural vibe that rules the Valley during the summer is growing stronger by the week and soon side road farm stands will be overflowing with freshly harvested goodies. 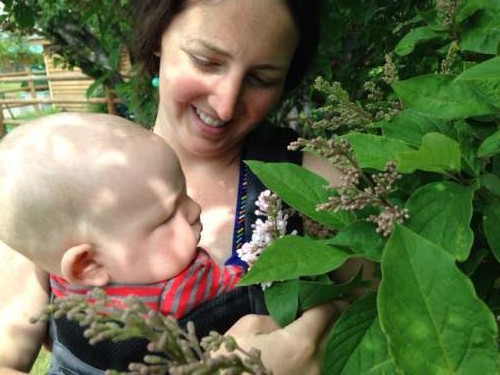 So there it is: I live ten minutes outside of a rural town.  I AM a rural farmgirl!  Life is simple here if you want it to be, but that does not mean it is unsophisticated!  Us country bumpkins can get our asanas on and follow them up with a fancy latte and discussions of current political turmoil if we want to!  This is modern rural, and I’m happy to be a part of it!

What do you think? Do you live in a rural place?  What makes it rural in your eyes?

Until Next time City, Rural, Ranch, Suburban, exurban, travelling and all other Farmgirls.  I hope this finds you well and secure in whatever labels you have for yourself (or better yet–secure without any labels!)