My partner and I have a few silly arguments that we visit now and again–perhaps when we’re out to eat and the conversation is dry.  One is over the meaning of the word “milk.” He grew up on a dairy farm and insists that milk must come from a female mammal.  Any “milk” that is not animal based is not milk, it should be called juice…or something.  Soy juice?  Rice juice? No thanks….Coconut juice?  Sure! But I would expect something different from what I’d get.  My argument is that juicing something is also different than the processes used to make dairy free alternative milks.  We generally come to an impasse and move on.  Recently, he said that he would accept an alternative spelling–M-Y-L-K for the alternatives.  It works for me. 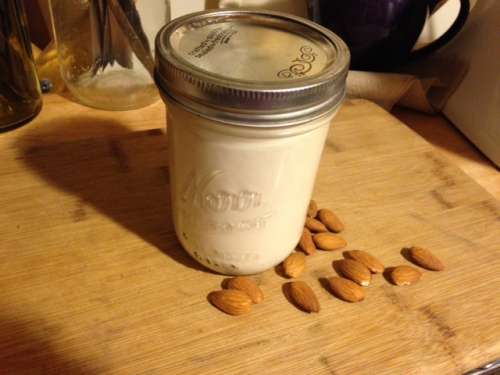 A this very moment I have rigged up a kind of nursing/typing station.  It is ramshackle; I am using an unplugged space heater (it is narrow enough to straddle) and the edge of my Boppy pillow (best gift EVER!).  I’m sure it won’t win me any mom of the year awards, but it works for me in a pinch!  I’ve timed how much time I spend per day nursing and it has varied between two and a half and three and a half hours per waking hour.  This does not include night time feedings! That’s a lot of milk production and consumption.  As a result, I’m very proud to report that Ava has gained almost four pounds, and as many inches, all from my milk factory. 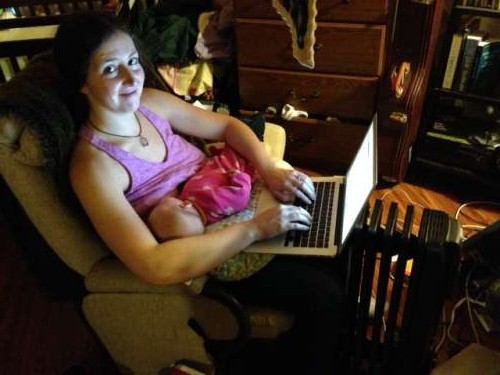 Making it work for all of us!

At around three weeks, Ava started vomiting frequently.  She was also very gassy and her dirty diapers were disastrous.  One of the midwives suggested excluding dairy from my diet, as it is the most common food to cause problems in breastfed babies.  Some people mistake this as the babies being lactose intolerant–but that is crazy talk!  Of course there are some babies that are lactose intolerant, but it is highly unlikely.  Lactose is the main ingredient in breast milk, so this would go squarely against our biology.  It is the cows’ milk proteins that transfer through the breast milk that some babies cannot tolerate.  Since Ava’s development and diaper output were on track, an elimination diet wasn’t even a necessary step, but it could lead to a happier baby and fewer wardrobe changes throughout the day. It can also take a long while for dairy proteins to make their way out of our bodies, so I stopped my dairy intake three weeks and one day ago today (with one mistake that definitely took it’s toll).  Since then, Ava’s condition has steadily improved (but there are still lots of baby toots!). 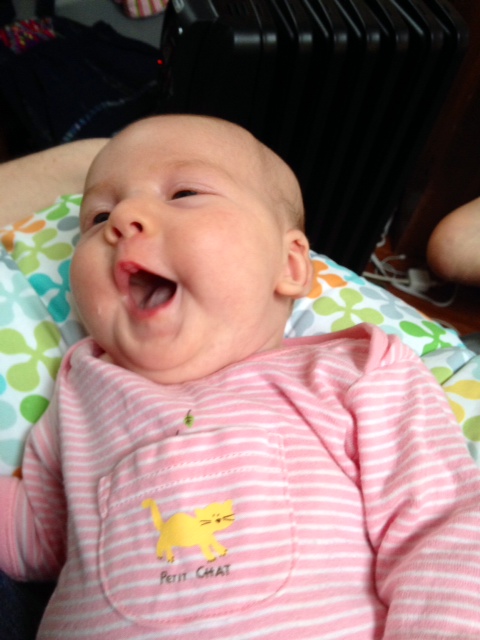 Now that is one happy milk-faced baby!

Needless to say, milk has been on my mind a lot lately.  From making it to consuming it, I bet the white stuff is on my mind a large majority of the day.

Since I am breast feeding, I need to make sure that my diet is nutrient dense and supportive of both my and my baby’s needs.  Milk has always been an easy protein and calcium source for me.  Butter has some good fats in it.  Cheese is just downright delicious.  I like to cook a lot of veggies, locally sourced meats and fish, and a variety of legumes and grains, but I almost always have some hint of dairy in those dishes.  I know there are many claims against the healthfulness of dairy–that it isn’t meant to be consumed by humans, that it acidifies the body, that it actually increases the risk of osteoporosis, that it causes diabetes, and that it makes people mucusy, among many others.  I respectfully choose to ignore these claims.  I don’t believe there is a blanket diet that works or does not work for all people, and dairy has done my body very good over the last twenty nine years.

Alas, for the time being I have to turn my back on all things dairy–and that means ALL things dairy, even the hidden dairy in processed foods…like Girl Scout Cookies.  I learned that after making and eating cookies last week with carob chips (which unfortunately have powdered nonfat milk in them…) and spending the next few days with a pukey baby. 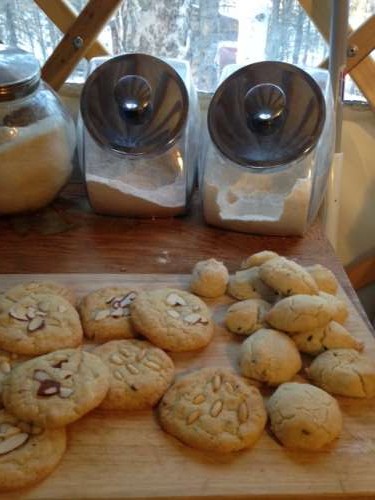 So, I’ve turned to alternative milks and coconut oil for recipes that call for milk and butter.  So far it has worked out really well.  We’ve had cookies, waffles, pancakes, smoothies, roasted veggies, pasta dishes, wild rice dishes and others.  I’ve also just learned to omit cheese from everything.  It’s been hard but worth it.  I’ve actually found that I eat a much more well rounded and healthy diet because I can’t have dairy.  I would normally go for a bowl of cereal or some other super lame and fairly nutrientless snack when I wanted a quick bite to get me to the next meal.  Now I’m eating more fruits and veggies!  I’m eating nut butters and hummus!  I whip up some eggs for a protein boost.  It’s all around a good thing.

I do have one problem though–store bought milk alternatives are full of JUNK!  There’s carageenen and weird gums and it’s hard to find them around here that aren’t full of sugar and artificial flavorings.  So, I’ve taken to making my own almond mylk.  It’s surprisingly easy: 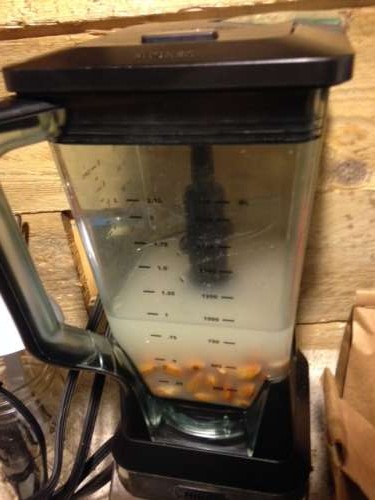 Pre-soaked almonds with new water are ready to be blended! The water turned a bit cloudy bc the almonds soaked a bit longer in the new water after I added it. 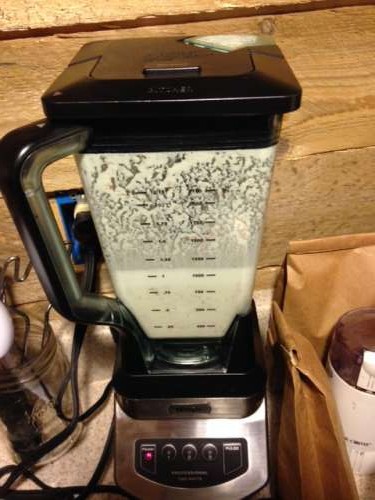 After blending the heck out of the two ingredients: almonds and water. 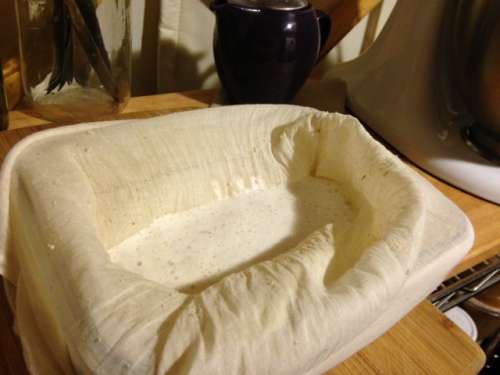 Ready to strain the mixture through my grain bag. 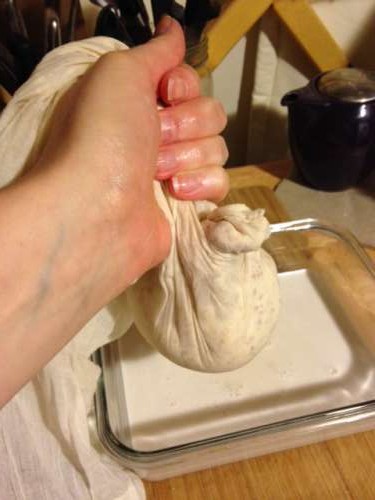 Time to SQUEEZE! Mylkin’ it!

I have found that squeezing the almond mylk out of the almond meal can be surprisingly similar to milking a cow…so now I have that to add to silly mealtime arguments.

Since I’ve gotten into the routine of making almond mylk it’s been kind of fun!  The results are tasty and fresh and prove to work well as a substitute in the recipes I’ve tried.  I think next I’ll try to make my own coconut milk from desiccated shredded coconut…Too bad I can’t get Alaska Grown almonds and coconuts!

And did I mention before that chocolate also makes little Ms. Ava sick? That’s why I turned to the carob chips…but they have dairy!  So I’m also going to try my hand at making my own dairy free carob chips.I wish I could be a person who didn’t need to substitute these foods and could just go without…but I’m not.

As true Farmgirls, we are resourceful enough to navigate our ways through the mess of food options available to us and to make the best decisions in regards to our abilities and our health.  I am thankful for this and hope you are too!  How have you dealt with any dietary obstacles in your lives?  I’d love to hear your stories!