Posted on May 26, 2021 by Rural Farmgirl Alexandra Wilson

Brood (noun): a family of young animals, especially of a bird, produced at one hatching or birth.

(verb): think deeply about something that makes one unhappy.

(noun, informal): all of the children in a family.

From the Old English brod: “to breed”.

Over the years, I’ve had the pleasure of meeting a few kids who have grown up on small scale farms.  A favorite activity is often–“How many mouths are there to feed on our farm?” Even on a small farm, these numbers can add up! A couple acre plot with chickens, ducks, pigs, a horse or cow or two, dogs, kids, cats…even if the animals have a lot of space, can already be in the hundreds-of-mouths-to-feed territory. The count can be especially high if the counters try to estimate numbers of bees in a hive or worms in the vermipost bin. 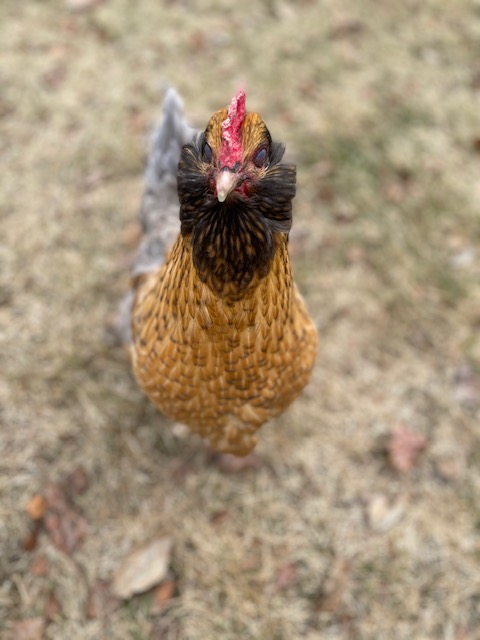 Our current count is 11–six people, one dog, one cat and three chickens.  This number is often higher because there is a pretty constant rotation of friends (and soon family!) circulating through, but I will not claim them as part of “my” brood. We’ve also come to unintentionally (and often frustratingly) feed some of the local wildlife. 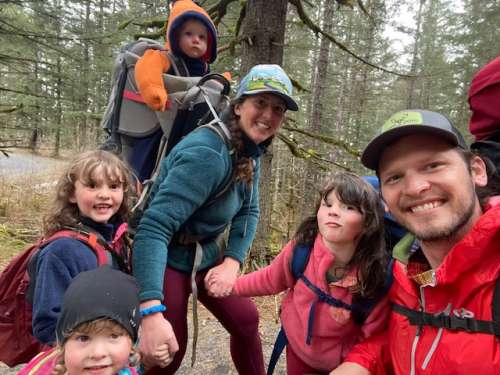 Our numbers-of-mouths-to-feed have dwindled over the past month or so due to one that is not in our brood: our neighbor, the cross fox.  I saw her once…with chicken in maw, heading back into the woods. It was almost funny, in retrospect–I have an anecdote for you. I am still nursing Nova and was late night pumping with a hand pump while doing some computer work.  I heard the tell-tale squawk of a chicken and immediately jumped up to run outside.  Upon turning the corner of our house I saw the fox dashing into the woods with Janis (who had JUST been named not 36 hours before this) and a small fluff of feathers left in the yard. I ran into the woods, too, following the fox and full of adrenaline.  About forty feet into the brush, I realized I still had the pump on my breast! I encourage you to take a moment and imagine a woman running through the forest with a breast pump on yelling at a fox at 10 p.m.  What did I think I was going to do?!  Farmgirl living at its best–taking care of all of the business at once! 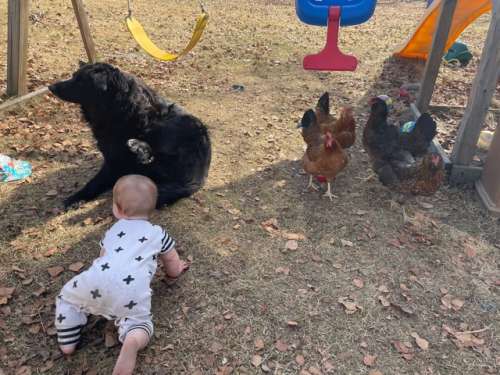 Two of these hens are no longer with us. RIP. Hope you fed some hungry fox kits.

Needless to say, the remaining chickens have been locked up in their coop at 8 every night since then.  The fox ended up getting three hens before all was said and done–two of them in one day.  Last spring we started out with 17 little chicks, and today we only have three hens (gave some away, half were roosters, fox took a few).  I told the kids that the fox is a mama with kits–her own hungry brood of mouths to feed.  I kind of told myself that, too.  The first chicken to be taken was Opal’s favorite, Sunshine.  It was a sad day, but a reminder of what often comes with Farmgirl life.  In a strange way, it is kind of nice to only have three hens. With a set up ready for more than a dozen chickens, they hare living great lives! They have tons of space and never run out of food or water. 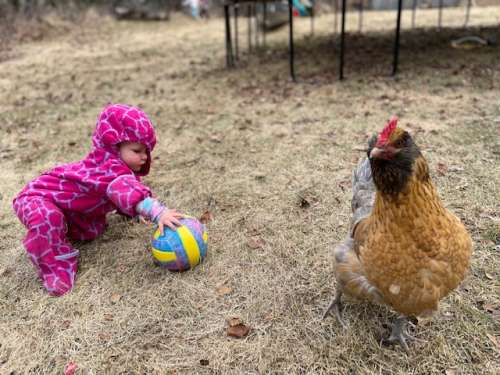 My daughters do love their hens!

The local moose also patronize our yard’s buffet of goodies quite often.  Unfortunately, one of the fares they discovered was one of my apple trees.  We tried to protect it with a small enclosure, but I could not get tall enough T-posts last year.  With the snow this winter, the moose easily ate right over the top of the fence!  The tree will survive and is leafing out on the remaining “branches,” but it’s a bit sad at the moment. 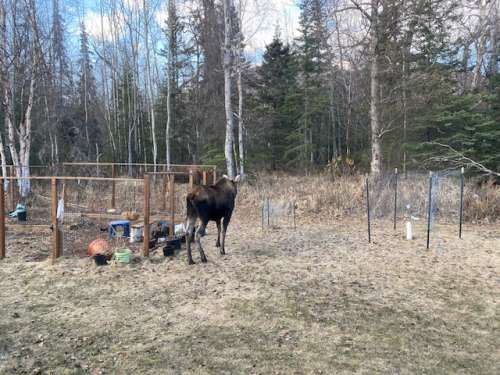 Did YOU eat my apple tree?

So, while we are feeding our own and also providing food for the passing wildlife, I still dream of more little creatures to populate our plot of land.  Last fall, I seriously thought about getting a couple pigs to help clear some land for future garden space and fill our freezer for the winter.  Every spring, I peruse bee keeping supplies and consider the best spot for a couple of hives.  With our dwindling flock of chickens, I’ve been eyeing the chicken pages for pullets.  What about some Guinea fowl? What about rabbits? What about a LLAMA or YAK?! Okay, okay, i’m getting away from myself here. 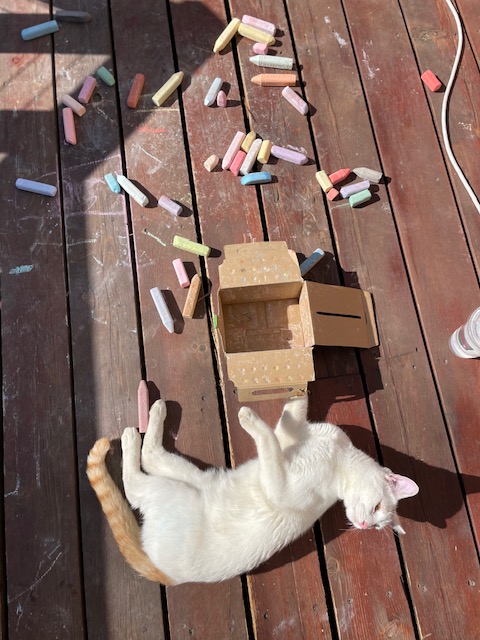 This guy has been a bit more trouble than anticipated. But we love you, little Lenny Clawvitz.

While we don’t have too many mouths to feed here these days, some of them are a bit demanding (hint: it’s a couple of the human ones).  Being a Farmgirl at heart and a mama to young ones is both immensely rewarding and often difficult.  The pull of tending to animals and plants can (and does) come into conflict with the disrupted sleep, seemingly constant hunger and demanding social and emotional needs of young children.  I think it’s really formative and important for children to tend to other living things.  The health benefits of being exposed to animals are numerous.  The exposure to life and death help those realities become less abstract. However, while the daydreaming of growing our brood continues, I’ve made a new motto for life at the moment: “Not this year.” It’s time to ensure we can take care of what we already have before adding more. 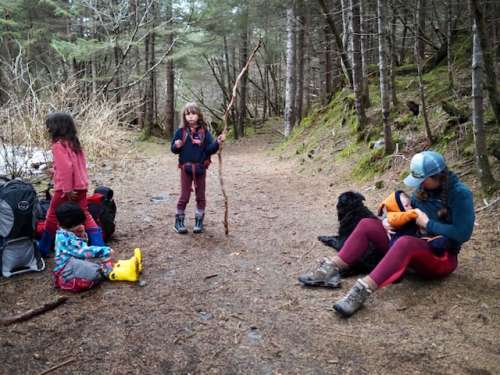 Perhaps next spring will bring with it some new fluffy chicks, some humming beehives, and maybe a LLAMA (probably not…but a girl can dream!).  It will be fun to see what animals the kids plead for as they get older (Opal really wants Guinea pigs at the moment).  Will they raise 4H animals?  Will they love reptiles or other non-traditional domestic animals? Will they poo-poo the responsibilities of care-taking for other creatures altogether?  With four very caring, attentive, and animal-loving daughters, I’m sure we will have some fun creatures come into our lives over the coming years.  Our brood is sure to grow!

Do you keep any farm animals or other domestic animals?  or have you in the past? Please share your adventures in animal keeping with us.  It is great to live vicariously through others while day dreaming about future possibilities. What does your brood look like these days?

I hope this finds you all well in your corner of the world.

Leave a Reply to Karen Pennebaker Cancel Your Response