Good news, we think the comment feature is fixed. Whew!

As it turns out. Well…It could have been…”operator error.”

I’m not surprised. I have a curse, a hex, a jinx when it comes to computer programs.

Won’t you try the comment feature at the bottom and tell us what your favorite dish is that you make with plain old white potatoes?

One of my favorites is a big, perfectly baked potato. I add butter, sour cream, grated cheese, chives, salt and pepper. And maybe some crumbled bacon. Mash it together with a fork. And enjoy while it’s piping hot. Hot potato.

Read on for the secret to a the perfect baked potato every time. Or if you’re in a hurry, skip down to “Seven Potato.”

(The plural problem never bothered me until now. Two “potato”? Where’s the “s”?)

“I bought a big bag of potatoes and it’s growing eyes like crazy. Other foods rot.

Bill knew what he was talking about. Potatoes do indeed want to see.

You buy a big sack of potatoes, far too big for your small family. You buy it because it’s on sale and cheaper than the smaller bag. You know you can’t resist a bargain. Ever.

On you way home from the grocery store you recite in your head the list of things you’ll do with the huge sack of potatoes in the backseat – hash browns, potato salad, mashed potatoes, latkes, um…. what else? Baked potatoes, boiled potatoes, roasted potatoes, sautéed potatoes. And that’s it. You’re out of ideas. 10 pounds of potatoes and only 8 ideas.

Those 8 ideas run out fast. Way before the potatoes do.

Next thing you know the potatoes in your pantry are growing eyes, wanting “to see,” as Bill said. But it’s dark in your pantry, so not much for them to see there.

And then green shoots pop out of your potatoes. You hate to toss them out. Maybe you’ll cut around the shooting green eyes and use the potatoes still. And truthfully, you do still EYE them. You do still consider them. When you look in your pantry for something to make for dinner you do notice those aging potatoes. But without fail, because of the eyes and the shoots, you pass them by as you reach for a can of green beans or bag of rice. Soon you don’t even notice the potatoes any more when you look into your pantry for dinner. (It’s the same thing that happens to junk in my house. It fades into the background; I don’t see it anymore…until company is coming.)

And then one day.

You get home from work, open your door and smell that awful smell. What could it be?? Did a mouse die in here? You look high and low for the source of that odor.

Suddenly you remember the old bargain potatoes in your pantry, with the eyes and the sprouts.

You go into the pantry and P-U! That’s it. Several potatoes have rotten. Now you can (finallly) throw them all out. But the smell lingers.

And you vow to never again buy 10 pounds of potatoes no matter how cheap they are.

Until you forget your vow.

Another potato saying, this one not from Bill.

(Or if it is from Bill he gets no credit for it. Anonymous does.)

“The same boiling water that softens the potato hardens an egg.”

It’s about your substance, what you’re made of, not about your circumstances or environment.

See? It’s not the water, it’s me. I can’t change the fact that every now and then I’m stuck in boiling water, but I can change what I do about it.

I used to work with someone whose son was called Tater. I assumed it was a nickname but was never sure. I like taters and eat taters and sometimes grow taters and bake tater tots. But as a name? I mean, you just know that through-out his elementary education and maybe on into high school, he heard through-out the school halls, “MR TATER HEAD!”

Of course, what anyone chooses to name their child is not for me to approve of or not approve of. People can call their children and each other whatever they want to with no interference from me.

Now that I think about it.

Me sharing my opinion about Tater’s name just goes to show that I have been sucked into the idea that I need to have an opinion on everything. And to share that opinion. 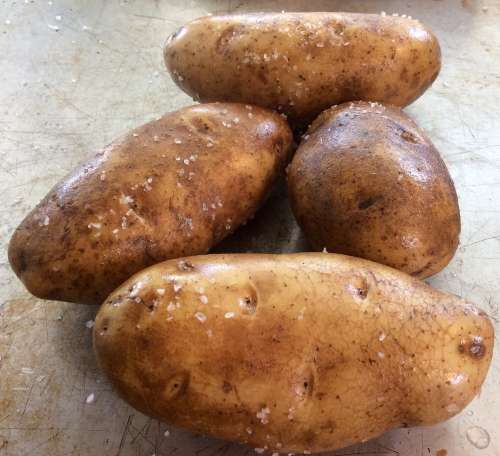 Phrase heard in every Waffle House in the land

There’s an all-night breakfast restaurant chain in the south called the “Waffle House.” The nickname is “Awful Waffle,” but it’s not awful. It’s yummy. And it’s open 365/24/7. Just to give you an idea of its popularity, there are 3 Waffle Houses in my area. 3.

Wikipedia calls the Waffle House a “regional cultural icon.” I do not disagree.

I helped harvest a field of potatoes one year. It looked like fun as I drove by my farmer-friends and their families down on their knees in the potato field. They were filling 5-gallon paint buckets with potatoes. I stopped by and volunteered my services.

The tractor had already loosened the earth to release the potatoes beneath the surface. The job involved running my hands through the dirt to find and gently harvest the potatoes. I  harvested even the small (rejected ones) and placed them in my own bucket, compensation for my labor. The kids worked quickly and efficiently, filling their buckets — no belly-aching (that’s southern for complaining.)

There are many more reasons.

“It is a mistake to think you can solve any major problems just with potatoes.”

I’m not so sure about that, Douglas.

I think a lot of problems can be solved by sharing them with listening and caring friends. I think it’s even better when sharing a cup of tea, a glass of wine, a fire, or a meal of a loaded baked potato. Friends and comfort food? Yeah, that solves a lot of problems.

I had a special conversation the other day with a special friend. We talked about how it helps lighten your load of problems when you share them with a friend you trust. There is healing magic in talking things through. Keeping them tightly locked inside and putting a fake smile causes stress and headaches and stomach aches and insomnia.

So, reach out to a friend.

And make her a baked potato?

When was the last time you had a loaded Baked Potato for dinner? I am happy to say that I know the secret of a perfect baked potato every time. 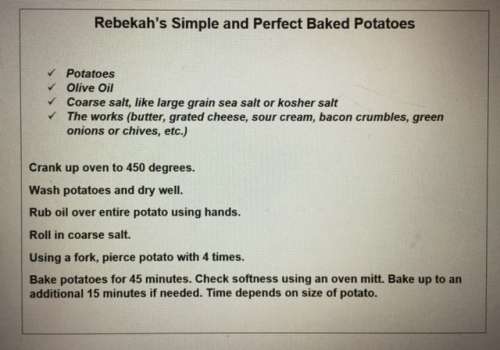 I see the type-o in that recipe now. After all this time. “Pierce potato with 4 times.” Oh well, you know what I mean.

Remember the game HOT POTATO from your childhood?

You pass a potato around a circle of people, getting rid of it as quickly as possible.

You don’t want to me the person who has the potato when the music stops. That person loses.

As kids we played that one at every birthday party. Oh, and also “Button, Button, Whose Got the Button.” Remember that one?

Gah, life was simple then, wasn’t it?

I wonder what happened to make things so complicated.

Oh, I know. It is probably social media’s fault!

Don’t forget to leave a comment and tell us your favorite dish to make with white potatoes.