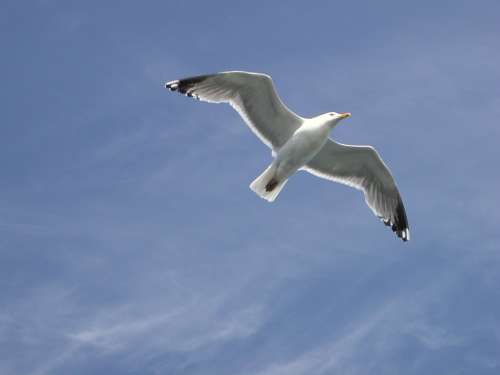 Let me just start with saying that January and February have been quite momentous around here! Our oldest flew the nest for sunnier shorelines on the West coast at the end of January and our youngest just celebrated her 21st birthday. This momma is feeling so many emotions I might as well be riding a roller coaster at Disneyland! I know some of my sisters can relate. How did you cope when your chick’s flew the coop?

One minute I’m feeling excited and happy for all the wonderful new experiences our son is having and the next minute I’m waiting for him to come in from work or come downstairs to say good morning. To say I’ve been a ball of emotions is putting it mildly. 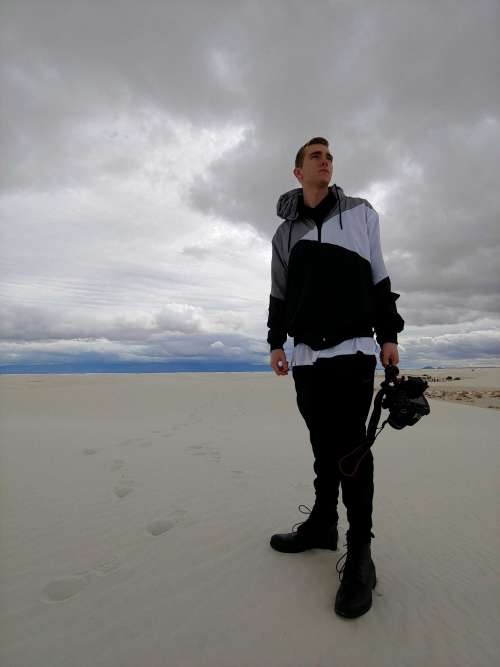 Zach with camera in hand, scouting scenery for footage for a future music video in White Sands National Monument

There have been some changes here since he left. For one thing, the house is quieter. He always turned on his music first thing and by that I mean, music he had produced in his home recording studio. I had grown accustomed to the sound of smooth R and B tunes as the soundtrack to my days. They became a signal for letting me know that he had started his day. I loved popping my head into his room and watching him at work.

More than the quietness, it’s his absence that I feel the most. I can turn on his music anytime and listen to him sing, but I can’t give him a hug, just cuz, or rub the top of his 6’2 head when I feel like messing with him.  I miss seeing his smile and laughing at silly things together. I miss hearing about his day and listening to his comedic monologues. But when I really get to missing him, deep down in my bones, I  stop and smile because I realize that I am one lucky mom to have raised such a neat young man who so many others look up to and I feel grateful and pleased.

Zach worked in the hospitality business which means he worked mostly nights. That gave him time during the day to hone his craft. I’m pretty sure I heard everything he’s ever produced before he sent it out into the universe. That’s quite a privilege in my book!

Young adults leave home for so many different and interesting reasons. College, travel, relationships, career, the Service, marriage, parenthood, religion, and on and on. Some studies say that children are living at home longer today than at any other time in modern history because housing is more expensive and combined with the high cost of living in some areas they simply can’t afford housing costs and expenses unless they have a well paying job or share housing with roommates. Zach and his girlfriend share a house with three other housemates all in their twenties and early thirties. In many ways I think it would be a great way to live while you’re young and UN tethered by lifelong commitments such as marriage and family. There will be some life lessons built in there, for sure! I can’t help feeling exhilarated for both of them knowing they have so much to explore together. It reminds me of my handsome Yankee and I when we began our life’s journey together. We were full of hope, with big ideas and dreams. Apartment living, long weekends exploring. Camping, hiking, mountain biking, canoeing, cross-country skiing, swimming, and traveling.

Zach didn’t leave home for college when he was 18. He continued living at home after he completed his homeschool years. He worked full time, saved his money and dedicated himself to his passion for making music. He’s 23 years old now! A full grown man with hopes and dreams and the courage to go out there and see what he can make of his adult life. My handsome Yankee and I couldn’t be more proud of him and the young lady he is sharing his new life with in California. They had been dating here in New England for some months, but she had set a plan in motion for her move West before things got serious between them. After she moved, Zach went out for a visit and when he came home he announced that he was going to move out there to be with her and pursue his music. That was back in October and on January, 31 he and my hubby packed up his car and they headed west on a cross-country adventure. They have both driven across country before, but never together. My heart was ( and still is ) so happy they got that UN-broken Father and son time together, rolling down the highway with long stretches of road before them.

They made a point to stop and see some of the worlds natural wonders along the way and I loved getting the photo updates in our family group text. Here are a few they shared with my mom, our daughter and I. 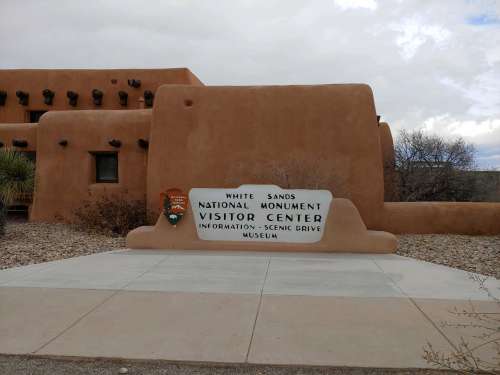 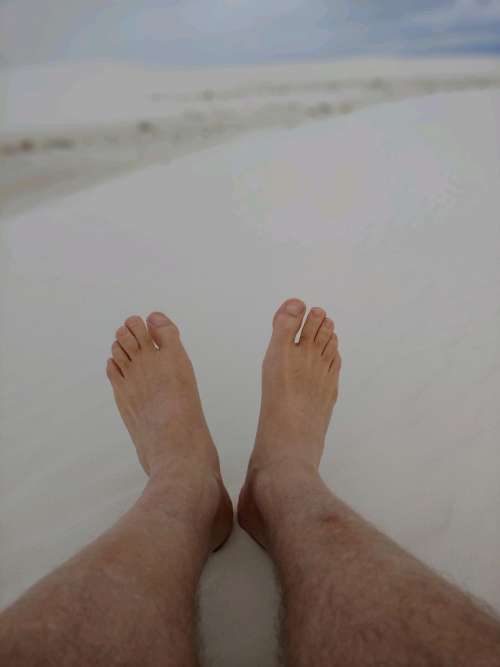 My hubby tried to fool me into thinking they were at a beach but, there are no white sandy beaches in New Mexico. There are however, 275 square miles of white gypsum sand dunes in White Sands National Monument. The worlds largest gypsum dunefield. 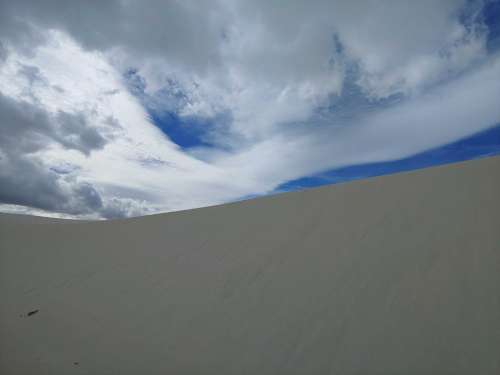 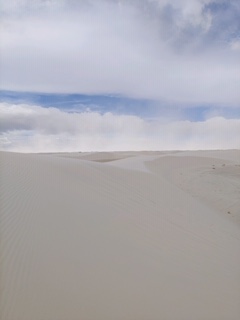 While still in New Mexico, they also stopped to take in a tour at Carlsbad Caverns National Park.  Here’s a tour schedule for March if you’re in the area! 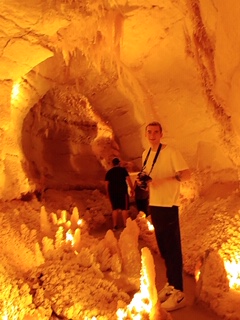 A guide led them through a two hour tour of one of the 119 caves there.  Be sure to check out the links above for more info on this amazing natural wonder. 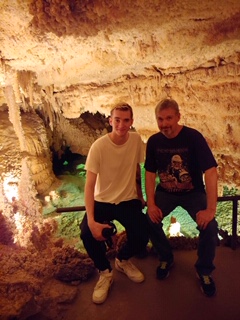 At this point in the trip the end of the line was in sight. The finally arrived in San Diego after 4 days on the road. 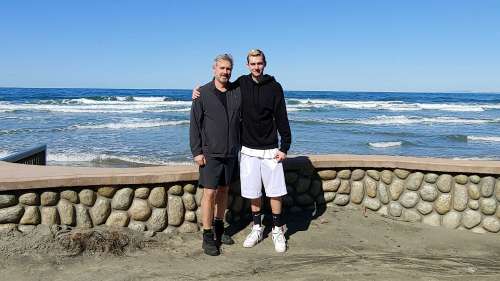 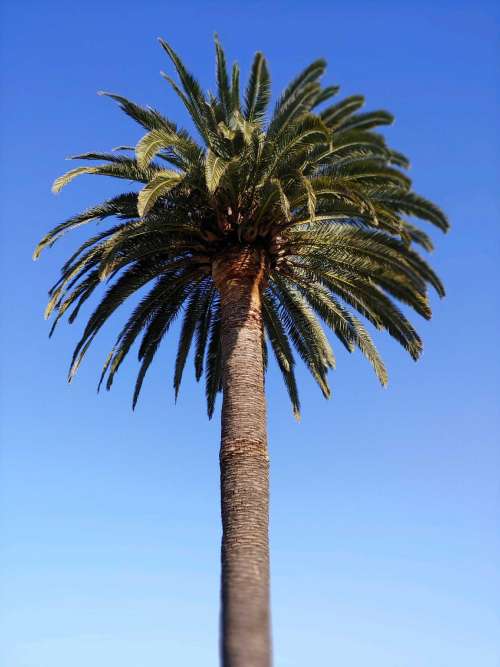 My hubby texted me after Zach dropped him off at the airport. ” That was hard “. I started bawling. Shortly afterwards I received a text from Zach letting me know he had dropped his father off. ” I’m on my own ” he said. More tears…and they just kept coming.

While I was drying my tears here at home, my hubby flew into Reno for a quick visit to see some of our family and friends. I have aunts, uncles and cousins there that we are very close to. This was just the boost he needed after that gut wrenching goodbye and it filled my heart with so much joy knowing he was in the arms of family laughing and having fun!

Seeing him with all of them filled my heart to the brim! Look at all those smiles! 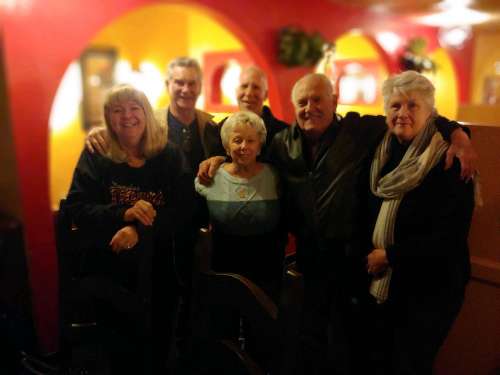 He even went to eat at our favorite Mexican Restaurant where we ate with these very same people on our wedding day 28 years ago! 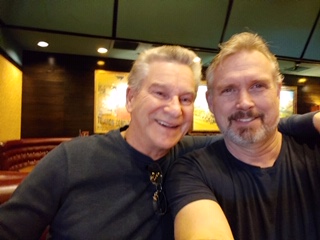 Uncle Larry and my guy. 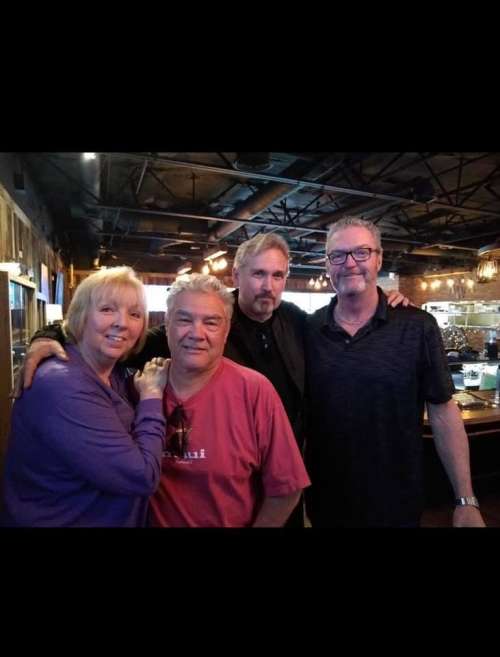 My cousin, Denise, her hubby, Don, my guy and my cousin Dennis at his restaurant the Hard Water House in Reno. Stop in for a whisky and a burger and say howdy next time you’re in town!

It’s been a month and the beat goes on here. I’m busy with my floral work, writing, and planning the gardens for this season. Wedding season is also coming around the corner and I’m excited to be working with some amazing couples who are embracing the local flowers movement. This mamma’s going to be busy, busy making things pretty!

I keep telling Zach that I’m going to paint his room pink for my new office/guest room 😉 I think I really have him worried I’m gonna do it. I just might! What the heck, it’s only paint!

Zach is settling in. He’s got a new job and snazzy new California license plates. We talk a few times a week on Face-time and text every day. How did people endure long separations in the olden days without Face-time? I’m grateful such technology exists today.

I think it’s ironic that he was born in Nevada, then transplanted to New England with us when he was 5 years old and has ventured out West again to begin a new chapter in his life, keeping this crazy game of coast to coast ping-pong going in our family.

Like my mother-in-law used to say when we lived out West.  “Now we have some place new to visit! ” You can bet your farmgirl overalls we’ll be planning a trip West soon!

Tell me how you managed when your chick’s started flying the coop!

Were you ready? Were they ready? Is anyone ever REALLY ready?

Until our next shoreline visit~ Hug your babies and your big kids too!

BEACH BLESSINGS AND MUCH LOVE!