Hey Farmg—wait, did you feel that?!

No?  It was an aftershock.

An aftershock to a pretty big earthquake we had in Alaska a few weeks ago.  You might have heard about it on the news? 7.0 with the epicenter about forty miles from here

To put it mildly: it was terrifying and awful and discombobulating.  After lots of reading and discussing and studying, I can imagine being in a bigger one and I hope it is something you or I or anyone never has to experience. We are finally feeling pretty recovered after a few days of adrenaline hangovers, a week of high stress and another week of trying to return to normalcy.  I questioned a few times if the lingering anxiety would ever fade, but with time and less frequent aftershocks it has subsided. 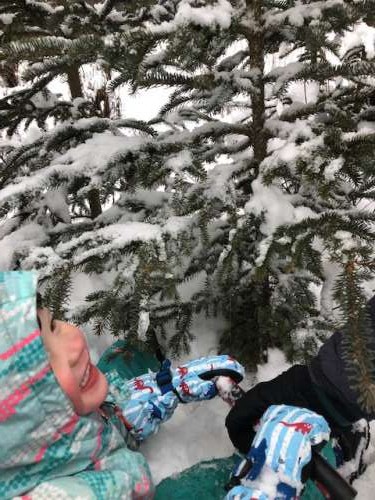 A birthday walk in the snowy woods to find our tree took a lot of the edge off of the ‘quake anxiety.

I like to think that I generally have a healthy level of respect for mother nature and natural disasters.  Growing up in the Midwest, I spent good chunks of time learning about and preparing for tornados or floods or huge blizzards or droughts or fires…but earthquakes are something that were always so foreign to me that I never really considered that I’d be in a “big one.”  In retrospect, this is silly because Alaska is one of the most tectonically active places in the world.

I experienced my first earthquake shortly after we moved here.  I was sitting on the floor and it shook, but it kind of felt like a big truck driving by or someone dropping a full bottle of shampoo in the shower. Sure enough, it was a small earthquake.  I don’t remember the magnitude, but it was probably in the high 3’s.  Since then, we’ve experienced countless small earthquakes.  Alaska gets about 40,000 earthquakes per year! However, most of them aren’t perceptible.

When we sat down for breakfast on November 30, I expected it to be like any other morning.  It was a school day for Ava, and that can get stressful with getting out the door on time for drop off.  At about 8:28, I declared, “We are not going to have a stressful morning!” and raised both arms in the air in a sign of determination and success.  Then, at 8:29 it started to roll.  The first ten-ish seconds of an earthquake aren’t that alarming, it’s kind of a “is this going to keep going?” feeling. I’m pretty sure I heard it coming first, as that is how I’ve experienced many earthquakes, but I’m not certain.  I had put the girls’ snow clothes in the dryer to take care of any lingering dampness and warm them up before a morning of fun in the snow, so it’s likely I didn’t hear anything coming over the tumbling of the dryer.

After the first few seconds it was apparent that this earthquake was not ceasing.  Luckily, all three of the girls and I were within arms reach of each other around the table. Right before it started, Opal stood on her chair and as everything shook the girls instinctively came to me, I heard Ava yell, “go to mama!” as I stood up and tried to undo Fern’s highchair straps.  Alas, they are impossible to undo even when not in panic mode.  I couldn’t sacrifice any more time not protecting the other girls to undo them so I gathered Ava and Opal around the high chair and under me as a “mother-birded” over all three of them, protecting their heads and backs under my arms and body in case the glass windowed patio door we were near broke

Things were crashing all over the house as cupboards fell open and dishes, pictures, plants, books, bottles and containers spilled out.  The glass encased lights above the table (and very close to us) were swinging all over and the fruit basket swung like a huge, inefficient pendulum above the sink.  I only remember thinking a few things: the dryer is still going, it will be okay, everything is fine, the dryer is still running… and please don’t shatter patio door, please don’t shatter and when and how is this going to end? I don’t remember what or if I said anything, but I hugged those kids very tightly under me.  I could see Fern’s face and she looked so scared with big wide, confused eyes. 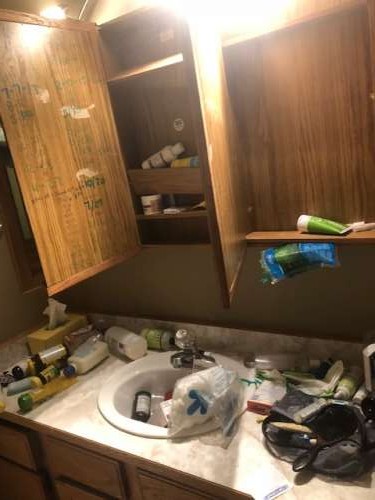 Forty-five seconds to a minute is a very long time sometimes. This was definitely one of those times. When it was over I yelled out–excuse my French–“Holy S—!” in a crazy adrenaline fueled voice that I can only remember hearing come out of me two other horrible instances in my life. I was shaking uncontrollably as adrenaline coursed through me, but I managed to undo Fern as I instructed the girls to stick close.  There was broken glass all over the path between us and the living room, so I brushed it back with my socked feet before removing the socks and guiding us all to the middle of the living room where nothing could fall on us.  After comforting the girls, briefly explaining what had just happened and telling them (and myself) that we were okay and reassuring them I was there to keep them safe, I called Evan.  He was in Anchorage at work.  He works on the third floor of a mall and I was kind of worried.  My call didn’t go through. Then there was a 5.7 aftershock. 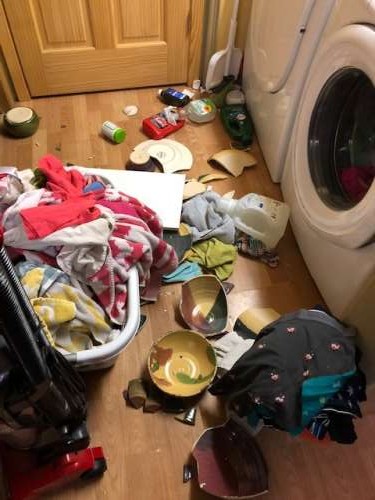 Next, I looked out the window and first noticed that the red lighted “JOY” sign on one house had fallen and was dangling, crooked, in their window.  Next, I noticed that my elderly neighbor’s garage door had opened and their house alarm was going off.  These neighbors asked us to watch their house while they are gone for the winter.  Feeling like I had to help somehow, I decided to call them.  “Everett–Hi, it’s me Alex from across the street, we just had an earthquake….yeah, I think it was pretty big, your house is probably going to be a mess.  Your garage door is open and your house alarm is going off….yeah, okay, yeah, I can do that, I can run across the street and close your garage door, sure.”  Mind you, I’m half cry-sobbing and talking at this point, still surging with adrenaline.  So, I put on boots and run across the cul-de-sac, leaving the girls at home (what was I thinking?!?).  The garage door wouldn’t close, I imagine something had fallen in front of one of the sensors.  While I was there, we had another 5 something aftershock and I sprinted back home.  My poor girls were home alone for that one–something that caused me a lot of distress in the following days.  I called back Everett and told him I couldn’t get his garage door closed, but I’d try again later if it was still open.  Finally, I got ahold of Evan and texted my family to let them know that there had been an earthquake and we were okay. 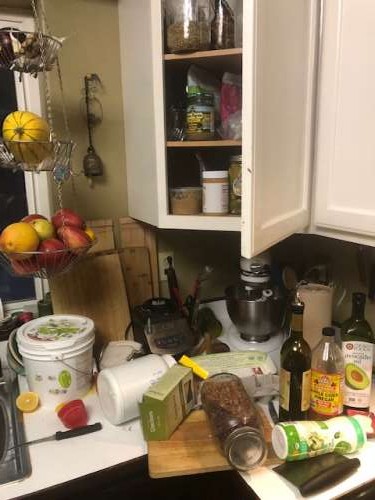 broken and spilled food and oils

As the news got out I got many calls and texts to make sure we were okay.  The girls stuck to me like glue for awhile as I tried to figure out what to do and navigate the intense emotions and thoughts that come in the aftermath of something like this.  It was a strange combination of fear, relief, and a need for action.  My good friends stopped by to help clean up major broken things and check on the water and gas lines in the house.  They are angels!  A huge picture shattered at the top of the stares, sending glass down the hallway and stairway.  Effectively cutting off our access to the upstairs.  Some amazingly beautiful pieces of pottery that Evan’s parents made us were broken, as well as some mugs, cups, bowls, plates and wine glasses.  Some oils that I had been infusing with herbs fell out of cupboards, spreading in fragrant green puddles across the kitchen counter.  Cosmetics covered the bathroom counters and floors.  Everything on shelves and window sills upstairs fell down. Evan was pretty much trapped in Anchorage.  The buses were cancelled and the road was badly damaged, causing the commute to take those with vehicles five or more hours. He ended up chartering a plane from Anchorage to Palmer. 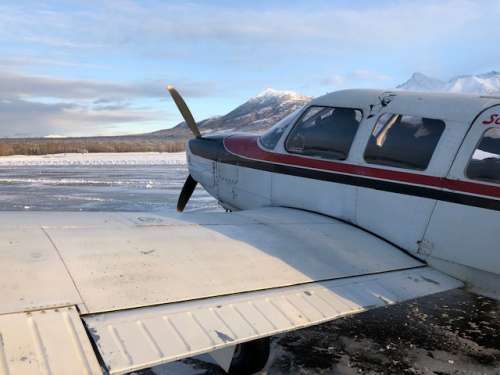 Luckily, no one was gravely injured or killed. We only lost some things and our house sustained no structural damage.  Other buildings were not as lucky, and some roads were badly damaged. It was the emotional and physical toll of the earthquake that I didn’t anticipate.  The aftershocks kept everyone on edge for the first week following the earthquake.  No one was sleeping well.  Everyone was distracted and experiencing strange “sea legs” sensations as small aftershocks seemed to continuously erupt.  There were many funny memes circulating about how zombie-like everyone was.  In the news following natural disasters we hear of the construction work and the heroic or tragic stories of those involved, but we don’t hear about the mundane general anxiety that the affected population experiences. 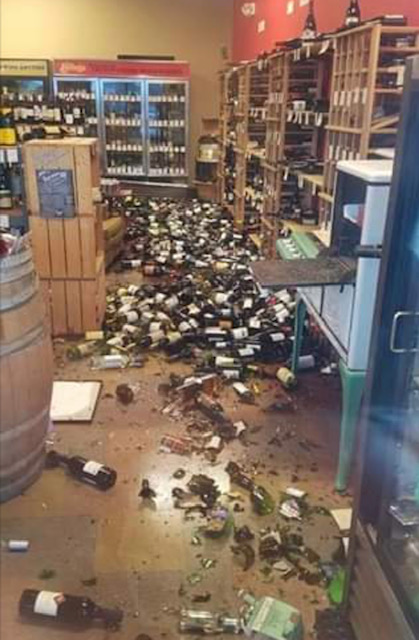 I had never been so aware of the ground beneath my feet…of the small space that I occupy on this planet.  That heightened awareness has mostly lifted, and I’ve finally stopped pausing at the feeling of the furnace kicking in.  In all earnestness–I could feel my heart start to race even if it was just the dog climbing off of the couch.  I could hear the bigger aftershocks coming before they hit, and I was sensing earthquakes that I never would have noticed before.  It was kind of neat, that keen sense of connection with the ground…but I’m glad it has passed! 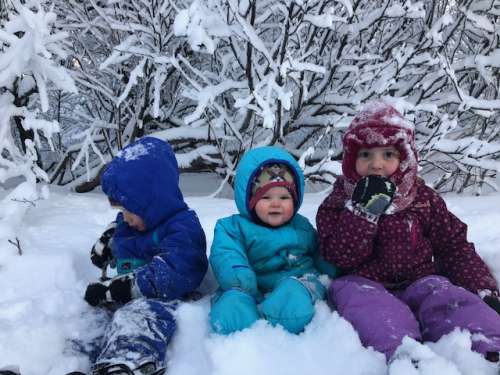 A little time in the snow makes it all feel a lot better.

That first week was hard, but things are pretty much back to normal now.  The aftershocks keep coming, but their magnitude and frequency have steadily declined. The kids still infuse some of their play with Earthquake themes.  Both Ava and Opal call them “Earthquicks” which I find eerily adorable. Opal describes it as a “big shake! and mama go-ed over us!”.  We are all much more up to speed on what we should and shouldn’t do in an earthquake (do go under tables and hold on, do not run across the street leaving your children unattended, going under a door frame isn’t any safer than other parts of modern homes, stay clear of things that can fall, look for an adult if your parents aren’t around, protect your head and neck). 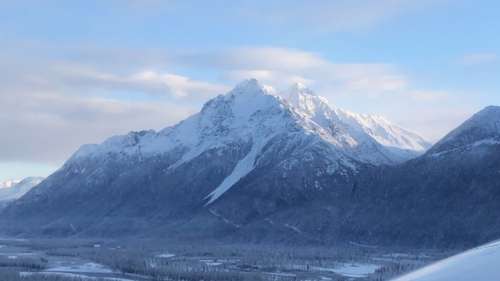 Evan’s view from his aerial commute. The higher up on Mountains people lived, the better they fared–more land mass means it’s harder for the earthquake waves to maintain their magnitude.

Some interesting things of note

-The snow on tree limbs didn’t fall off during the earthquake, the forest appeared untouched

-The bears at the wildlife rehab center woke up and are grouchy–did the bears in nature wake up too?!?

-After seeing other’s photos of fallen stuff in their homes, I realize that we don’t have nearly as much stuff as many people (but we still have too much!)

-It was a very bad day to be a wine bottle.

-We have had nearly 5,000 aftershocks since the 7.0, but most of them are very small

-Earthquakes are considered aftershocks until the quake activity returns to what it was before the “big one” this could take a couple of years. 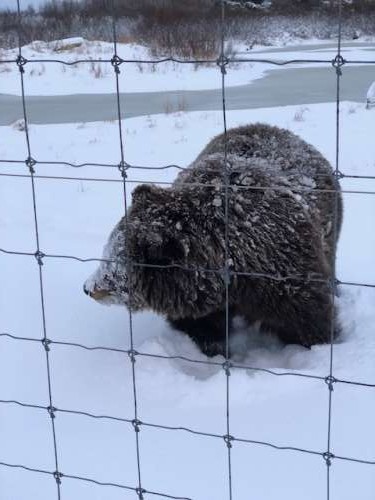 Go to sleep, bear. Photo by Evan from a Dec.12 volunteer trip to the rehab center.

Since the earthquake we have gotten a lot of snow which this winter loving farmgirl is enjoying!

Here’s to hoping that none of us ever go through major natural disasters!  They are not fun, and farmgirls just want to have fun…or something like that :). 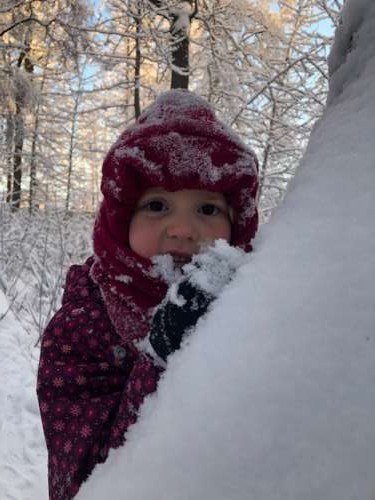 Solstice is coming, and this little forest fairy is ready for some celebration!