warning: this post contains only words, no photos. You see, I didn’t take my phone; I took my eyes and head. I’m such a radical. E-radical. Eradical. And it was dark, so…

“Happiness is a form of courage”

He wanted to go out.

So I went with him outside into the dark night.

FARM night is much different from CITY night.

FARM night is much different from SUBURBAN night.

It’s been awhile since I was out and about at this hour.

I had forgotten about the magic that swirls and twirls around the night air.

Moonshine. Named such because it was made under the cover of darkness, by the moon’s light.

Moondance. In my head: “It’s a marvelous night for a moon dance…” (Van Morrison, Michael Buble, me.)

But the large maple trees do. Their leaves sway gently in the cool, crisp breeze. I see them, but I also hear them doing their moondance. Rustle, rustle, do the rustle. *hustle* I still remember the steps to the hustle. But I don’t do that either.

Instead, I wander over to the big red tobacco barn where my barn quilt hangs. We keep white lights on the roof-line all year-long. They are off now. They’ll come on again tomorrow night at 8:45. Always makes me happy to see the lights shining when I drive up to the farm at night.

Five years ago, I’d have been nervous out here. I’d have thought about snakes under my feet and bears in the woods behind the house and coyotes on the hill and the wild big cats we call “panthers.” I’d have been alert for boogie men, ghosts, and everything creepy that goes bump in the night. I’d have hurried Blue along so that we could get back inside the safety of a roof and four walls.

After living on a farm in the middle of nowhere for five years, I am braver than I was. I know now that I can handle anything. I ain’t ‘fraid of…nothin’. Okay, maybe I’m overselling. I am still afraid of snakes. A lot.

If you ever wondered whether the big frogs in the pond and the little frogs in the trees  stop their loud croaking at 3:58, the answer is no. Their voices or legs or whatever they do to create sound was loud.

If you ever wondered whether the lightning bugs have stopped their twinkling and blinking at 3:58, the answer is no. Their golden lights flash in the branches of the Christmas trees we grow, in the tops of the tall grasses in the meadow, in the black walnut orchard. The night is full of their twinkle. Seeing fireflies always makes me feel happy. Maybe it’s a nostalgia for a simpler, quieter, easy time of childhood.

There’s nothing quite like this. The quiet and noise of the early morning out in the country.

A truck goes down the road in front of my house. I wonder if the driver is coming home or headed into town. Either way, I’m happy to be standing in my yard contemplating “night” and “darkness” rather than in my own truck, hurrying somewhere.

A bat flits erratically overhead. Is a bat’s flight pattern so crazy because they are blind? Or because they catch every mosquito in their vicinity?

I catch a whiff of a something incredibly sweet. What is in bloom? It reminds me of gardenia, but our winters don’t let us smell gardenia in these mountains.

In the hot, humid flat lands where I grew up in Georgia, gardenia was always a favorite of mine. When it comes to flower aromas, there’s nothing as strong and sweet and deliciously heady as the aroma of gardenias. In one house, I planted a whole row of gardenia bushes. While I’ve always loved gardenia, I remember that my Grandmother hated them. To her, they were the smell of death. Because their strong, sweet aroma veiled the stench of death, they were used at wakes and funerals. To her, it was like anti-aromatherapy. I guess when she smelled them, she was taken back to sad times—in the same way that when we smell vanilla, we are taken back to our mothers’ kitchens.

One of my favorite flower aromas around here is purple lilacs. Those we can’t grow in Georgia because it’s too hot and sticky there for lilacs to thrive. My father tried a hybrid variety that promised success in their grow zone. They lied. It is a pretty bush, but no lilacs. Here in the Appalachian mountains, our lilacs were bitten by a late snow and even later freeze this year. Suffering from lilac withdrawal, I went out and bought myself a lilac candle.

I look up at the night sky and try to remember where in the big, upside down, black bowl I can find the constellations. That’s what some ancients believed, that there was a big upside down bowl encasing our flat earth. I totally get why they’d think that. That is what it looks like from where I’m standing. Didn’t I read that Jupiter was supposed to be visible this month, close to the moon? I seek, but do not find. Would I know it if I saw it? Eh, guess not. The sheer volume of stars that you can see when you are away from light pollution is breath-taking. I mean, it really takes your breath away. I look up there, so vast. So much. So grand. I look down at my feet. Big sky. Little feet.

And on those feet are my faded pink crocs with a fuzzy liner. Comfort before beauty. Good lord, I wouldn’t have been caught dead in these five years ago, even alone at night. Perspective.

I remember the quote, happiness takes courage. At that time, I don’t remember who said it, but I do think about the sentiment it contains.

Blue comes running back, and we head inside.

I put on a pot of coffee. Why even try to find sleep? Why pretend?

Instead, I accept the truth that I’ll be tired all day.

Not so with Blue, who curls up in his favorite chair. In no time at all I feel a little jealous when I hear his quiet snoring.

I light my lilac candle, open my computer, and work on my courage to find happiness.

Until next time, Friends, savor the flavor of life,

(okay, I guess I have to add a photo. this is a blog post afterall. I can’t find one of the moon, so about this one? Me on a friend’s horse, Andre the Giant, on a cold winter’s ride in NC.) 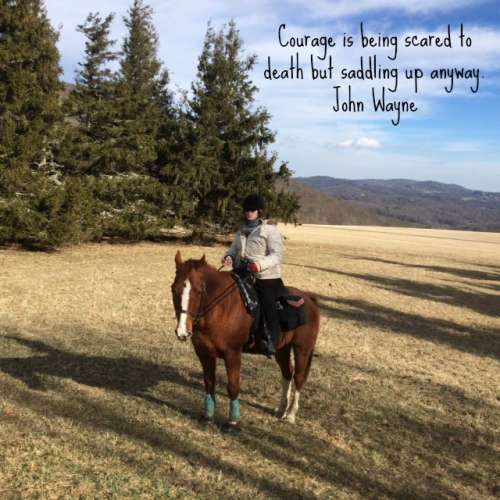