Living in the Round: Getting Better All the Time

I think we’ve done it. We’ve surpassed that hump of “are we completely insane?” and “I wish we had never done this.” It is a good feeling. This progress into being a pseudo home-owner has progressed much like any good Shakespearean dramatic plot structure. We began with the feeling of “a yurt would be super cool.” We progressed to late yurt arrival, into constant rain, into being broke and annoyed, into being nearly smoked out of our new home. The rising action was nearly unbearable until…until we reached the climax of getting our chimney and rain cap checked out. I was about ready to throw in the towel, to be honest. I was about ready to move into some boring apartment with stained carpet, a funny smelling fridge and a postage stamp sized dog yard.

Now, we have tentatively entered the denouement. The possibility of yurt life for this coming winter doesn’t seem so unlikely or doubtful. It’s getting better all the time… 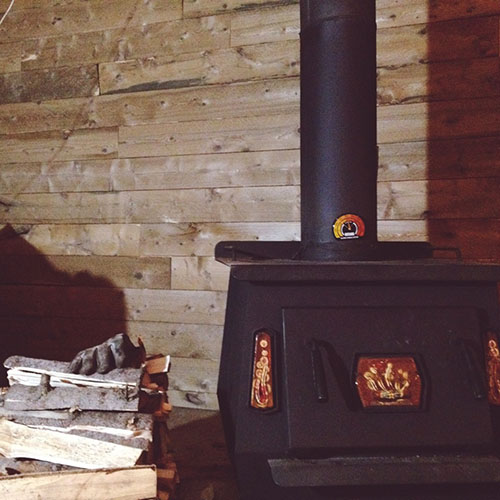 A finished wall for the loft, a nicely stacked pile of wood and a woodpile that warms rather than smokes make this Farmgirl a happy camper.

The downhill spiral began to accelerate right before my last posting. The wood stove that we had (and that I had been asking for advice about) was not cooperating with me. I was getting smoked out of the yurt, and it felt very unhealthy to be in there while pregnant. Furthermore, every single thing I owned smelled like it had come directly from a bonfire..or had steeped in some lapsang souchong tea. These scents are good in their place and time, but the constant smell of bonfire was a constant reminder of my cold and smoky living quarters. Luckily, I just stayed at Spring Creek Farm in an extra bedroom for a few nights to stay warm and have clean air to breath.

When Evan returned from work training, we were set on getting the stove back in working order.  First of all, I discovered that the damper had broken and was in a constant state of shut–A-ha! We must have solved the problem! Nope…this did little to nothing. Next, we invested in High temperature Furnace cement and applied it (very liberally, I might add) to any and all spots that smoke was leaking or could possibly leak. This was the most frustrating thing EVER! Even after lathering on layers and layers of this stuff as if our stovepipe was a cake in need of frosting, there was STILL smoke escaping from the joints. We were at our wits end. We purchased a creosote sweeping log and it didn’t even burn. Finally we decided to sweep the chimney, even though visual inspections from the bottom weren’t very bad.

Evan and Caleb getting ready for a roof expedition.

I really wanted to do the chimney sweeping, but being pregnant got the best of me, and I followed everyone’s desires and stayed on the ground (well…mostly). I did set up a slack line above the yurt using a ladder. This was used as an anchor for Evan’s friend, Caleb, to help sweep the chimney. You see, the roof of the yurt is at a fairly steep pitch, and because of the slick vinyl surface, it is slippery! So, we got him outfitted in our climbing gear. Used the slack line anchor to hold a rope and Evan belayed Caleb up on the roof. Evan would have done it, too, but he’s a big dude.

Evan checks out the rain cap and spark arrester.

Once he made it to the chimney, Caleb could see at once what the problem was. Our spark arrester was completely clogged with creosote and flying wet wood debris. The smell was terrible. We removed the arrester and threw it away. This fixed the stove immediately! Luckily, the spark arrester isn’t a necessary component, and we haven’t noticed any wayward sparks.

I put on my handy dandy face mask to clean the creosote from the rain cap…I didn’t get too far before Evan volunteered to finish the rest!

Caleb was also kind enough to sweep the chimney. The creosote buildup was minimal, which was both surprising and refreshing! I figured the rain, wet wood and week of smoldering fires would have caused more creosote buildup, but it didn’t!

With the chimney clean, the stove works like new again. Now, we are just getting used to how to make sure the yurt doesn’t get too hot! It’s a refreshing problem to have.

Also, with the stove working, we’ve been able to move onto less imperative things–like interior design. We have built the loft in the yurt and Evan just finished putting up the wall paneling today! It looks amazing. 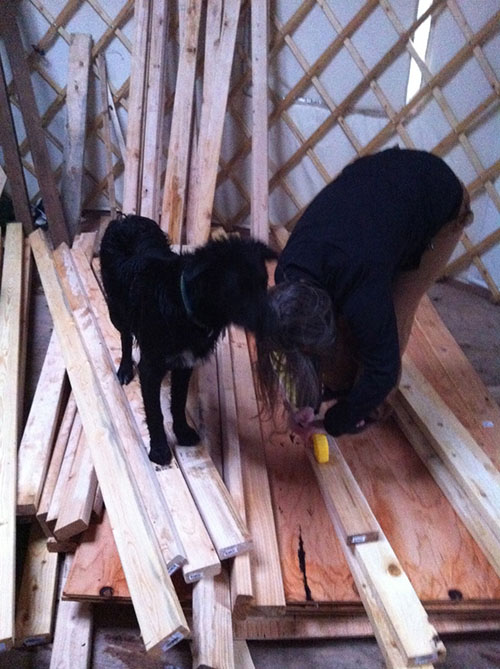 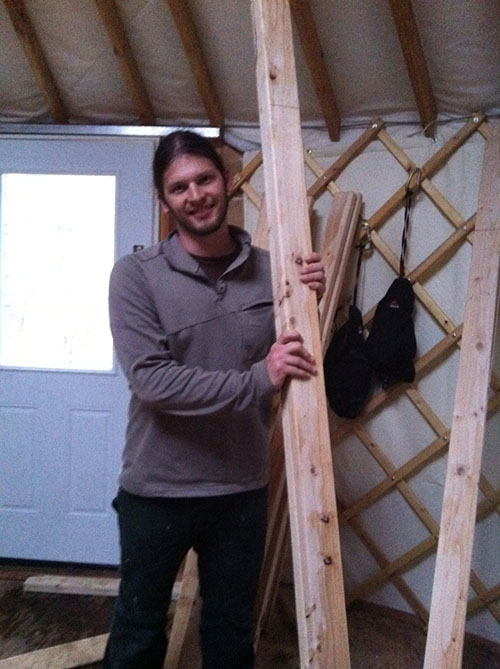 Evan is the master cutter. 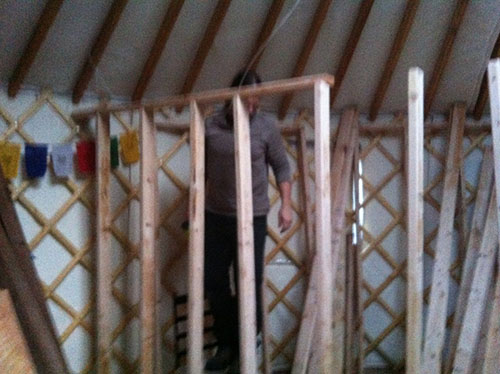 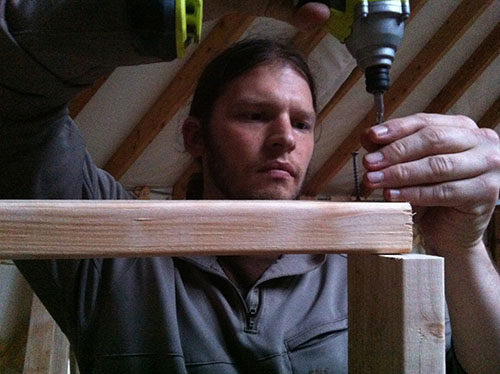 Just this afternoon, Evan put up all of the paneling we had stained with natural wood stain. We dissolved steel wool in vinegar and brushed it onto the rough cut, local lumber we had procured a few weeks ago. The interior wall of the loft looks fantastic (as seen in the first picture)! It looks even better than I had imagined it would.

The stain oxidizes the wood, so the color emerges as it dries over several hours

Evan finishing the wall! Note: we are still living out of boxes…but it’s okay.

So, yurt life is getting more and more like life. I think that one of the best things that has come of the last week or so is the ability to cook our own food again. We were eating almost one meal out every day because the stove was such a hassle. Either we were smoky or we were cold or both…Now I have been preparing a lot of food directly on the stove’s top, and it has been great. While eating out is fun and delicious, when it is nearly a necessity it can get old. Also, as a pregnant lady, I had some very particular cravings that the restaurant selection in our Alaskan town could not satiate. 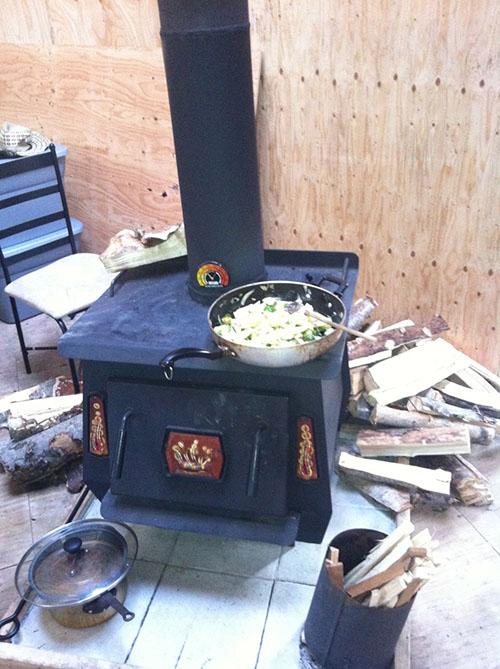 Cooking a late lunch on the old stove on a sunny afternoon. All of that light comes in through the dome! 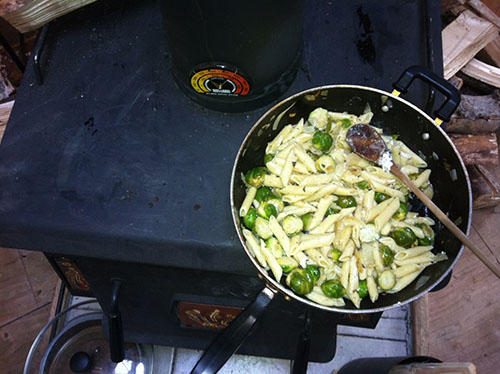 Mmm, mmm, mmm Brussels sprouts, onions, and herbs from the farm with organic pasta and chevre (just what the pregnant lady ordered).

Another dinner of soup and butternut squash ravioli! (My cravings have been pasta-centric.)

The yurt building continues, and the near end of building will come soon enough. For now, we are waiting on electricity and moving onto working on countertops, shelving, flooring, stairs up to the loft and some other interior design aspects. I will be sure to share more pictures and advancements with you next time! Let’s keep our fingers crossed that minimal snafus happen between now and then!