Living in the Round: Almost There

The day we had been waiting for–mostly patiently and largely excitedly–finally came on the evening (well, more like night, it was 10 p.m.) of Sunday, August 18. A beat up moving truck rolled into Matt and Amanda’s driveway and out stepped a dreadlocked man named Georgie and his lanky partner, whose name escapes me (maybe Seth?). They were the bearers of our new living abode, our very own yurt; and they were only 48 days late.

A Farmgirl and her Almost Yurt!

So, amongst those 48 days, there must have been 39 days of gorgeous, bluebird sky weather. This kind of weather is an anomaly in Alaska, but had been welcomed by all for the entirety of the summer. For the last four days of those 48 days, it had steadily rained in Southcentral AK, and this trend has continued–with about three days free of rain out of the last 10. Setting up our new home has been slightly damp, to say the least.

Evan and I started with building the platform for the yurt in the first weeks of August. This was a fun adventure for us in basic carpentry. We decided we made good partners because neither of us really knew anything. Like any good Farmgirl, I did my fair share of research about basic carpentry techniques, and I’ve learned some lingo. I must admit that I am no carpenter, however. I’m awful with an electric drill, and, being pregnant, am fairly useless when it comes to carrying heavy loads. However, my strengths lie in measuring twice, making sure floors are level, angles are accurate and circles are perfect. I’m also not too shabby at reading and executing directions (but others who are following those directions may disagree). It’s these kinds of simple projects that really make me appreciate paying attention in geometry and trigonometry in my younger years (is there a Farmgirl badge for putting math to practical use?). After many trips to Home Depot and a lot of help from our friends, the yurt platform was finished on August 19; and the yurt raising began!

Putting on the plywood flooring

Many friends and colleagues came to help with this process, which made the whole thing go much quicker than we could have anticipated. A few of Evan’s work buddies came up from Anchorage–one bearing a nail gun, wonderful table saw and years of experience to help show us the ropes. The other helpers were folks from Spring Creek Farm who came over after a long day of working to help raise the walls and roof of our soon to be home.

Scaffolding on the finished platform

First, we erected the latticed walls. These unfolded like a huge accordion around the perimeter of the platform. It was a good thing we had ten of us to take on this feat. Who knew that there could be so much tension in an accordion? We eventually got it all stretched out after some good teamwork and communication and we were ready to move the compression ring up on the twelve foot scaffolding that had previously been made and start putting in the rafters. Some more math and counting came into play here as we had to make sure that the rafter placements coordinated with their spaces on the lattice as well as the spaces on the compression ring in the center of the yurt.

Lattice before the unfolding

Finishing up the rafter installation.

Did I mention that the instructions that came with the yurt were awful? They are some of the worst instructions I have ever followed. I spent my childhood years putting together elaborate Lego masterpieces for my brothers (all they wanted to do was play with the finished product) and doing small carpentry projects with my dad. In college I was the one who helped put together pre-fab dressers with my roommates and fixed the leaky toilet. There were always simple instructions to follow for these things. To me, a yurt is just a larger version of a Lego pirate ship–it should come with straightforward, easy to follow, labeled instructions. We weren’t building this thing from scratch or anything. But no, the instructions seem to be written by someone who has spent too much time in enclosed spaces sniffing wood glue or something noxious. They are paragraphs and paragraphs long with very important aspects left out. Needless to say, we had to make quite a few phone calls to Georgie for clarification. I recommend a new instruction writer for future versions.

Anyhow, after getting the rafters in, Evan jiggled the compression ring about to get all of the parts equally spaced, and we were ready for the cover and insulation! The next day, Evan, our friend Gil, and I put on the roof. I am so grateful that Gil was there, it would have been impossible without him. Vinyl is really heavy when rolled up, and we had to lift it 13 feet in the air in order to unroll it on the roof. It seems especially heavy in the rain, too.  After a few short hours, the roof was on, and the rain had started again, so we decided to put off installing the walls until later. Plus, that evening we had a flight to Washington State for Evan’s brother’s wedding. We just put up the walls two days ago, and now we’re just waiting on installing the door and placing the dome on the roof (a tarp is covering up the huge hole in the middle, for now). 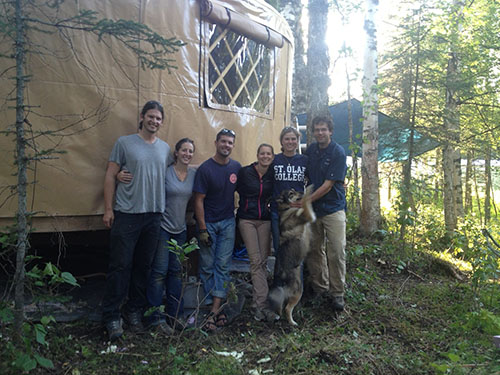 The finishing crew in front of a freshly walled yurt!

Moki has had enough yurt building for awhile.

We are leaving for another wedding tomorrow, but hopefully the yurt will be completely finished next week and we will move in. The settling process will be long, as we slowly accumulate the things we need like electricity, a fridge, a wood stove, and a cooking range as funds and time allow. To be honest, Im not very much looking forward to this transition phase. It might have been fun to live a camping-like lifestyle in July, but doing it in rainy and cold September sounds like a drag. Oh well, it will be done eventually, and then we can start living life normally again, just in time for a new baby!

August was a busy month–Evan was gone for the last part of July and the first part of August at a conference in Salt Lake City, my friends visited the first week in August, and we have had two destination weddings to attend (and Evan is in the bridal party for both!). It was not the ideal month for our yurt to arrive. However, it’s better late than never! It will be a beautiful and cozy living space once it’s complete and we’re settled in. I can’t wait to share more photos with you in the near future!

Until next time my fellow Farmgirl Sisters,